You have permission to edit this article.
Edit
Home
News
Obituaries
Sports
Opinion
Classifieds
Jobs
Digital Access
Share This
1 of 8 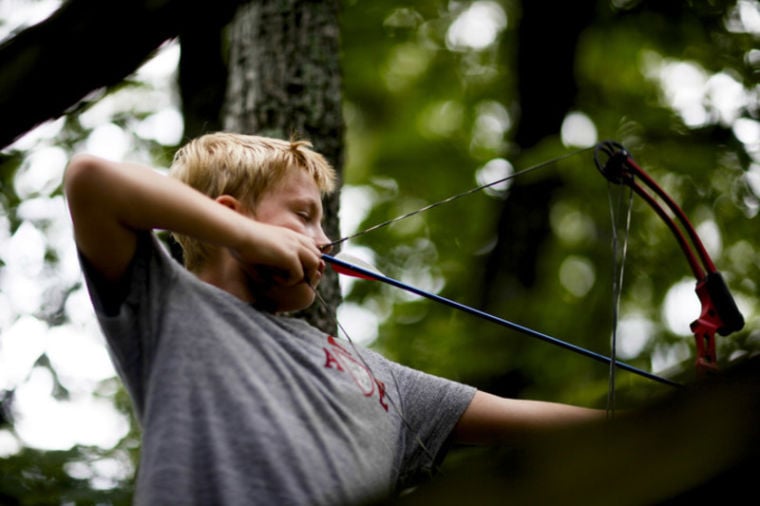 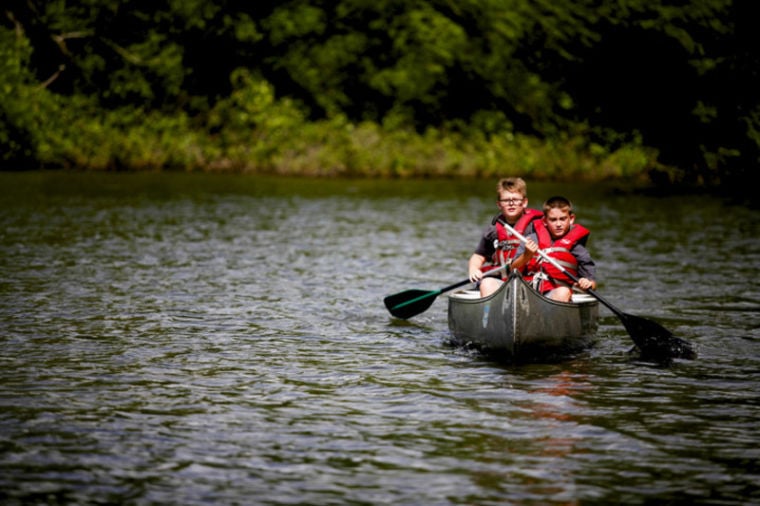 Aidan Compton (left) and Lance Burton, both 9-years-old and from Bowling Green, paddle a canoe back to shore on July 2, 2014, at Camp Currie in Benton, Ky. (Austin Anthony/Daily News) 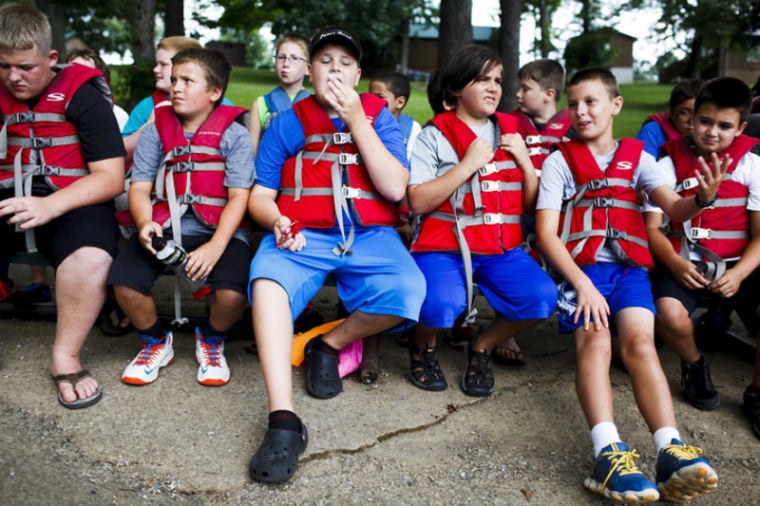 A group of boys from Bowling Green listen to boating instructions before they took to the water on July 2, 2014, at Camp Currie in Benton, Ky. (Austin Anthony/Daily News) 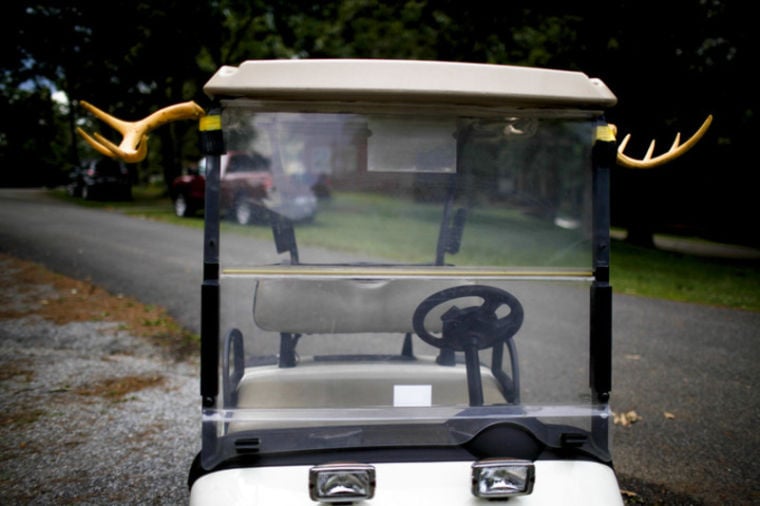 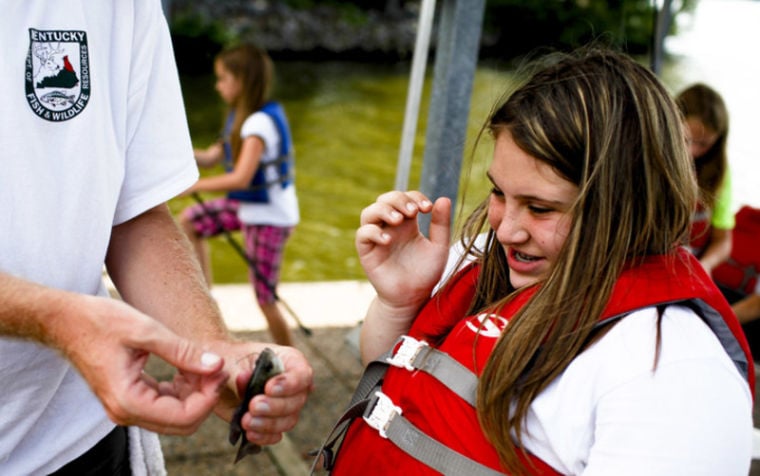 Kassidy Watt, 12, of Bowling Green, looks at a fish she caught on July 2, 2014, at Camp Currie in Benton, Ky.(Austin Anthony/Daily News) 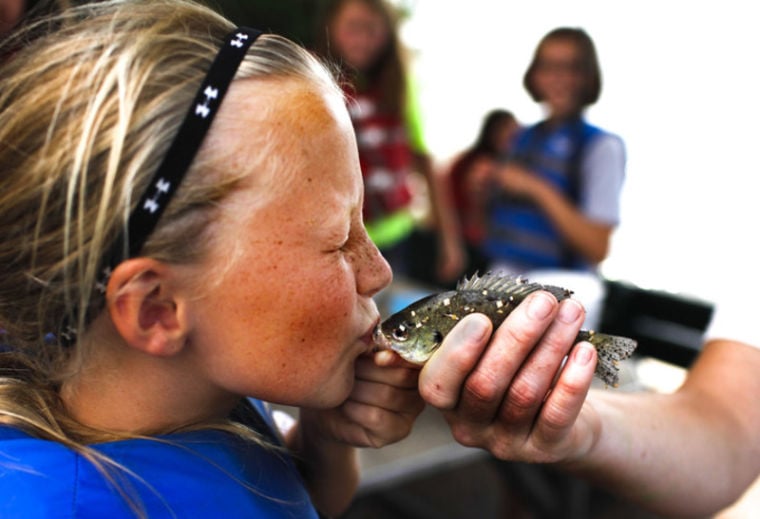 Ella Knois, 10, of Bowling Green, kisses a fish that one of the other campers caught on July 2, 2014, at Camp Currie in Benton, Ky. Camp Currie has a tradition of kissing the first fish you catch at camp. (Austin Anthony/Daily News) 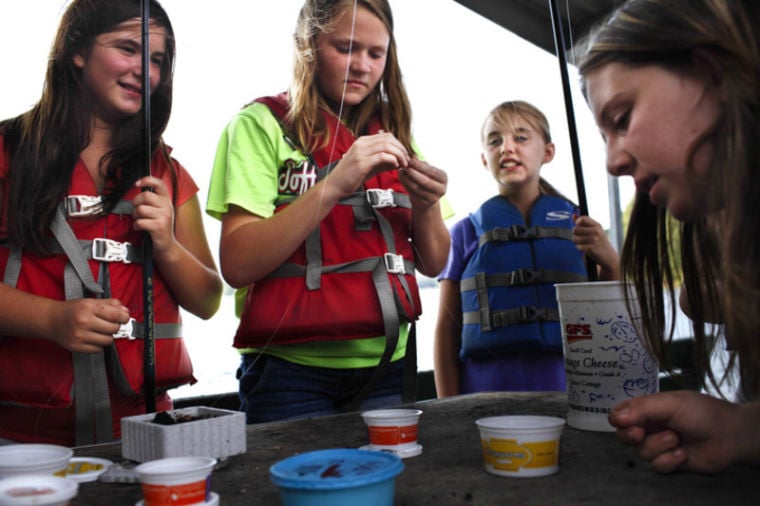 Girls from Bowling Green place bait onto their hooks on July 2, 2014, at Camp Currie in Benton, Ky.(Austin Anthony/Daily News) 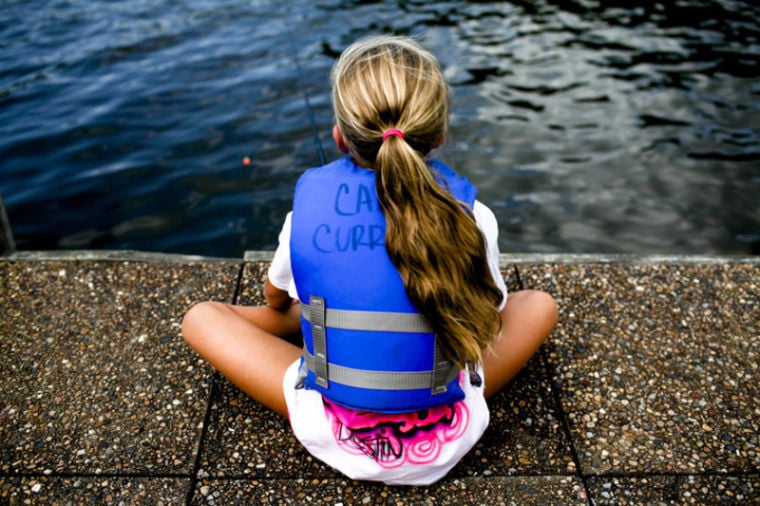 Aidan Compton (left) and Lance Burton, both 9-years-old and from Bowling Green, paddle a canoe back to shore on July 2, 2014, at Camp Currie in Benton, Ky. (Austin Anthony/Daily News)

A group of boys from Bowling Green listen to boating instructions before they took to the water on July 2, 2014, at Camp Currie in Benton, Ky. (Austin Anthony/Daily News)

Kassidy Watt, 12, of Bowling Green, looks at a fish she caught on July 2, 2014, at Camp Currie in Benton, Ky.(Austin Anthony/Daily News)

Ella Knois, 10, of Bowling Green, kisses a fish that one of the other campers caught on July 2, 2014, at Camp Currie in Benton, Ky. Camp Currie has a tradition of kissing the first fish you catch at camp. (Austin Anthony/Daily News)

Girls from Bowling Green place bait onto their hooks on July 2, 2014, at Camp Currie in Benton, Ky.(Austin Anthony/Daily News)

Ella Knois pried the worm off the end of her fishing line and fastened the hook to a rubber band wrapped around the base of the pole.

“It keeps it from flying around,” she said Wednesday. “So it doesn’t stick you.”

The Alvaton fifth-grader tossed the worm into the lake behind her and trotted off the dock.

Farther down, Kassidy Watt, 12, of Bowling Green, slowly reeled in her line. When the empty hook popped out of the water, she smirked, declaring she was right: A fish took her bait.

More than 100 children from Warren and Allen counties rode the bus Monday to Camp Currie, a summer camp for fourth- through sixth-graders hosted by the Kentucky Department of Fish and Wildlife. For a week, campers were tucked away in the woods around Kentucky Lake and challenged to pick up rifles, paddles, rods and bows.

For five days, they set aside parents and technology to connect with nature.

On the lake shore, 28 boys in life jackets waited for directions. Three of them examined a bright green caterpillar they found on a shirt sleeve. They joked and shoved until a waterfront instructor told them to settle down.

At her prompting, they recalled the seven-point safety check they’d have to perform to earn their boating patch. Many campers like this activity best because they operate the boat themselves.

Each boy sat in the back of the boat next to the motor and an adult. The adult wears a kill cord.

“I always tell them it’s a ‘don’t kill me’ cord,” said Nancy Kiernan, a conservation educator for the fish and wildlife department. Disconnecting the cord kills the engine, keeping some adult control over the small watercraft.

Meanwhile, away from the water, a line of campers wearing orange vests and holding unloaded rifles prepared to cross a road on a simulated hunting trail. They stopped, opened the gun action and crossed the road because “there’s always a chance you could drop it,” Kiernan explained.

Camp is an important recruiting tool for the fish and wildlife department, which relies entirely on license and equipment sales to fund its endeavors. It’s part of the conservation education program started in the 1940s, which puts educators in classrooms multiple times each year to teach fourth- through sixth-graders about natural science and Kentucky sportsman laws and traditions.

Laura Burford, the fish and wildlife assistant director in charge of education programs, said Camp Currie and the two other camps like it in Kentucky provide space for kids to learn hunting, fishing and survival skills in a safe place.

Fish and wildlife camps across Kentucky attracted more applicants than usual this year, despite a harsh winter that obstructed school instruction and threw the camps’ summer schedule into chaos. Some kids have experience before they arrive. Many go to Camp Currie because their parents or siblings or grandparents did. Other campers had their interest sparked during classroom visits.

Despite the level of previous exposure, each camper enters a new world upon arrival. For most, it’s their first time away from home, Burford said.

“We empower kids to make their own decisions. You’re trying things on your own. ... It’s okay to try something where you didn’t know what to do. It’s essential to becoming a well-rounded adult,” she said.

The autonomy stretches from operating small motorboats to remembering to brush their teeth. But as much as their personal responsibility is called upon, so is their childlike fascination.

Kiernan said each night, around dark, when the toads come out and hop all over the grass and paths, the campers are amazed.

“Who cares if this dam’s built and it destroys something?” Fannin said. “But if they caught fish in the stream and felt the cold of the spring, they’re going to want to be involved in decisions in the community about whether that happens. ... To me, I think the big priority is getting them to care about nature.”

A 2006 study by Cornell University connected childhood experiences in nature to adult concern for and action on behalf of the environment.

“The results of this study,” it reads, “indicate that participation with ‘wild nature’ in childhood, such as walking, playing or hiking in natural areas, camping, or hunting or fishing, has a significant, positive association with both adult environmental attitudes and behaviors. People who engaged in these kinds of activities before the age of 11 were more likely as adults to express pro-environment attitudes and to indicate that they engaged in pro-environment behaviors.”

One after another Wednesday, campers said they love nature. If they were home, they would be outside, swimming, jumping on trampolines, riding dirt bikes, exploring the woods or reading in swings.

A few admitted they might be inside watching TV or playing video games – an activity much more associated with their age group. According to research by Nickelodeon from 2013, technology plays a larger role in children’s lives. This translates to them spending about 35 hours each week watching TV.

If they’re spending that much time inside, they aren’t outside. The Nature Conservancy says that affects their health and development.

One expert, author Richard Louv, goes as far as to say that staying inside and overstructuring play time have contributed to behavioral, cognitive and health problems among children. In his 2005 book, “Last Child in the Woods,” Louv coined the term “nature deficit disorder” – which is not a recognized diagnosis – to describe the cost of separating people from nature.

“Time in nature is not leisure time; it’s an essential investment in our children’s health,” Louv wrote. Studies indicate time spent in nature reduces symptoms of Attention Deficit Hyperactivity Disorder. Kids who spend significant time outside are more creative, independent and peaceful, according to Louv.

Parents get this. A recent survey by the Nature Conservancy found that a majority of parents – 82 percent – believe time spent outside is good for their child’s development. They also believe time spent in nature leads to better classroom performance. Nevertheless, an American 16-year-old likely spends fewer than seven hours a week outside.

Fannin enjoys teaching kids with no experience in outdoor activities such as hunting or fishing because it pushes them to try something new. In his 26 years at Camp Currie, Fannin said “kids are softer.” They’re more homesick, they require more medication for allergies or attention disorders and they pine for air conditioning and video games.

“A lot more parents are homesick,” Fannin said. “It would be easier if it was just the kids.”

If the campers can push through, they’re likely to leave feeling confident and accomplished, Kiernan said. Throughout the week they learn skills they will be tested on later. If they pass, they earn a patch. By the time they go home, they have satisfied criteria to earn their hunter safety card and junior sportsman license. On top of the awards, they likely did something they never thought they would do.

“Sometimes homesick kids have the best week of their lives,” Kiernan said.

Clay Brummal, a conservation educator who visits schools in Warren County and the counties that surround it, said the program “builds on itself,” because campers realize their enthusiasm for the outdoors once they get out of the classroom.

Camp attracts kids with rural backgrounds and without, but Brummal said it makes no difference. “Kids are interested in this. That crosses all counties.”

Dawson Oliphant, 10, stood straight with his bow drawn, aiming it at a target a short distance away. He flung one arrow after another into the center.

“He’s a shooter,” Kiernan said, pointing to his form and consistency.

Dawson, who attends Bristow Elementary, gathered his arrows and took his position farther from the target. He shot again, thrilled with the result.

“All mine hit the target!” he said. He’d learned archery while visiting cousins in Indiana, but doesn’t own a bow. His dad bow hunts, he said.

Archery has applications with hunting, but beyond the woods, it’s an Olympic sport. With that in mind, Kiernan said, kids who try it at Camp Currie and do well could discover an interest that illuminates their future. The same is true for those who will be conservation educators, go hiking on the weekends or just send their kids to the same camp they enjoyed.

“I hope that they go on ... and want to hunt and fish,” Fannin said. “I want them to have the same joy that I’ve had catching a fish. I want them to have that same experience ... of seeing nature and being out in the forest and seeing the deer and rabbits and even snakes – how they are a balance of nature and that it betters our life to see these kinds of things.”

After earning his archery patch, Oliphant explained why he likes to spend his time outside.