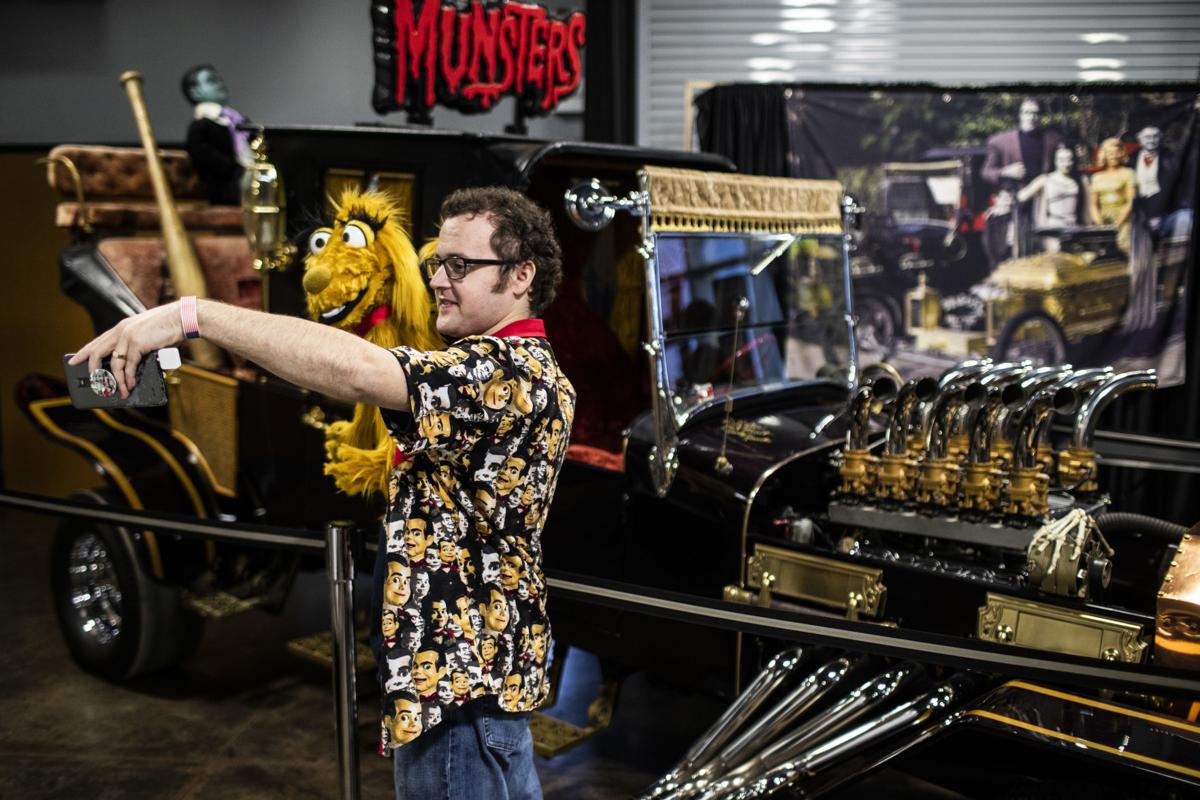 Puppeteer Avery Jones poses for a photo with his puppet Jax in front of the Munster's Koach car at Vette City Con 2020 on Saturday, January 25, 2020, at the National Corvette Museum. (Austin Anthony/photo@bgdailynews.com) 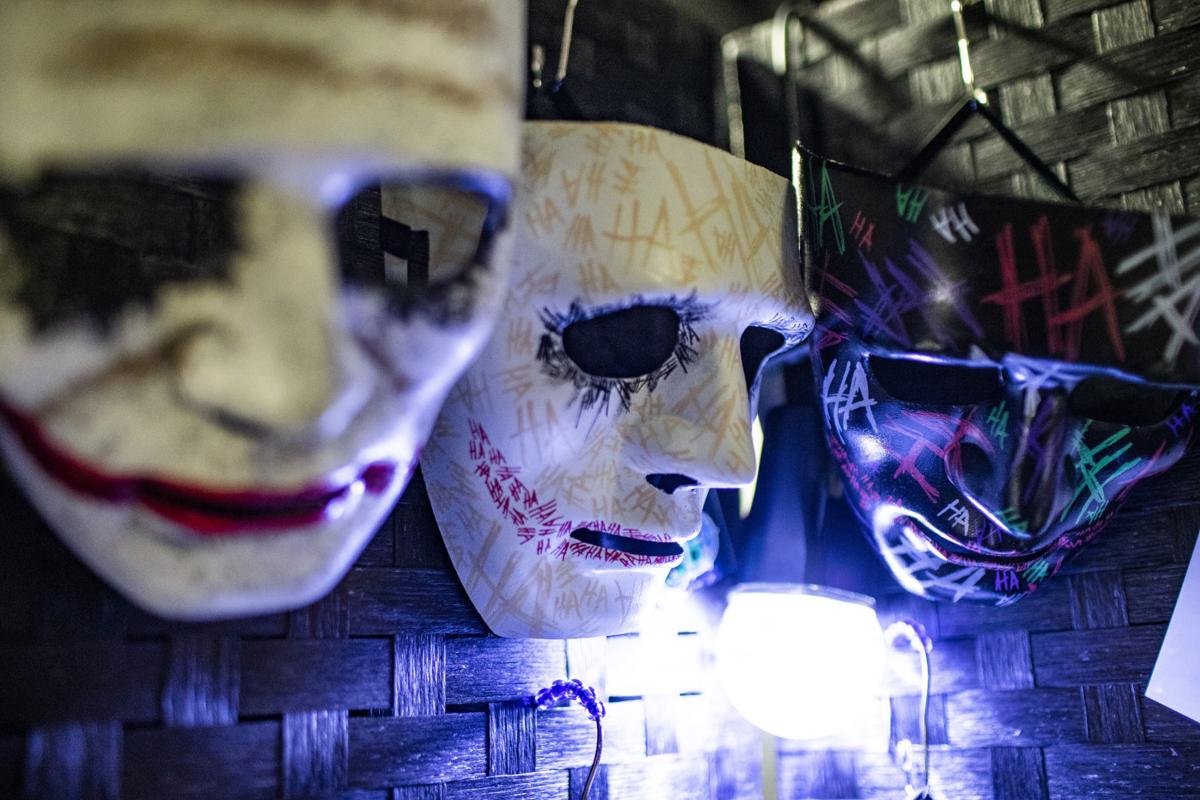 Masks painted by artist B. Good for sale at Vette City Con 2020 on Saturday, January 25, 2020, at the National Corvette Museum. (Austin Anthony/photo@bgdailynews.com) 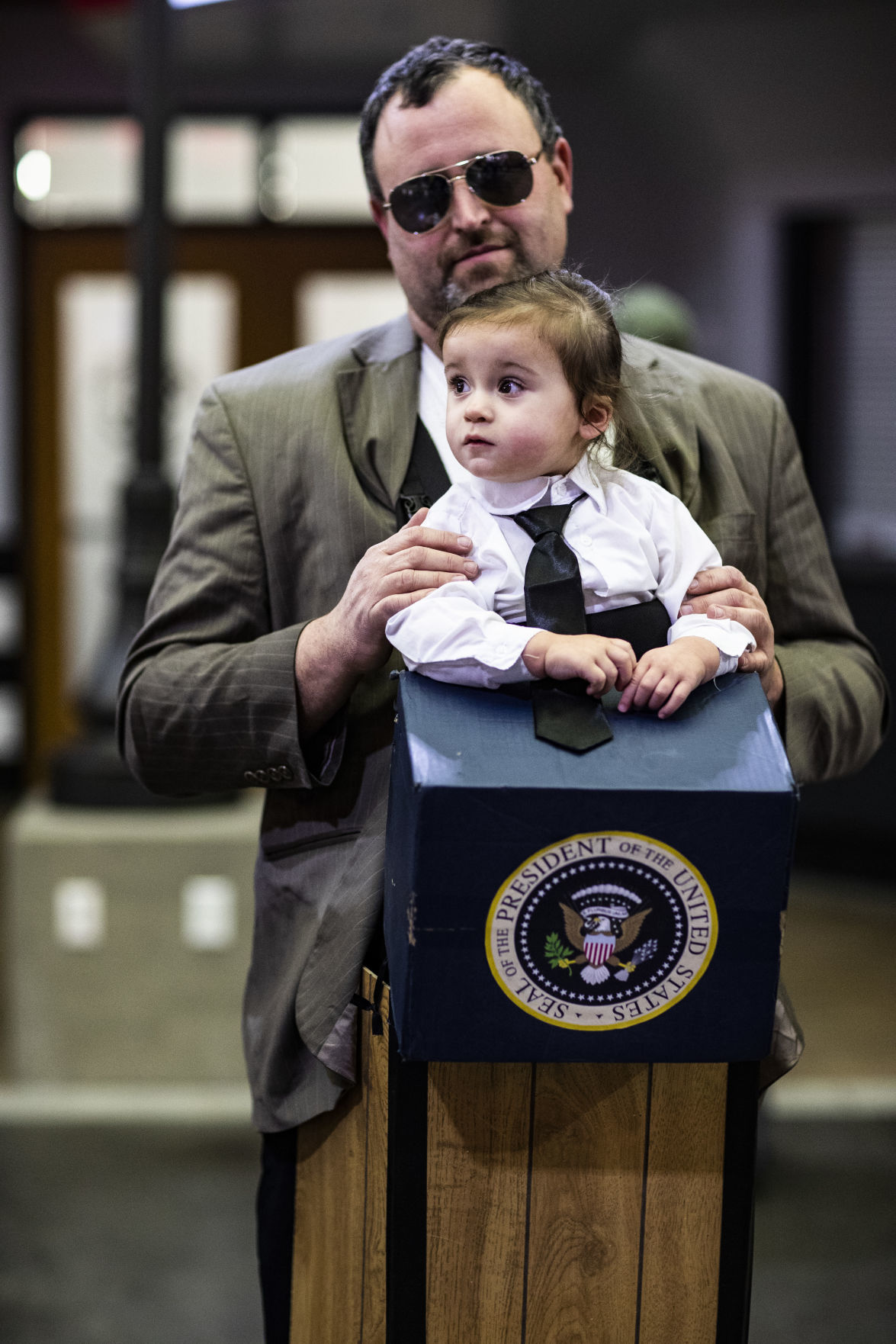 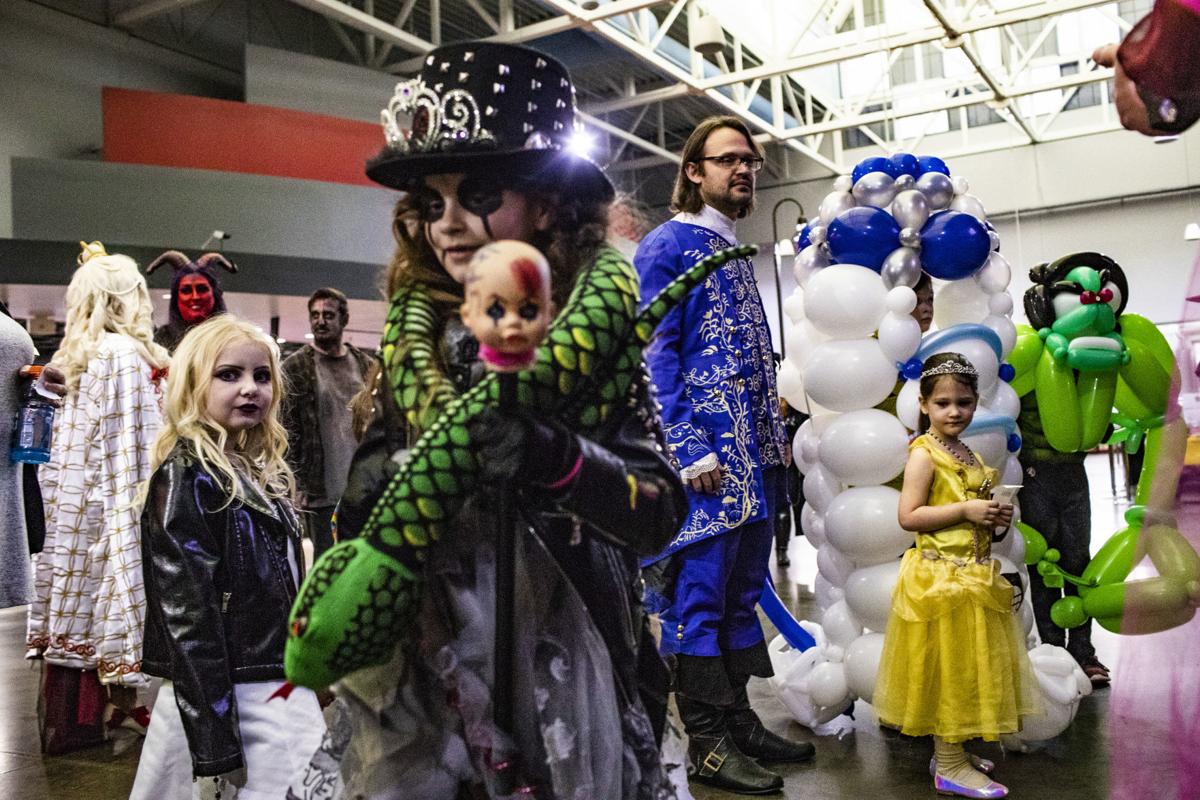 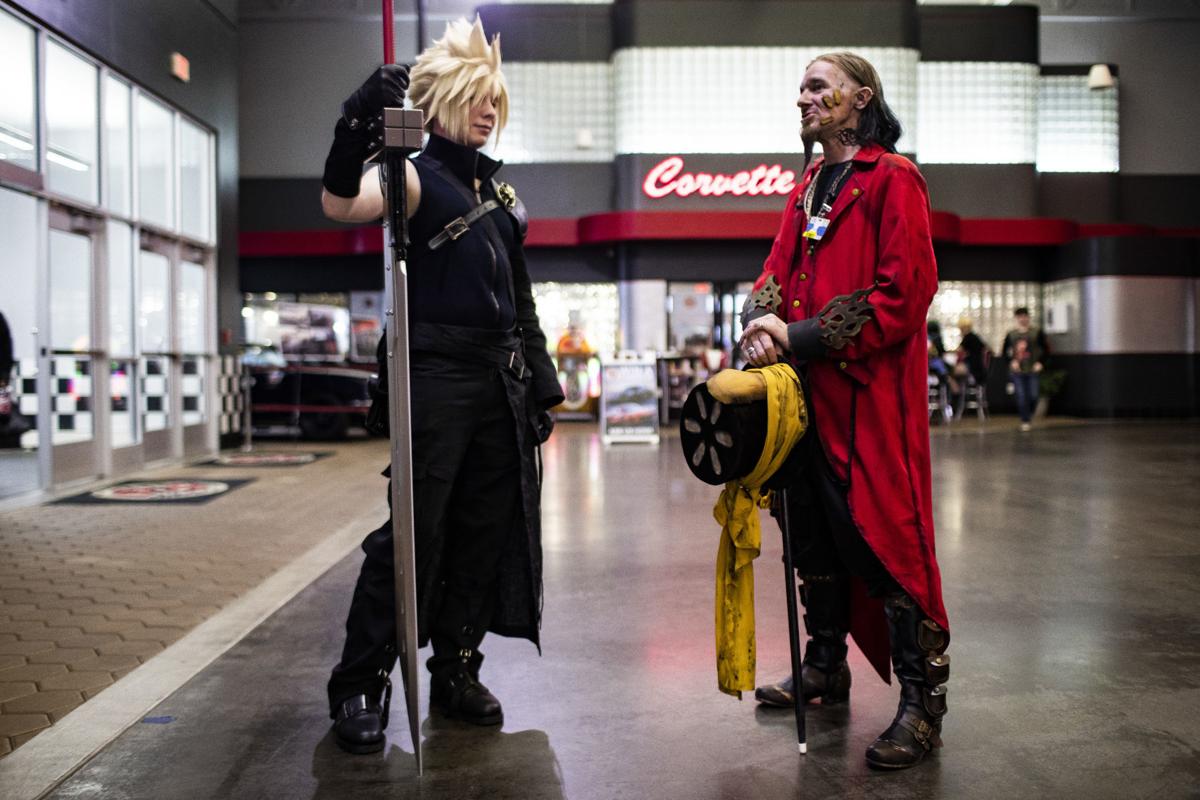 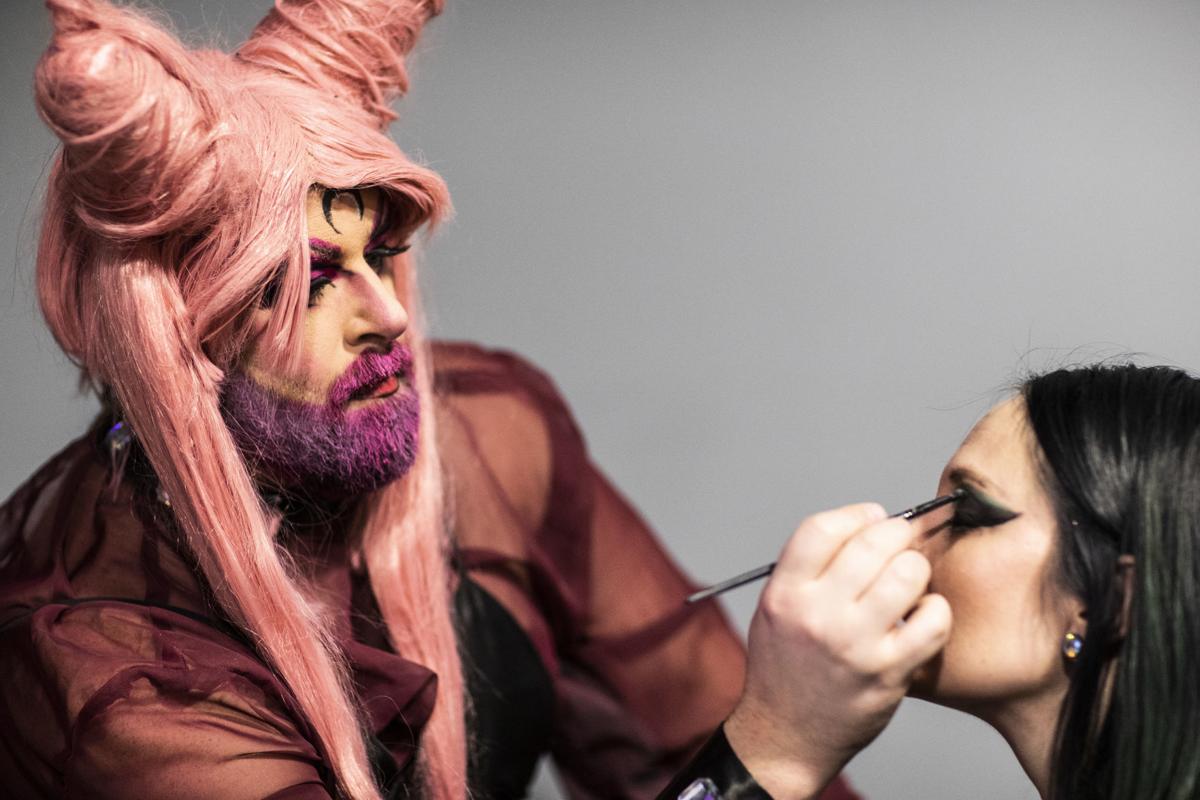 Bryan Patrick of Cincinnati dressed as Black Lady from Sailor Moon, does makeup for Heather Day of Louisville dressed as a Slytherin from Harry Potter at Vette City Con 2020 on Saturday, January 25, 2020, at the National Corvette Museum. (Austin Anthony/photo@bgdailynews.com)

Puppeteer Avery Jones poses for a photo with his puppet Jax in front of the Munster's Koach car at Vette City Con 2020 on Saturday, January 25, 2020, at the National Corvette Museum. (Austin Anthony/photo@bgdailynews.com)

Masks painted by artist B. Good for sale at Vette City Con 2020 on Saturday, January 25, 2020, at the National Corvette Museum. (Austin Anthony/photo@bgdailynews.com)

Bryan Patrick of Cincinnati dressed as Black Lady from Sailor Moon, does makeup for Heather Day of Louisville dressed as a Slytherin from Harry Potter at Vette City Con 2020 on Saturday, January 25, 2020, at the National Corvette Museum. (Austin Anthony/photo@bgdailynews.com)

Spider-Man could rub elbows with zombies, demons, light- saber-wielding Star Wars characters and Eddie Munster on Saturday as he strolled past comic book and pop culture vendors at the National Corvette Museum.

The fourth annual Vette City Con was a little taste of nerd heaven, whether you were dressed in a Spidey suit or simply browsing through the hundreds of comics, videos and games without the benefit of a wrist-mounted web shooter.

“This is really neat, and there are lots of interesting things,” said 31-year-old Roy Stubblefield of Bowling Green, who was attending his first Vette City Con.

“The comics are what I came for, but I like the atmosphere. Everybody is happy and smiling.”

Holly Crisler of Louisville, who sported horns and a devilishly red complexion as the cosplay (for costume play) character Lucy Phurr, beamed a smile that was more angelic than satanic.

“It’s fun,” said Crisler, who shopped for T-shirts, movies and jewelry between being stopped by those wanting a photo with her ‘Satan’s office manager’ character. “As kids, we used to play dress-up. Now we can do it as adults.”

Crisler said she and her husband regularly attend similar pop culture conventions, and she said there’s no shortage of opportunities. The comic-cons.xyz website, in fact, lists 16 conventions across the country this month alone.

“There are a lot of conventions in the area,” Crisler said. “I go to Indiana, Ohio, Kentucky. If they’re close by, I go. I’ve been to some that take up entire convention centers. This one is small, but for Bowling Green it’s good.”

Good enough to be going strong in its fourth year. Vette City Con organizer Chad Sheppard said the event was scaled back from two days to one this year, but he said that’s no indication that it’s losing momentum.

“The first year we broke even, and the second year we made money,” said Sheppard, who was charging $20 for admission Saturday. “The third year we lost money, so we scaled back a bit. I think we’ll make a little money this year.”

Sheppard, who lived in Bowling Green when Vette City Con debuted but now lives in Columbus, Ga., believes the event at the National Corvette Museum has a bright future.

“I hope to have it until it doesn’t make sense to have it,” he said. “I really like having it at the Corvette Museum. They really stepped out that first year when a lot of people were skeptical about it.”

It was hard to find doubters Saturday. From the cosplay-and-comics crowd to celebrity groupies, the event seemed to have something for everyone.

In addition to the many vendors and presenters, this Vette City Con brought in a celeb list that included Butch Patrick (Eddie Munster on the 1960s TV show “The Munsters”), actor Duane Whitaker (who played the pawn shop owner Maynard in the 1994 film “Pulp Fiction”) and actor Ken Sagoes (Roland Kincaid in the 1987 horror film “A Nightmare on Elm Street 3”).

Patrick was busy Saturday signing photos and posing for pictures, but he added more than a quick celebrity encounter to the event. He brought along a replica of the souped-up hearse called the Munstermobile and an escape game based on the Munsters’ 1313 Mockingbird Lane home.

“I like to take it up a notch,” said Patrick, now 66. “I like events like this. I enjoy meeting the fans, and they seem to enjoy meeting me.”

Likewise, Whitaker seemed to like his first time at Vette City Con.

“I do two or three of these a year,” said the 60-year-old Whitaker, who still works in Hollywood. “It’s kinda fun to get out of town and go places you’ve never been before.”

Having such stars of both TV and the big screen available along with the various vendors made Saturday’s Vette City Con a fun event for locals like Kendrick Strange of Bowling Green.

“I love seeing all the stuff here,” said Strange, who was carrying a coveted DVD in his shopping bag. “And I like seeing people who were in TV shows and movies. You see them in movies and then you see them in person, it’s a little different.”

Pop culture patrons like Strange should be able to enjoy Vette City Con for a few more years, according to Sheppard.

“We’ll do it until they tell me they don’t want it anymore,” he said. “And I think most of these people do want it. They’re walking around with smiles on their faces.”