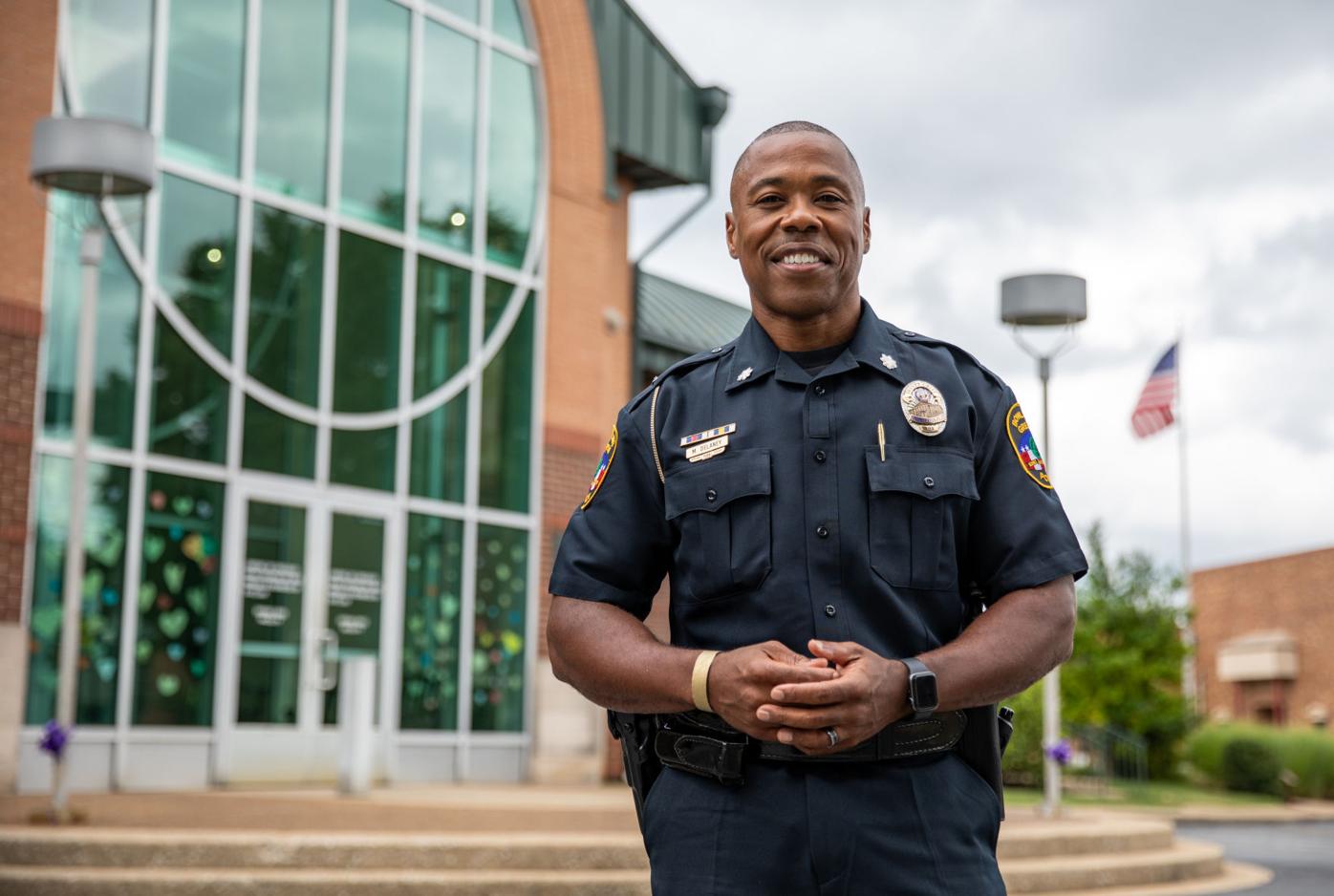 Michael Delaney stands outside the police department on Thursday after being named chief on Tuesday. Delaney, a 22-year veteran of the BGPD, succeeded retiring Chief Doug Hawkins as of midnight Friday, July 31, 2020. 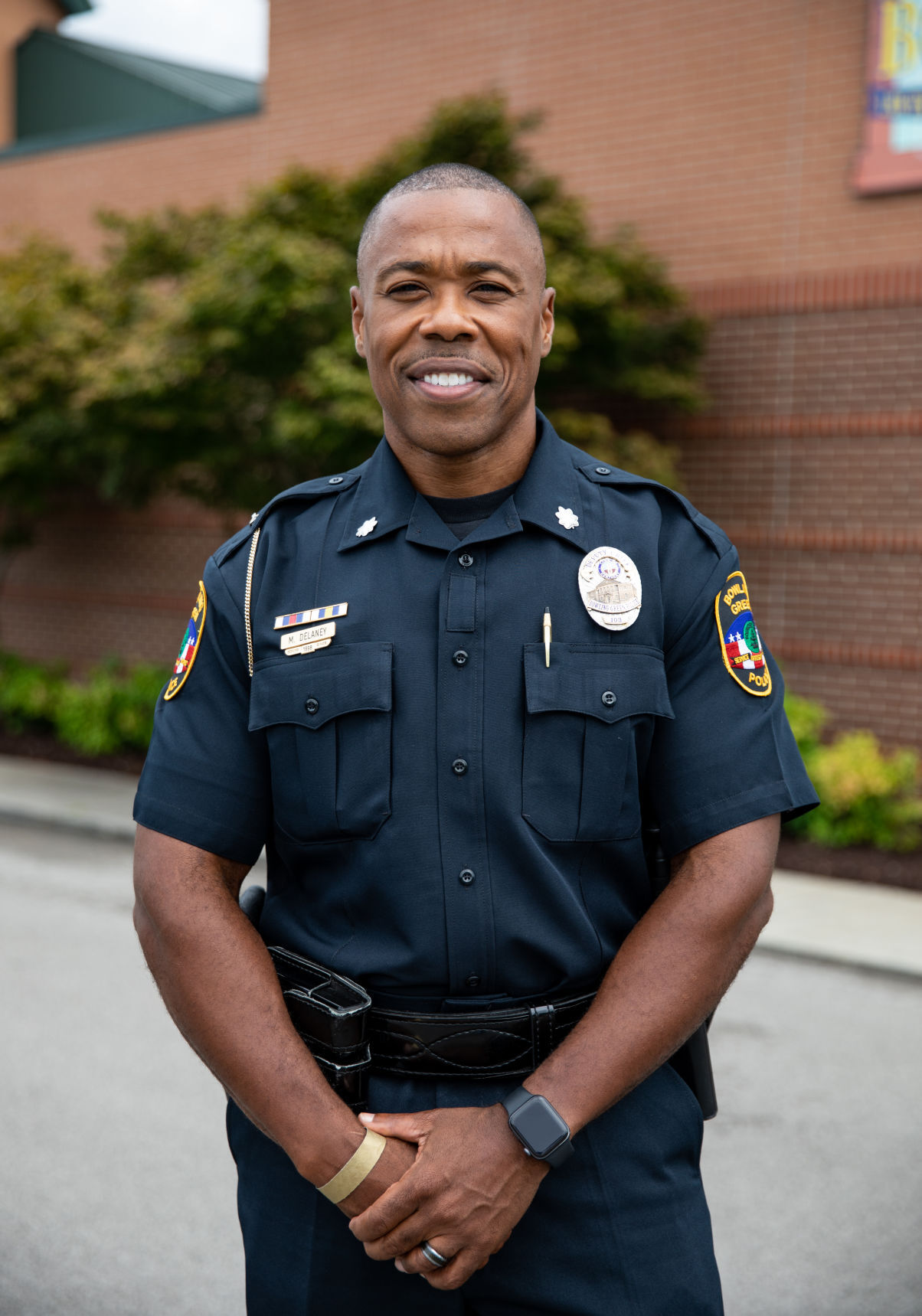 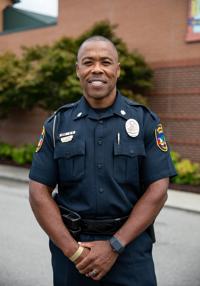 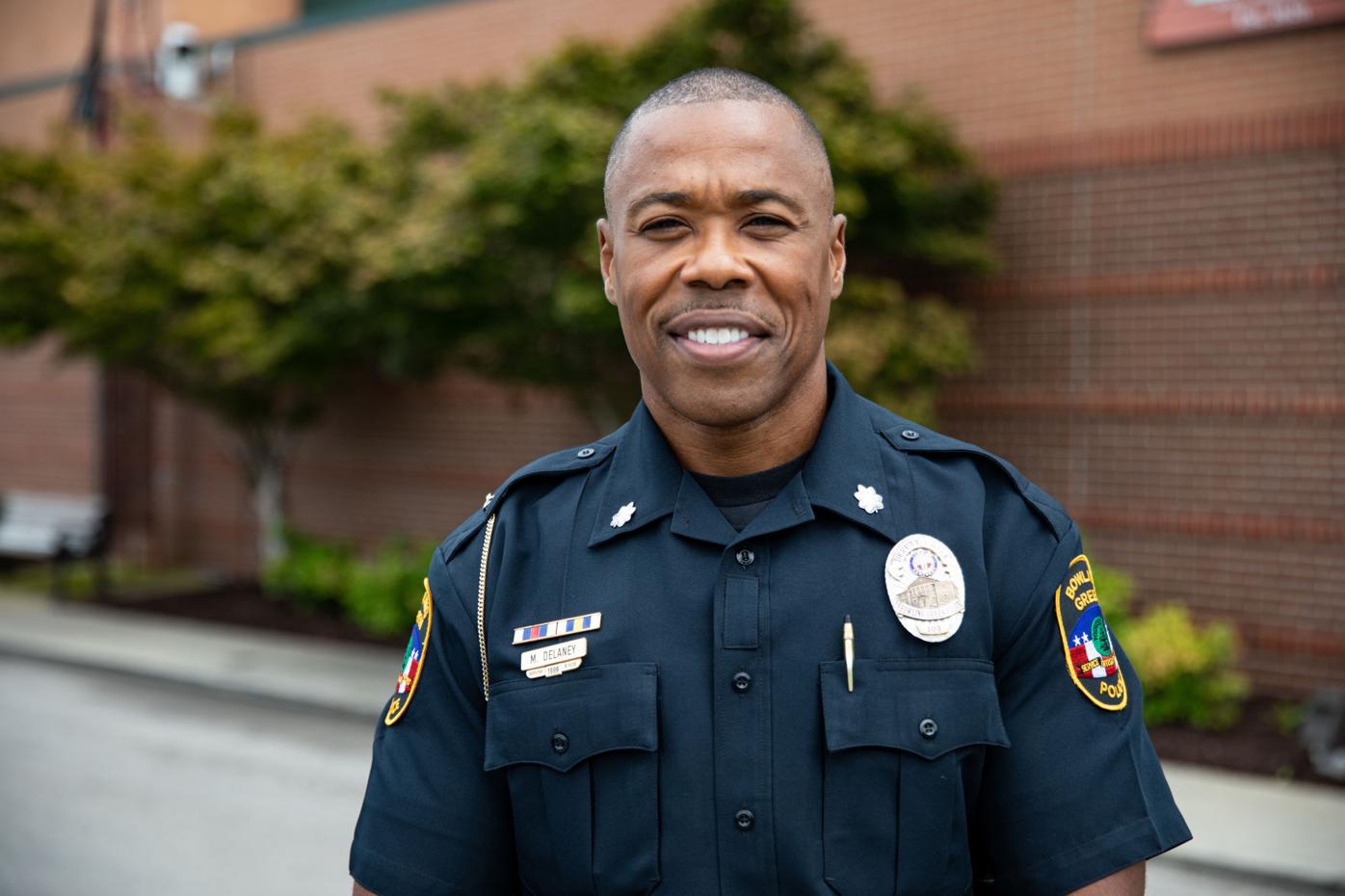 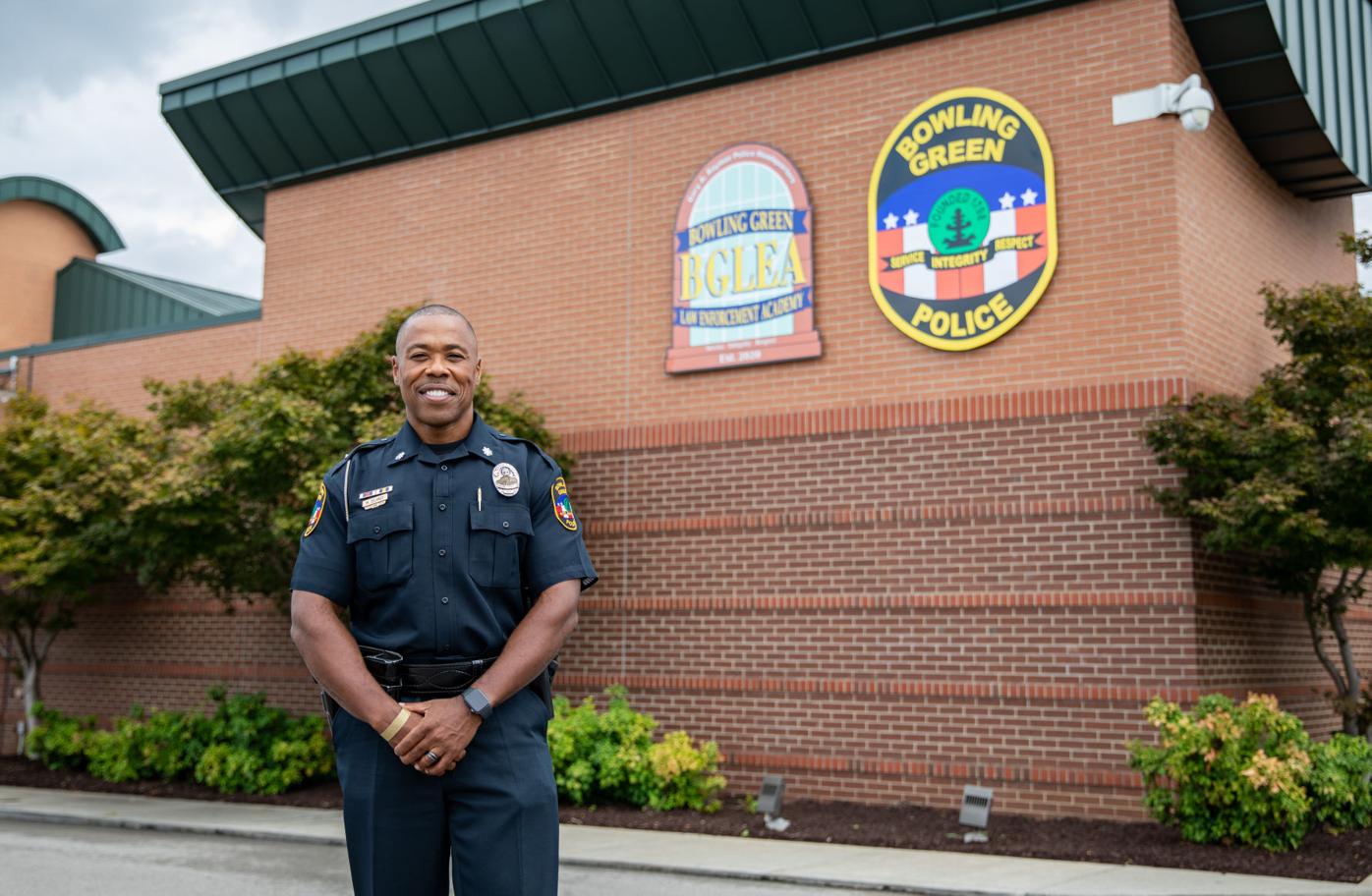 Michael Delaney stands outside the police department on Thursday after being named chief on Tuesday. Delaney, a 22-year veteran of the BGPD, succeeded retiring Chief Doug Hawkins as of midnight Friday, July 31, 2020.

In 1996, the man who became the BGPD’s newest chief Saturday first went through the application process in hopes of joining the agency.

For a would-be officer at the time, advancement through the process hinged on passing a written exam with a 72 percent score. Delaney’s test came back with a score of 71.

Stymied, he returned to his job at a Glasgow printing company and all but ignored the notice he got in the mail the next year about the BGPD’s next round of testing, thinking law enforcement wasn’t in the cards for him.

“My pride was in the way,” Delaney said at BGPD headquarters. “I was like, ‘If I go back and fail again, ooh, it’s going to be bad.’ ”

Right before the testing process closed, though, Delaney got a phone call from now-retired BGPD Officer Tom Forte urging him to give it another try.

Delaney remembers Forte telling him that he saw something special in the Bowling Green native.

He said, ‘You missed it by one point, don’t let that get you down,’ ” Delaney recalled Forte telling him. “I was nervous, but I came back, took the test and passed. It’s crazy how just that one phone call changed the course of my life.”

A 22-year veteran of the BGPD who rose to the top of the agency after the retirement of Chief Doug Hawkins, Delaney was approved as chief last week by the Bowling Green City Commission, emerging from a field of three applicants, all of whom are high-ranking BGPD officers.

Delaney nurtured an interest in law enforcement from childhood, when he first saw James “B.B.” Davis, a Kentucky State Police trooper who had moved into his neighborhood.

Davis was the first Black police officer Delaney encountered, and Delaney said watching the way Davis carried himself and interacted with the people in his community left a strong impression on him.

Now retired after a career with KSP and the Warren County Sheriff’s Office, Davis remembers Delaney as someone who may have been a bit in awe at first upon seeing him in his police cruiser and uniform.

They went on to establish a long-lasting friendship, Delaney seeing Davis as a mentor.

“I knew his mother (Barbara Clark) from way back, she was a single parent and she did an excellent job raising him and teaching him morals and values, and made him realize the importance of trying to get an education and being something in life,” Davis said.

When Delaney began to seriously consider going into law enforcement, he consulted with Davis about the potential benefits and drawbacks associated with the career.

“I told Mike that if he was serious about it, he needed to pursue it,” Davis said. “To be something in life, you have to center yourself around positive people, because negative people will do nothing to put you down.”

Delaney said he treasures another piece of advice he received from Davis – stay humble and stay grounded.

While he rose steadily through the ranks and earned several commendations from the department, including the Officer of the Year award in 2003, two Meritorious Service medals, a Life-Saving Medal and a Distinguished Medal of Service, Delaney said that he didn’t view becoming chief as an end in itself.

“With every promotion, I was able to influence and help the community more, so the goal ultimately was to get to a position where I could help the most people and have the best impact on the community,” Delaney said.

The new chief has been out in the community, taking part in a prayer event Friday at Mount Zion Baptist Church with other law enforcement officials and greeting well-wishers Saturday at the Garvin House.

Delaney’s influence has been recognized in a number of ways over the years, having been a recipient of the President’s Award for Diversity from Western Kentucky University, being inducted into Warren County Public Schools Hall of Distinguished Alumni and honored with a Trailblazer Award, given annually to Black residents of Bowling Green and Warren County who have contributed significantly to the community.

He has also volunteered at the local Boys and Girls Club, co-founded a local mentoring group for young men and served on the Martin Luther King Jr. Planning Committee.

The civil rights leader figures prominently in Delaney’s life – the chief offered two quotes from King during remarks he gave Tuesday after earning approval from the city commission as chief.

To congratulate Delaney for his promotion, a friend gave him a letter opener that King used as pastor of Dexter Avenue Baptist Church in Alabama.

As issues of race and policing have come to the forefront and sparked protests and calls for police reform in several U.S. cities following the deaths of George Floyd in Minnesota, Breonna Taylor in Louisville and others elsewhere, Delaney has been present at local demonstrations and been vocal in condemning the actions of the officers charged in Floyd’s death.

Delaney draws on King’s example while pledging to be transparent with the public about his department.

“I see myself as a voice for justice,” Delaney said. “Right is right, and I think sometimes in policing we have not spoken out when we realize something was wrong, hoping that we didn’t know all the facts to the story. I think sometimes we think, surely there’s no way that’s everything to it, but it was so evident and obvious with the George Floyd murder that there couldn’t be anything else to it. I felt compelled to speak out on that and I think a lot of law enforcement leaders across the country felt the same way because we don’t want that to represent us.”

Asked about how those incidents of violence and the subsequent demonstrations inform his approach to policing going forward, Delaney cited one of the most well-known quotes attributed to King: “Injustice anywhere is a threat to justice everywhere.”

“If you allow that injustice to go on there and you don’t speak out about it, it’s a threat to justice here and people in our community will lose support and trust in us if we don’t speak out on issues like that,” Delaney said. “When we make mistakes, I’ll be transparent about that as well as when we’re doing the right thing, and I’m standing behind my officers when we’re doing the right thing.”

Warren County Sheriff Brett Hightower worked alongside Delaney for several years in the BGPD, serving together on the agency’s critical response team.

Hightower remembers Delaney as an officer who could remain poised under pressure, whether that meant serving a warrant on a dangerous suspect, resolving a high-risk scenario safely or training outside in the heat or cold.

“He’s a dynamic leader, he’s got a great mindset of knowing what has to be accomplished and he’s driven to work hard,” Hightower said. “I think he’s going to be a really good leader for not only the Bowling Green Police Department but this community. ... Chief Delaney has always been able to keep a level head and is able to grasp what’s going on around him and let that soak in and make good decisions based on the information he’s received.”

Outside the department, Delaney’s interests include drag-racing motorcycles, exercising and watching his son, Miles, play sports.

Delaney considers himself blessed to be in the position he finds himself.

Going forward, Delaney said he hopes to incorporate advice he has gotten from Hawkins and former BGPD Chief Bill Waltrip while developing his own leadership style.

“I’m sort of an upbeat person, I would say I’m bubbly at times and a little outgoing, but there’s another side to me that understands we have a serious job to do here,” Delaney said. “I’m serious about work and serving the community, but I don’t take myself very seriously, if that makes sense.”

Delaney’s mentor, who provided the first spark of possibility that a law enforcement career was attainable for him, has faith in him.

“I never thought I would live to see a Black man being named chief of police here and see that come to fruition,” Davis said. “I’d put the Bowling Green Police Department up against any other police department in the United States. ... I’ve seen these officers perform their duties and they reflect their community.”

Davis was one of the first people Delaney contacted when he got word he would be named chief.

“Mike has done well on his own and he doesn’t need me to tell him how to be chief of police when I haven’t been chief,” Davis said. “The only advice I offered Mike was to stay strong, even when there are times of adversity maintain your strength and hold your head proud, and the community will look at you and feel proud.”