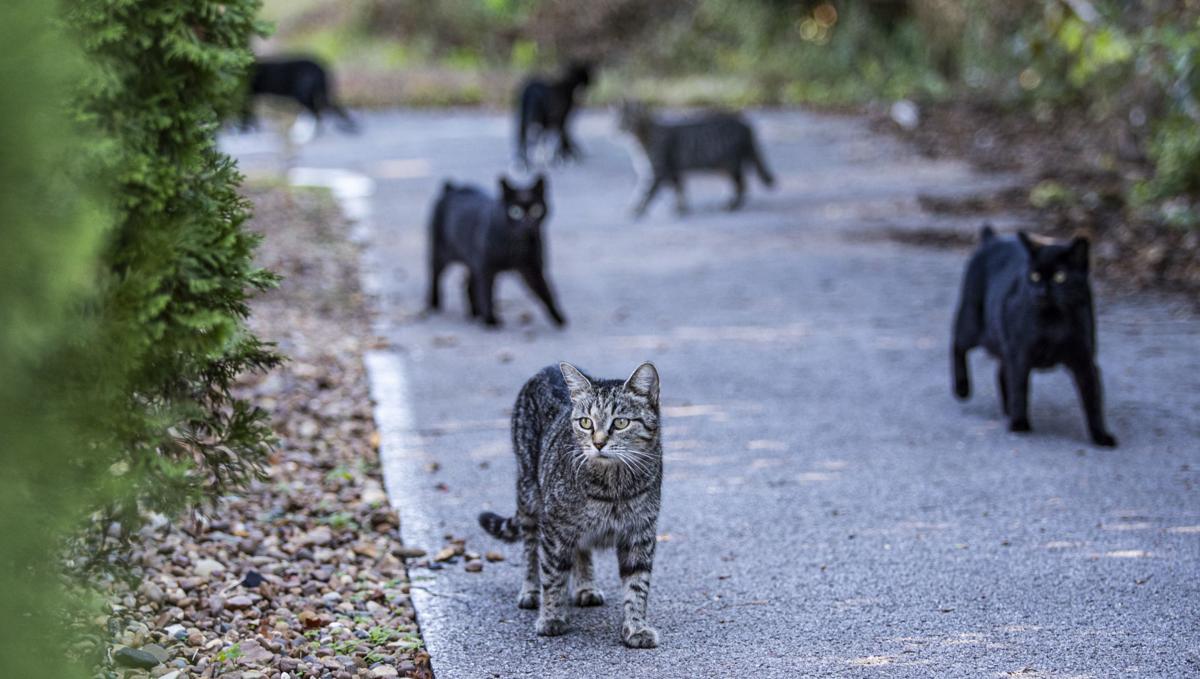 Feral cats are seen in October near Morgantown Road. 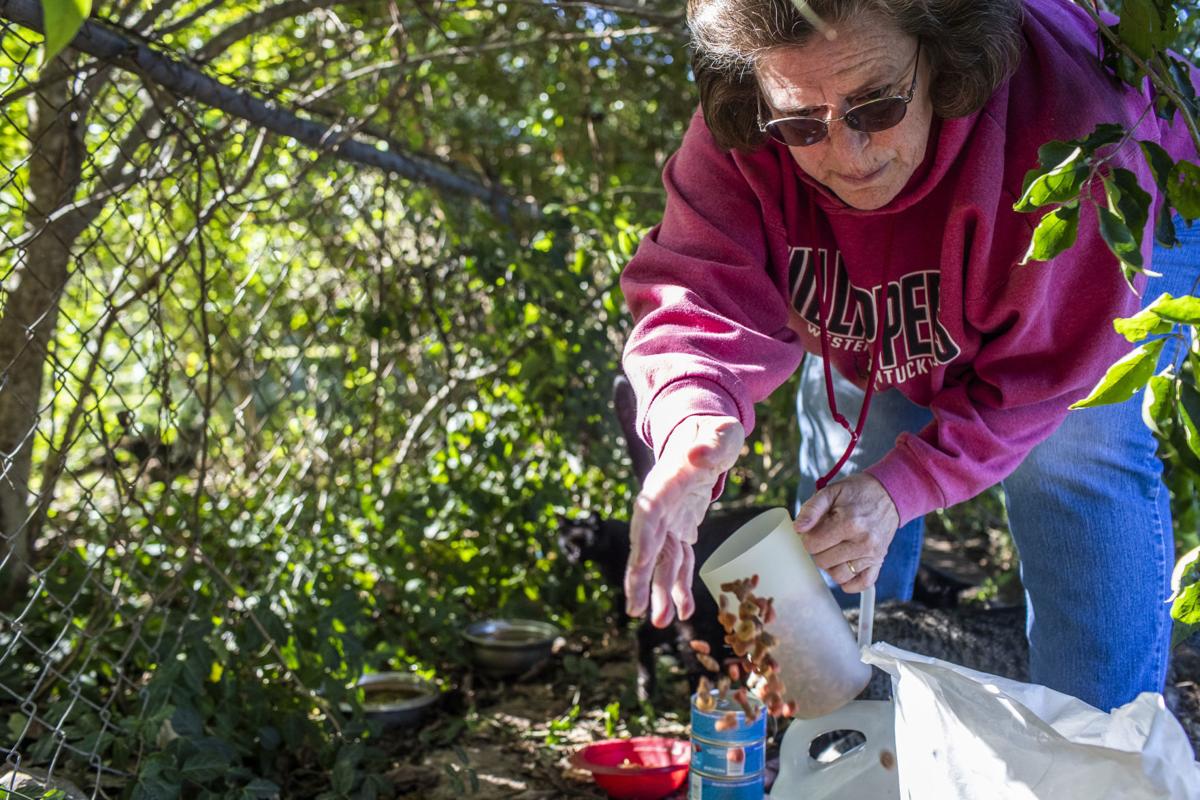 Paula Davids of Bowling Green leaves food for a colony of feral cats on Friday, Oct. 18, 2019, off of Morgantown Road. (Austin Anthony/photo@bgdailynews.com) 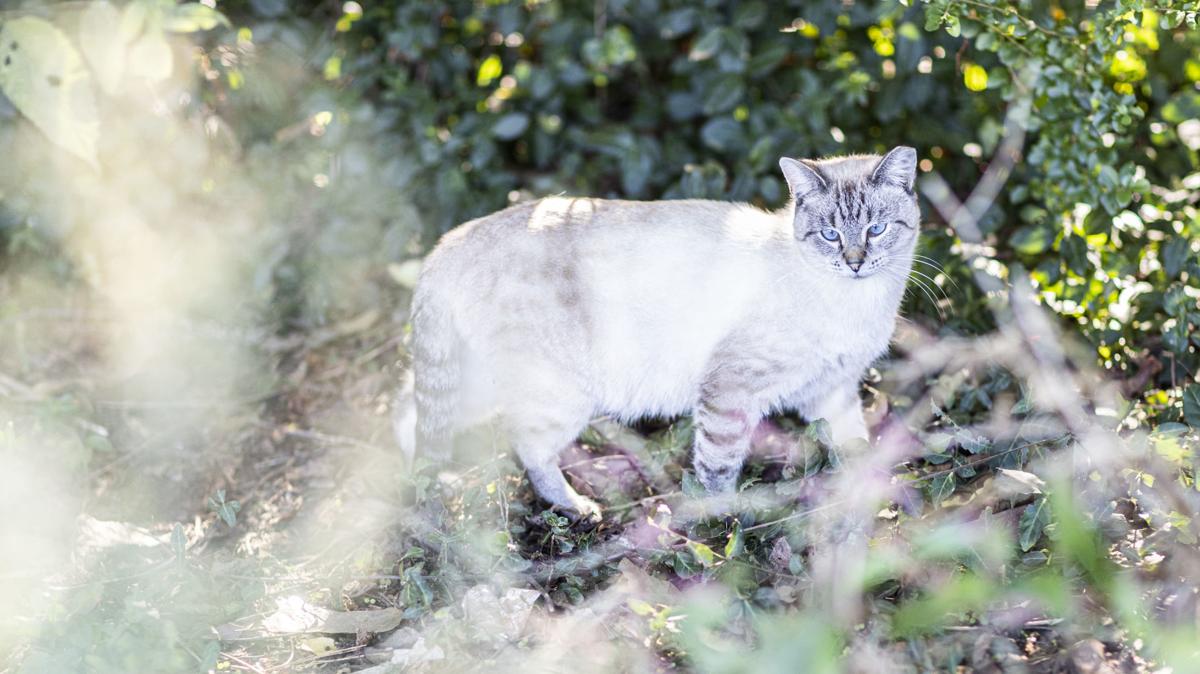 A feral cat with the tip missing from its left ear, indicating that it has been spayed or neutered on Friday, Oct. 18, 2019, off of Old Morgantown Road. (Austin Anthony/photo@bgdailynews.com) 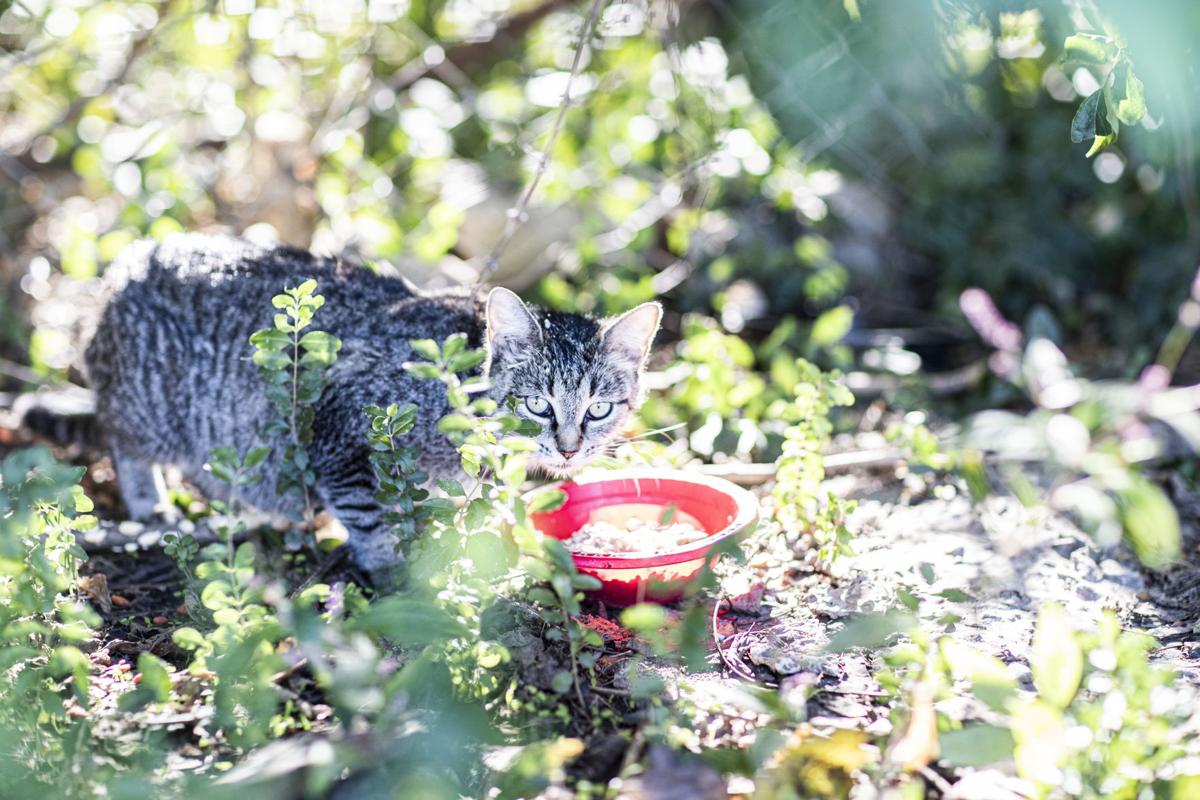 A feral cat eats from a bowl on Friday, Oct. 18, 2019, off of Morgantown Road. (Austin Anthony/photo@bgdailynews.com) 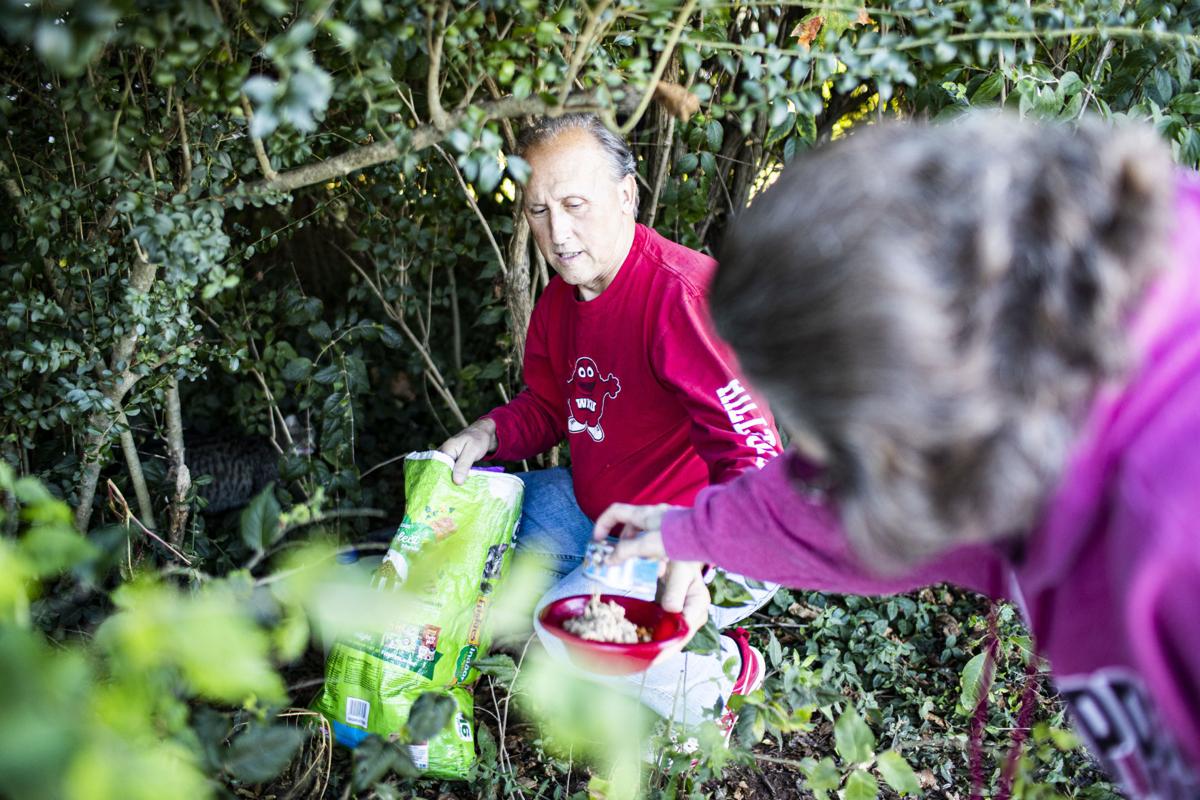 Paula Davids hands food to her husband Peter Davids to leave for a colony of feral cats on Friday, Oct. 18, 2019, off of Morgantown Road. (Austin Anthony/photo@bgdailynews.com) 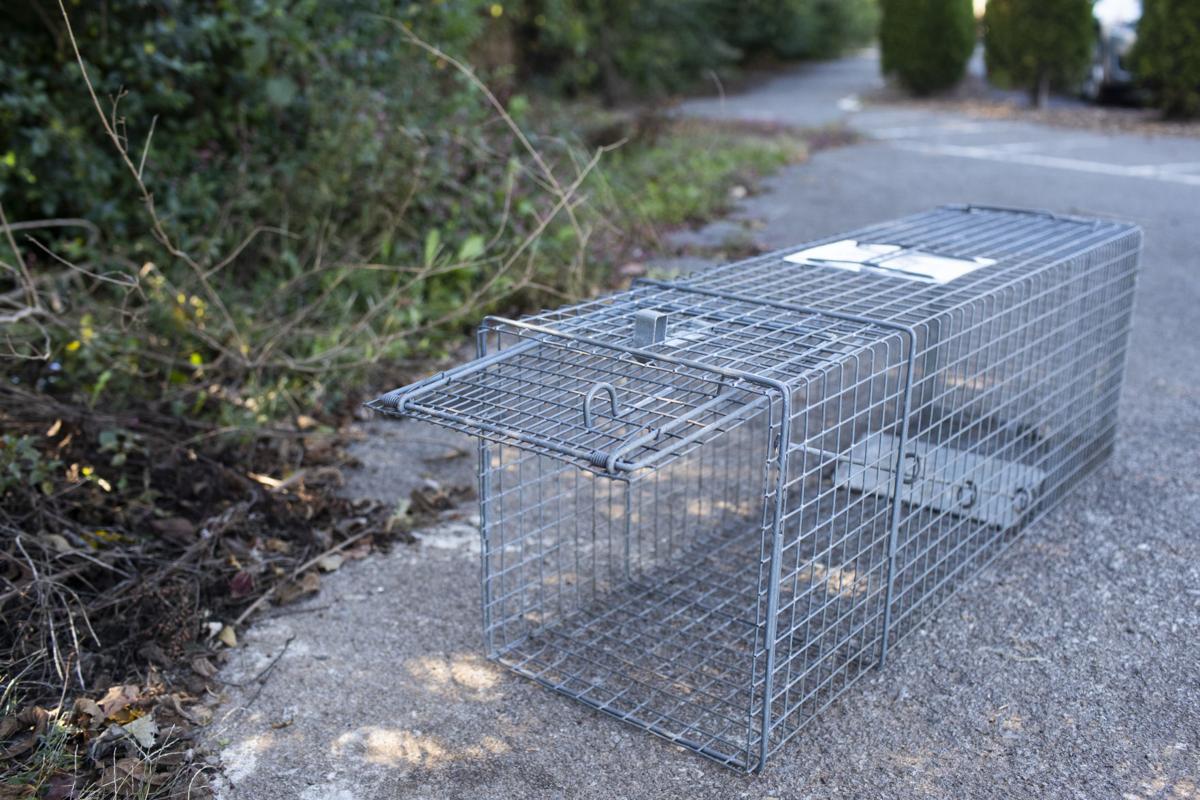 A trap used to collect feral cats to be spayed or neutered on Friday, Oct. 18, 2019, off of Old Morgantown Road. (Austin Anthony/photo@bgdailynews.com)

Feral cats are seen in October near Morgantown Road.

Paula Davids of Bowling Green leaves food for a colony of feral cats on Friday, Oct. 18, 2019, off of Morgantown Road. (Austin Anthony/photo@bgdailynews.com)

A feral cat with the tip missing from its left ear, indicating that it has been spayed or neutered on Friday, Oct. 18, 2019, off of Old Morgantown Road. (Austin Anthony/photo@bgdailynews.com)

A feral cat eats from a bowl on Friday, Oct. 18, 2019, off of Morgantown Road. (Austin Anthony/photo@bgdailynews.com)

Paula Davids hands food to her husband Peter Davids to leave for a colony of feral cats on Friday, Oct. 18, 2019, off of Morgantown Road. (Austin Anthony/photo@bgdailynews.com)

A trap used to collect feral cats to be spayed or neutered on Friday, Oct. 18, 2019, off of Old Morgantown Road. (Austin Anthony/photo@bgdailynews.com)

Near Warren Elementary School and Skyline Village mobile home park, several hundred cats can be spotted during the evening or early morning hours, sometimes sifting through the school’s outdoor dumpster.

Such a sight is not unusual in Warren County if you know where to look, but that could soon change.

The Humane Society received a $90,000 grant earlier this year from the animal rescue-supporting Petco Foundation to set up the “trap, neuter and return” program and end the practice of feral cat euthanization, which has not prevented the cats from repopulating.

“This is a program that’s going to work,” said Tracy Moser, an educator at the local Humane Society. “Even Disneyland uses this exact same program. The food they generate there attracts pests, and a stabilized cat colony controls the pests.”

Right now, the program is limited to the county. But the city of Bowling Green could pass a municipal order as early as the Bowling Green City Commission’s next meeting Nov. 5, according to Brent Childers, director of the city’s Neighborhood and Community Services department.

“We continue to trap cats on a regular basis, several hundred a year,” Childers said. “We share the same goal (as the Humane Society) to reduce the demand for cat-related calls.”

Cats can become pregnant by 4 months old, and they can carry litters averaging four kittens every four months. Within a year, a cat could have great-grandbabies and hundreds of family members.

“We can’t adopt our way out of this situation,” Moser said.

To trap, neuter and release, Humane Society-trained partners will go into cat colonies, set up a feeding schedule and monitor the animals to see which need vet care or need to be fixed.

To help keep tabs on this population, the Humane Society will “tip” the tops of the cats’ ears. Veterinarians will cut the ears while the cat is under anesthesia during the spay/neuter surgery. It’s safe, painless and heals quickly, according to the Best Friends Animal Society, a nonprofit that operates the nation’s largest homeless animal sanctuary.

With the tipped ears, people instantly know whether a cat has been spayed or neutered. The practice also reduces the time, energy and money spent on verification.

“It’s our intention to work this program in Bowling Green (and Warren County) to where we can start seeing more tipped ears to see less of a cat population,” Moser said.

The Humane Society will perform the spaying and neutering, but they won’t do the catching and releasing.

Instead, the Humane Society offers monthly training to become a colony cat caregiver every second Thursday at 6:15 p.m. in the Davis/Mosby Center at 1951 River St. in Bowling Green.

Experienced cat caregivers train people how to monitor cat populations in their neighborhoods and trap the animals. They lend themselves as text-friendly consults for those trying to tackle problem areas, and they hope to recruit more people to the cause.

“We’re not looking to do this for them. We’re looking to train them to be independent,” Moser said.

The Humane Society will still euthanize “untreatable animals” – such as cats that have been abused, shot with a BB gun or have liver failure – on a case-by-case basis. “It’s harder to treat feral cats,” Moser said, but they hope to limit euthanization to extreme situations.

“We only euthanize an animal that’s going to suffer,” Moser said.

Over time, the spaying or neutering will prevent cats from “spraying” mate-attracting odors and will eventually reduce the size of the cat colony.

But the cat colony won’t vanish. If there is food in an area, critters will come. And having a controlled cat population in a community is better than the alternative: If you remove cats, there will be a vacuum filled by rats, mice and snakes.

“Removing cats from an area doesn’t save the area,” Moser said.

Several months ago, the program officially began in Warren County at several mobile home parks. Cat colonies tend to pop up in lower-income communities where residents are less likely to afford spaying and neutering costs.

The Warren Elementary and Skyline Village mobile home park cat colony will be one of the first targets within the city limits.

Right now, the nonprofit relies on complaints to locate cat colonies. But there will eventually be a database to track cat counts and colony locations.

“It’s very new to us, we’re still working our bugs out,” Moser said, but it’s been successful thus far. “We’re getting a lot of cats fixed.”

City to try 'community cat' program to deal with strays

The Bowling Green City Commission is slated to vote Tuesday on a trial period for a program to help address the city’s feral cat population.