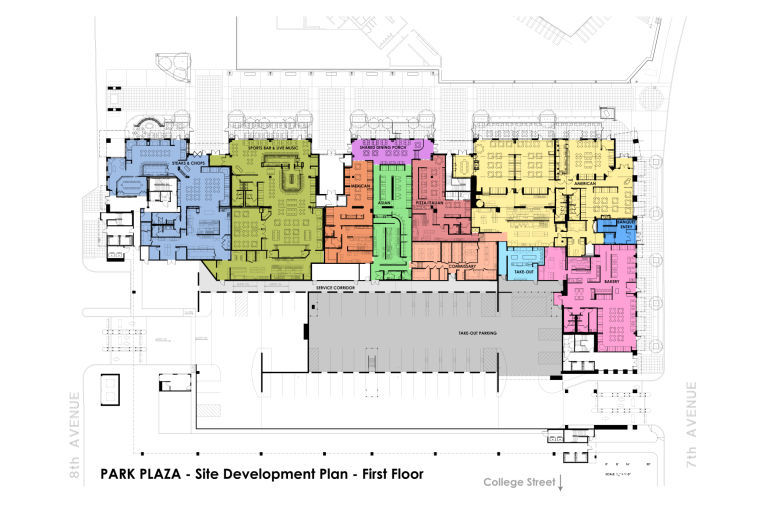 A blueprint for the restaurant space being developed by the Mills family that will wrap one side of the exterior of the parking garage. It will face the Bowling Green Ballpark. 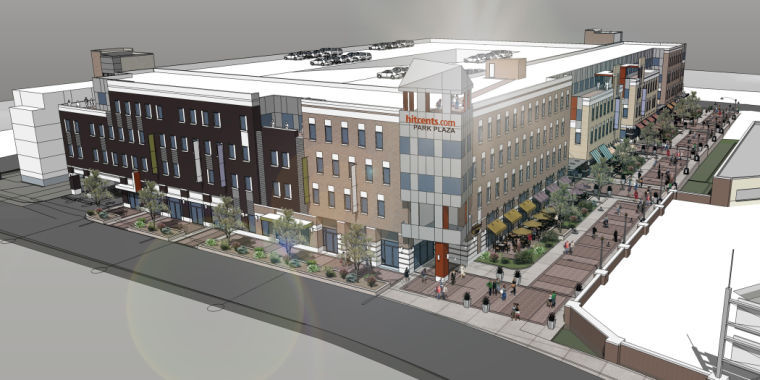 An exterior rendering shows  how the restaurants will spill onto a courtyard that will utilize a lot of potted plants and encourage outdoor dining.

An exterior rendering shows how the restaurants will spill onto a courtyard that will utilize a lot of potted plants and encourage outdoor dining.

A blueprint for the restaurant space being developed by the Mills family that will wrap one side of the exterior of the parking garage. It will face the Bowling Green Ballpark.

An exterior rendering shows  how the restaurants will spill onto a courtyard that will utilize a lot of potted plants and encourage outdoor dining.

By March, downtown Bowling Green should see the first four of seven new restaurant concepts that will open adjacent to Bowling Green Ballpark.

Hitcents founders Ed, Chris and Clinton Mills have formed MR Group Inc., which will own the restaurants.

“We realize that this is a big risk, but we feel like this is what Bowling Green needs ... to create a destination,” said Clinton Mills, CEO of Hitcents, a Web design, game and smartphone application development company. “So we felt like we wanted to take the jump and think that others will follow.”

The risk is somewhat minimized by being in the Tax Increment Financing district. The MR Group, which is developing three quarters of the retail wrap around the Eighth Avenue parking garage – including office space for Hitcents – will receive tenant improvement funds that would go to any occupant of space in the wrap. Those improvement funds will come from bonds being sold, which will be repaid with new tax money created in the TIF district. MR Group also will be able to realize a portion of the sales tax created by the restaurants.

“But we will have to make up the difference,” he said. “This is a big investment for us.”

Mills, who said the cost of the project is still in flux, said they tried to bring in individual name brands for the fast-food concepts, but in the end it was more feasible for one company – theirs – to own all the spaces.

“We will have economies of scale that way,” he said.

All the food will be prepped in a single commissary on the property, and there will be one central location for carryout orders.

The Millses have been working with Creative Hospitality Associates of Chicago to develop the concepts, interiors and the menus for each of the spaces.

The first phase will include three fast-casual restaurants. Customers would place their orders at the counter, and meals would be brought out to them. There will be a common seating area, both indoors and outside, for the restaurants that will include Mexican street taqueria style fare, Asian with such things as lettuce wraps and Italian with pizza and other items. Those three are essentially in the middle of the ground floor of the wrap.

Adjacent to those spaces, on the Eighth Avenue side, a sports bar will be constructed at the same time.

“We are going to have a stage ... for things like music, and we hope to have coach’s shows,” he said.

The space will have two bars, depending on your mood.

Later spaces to be developed, once the first phase opens, are a fine-dining steakhouse that would just be open for dinners, an American fare restaurant and a bakery. While all the spaces have been designed, Mills said they want to be flexible enough to change the future venues if it is dictated by the first phase.

The outdoors will have stamped concrete and lots of potted greenery and outdoor dining.

“In the walkway, we want something to be going on all the time,” he said.

The events could include concerts, festivals or farmers markets, Mills gave as suggestions.

“We are trying to create a destination,” Mills said, noting that the restaurants will be open seven days a week.

“In our young lives we have traveled a lot and eaten at a lot of good restaurants, so we will be all about service, food quality and atmosphere,” he said.

While the MR Group will own the restaurants, Mills said they will be searching for an executive chief to oversee operations and managers for each space.

“We are going to focus on what we do best, which is the creativity and technology side of things,” he said. “So we are going to try to so some cutting-edge stuff ... that we hope to gain us national press.”

Mills wouldn’t detail what the “stuff” may be.

A banquet room that could seat up to 300 people or divided for smaller groups will be above the restaurants. That space should also be complete by March.

Ultimately, the restaurants will need about 500 full- and part-time employees. In addition to being a destination spot, Mills said the restaurants will serve the growing number of people working downtown, including Hitcents employees, and those who will potentially live here. TIF overseers are still working to bring in a developer to construct apartments on the College Street side of the wrap.

So what will this do to existing restaurants?

“Look at Scottsville Road ... as more restaurants opened up there, you see the number of people going out there growing,” he said. “So we want to make this a destination and feel like people will come here as well. We feel like it will help everybody. Once people see this become successful, we think other people will pop up around here.”

The names of the restaurant are still being worked out, but the plaza area is dubbed Hitcents Park Plaza.

—To see designs of the space, visit bgdailynews.com.

— Robyn L. Minor covers business, environment, transportation and other issues for the Daily News. Follow her on Twitter at twitter.com/bowserminor or visit bgdailynews.com.

Growing up in Bowling Green in a house where Houchens-Smith Stadium now stands, Neal McKinney is a lifelong fan of Western Kentucky sports.