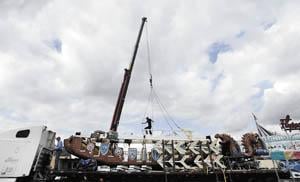 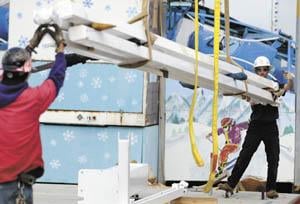 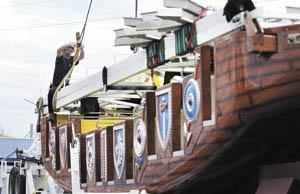 Hunter Wilson/Daily NewsBob Laird, Director of Maintenance at Beech Bend Amusement Park, wraps a strap around pieces of a new ride that the park received on Thursday.

Hunter Wilson/Daily NewsBob Laird, Director of Maintenance at Beech Bend Amusement Park, wraps a strap around pieces of a new ride that the park received on Thursday.

After the pop music icon suffered a series of financial problems, many of the rides and other items from his outlandish Neverland were sold in a foreclosure auction last year. Beech Bend owner Dallas Jones put in bids for three or four of the rides and was the top bidder for the Sea Dragon.

But before the ride was transported on a large semi to Bowling Green, Jones had the Sea Dragon cleaned and painted by a California company.

“The sun had faded it. We had it sanded and painted and it’ll be just like a new ride,” he said.

Jones was attracted to the Sea Dragon for several reasons.

“It’s a Kansas-made ride, so we can get parts for it. Rides that are made in Italy or Russia, sometimes it’s hard to get parts for them,” he said. “It’s also something different than what we have.”

The other attraction was the tie-in to Jackson, which Jones said he hopes will bring in the crowds.

Jones said he’ll put a plaque next to the Sea Dragon, letting people know about the ride’s unique history. Park workers have spent the last two weeks building a concrete platform for the ride alongside Beech Bend’s lagoon.

Jackson reportedly bought the ride new in 1992 from manufacturer Chance Rides Manufacturing of Wichita, Kan. Still being made by Chance for other amusement parks, the ride would now cost about $800,000, Jones said,

Jones declined to say what his winning bid was, but said between it and a new carousel installed at Beech Bend last year, he has spent more than $1 million.

After the ride is cleaned of road grime and re-assembled in the coming weeks, state inspectors will examine the Sea Dragon and see if it’s safe for riders before the park’s May 1 summer season opening.

“I’m glad we got it,” Jones said. “We had heard that it was (Jackson’s) favorite ride.”