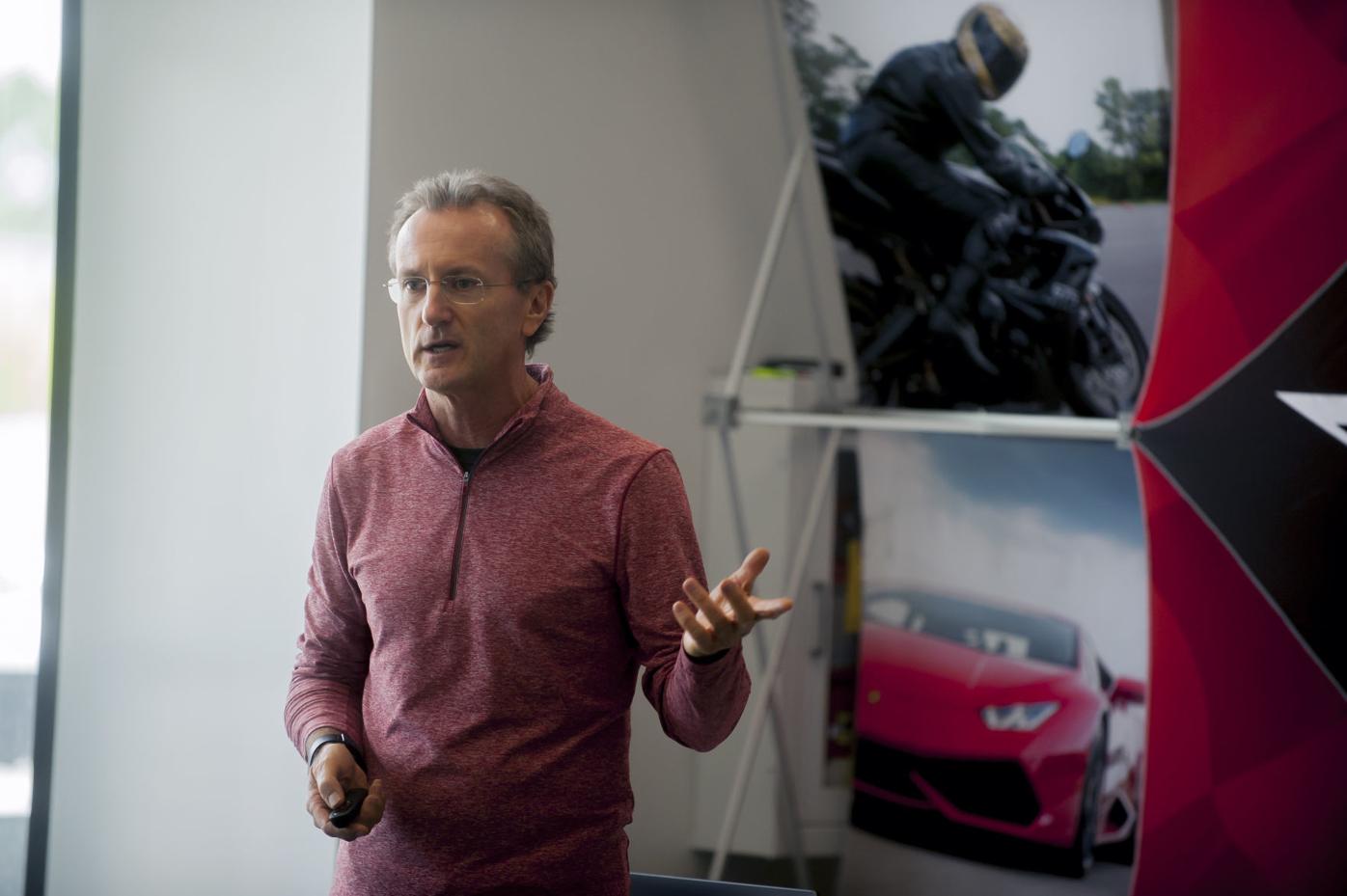 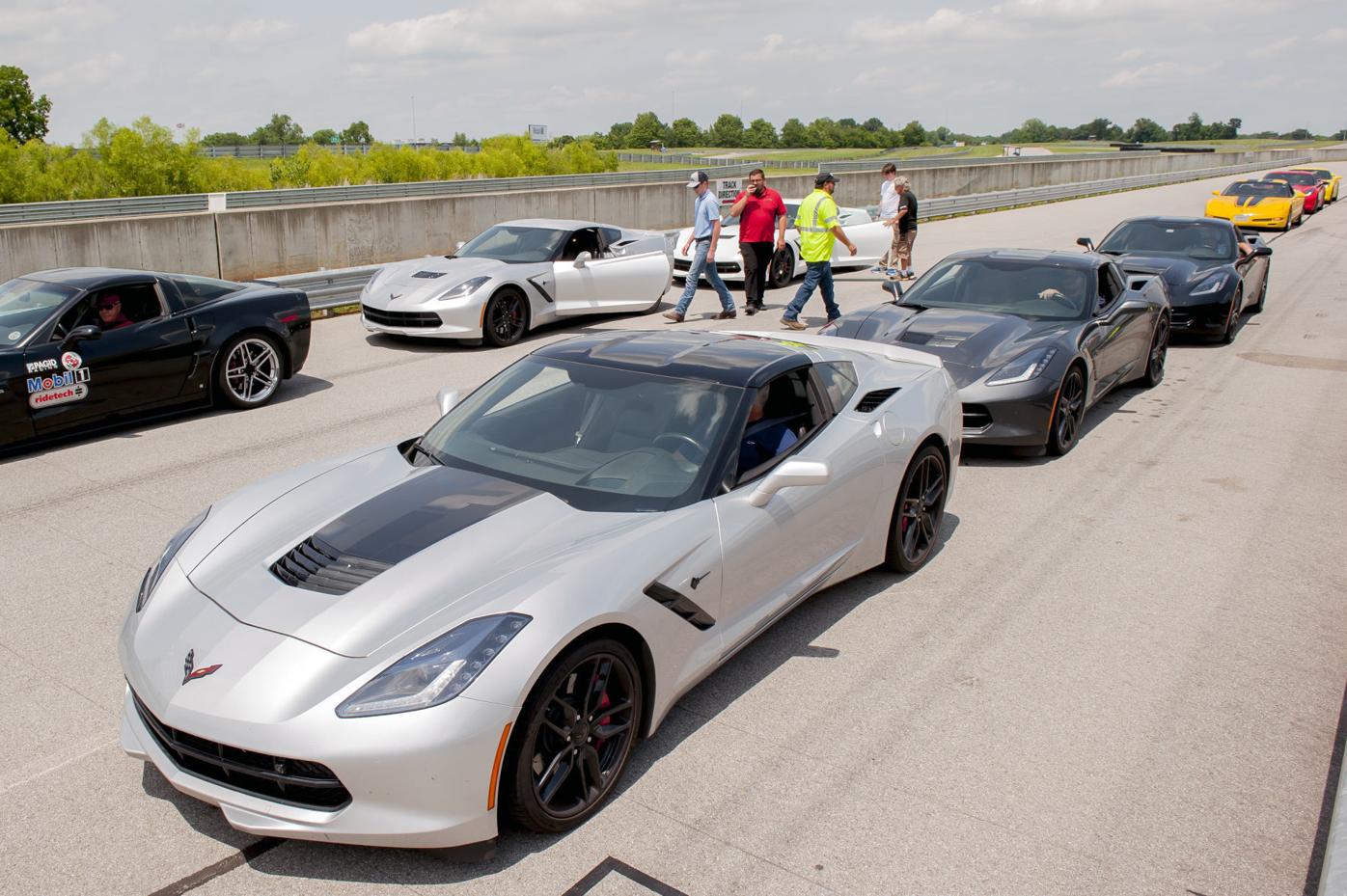 Andy Pilgrim has been a professional race car driver for over 30 years, but a passion for finding a “simple solution” to the “complex problem” that is traffic safety and distracted driving prompted him to start the Traffic Safety Education Foundation in 1994 as a “give-back project.”

Pilgrim – a native of Nottingham, England, who became a U.S. citizen in 1998 – said he speaks to new drivers, parents, teachers and school-aged students about traffic safety. Recently, he’s focused his work on distracted driving since the U.S. has reached “full saturation with smartphones.”

“Distracted driving is the biggest problem we have,” Pilgrim said. “People need to understand it’s not normal right now. The United States has the fastest increase in traffic fatalities and injuries in the world over the last four years. We are No. 1, and that’s a No. 1 we don’t want.”

Pilgrim said employees got to “have fun” after listening to his presentation – workers raced go-karts, drove a Camaro on the autocross course and drove Corvettes at the Motorsports Park’s on-site facilities for the rest of the day.

Wes Watt, public information officer for the KYTC District 3 office, said linking up with Scotty’s was “a natural partnership” since both entities have crews working “relatively unprotected” in construction zones. Workers depend on drivers for their safety, which is why distracted driving is a “major issue.”

“Distracted driving can result in injury and even death and we have seen that happen in our area in the last few years,” Watt said. “We did have an employee killed in a work zone, so we want to raise awareness to not only our folks, but to everybody else as well. One stat that would be surprising to a lot of motorists is that the majority of the time, it’s the people in the vehicles who get hurt more often than the workers in the construction zone. So, the motorists have something to gain by driving safely as well.”

Pilgrim’s message emphasized his “Inside/Out Philosophy,” which deals with traffic safety both at work and at home. Since the KYTC and Scotty’s both have employees working near busy roadways, “any education” they can get to ensure workers are kept safe is a good thing in Pilgrim’s view.

“Also, when they’re driving (company) trucks, they need the information that they can’t be distracted because liability problems with companies now due to distracted driving are putting companies out of business,” Pilgrim said. “The lawsuits are massive – we’re talking $20, $30 million lawsuits for distracted driving cases that didn’t even result in fatalities, so there’s a component there of inside work. They need to make sure that they’re safe and aware.”

Pilgrim went on to speak about how distracted driving affects families. He said children start learning “driving habits and behaviors from the moment the child safety seat is turned around to face front.” Due to that fact, parents and grandparents have to be aware their kids will drive “exactly like” them.

Watt said the widespread rise of technology makes it “hard to pinpoint” just one main cause of distracted driving, which is why Pilgrim’s presentation helped people understand it’s not as simple as just putting their phone away.

Pilgrim is still getting paid to drive race cars, which he said is “kinda ridiculous” for someone his age, but he is also working as a “traffic safety expert” to bring “a safety component” to the many corporate events conducted by the Motorsports Park and the National Corvette Museum.

To Pilgrim, his speech showed everyone “from management to the road crews to the office people” that driving distracted was an issue that could be rectified by taking more initiative to “improve (their) driving skills.” Whether they learn at home or at facilities like the Motorsports Park, people need to be “better.”