Home
News
Obituaries
Sports
Opinion
Classifieds
Jobs
e-Edition
Share This
Following President Donald Trump’s declaration of a national emergency amid the ongoing coronavirus outbreak, and in light of the numerous ways the pandemic is affecting day-to-day life in southcentral Kentucky, the Daily News has removed paywall restrictions from bgdailynews.com in order to provide area residents access to important information and reporting. Visit our coronavirus section.
1 of 3 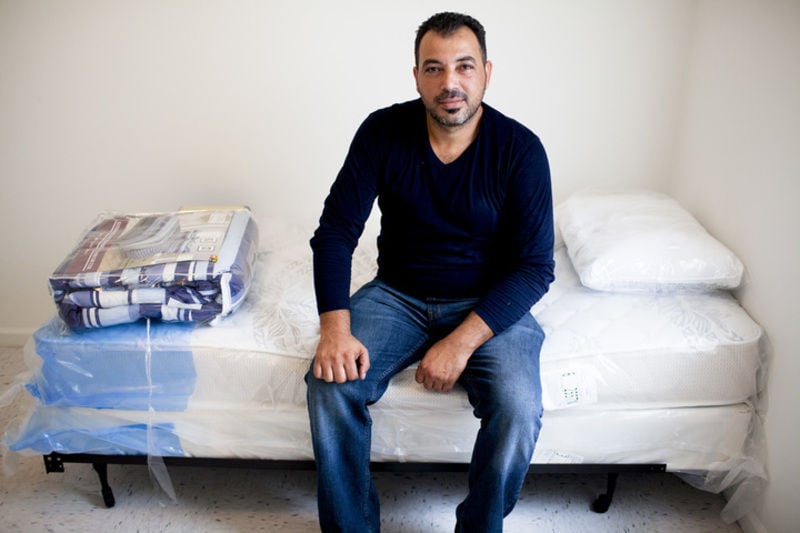 Muhannad Salih, originally from Iraq, poses for a photo in an apartment building he recently furnished with the International Center for two refugees who have not moved in yet on Thursday, Sept. 11, 2014. (Austin Anthony/Daily News) 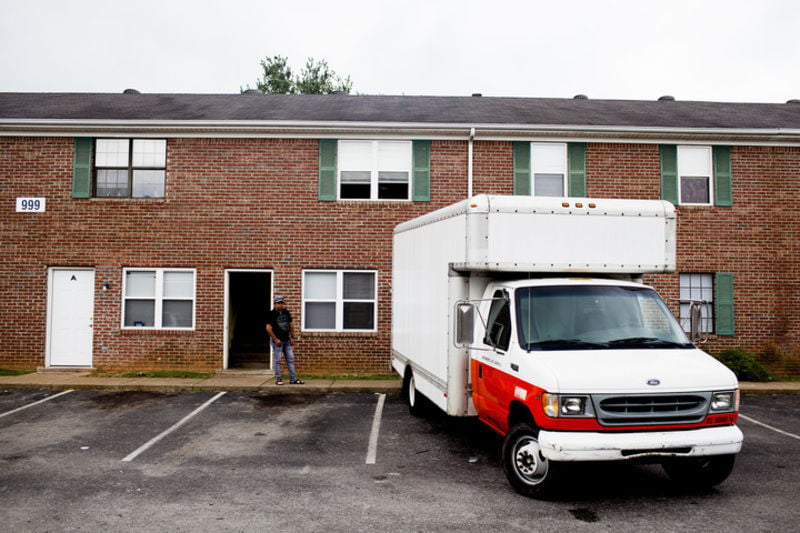 Julio Corujo Guach, originally from Cuba, volunteers to help furnish an apartment with the International Center for two refugees who have not moved in yet on Thursday, Sept. 11, 2014 in Bowling Green. (Austin Anthony/Daily News) 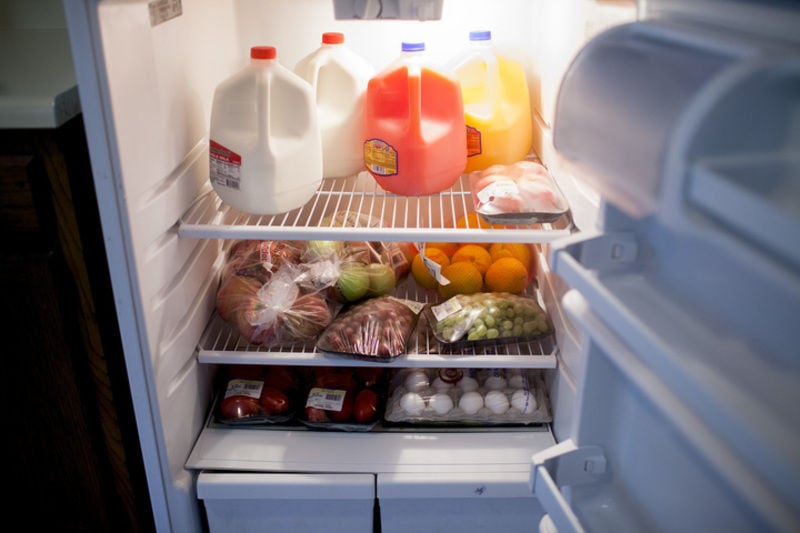 The International Center stocks the refrigerator for two refugees who have not moved in yet on Thursday, Sept. 11, 2014 in their apartment in Bowling Green. (Austin Anthony/Daily News)

Muhannad Salih, originally from Iraq, poses for a photo in an apartment building he recently furnished with the International Center for two refugees who have not moved in yet on Thursday, Sept. 11, 2014. (Austin Anthony/Daily News)

Julio Corujo Guach, originally from Cuba, volunteers to help furnish an apartment with the International Center for two refugees who have not moved in yet on Thursday, Sept. 11, 2014 in Bowling Green. (Austin Anthony/Daily News)

The International Center stocks the refrigerator for two refugees who have not moved in yet on Thursday, Sept. 11, 2014 in their apartment in Bowling Green. (Austin Anthony/Daily News)

Inside, the apartment smelled of paint to match its fresh white walls.

Outside, a white moving truck held two twin beds, a love seat and a kitchen table and chairs.

Ahead of two incoming refugees, Mohannad Salih, the logistics assistant for the International Center, filled a three-bedroom apartment with pieces that would make it feel like a home.

The pantry and fridge were already stocked with food and utensils the two men would need when they arrived from the airport later that day.

The mattresses were new, still wrapped in plastic. The couch was purchased from a consignment store. The new residents can add furniture later from the International Center, Salih said – clothes, desks, a coffee table or a TV.

“Everything is very good. It helped make it feel more comfortable,” Salih said.

Salih and his family, who are refugees from Iraq, moved into a similar apartment when they arrived in Bowling Green in 2009. Now, he furnishes homes for others.

“I like my job because I help people. He comes to the U.S. for the first time, he can’t afford this,” Salih said, gesturing to the sofa in the living room. “I help him with everything.”

Hundreds of refugees resettle in Bowling Green each year through the International Center. The growing number of foreign-born residents makes up 10.6 percent of the city’s population, according to U.S. Census Bureau data from 2012.

Step one in each case is a place to live. Shelter is a basic, universal need, and studies show it has a far-reaching impact on a person’s life. Ample rental housing in Bowling Green makes it easy to find an apartment for most refugees, said Albert Mbanfu, executive director of the International Center.

The center depends on reliable housing to not only accommodate refugees, but to support them as they face challenges while making their way in a new country.

When he took the helm of the International Center a couple of years ago, Mbanfu started spreading out housing placement of refugees because they had become concentrated in one area.

“One school was being hammered with refugee kids because they all lived on Lovers Lane,” he said.

Those living in apartments on Lovers Lane attended Briarwood Elementary School. An influx of refugees bumped the number of English language learners from a little more than a handful at that school to 70 students, peaking around 2009 at 140 students, said Skip Cleavinger, director of English Learner Programs at Warren County Public Schools.

The International Center in Bowling Green will have resettled 299 individuals in fiscal year 2014 once it ends Tuesday. For 2015, the center awaits authorization to resettle 350 refugees. Since it started in 1979 in response to an influx of immigrants, the center has resettled more than 10,000 refugees and immigrants from more than 30 countries.

Home is where refugees’ new lives start. From there, culture and language classes, work and school each play a role in community integration, which is the objective of resettlement, according to Mercy Housing, a national organization that concentrates on housing and has a refugee program.

The International Center has forged relationships with landlords throughout the city, sticking with those who work well with the population, are accessible to the center and provide a safe environment.

When people complained that the Lovers Lane housing didn’t meet standards, monitors checked the apartments and weren’t happy with what they saw.

“When I took over, I said we could not continue down that path. I put the halt on that, pending adjustment by the landlord,” Mbanfu said. “We don’t just throw them anywhere because we find an apartment.”

Refugees arrive in Bowling Green without jobs, money or credit history. The International Center pays rent for the first three months. Depending on the program, Mbanfu said, they could receive assistance for six months. Landlords willingly rent to refugees because the International Center guarantees rent for up to half a year – and they step in when problems arise.

“That ... puts the refugee in a comfortable position to focus more on doing their job than dealing with a hostile landlord.”

For furniture, Salih goes to Consignment World. He looks around for a couch or a dining table and talks to the store’s co-owner, Roy Phillips, about what he needs.

“He tends to stay away from sleeper sofas because they’re heavy and he has to take them up stairs,” Phillips said.

Salih knows when the incoming family is larger and needs a table with six chairs instead of four. He sometimes visits Consignment World once or twice a week, Phillips said.

“If I don’t have it, I’ll try to find it,” Phillips said. “I’ll check my schedule to see what I’m picking up. ... Sometimes I’ll drive around and try to find it.”

While Phillips likes that he has found a faithful furniture buyer, he said he goes out of his way to help because he enjoys working with the city’s growing international community.

The resettlement of people from Myanmar, Bhutan, Iraq, Somalia, the Congo, Zimbabwe and Cuba over the years has added diversity to Bowling Green’s predominantly white population.

Cultural differences like those on display Saturday at the International Festival exemplify the beauty of such diversity. People describe refugees as hard-working, patient, eager and grateful.

But there are bits of Bowling Green that don’t fit the cultures resettling here. Wrapped in the concept of the American dream is an underlying sense of individualism that’s rarely shared by immigrants who seek refuge in the U.S.

Leyda Becker, international communities liaison for the city of Bowling Green, said this difference shows itself in housing.

Many refugees come to Bowling Green with extended family or older children. Iraqi couple Faaez Mustafa and Sanaa Dawood arrived in April with their son and Dawood’s sister and mother.

This year, Mbanfu said, the city received many refugees who came to Bowling Green to join family.

Some refugees have more children than a typical American family. It’s rare, Mbanfu said, but it happens. Some Somali or Congelese households have seven or 10 children, Becker said.

“They consider that to be a great blessing to their family,” she said. “And that’s not really what we think of in America (where) the average home is a three-bedroom, two-bath home.”

Salih and his family left Baghdad for Syria before coming to the U.S. in 2009.

“There is so much trouble there,” he said.

He likes Bowling Green because it is a good place for family. His son is in seventh grade in Warren County.

“He never went to school” in Iraq, Salih said. “We were scared to send him.”

He works four days a week filling apartments for incoming refugees. Before he was hired at the International Center two years ago, Salih said he worked the night shift at Perdue Farms. “This is better,” he said. “Sometimes I (didn’t) see my kids.”

Community Action of Southern Kentucky has a hand in placing refugees in jobs. Heath Ray, lead refugee job development specialist, said before the organization will connect refugees with employers, everything else should be stable, including housing. People are placed in jobs based on their ability to get to them, which often requires carpooling with a neighbor.

Refugees with limited language skills often start in entry-level positions in warehouses, manufacturing or meat processing. They make about $9.50 or $10.50 an hour but soon see performance-driven pay bumps, he said. He recalled a man who made $15 an hour after only a year.

“The opportunity is there to make money to support their family,” Ray said. “They’re just so dedicated and hard-working.”

Many refugee families stay in the same apartment for years, Mbanfu said. But they aren’t required to. Many get on the waiting list for the Housing Authority’s low-income housing. Others look to buy homes.

“You’ll be surprised at how much they will save in a year or two,” Mbanfu said.

When Me Meh and her family escaped Burma for a refugee camp in Thailand, they lived in a bamboo house without electricity or other amenities.

The family of 10 resettled in Bowling Green in 2009, bringing with them only some clothes and important papers, Meh said. She was 17. Meh’s two older brothers and her father started work while she went to school and her mother took care of their home.

After a couple of years, the three had saved $4,000. She said the International Center gave them a grant that matched their savings, and they were able to put a downpayment on a house.

Though she had a difficult time adjusting to the language and the culture, she graduated from high school in 2013 and is in her second year at Southcentral Kentucky Community and Technical College.

Meh said her family is happy to own their house. She feels safer. It deepened her family’s roots in the community. Meh works with Warren County schools to translate for other refugee families, and she’s pursuing citizenship.

Now that the family has a mortgage, she said, they’ll stay in Bowling Green for a long time.

Sisters JoAnn and Carly Smith agree their shared bedroom in their next house will be blue.