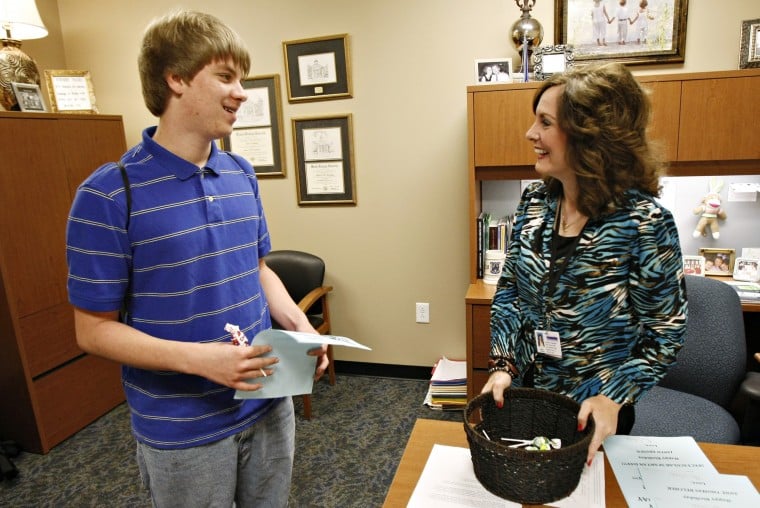 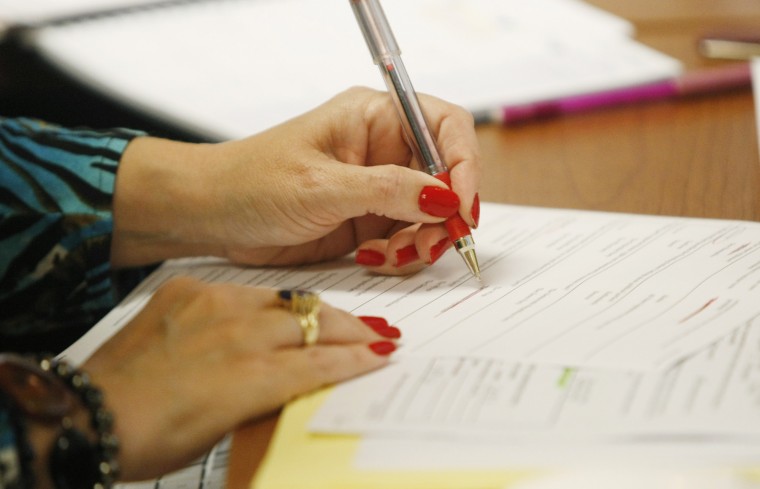 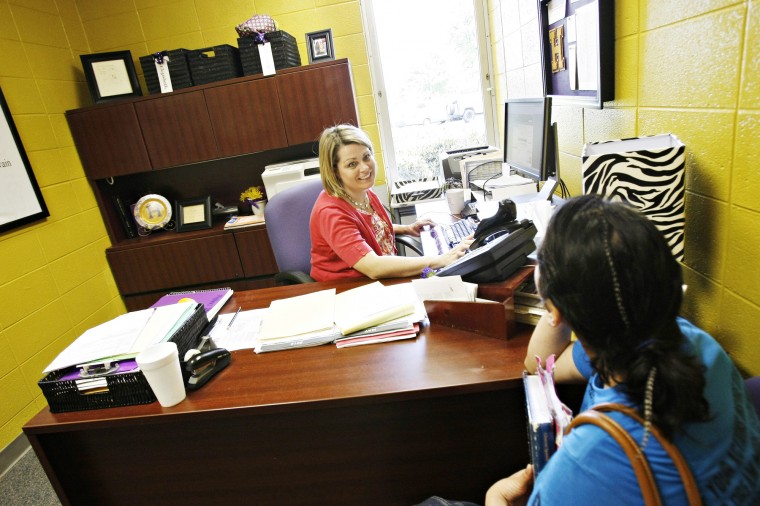 Karen Swiney, of Bowling Green, a guidance councilor at Bowling Green High School, speaks with a student in her office, on Wednesday, April 25, 2012, in Bowling Green, Ky. Swiney oversees half of the freshman and of the junior class at the school. (Photo by Alex Slitz/Daily News) 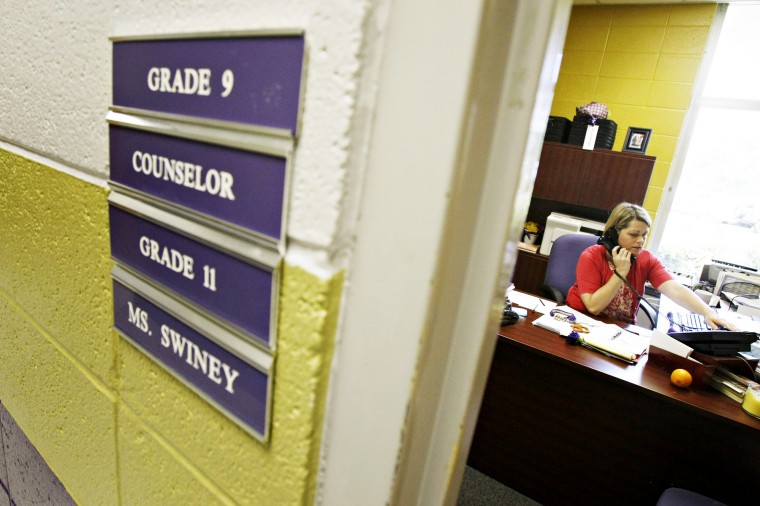 Karen Swiney, of Bowling Green, a guidance councilor at Bowling Green High School, speaks with a student in her office, on Wednesday, April 25, 2012, in Bowling Green, Ky. Swiney oversees half of the freshman and of the junior class at the school. (Photo by Alex Slitz/Daily News)

School guidance counselors wear many hats, from helping students with personal issues to scheduling their classes.

One of their roles has become more important than ever: preparing students to be ready for life after high school, which increasingly means college.

More Kentucky students than ever are getting some form of higher education. More than 63 percent of the state’s public high school class of 2010 enrolled in college of some kind, which is the highest percentage on record, according to data released by the Kentucky P-20 Data Collaborative.

Though many factors have contributed to the rise in college attendance, in schools, it’s often counselors who are educating students about college options and helping them plan for their future.

The many roles of counselors

Counselors do everything from helping students with their mental or physical health needs to making sure they select the right classes and mediating concerns between parents, teachers and students, said Marti Guelde, a guidance counselor at South Warren High School.

“Our role is different to every student that needs us, and you have to change gears pretty quickly,” she said.

One important role that counselors have is educating students about college options and helping them achieve their higher education goals, said Karen Swiney, a guidance counselor at Bowling Green High School.

Getting some form of higher education puts students in a position to better market and support themselves, because they’re able to get higher-paying jobs, she said.

Guelde said she talks to students about college and careers before they even start high school. She visits them as eighth-graders and explains how to begin setting up their options.

It’s important to repeatedly tell students about the importance of preparing for college or a career, she said.

“Teenagers think in the here and now,” Guelde said. “They’ve got some of the biggest life decisions to make at a time in their life when they are not equipped to make it. That’s why we just drill it in constantly.”

“At the end of high school, they have in one spot all the things that they need for scholarship applications,” Swiney said.

As students get closer to high school graduation, counselors also perform other college-related tasks, such as helping students apply to colleges, sending transcripts to colleges, helping students find scholarships and handling the preparation and administration of Advanced Placement tests as well as the SAT and ACT, Swiney said.

Beginning with the end in mind

A lot of times, people think of counselors at the high school level helping students transition into college or a career, but the seeds are planted much earlier.

High school used to be the start of college and career readiness initiatives, but over time, it has trickled down into the elementary schools, where children are taught to be lifelong learners, Bertuleit said.

“It gives purpose to what they’re doing every day,” she said.

It takes a lot of preparation for students to get to the point where they can develop an Individual Learning Plan, and the process begins in elementary school, said Margie Dotson, a guidance counselor at T.C. Cherry Elementary School.

It’s important to show children the importance of education at an early age so they begin with the end in mind, she said.

Dotson talks with students about attributes related to career readiness, such as responsibility and relationship building. She tells them how they can be proactive in planning their education based on what kind of career they’re interested in.

“I promote education as a way to get what they want,” Dotson said. “If you don’t have that component, all the direction and academics won’t help. They have to see the relevance of school. ”

She sees her role as a counselor being instrumental in building those foundations and helping children develop as people.

“I think we get them at the best time – while they’re developing their skills and relationships,” Dotson said. “Relationship skills are necessary for all life beyond high school.”

Many local elementary schools have adopted the Leader In Me program, which is one way students are learning to set goals and be responsible. The program is based on “The 7 Habits of Highly Effective People” and teaches children to be proactive, plan ahead, listen before speaking and other responsible practices.

“What has been really neat is to see how the kids have embraced it,” Bertuleit said. “They talk about the careers or schools they want to pursue.”

Higher education on the rise

Swiney believes one reason more students are enrolling in college is that they’re beginning to see all the options available to them. Counselors are helping students realize that four-year institutions aren’t the only way to continue their education. There are also community and technical colleges and specialized trade schools, which are all viable choices.

“What I see is students that didn’t think that college might be a possibility for them are starting to see those doors open up,” Swiney said.

Guelde also thinks it’s important to avoid presenting college as the only option for students after high school.

“Not everybody’s route is college ... but everybody has the potential to be a contributing member of society, so you have to find that niche,” Guelde said.

Every student has different needs, and one of her jobs as a counselor is to find out what each student’s need is and guide the student in the right direction, she said. Her goal is to produce high school graduates who will be successful when they leave and choose their major or career wisely.

“They need some form of formal education, and I think society does realize that,” Guelde said.

“I think also it’s just that because of the world we live in now, (higher education is) something they have to have,” she said. “Where a high school diploma used to be all that was needed, now I think students see the need for more training.”

“I think we’re at a better advantage to get information out to kids about scholarships and things just because of the technology that we have now,” Swiney said.

A lot of students initially think they can’t afford college, but counselors introduce them to different scholarship avenues to show them that they can, she said.

“Even if they didn’t think they had the money, there are monies available that can help them go to school,” Swiney said. “That’s exciting when they realize that doors that they thought were closed could be open for them.”

Curriculum and the future

Cindy Beals, district assessment coordinator for Warren County Public Schools, thinks the dialogue about life after high school has changed. Rather than asking students whether they’re going to college, counselors have started asking students what they want to be and what they plan to do to get them there, Beals said.

More and more, there is a focus on implementing curriculum that will make students more prepared for life after high school, she said. Curriculum plays a big role in getting students ready for college or a career, and schools offer an increasing number of options that help students reach their college goals, such as Advanced Placement courses and dual credit classes, she said.

“High schools are doing much better at thinking outside the box,” Beals said.

Beals thinks students will continue to be more prepared for college with Kentucky’s adoption of new common core standards.

“The new standards are so aligned to college and career readiness standards,” she said. “We no longer have to pick one or the other.”