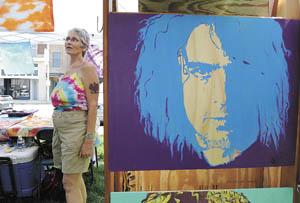 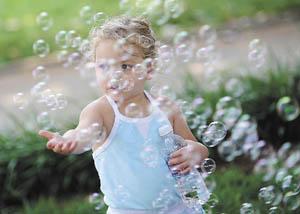 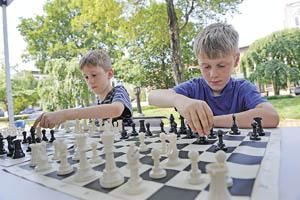 Robert Purcell (left), 10, and his brother, Ethan, 8, both of Alvaton, play chess against Samuel Hunt of the Western Kentucky University chess club, during the monthly downtown event.

Robert Purcell (left), 10, and his brother, Ethan, 8, both of Alvaton, play chess against Samuel Hunt of the Western Kentucky University chess club, during the monthly downtown event.

Robert Purcell enjoys playing chess because he likes the strategizing.

That’s why the 10-year-old Alvaton resident came out to Second Saturdays at Fountain Square Park, so he could play with Western Kentucky University chess club organizer Samuel Hunt.

“I wouldn’t call myself really good but I have had some practice,” Robert said.

He and his mom, Tonja Wilt, had just finished playing at home before they came out Saturday morning.

“I could use a few pointers,” he said.

Hunt gently offered Robert some help, telling him why such a move was good, but Wilt said, “We just like to play because it’s fun.”

But chess also teaches players that there are consequences to moves and forces them to think, she said.

Robert’s younger brother, Ethan, 8, was set up at an adjacent board.

The chess station was just one of more than a dozen vendors that took part in the Second Saturday event; others included children’s games, jewelry vendors, food vendors and artists. The Barren River Trio provided music.

Barron said that’s a question he can’t answer with a lot of certainty from month to month because the event is growing incrementally.

Barron said the curves around the square and Park Row would provide a perfect space for them to set up.

“So hopefully someone will take that on,” he said.

As for some of the artisans at the event, K.O. and Oz Blankenship said it was slow going, but the two were hopeful that traffic would pick up.

Both are tie-dye instructors and K.O. recently become a certified sewing instructor and hopes to have classes soon.

The two also said the event has generated some interest in a tie-dye class. They call the business Art-N-Fart.

K.O. said some people think the name is derogatory.

Of the classes, she said: “We do it like a party because it takes two days. And we have a cookout when we do it.”

The couple moved from the Florida Keys to Smiths Grove in January in search of a better life and hope they have found it.

Art shows in Florida were difficult and costly to break into, so here they are freely practicing their art.

“We really want to become a part of the community,” K.O. said.

The two said anyone interested in having a class can email them at mrswaz@earthlink.net.