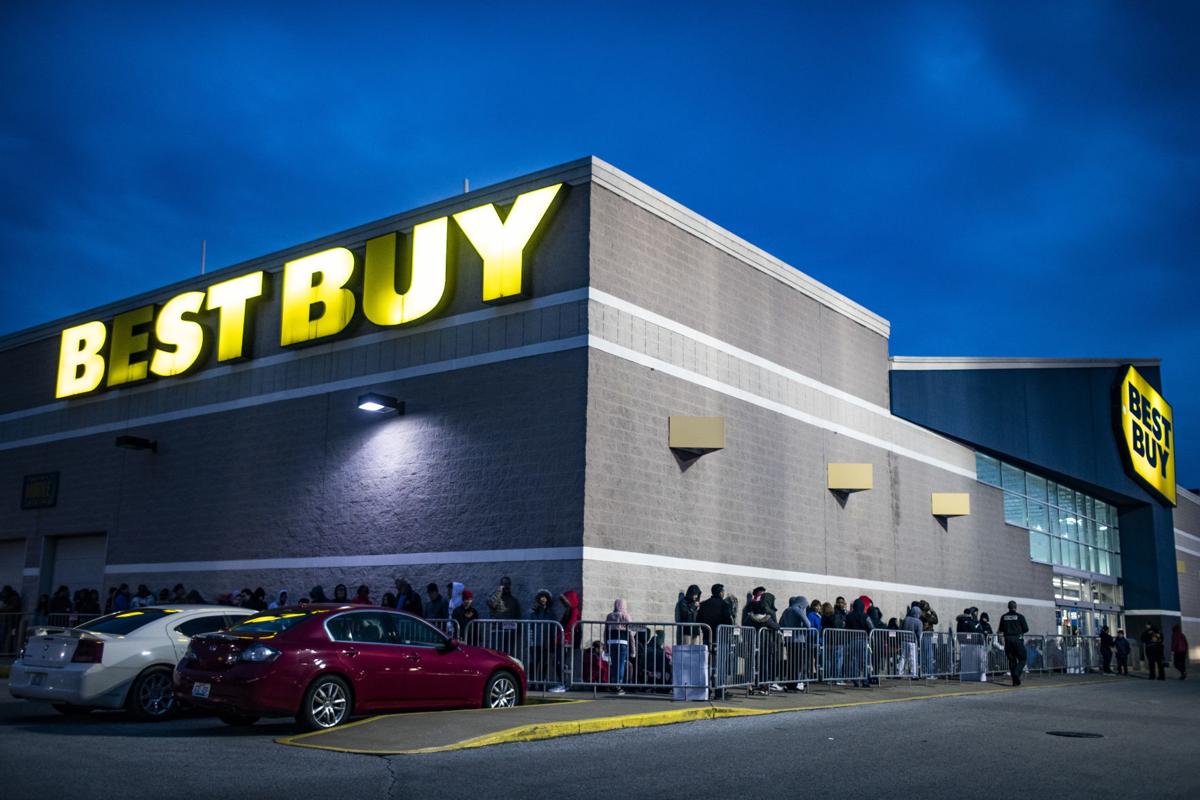 Shoppers line up for the opening of Best Buy on Thursday, Nov. 28, 2019. (Austin Anthony/photo@bgdailynews.com) 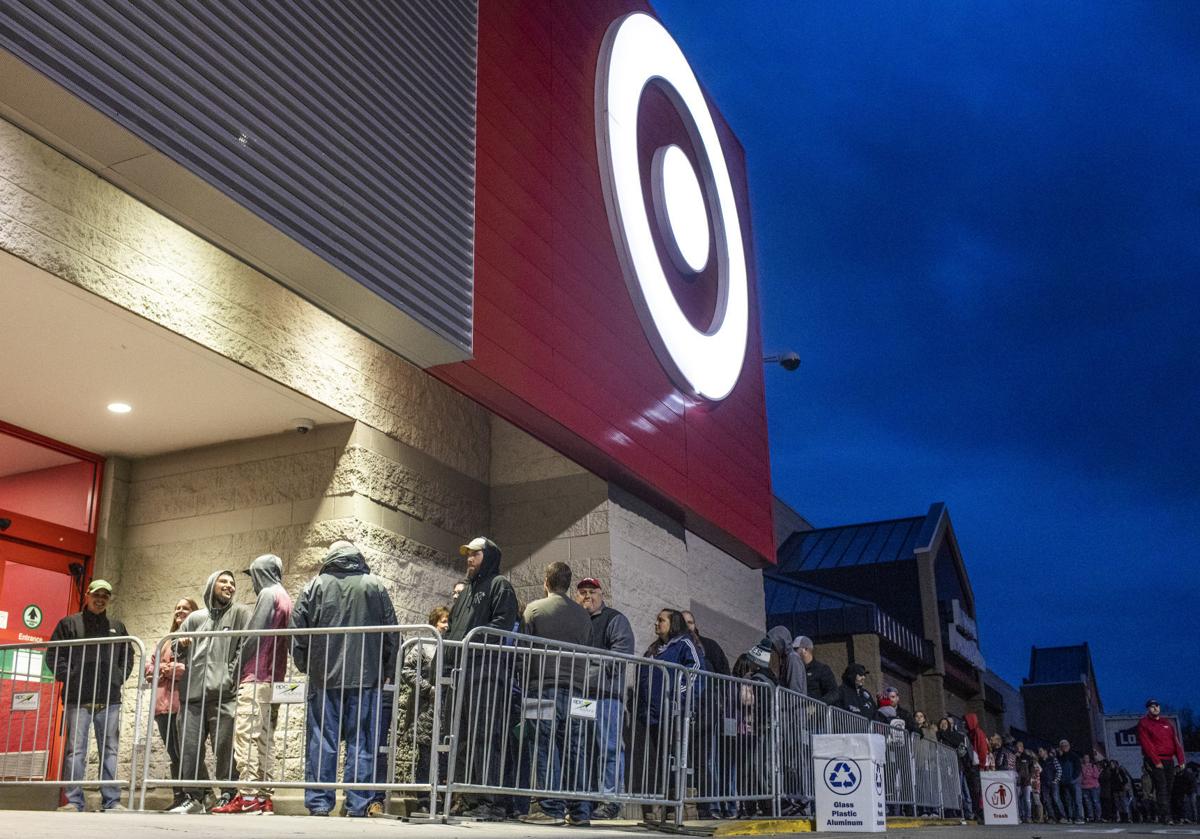 Shoppers line up for the opening of Target on Thursday, Nov. 28, 2019. (Austin Anthony/photo@bgdailynews.com) 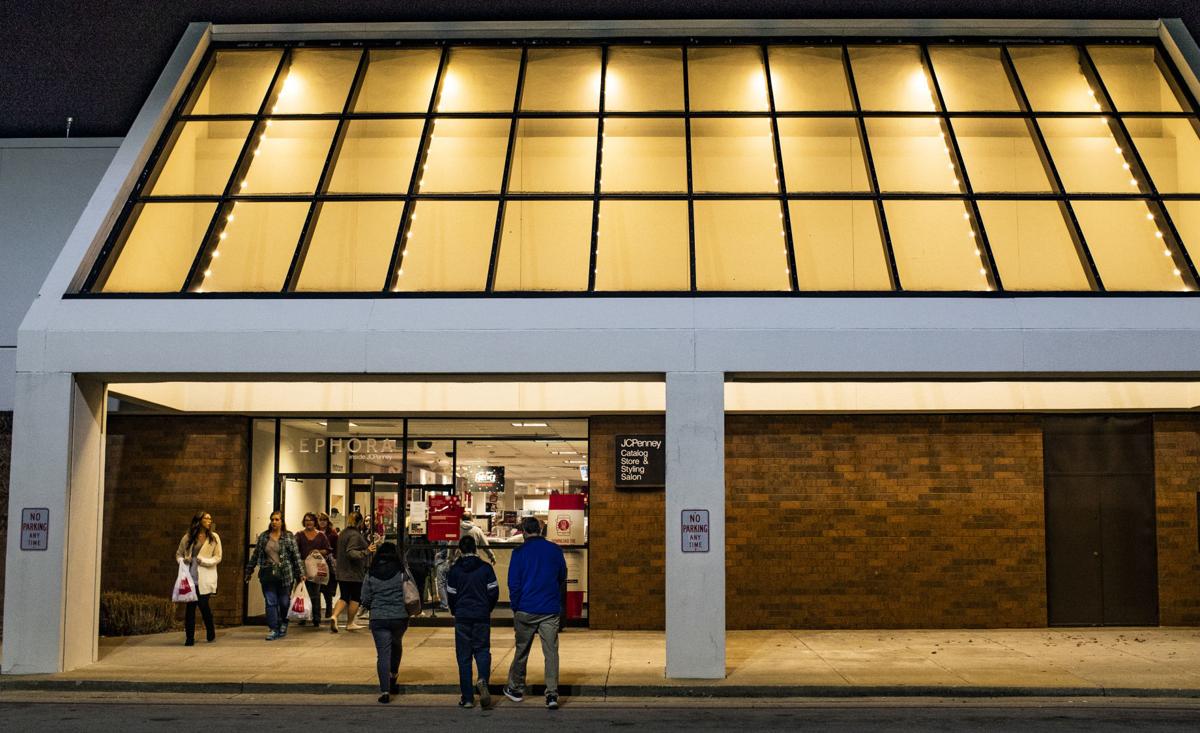 Shoppers go in and out of JCPenney on Thursday, Nov. 28, 2019. (Austin Anthony/photo@bgdailynews.com)

Shoppers line up for the opening of Best Buy on Thursday, Nov. 28, 2019. (Austin Anthony/photo@bgdailynews.com)

Shoppers line up for the opening of Target on Thursday, Nov. 28, 2019. (Austin Anthony/photo@bgdailynews.com)

Shoppers go in and out of JCPenney on Thursday, Nov. 28, 2019. (Austin Anthony/photo@bgdailynews.com)

Rashaud Blake was hunting for a bargain.

The 34-year-old found one Thursday at Best Buy in Bowling Green when he emerged from the big-box electronics retailer clutching a four-gigabyte Samsung Chromebook – for which he paid just $119.

It was a slightly more expensive model than the one he intended to purchase, but with double the storage space, he couldn’t pass it up.

“I like a good deal,” Blake said, hoisting his prize in a plastic bag. “I went ahead and got this one.”

Blake was just one of many shoppers, dozens of whom formed an orderly line in front of the building ahead of the store’s Thanksgiving Day opening. About 100 people queued up, a seemingly smaller crowd than last year, but the line still stretched around the corner of the building facing Scottsville Road.

Many hoped to get their hands on 40-inch smart TVs marked down to $180, or sound systems retailing for just $80 – a savings of $70 – and other door-busting deals.

For Misty Smith and her 18-year-old daughter Lexi, both of Bowling Green, the short wait proved too enticing to pass up.

“We weren’t planning to come shopping. We were just out driving around and happened to see there wasn’t a line, and so we stopped,” said Smith, 38.

They didn’t wait long, managing to secure the sixth spot in line by showing up about two hours ahead of Best Buy’s opening at 5 p.m. The two hoped to find bargains for a Nintendo Switch and the latest Mario Kart game for a relative’s Christmas present while stopping in to upgrade Lexi’s phone.

The chilly weather was no challenge for the mother-daughter duo, especially with their family’s Thanksgiving dinner out of the way. Every holiday season, their family prefers to spend most of their dollars locally on small businesses or chains that employ workers here, they said.

Standing in line, Lexi couldn’t help but notice what seemed to be fewer people waiting this year. She summed up her theory in two words: “online shopping.”

As it happens, a recent consumer survey from Prosper Insights & Analytics and the National Retail Federation – the world’s largest retail trade association – found that more than half of consumers (56 percent of those surveyed) had already started their holiday shopping by the first week of November. The survey of nearly 8,000 adult consumers was conducted between Oct. 31 through Nov. 6.

During this year’s holiday season, defined by the NRF as Nov. 1 through Dec. 31, sales are estimated to total between $728 and $730 billion, with the average consumer expected to spend $1,047.83 – an increase of 4 percent over last year.

Continuing a trend, clothing and accessories are the top gift category this year, purchased by 58 percent of those surveyed, according to the NRF. They’re followed by gift cards (54 percent), toys (39 percent), books, music, movies and video games (37 percent) and food and candy (32 percent).

“Consumers don’t wait for Thanksgiving or Black Friday anymore and neither do retailers,” Prosper Executive Vice President of Strategy Phil Rist said in a news release. “Retailers responded this year by offering promotions earlier than ever, with some rolling out holiday deals even before Halloween.”

“Thanksgiving is still a hallmark of the season, and there’s billions of dollars in shopping still to come. But many consumers have already been shopping for weeks, and retailers are increasingly adapting to that,” Shay said in the release.

Bianca Jones, of Best Buy’s public relations staff, said the retailer has adapted by accommodating shoppers’ differing preferences, and a big piece of that is a smooth shopping experience on Thanksgiving and Black Friday.

“We want to make sure our customers have the best shopping experience when they come to our stores,” Jones wrote, responding to questions in an email.

“This includes holding a Thanksgiving and Black Friday practice training in our stores to ensure we have a safe and smooth shopping experience … We also have a ticketing and line process, which begins about two hours before we open our doors on Thursday and allows for an orderly and smooth entrance into the store for our customers.”

The chain also offers free shipping throughout the holiday season for purchases through its website and convenient in-store pickup.

“All season long, we make it easy for Best Buy customers to shop when, where and how they want to – whether that’s in our stores, on BestBuy.com, or as often the case, a mix of both,” Jones wrote.

Shopping at Best Buy has become something of a recent holiday tradition for Dwight Burd and his family. On Thanksgiving Day, the 49-year-old from Glasgow was shopping for electronics with his college-bound daughter.

“She’s getting ready to graduate,” Burd said, adding that they were looking for a television and printer for her dorm room.

Preferring to shop both online and in-store for his gifts, Burd couldn’t complain about his experience with Best Buy in particular.

“They’re really good here. I’ve not had a bad experience yet,” he said, appreciating the customer service and products.

Still, he couldn’t help but think that obsession with gifts was pulling people’s attention away from the spirit of the season.

“It is a little distracting,” he said.