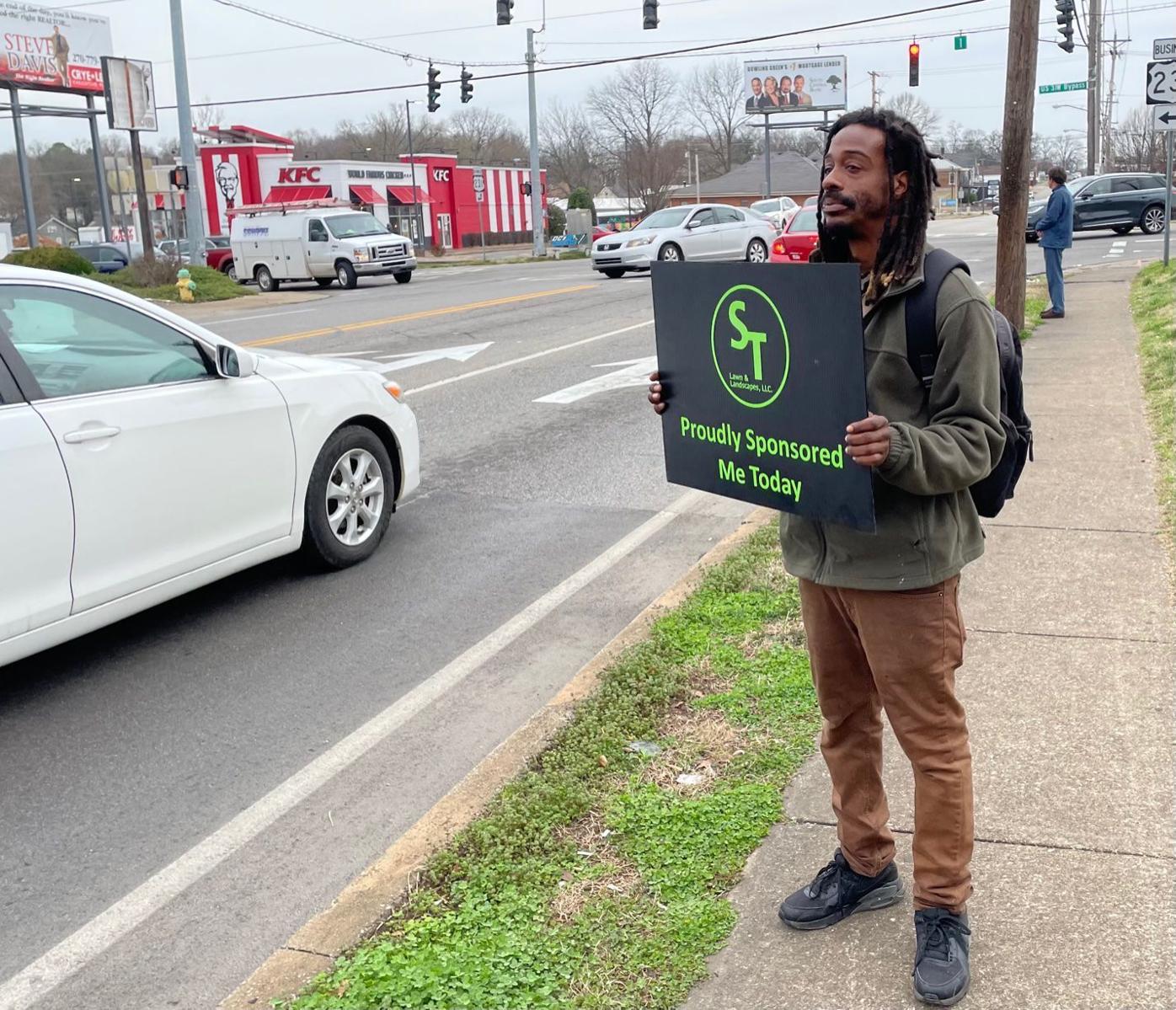 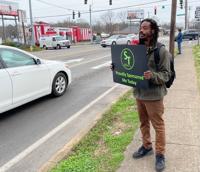 Bowling Green native Ian Sisson, homeless for the past two years, displays a sign for the Southern Touch Lawn Care company that is sponsoring him. 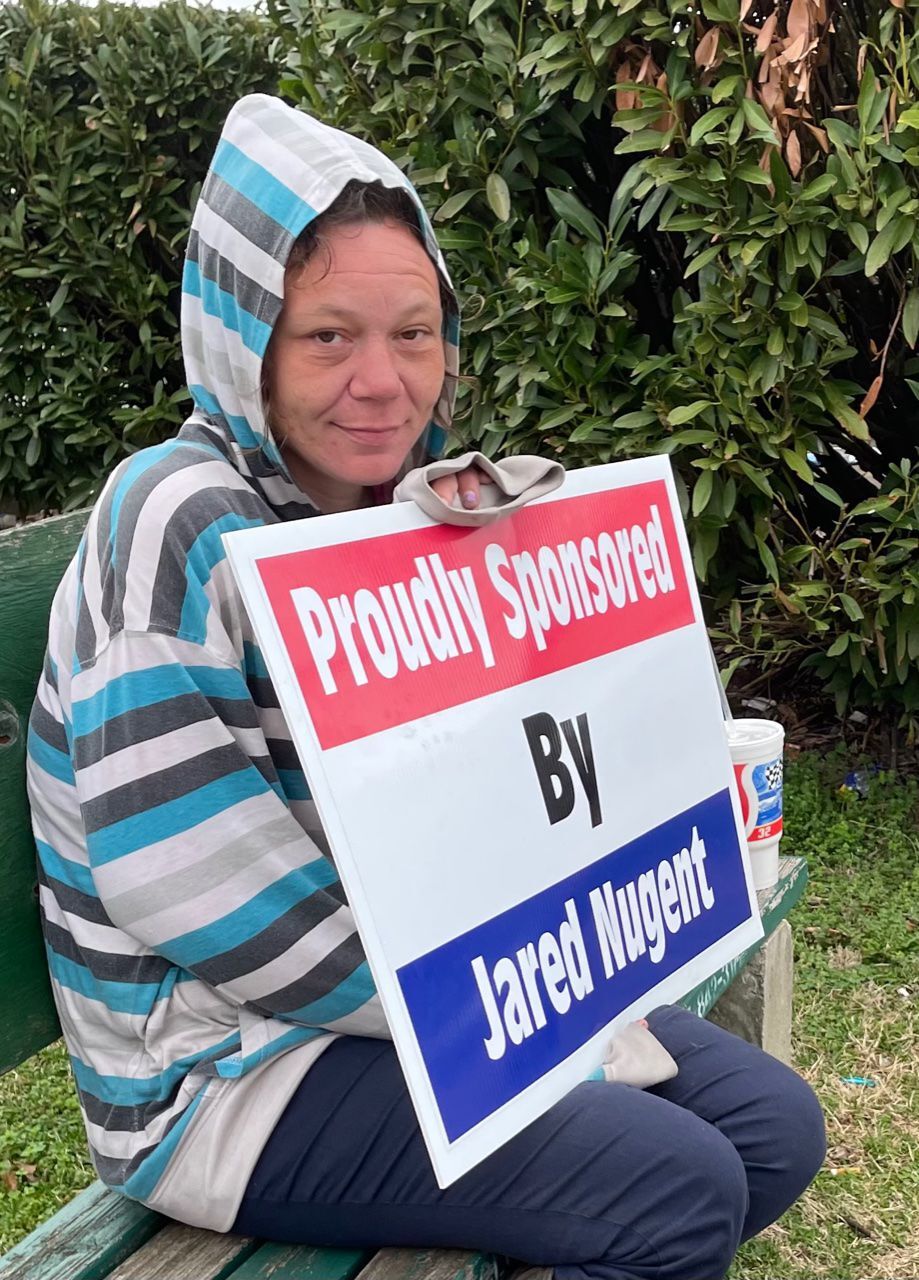 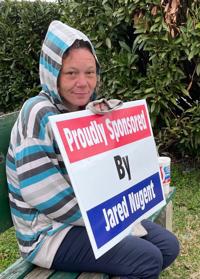 Lorena Coleman, a homeless mother of four, holds a sign for her sponsor, Realtor Jared Nugent. Coleman said the sign program has given her some hope after being on the street for the past two years.

Bowling Green native Ian Sisson, homeless for the past two years, displays a sign for the Southern Touch Lawn Care company that is sponsoring him.

Lorena Coleman, a homeless mother of four, holds a sign for her sponsor, Realtor Jared Nugent. Coleman said the sign program has given her some hope after being on the street for the past two years.

It’s a chilly March morning, the kind that would make you want to hit the snooze button and steal a few more minutes underneath the warm covers.

Except Ian Sisson doesn’t have that luxury.

A member of Bowling Green’s homeless population, Sisson is awake at sun-up and crawling out of his bedroll near the State Street branch of the Warren County Public Library.

It’s not raining, which gives Sisson and girlfriend Lorena Coleman some hope for a good day. The dry weather means they can “fly signs,” something they’ve been doing off and on for several months as a way to earn some guaranteed income.

A 35-year-old father of two, Sisson on this day doesn’t have to carry one of those homemade cardboard signs wielded regularly by the city’s panhandlers. Nor does Coleman.

Sisson is holding a sign promoting Southern Touch Lawn Care as he stands on the sidewalk near Taco Bell at Broadway Avenue and U.S. 31-W By-Pass. Coleman stakes out a different corner of the same intersection, holding her sign advertising local Realtor Jared Nugent.

Being a walking billboard is a vocation that would have seemed unlikely for Sisson or Coleman just a few years ago, but it’s an opportunity they gladly embrace today.

“It’s better than nothing,” Sisson said. “It’s hard out here without it. The police will get on you if you’re panhandling, but if you’re flying a sign they won’t bother you.”

Flying signs, Sisson said, was an idea brought to him last year by Alex Sewell, owner of Southern Touch.

“One day we came out to this intersection, and Alex came by and gave us the opportunity to fly a sign,” Sisson said. “He said he was trying to eliminate panhandling.”

Sewell said the idea grew out of a conversation with his 8-year-old son.

“We were talking about the homeless, and he encouraged me to do something to help them,” Sewell said. “Instead of giving them a handout, I thought we’d give them a job and call it more of a partnership.”

That first encounter led to an ongoing relationship with Sisson that has spread to other businesses that pay $50 a day to the sign-flyers.

“I explain to them that they’re helping me and I’m helping them,” Sewell said. “They’re actually earning the money.”

Brad Poland, owner of Bowling Green’s B&M Construction, got on board right away with Sewell’s plan to help the homeless.

“Alex brought the idea to me, and I told him I’d pitch in,” Poland said. “There for a while we had all seven days scheduled.”

Poland said flying signs helped some of the homeless get off the streets during the winter.

“They were needing money for a hotel room, but they couldn’t afford it,” he said. “I’d pay for the hotel room for a week and let them work it off by flying signs. It worked out good for a little while.”

Poland, whose business is primarily in residential remodeling, said his motivation for getting on board with Sewell’s plan is more about helping those in need than about promoting his business.

“I don’t think I’ve ever gotten any business out of it,” he said. “But I don’t mind doing it to help somebody out.”

Nugent, who is with RE/MAX Real Estate, said he has gotten a response from the signs. “I had a sign during Christmas that said ‘Happy Holidays,’ ” he said. “I was surprised at how many people called and asked me about it. I will definitely do it again.”

If nothing else, the partnerships started by such business owners are giving hope for homeless residents like Sisson and Coleman, both of whom have known better times.

Sisson’s dreadlocks and beard now make it hard to recognize him as the former star athlete whose speed carried him to a regional championship in the 800-meter run on the track and to a state runner-up showing as a member of the 2003 Greenwood High School cross country team.

He remembers those days fondly, and he recalls wistfully the years he spent as a professional cook before an arrest four years ago on drug and firearm charges derailed his career.

“I got in trouble and went to jail for two years,” said Sisson, who had worked at Red Lobster, IHOP and other local eateries. “Ever since then I’ve been on the streets. It has definitely made it hard to find work.”

Coleman, 38, has a similar hard-luck story that started when she lost her job as an aide at the Fern Terrace retirement community a couple of years ago.

“I had a house and a car, and then one day that’s gone,” said Coleman, who has four children. “I lost my job, and then it was like a domino effect.

“Bills started piling up, then I ended up selling my vehicle to get baby formula. Temporarily homeless seems to have turned into permanently.”

Sisson and Coleman were able to find shelter at local churches through the Room in the Inn program during the winter months, and they have used that organization’s mailing address to help them tap into what federal assistance is available.

Flying signs helped them rent a hotel room for a short while, but both are looking for the type of stable employment that would allow them to afford a permanent home and reunite with their young children who are now with family members.

As Coleman has discovered, though, getting off the streets isn’t easy.

“Being outside every day gets to you,” she said. “You can’t properly eat and keep your health up. Then your appearance hurts when you’re trying to find work, and you have no transportation.”

Both Sisson and Coleman say they’re grateful for the help from the sign-flying idea cooked up by Sewell, although they’d like a steadier source of income.

“It seems like he (Sewell) really cares,” Coleman said.

He has now started the busy season for his lawn care business, but Sewell said he still hopes to find time to expand the sign-flying idea to other businesses willing to sponsor those living on the streets.

“If I could get 20 businesses involved, we could fill up a month,” he said. “We’ll continue to do it, but not every day.”