Simpson County became the third Kentucky county to approve the initial reading of an ordinance that would designate it as a right-to-work area.

Fulton County Judge-Executive David Gallagher said the county’s ordinance wouldn’t exclude unions but would put them in a position to compete for workers.

“Of course we’re on the Tennessee border, and we have to compete with them, so this just levels the playing field,” he said.

Simpson County Magistrate Blake Tarpley, who made the motion to approve the ordinance, said after the meeting that he believes right-to-work would be a positive change for the county.

He said he believes the county has lost business to Tennessee because of the right-to-work issue. “I just don’t want us to lose those opportunities again,” Tarpley said.

The ordinance would forbid requiring any employee covered under the National Labor Relations Act to join a union, or refrain from joining a union, as a condition of employment.

Simpson County Judge-Executive Jim Henderson said Kentucky not being a right-to-work state can be an obstacle for businesses and industries looking to locate in the state.

“Quite frankly, I do think that sometimes it’s more perception than reality in terms of what it means to companies that are looking to locate,” he said. “Simpson County, for example, does not have any active union plants now, and so obviously that would signal to prospective business and industry that we have a pro-business climate.”

Henderson said whether the right-to-work issue is real or simply perceived by businesses, it’s something that comes up for counties in the state.

Jim Waters, president of the Bluegrass Institute in Bowling Green, said he expects about 25 counties to approve right-to-work ordinances in the next year.

He believes that will send a message to Frankfort that it needs to act on the issue.

He said that under a right-to-work ordinance, labor organizations would be negotiating for and representing people who don’t pay dues to support the organization.

Companies that move to right-to-work states often do so seeking cheaper labor, but negotiations by unions help boost wages in non-union workplaces nearby, Renaud said.

“Everyone benefits from union wages,” he said.

Those statutes give counties the ability to do things such as regulate commerce for the protection and convenience of the public and promote economic development.

But Ariana Levinson, associate professor of law at the Brandeis School of Law at the University of Louisville, said in a phone interview Tuesday that the National Labor Relations Act preempts the ability of counties to pass right-to-work ordinances.

The act includes an exemption for states and territories to pass such statutes, but that same exemption does not apply to counties or cities, she said. There are other sections of the law that do apply to cities and counties, but language is different from in the exemption that allows right-to-work legislation.

“They’re very clear when they want to include states and localities,” Levinson said. “They use different language.”

A Kentucky Court of Appeals case, Kentucky State AFL-CIO v. Puckett, also held that the city of Shelbyville did not have the right to pass a local right-to-work ordinance, she said.

“The case was from 1965, so this is a very well-established legal concept,” Levinson said. 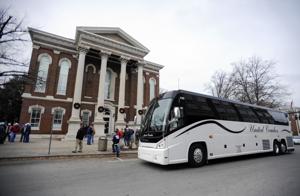 In December, Warren County became the first Kentucky county to approve a right-to-work ordinance that forbids requiring any employee covered u…

Other counties could follow Warren County in taking up their own right-to-work ordinances in the near future.