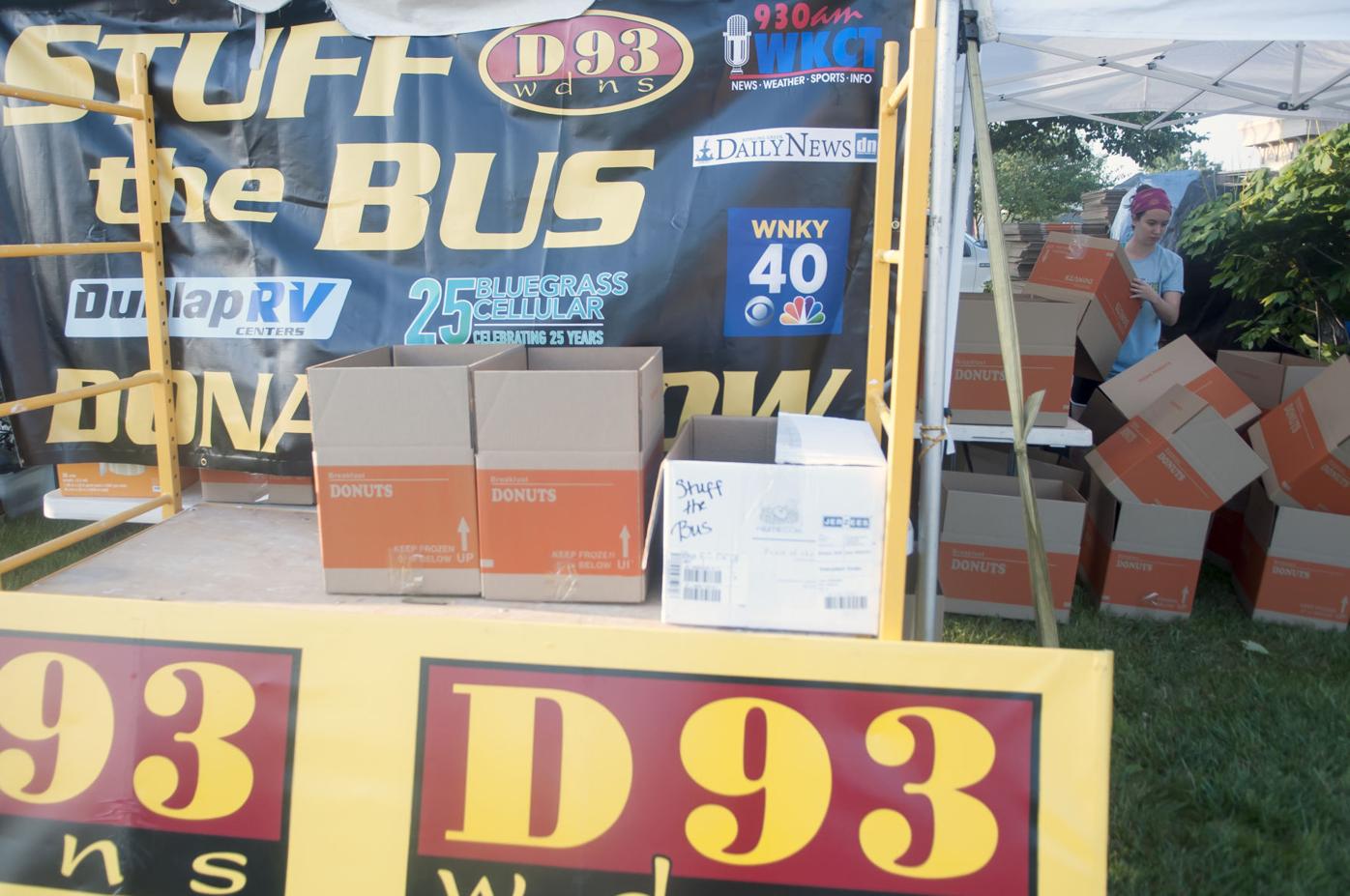 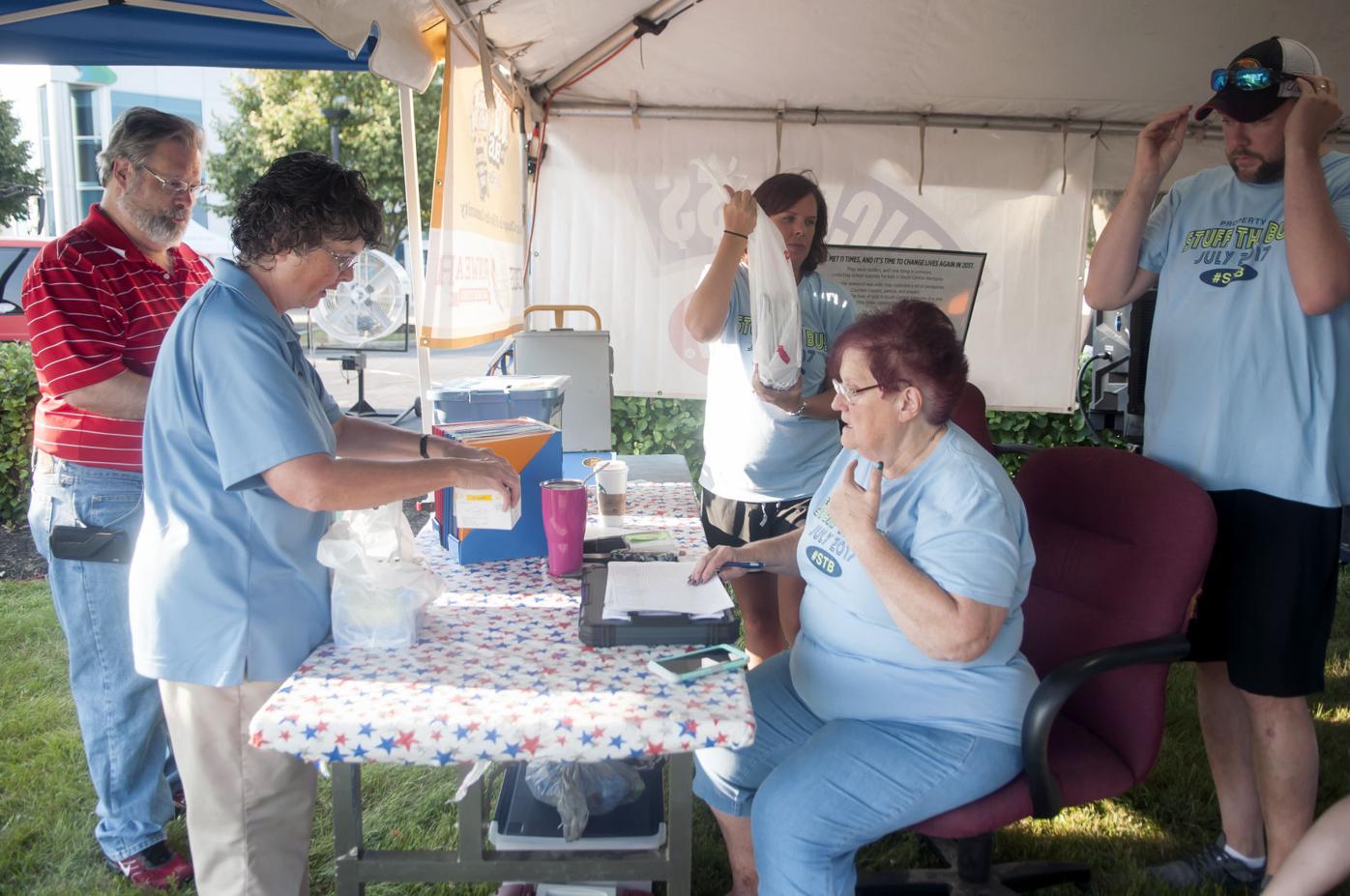 Eric Lindgren (left) and his wife Kim Lindgren, both of Bowling Green, drop off school supplies Thursday, July 20, 2017, during the Stuff the Bus drive at Bluegrass Cellular on Campbell Lane. (Bac Totrong/photo@bgdailynews.com) 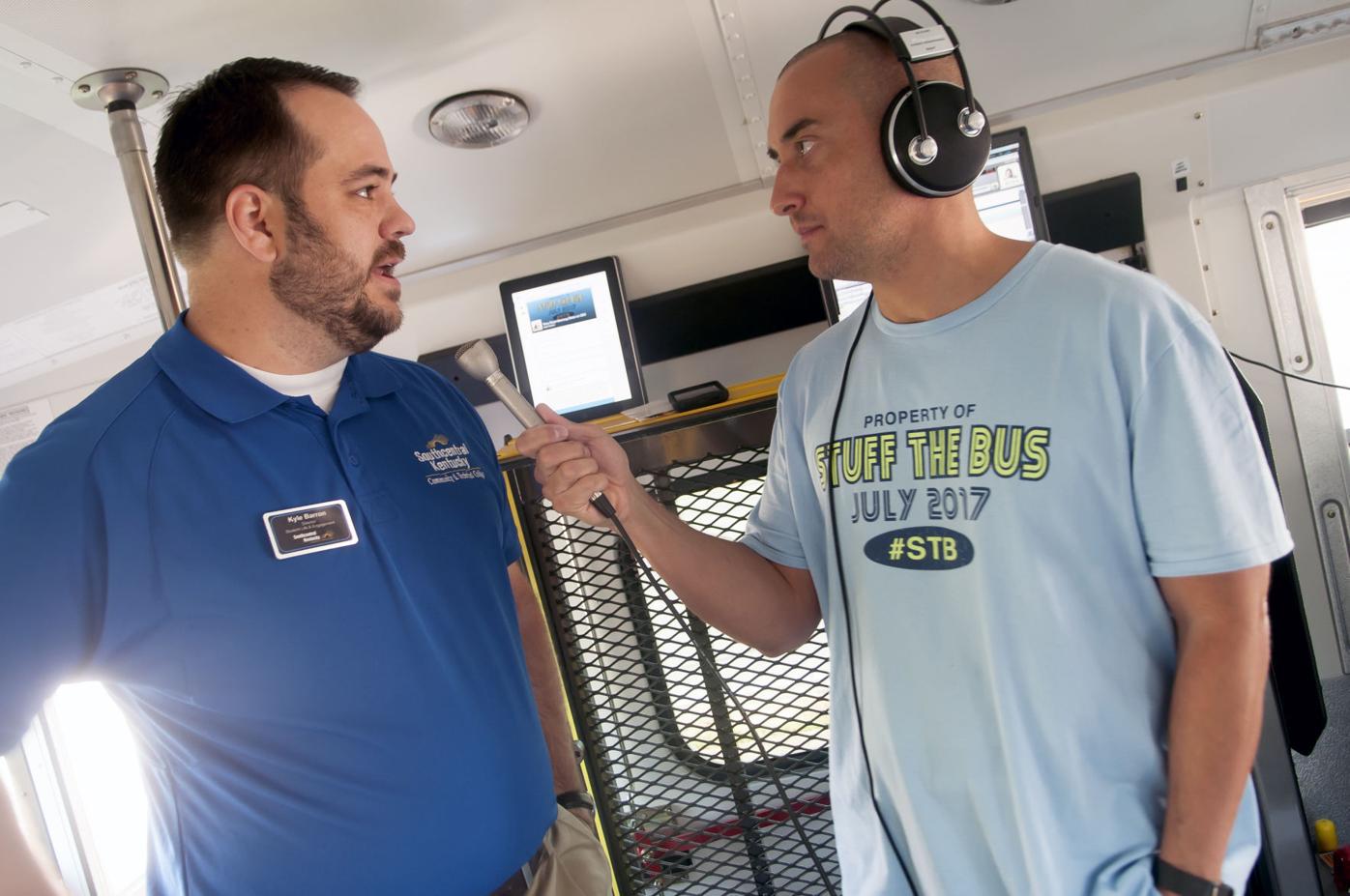 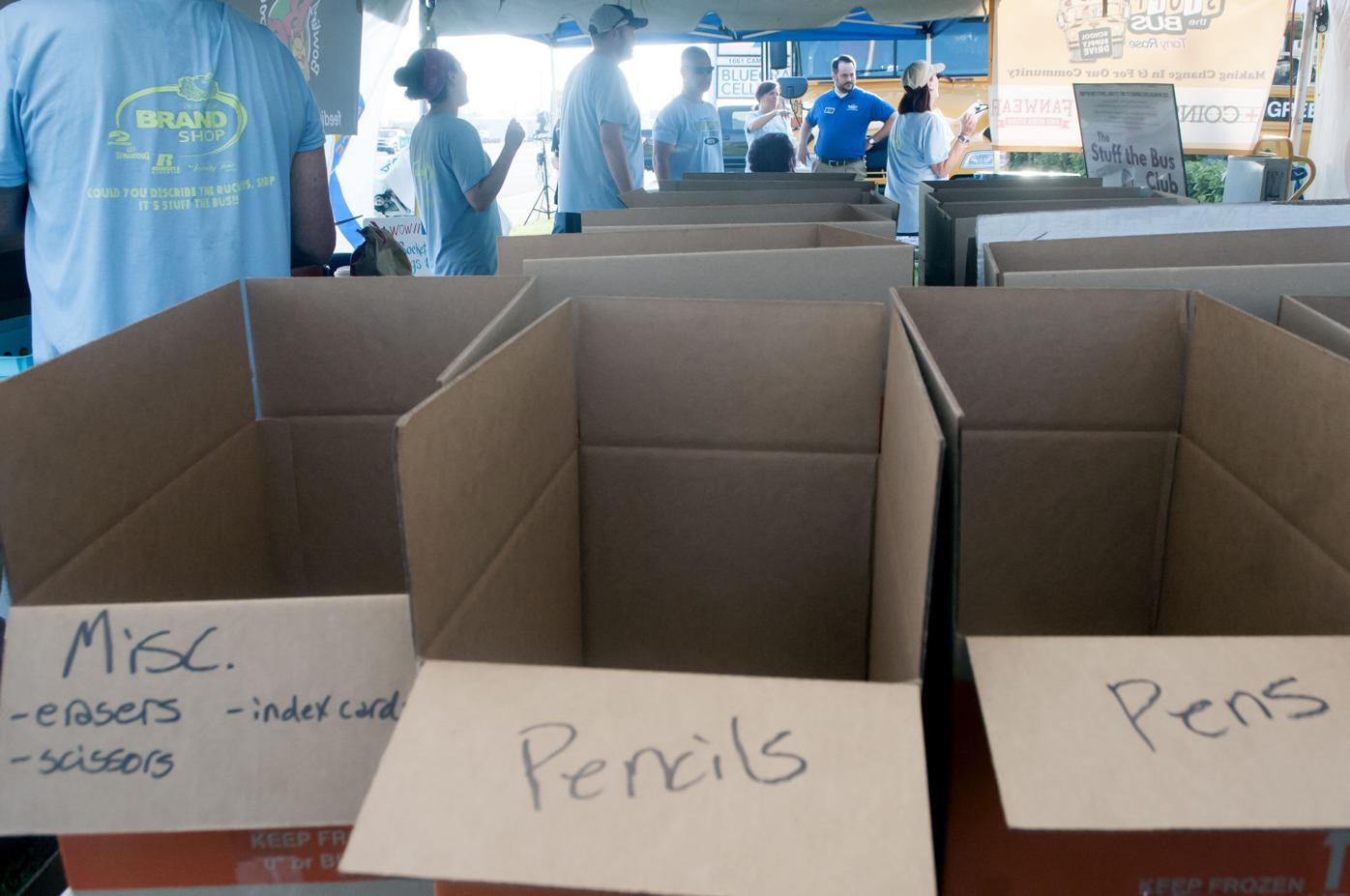 Volunteers set up Thursday, July 20, 2017, in preparation for the Stuff the Bus drive at Bluegrass Cellular on Campbell Lane. (Bac Totrong/photo@bgdailynews.com) 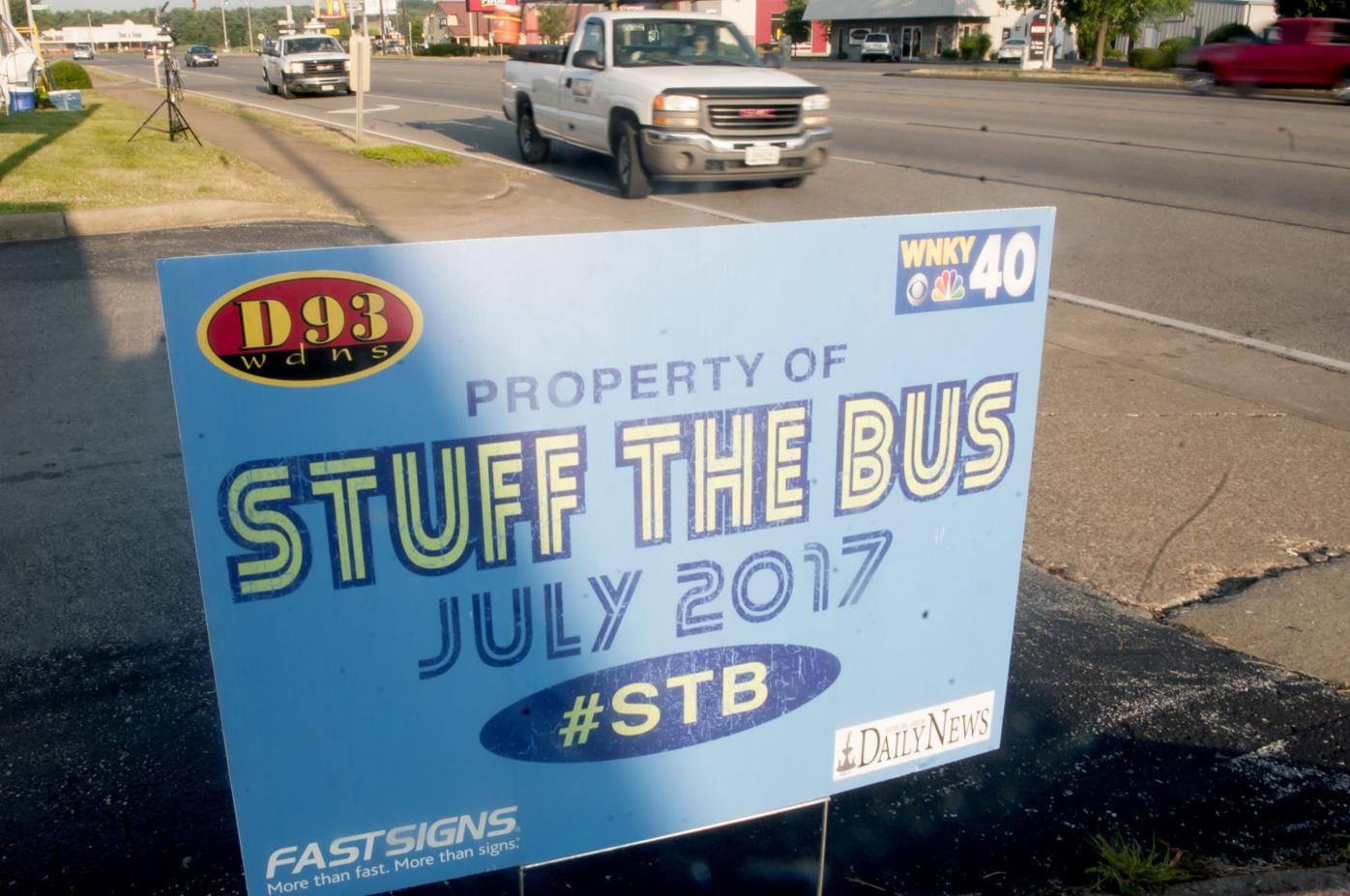 Eric Lindgren (left) and his wife Kim Lindgren, both of Bowling Green, drop off school supplies Thursday, July 20, 2017, during the Stuff the Bus drive at Bluegrass Cellular on Campbell Lane. (Bac Totrong/photo@bgdailynews.com)

Volunteers set up Thursday, July 20, 2017, in preparation for the Stuff the Bus drive at Bluegrass Cellular on Campbell Lane. (Bac Totrong/photo@bgdailynews.com)

Evidence of what the Stuff the Bus school supplies drive has become is all around Tony Rose as the local radio personality surveys the scene in front of Bluegrass Cellular on Campbell Lane.

What started as a radio stunt 12 years ago has grown into an anticipated event with a circus feel.

Thursday morning, three buses from Bowling Green and Warren County schools were already parked and ready for loading. Volunteers were at work setting up tents and tables and a system for cataloging all the donations that are sure to come in over the next four days.

It’s not what Rose may have envisioned back in 2006 when the young radio DJ dreamed up the idea of living on a bus until it was stuffed with school supplies.

He collected two tons of notebooks, pencils, crayons and other items that first year to help youngsters in Warren County. The event was barely in first gear then. Last year, it reached cruising speed as more than 16 tons of supplies were collected and distributed to children in need through school family resource centers and other organizations throughout southcentral Kentucky.

“To see how this event has grown over the last 12 years is amazing,” Rose said Thursday morning as the WDNS-FM (D-93) morning show host set up shop in one of the buses. “It was me and three or four volunteers sweating it out around the clock.

“Seeing how many children and families are affected and seeing the community truly adopt this event the way they have over the past 12 years is humbling.”

One of those volunteers, Johnny Watkins of the Warren County Public Schools Transportation Department, has been with Rose from that first year. Unlike Rose, though, Watkins doesn’t seem surprised by the event’s growth.

“Believe it or not, I told Tony that first year that this thing was going to get so big that he wouldn’t even recognize it,” Watkins said Thursday as he helped set up the buses. “And it has. It gets bigger each year.”

The growth threatens to overwhelm the small area in front of Bluegrass Cellular. But Maria Higgs, Bluegrass Cellular’s district manager, welcomes all the activity on what amounts to the front lawn of the company’s Bowling Green location.

“Our customers love it,” she said. “They ask a lot of questions during Stuff the Bus, like ‘Why do you have a school bus in front of your store?’ But they enjoy it, and they enjoy meeting Tony and his crew.”

Higgs said Bluegrass Cellular has embraced Stuff the Bus, not just in Bowling Green but in all seven locations in the district she oversees.

“One of our motivations as a company is to give back to the community,” she said. “Stuff the Bus is a big way for us to do that. We do donations at our stores for the whole month of July.

“People in communities like Russellville, Leitchfield and Glasgow can donate school supplies in those communities, and Stuff the Bus will match those donations.”

Higgs and other employees at Bluegrass Cellular’s Bowling Green store were working out of a trailer for a while after a May fire damaged the building, and she is glad they were able to move back into the building in time for Stuff the Bus.

“We have a great location here that is very visible on a busy road,” she said. “We’re glad to do our part to help out.”

Another company that has embraced Stuff the Bus is McDonald’s. On the day before the event’s kickoff, some McDonald’s employees divided into two teams that used $200 each provided by the fast-food chain and competed in a shopping spree to benefit the school-supplies drive.

“The teams shopped at Walmart to see who could get the most items,” said Alex Burrell, an owner/operator along with her father and brother of 14 McDonald’s restaurants. “We’ll take the stuff to Tony at the bus, and we’ll donate money as well. We’re really excited to help him. We see the impact Stuff the Bus has in the community.”

Burrell said McDonald’s will take food to Rose and his volunteers at the buses, and she will also arrange for the “Hamburglar” mascot to visit the site.

“Tony is a great guy who does a lot for the community,” Burrell said. “We’re glad to help him out.”

As is Julie Milam, general sales manager for WNKY Television in Bowling Green.

“There’s no place we would rather be,” said Milam, who was helping with the setup Thursday morning. “This event really looks at all the children in need in this region. We want to make sure every child is completely prepared for the first day of school, no matter the ability of their family to provide those supplies.”

Rose, who has seen the event grow to the point that he now awards Stuff the Bus scholarships each year to family members of bus drivers, tries not to get caught up in measuring the event’s success in tonnage.

“I like to have the perspective that it’s not about how much weight we collect,” he said. “It’s about getting the items that kids need.”

Stuff the Bus sees another record haul despite sweltering Saturday

Year after year, area residents continue to stuff the bus, and then some.