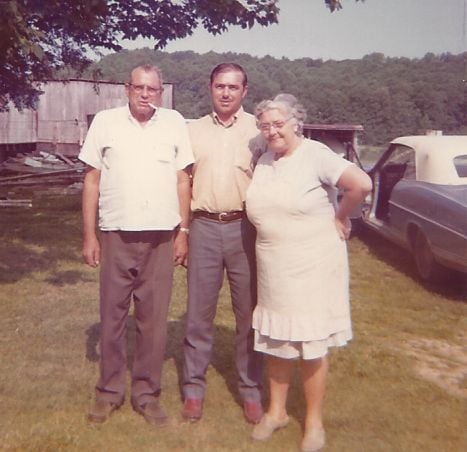 The last picture of Larry Key (center) was taken in July 1972 shortly before his death. He is standing with his parents, Kelly and Lillian Key, at the Key homeplace in Edmonson County. The car in the background was the one Larry Key was driving when he was killed on July 28, 1972. 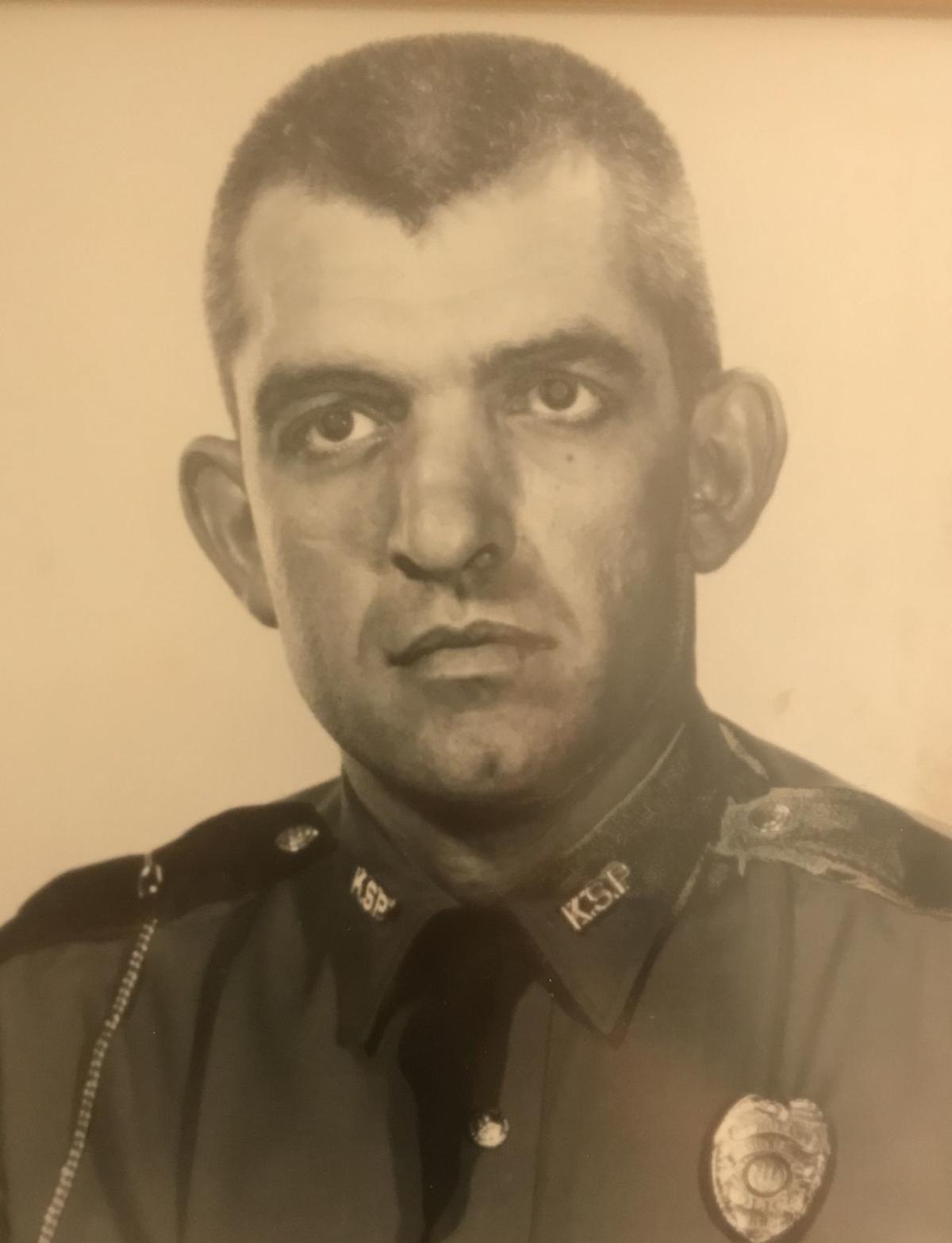 The last picture of Larry Key (center) was taken in July 1972 shortly before his death. He is standing with his parents, Kelly and Lillian Key, at the Key homeplace in Edmonson County. The car in the background was the one Larry Key was driving when he was killed on July 28, 1972.

There have been an untold number of investigations into the killings of Larry Key and Kentucky State Police Trooper William Barrett in the almost half-century since they occurred.

The investigators have ranged from KSP detectives who specialize in cold cases to members of Larry Key’s family, who remain committed to finding justice.

But the hope for criminal prosecutions is tied to thin threads of largely circumstantial evidence. What can weave those threads together is the testimony of those who know something about the cases. It is likely that any chance for prosecutions today depends on those individuals coming forward.

Hopes that that will happen are still alive in those who remember Key and Barrett.

The case of Larry Key, killed on the Glendale Interstate 65 exit ramp July 28, 1972, is being handled by KSP Post 4 in Elizabethtown.

That post’s public affairs officer, Trooper Scotty Sharp, confirmed the Key case remains active, but could offer few details on the current investigation. The detective currently in charge of the case was not available for an interview.

But Sharp said the post is continuously looking for information regarding Larry Key’s death.

“When they go unsolved this long, it really comes down to needing the public’s help. Somebody knows something, no matter how small ... it might just be the small piece of the puzzle we need,” Sharp said.

He said no investigator wants to move on from a case without a resolution.

The investigation into the shooting death of Barrett, killed outside his Rockfield home early on the morning of Dec. 19, 1971, is being handled by KSP Post 3 in Bowling Green.

The current lead investigator in the Barrett case is veteran KSP detective Gary Travis, who took on the investigation in 2018 and began by reviewing the volumes of information about the case. He then began reinterviewing witnesses who are still alive.

“A murder investigation is never really closed,” Travis said, but a stalled one can benefit from a new perspective. “It always helps to have a fresh set of eyes.”

The initial investigation covered a lot of ground, according to Travis.

“There was a ton of information flowing initially ... leads were followed diligently,” Travis said, but they resulted in “many dead ends.”

Travis said the killing could be related to Barrett’s job, personal life and even a random case of someone deciding to kill a police officer.

We are “investigating all theories and leads,” he said.

Travis does not discount the Key family contention that the Barrett and Larry Key killings are linked. “It’s a possibility,” he said. “That’s one of the working theories.

“This certainly was a very complex case,” Travis said, and the methods used to investigate killings in 1971 were not as advanced as today.

“The technology we use to process evidence is light years ahead of what it was then,” he said.

There were no such things as DNA testing or 3D crime scene imagery in 1971. And the weapon used, a shotgun, lacks a unique ballistic signature. That means it would be extremely difficult to link a particular weapon to the crime.

The elapsed time is also a barrier to the investigation.

Two of the original KSP investigators were both killed in the line of duty and there is “not a soul” in the agency still active from 1971, Travis said.

“People move on and go on with their lives,” Travis said.

The bottom line is that what is likely needed to solve the case is a “good credible witness that has information that we can corroborate,” he said.

The two killings remain on the minds of many in southcentral Kentucky.

Retired KSP state trooper and former Warren County Sheriff’s Office Chief Deputy Tommy Smith started working for KSP in 1989. He was on administrative duty at Post 3 in 1990 when the Barrett report first came across his desk.

“I read it cover to cover,” Smith said.

He believes the crime was clearly a planned execution.

“Whoever did it had some idea of his schedule ... they also called him by his name when they shot him,” Smith said.

Smith went to Texas, Florida and Minnesota to talk to people who might have information regarding the case. But no break came, and time is the enemy of justice.

As for the theory that the killings of Key and Barrett are linked: “From the outside looking in, it could be possible ... a lot of it makes sense,” Smith said.

Former Bowling Green Police Department officer and chief Gary Raymer was on patrol the night Barrett was shot. He was among the first on the scene at the Rockfield trailer park where Barrett was gunned down.

He also believes it was a well-orchestrated murder.

“From my perspective, whoever did it was a professional,” Raymer said. “It was an intentional hit.”

A shotgun is not only a deadly weapon, it is largely untraceable, said Raymer, who also believes at least two people were involved: the shooter and the driver of a getaway car.

They knew the area well enough to drive away without arousing suspicion, he said.

Local author Gary West said the Barrett case especially is still discussed in certain circles. While working on a book about another crime, he visited a convicted murderer in jail, who told him he knew who killed Barrett.

The inmate’s identification of the killer, however, is suspect because he got some of the primary details wrong, West said.

In both the Key and Barrett cases, there are no publicly named suspects or persons of interest. One person, however, has been identified by several sources as possibly being involved in their deaths. The person is a former member of law enforcement who still lives in southcentral Kentucky. The individual has links to both Barrett and Key, and was allegedly working with the drug dealers who may be responsible for their deaths.

As of today, the person has not been charged or publicly named by law enforcement as a suspect or person of interest in either case.

“I’m not at liberty to discuss persons of interest that I’ve developed,” Travis said. “I will say that they were contemporaries of Barrett.”

Despite the passage of time, hope for justice remains.

Larry Key’s son, Todd Key, said there are Key “family members who know all the details, but won’t come forward.”

Former KSP trooper and BGPD officer Joe Denning, a friend of Barrett’s who had dinner with him just hours before he was killed in 1971, thought at the time it would be solved.

“I feel it should have been solved by now,” he said. With numerous transitions in KSP leadership, “I feel this case was put on the back burner. ... It bothers me” that it has not been solved, Denning said. He said he was interviewed earlier about the case for the first time.

“There are a lot of doors open as to what happened,” he said. “I think every effort possible should be made to solving the case. There are people out there (who know what happened). Where are they? It’s something that needs to be solved.”

Travis said that while the KSP investigates all crimes with the same rigor, he and his fellow KSP officers are “still grief stricken at (the) loss of a fellow trooper ... the KSP is a brotherhood,” he said. “This case is as important to us today ... as it was on Dec. 19, 1971.”

There is some hope that the elapsed time could also work to the advantage of investigators.

“We never give up hope that at some point we’ll get the information” that could solve the killings, said KSP Post 3 Public Affairs Officer Trooper Daniel Priddy. “Trooper Barrett’s murder will continue to be worked until we solve it. ... Trooper Barrett was one of ours.”

Larry Key’s widow, Renetta Wilson, has been working tirelessly to get such justice, even as she said she faces scorn from some of her late husband’s family members, setbacks and closed doors.

She said that six months after Larry Key’s death, someone broke into her home and left a 6-foot length of two-by-four that had been whittled into a club on her bed.

Todd Key said they believe this was a not-so-subtle warning that his mother should stop her quest to bring Larry Key’s killers to justice.

The Ambush Killings, Part One: Two 1970s shootings remain unsolved, but not forgotten

In the early 1970s, William Barrett and Larry Key shared many similarities. Both men were in…

About four in 10 people who commit a murder in the U.S. will get away with it, according to …