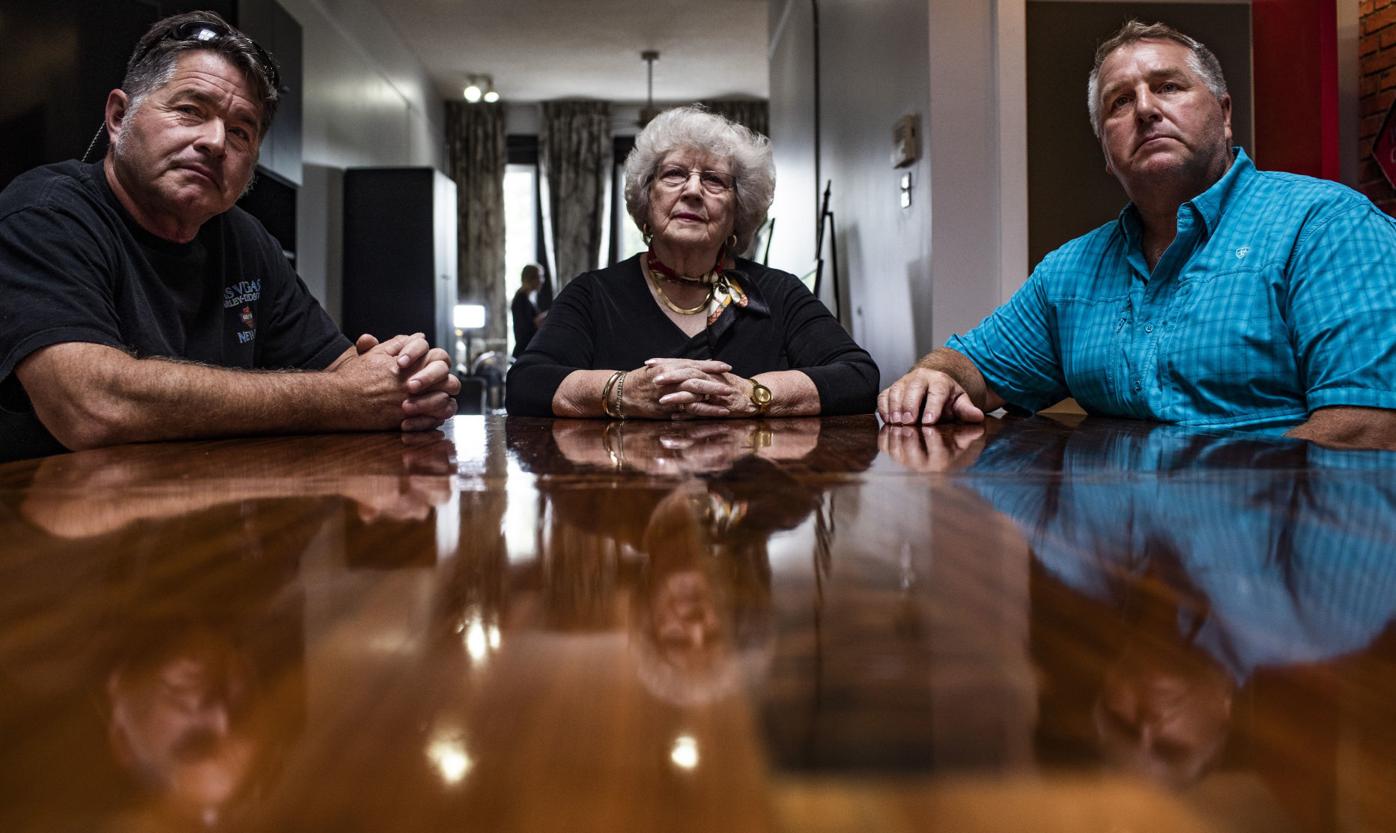 Todd Key (from left), Renetta Wilson and Brad Key pose for a photo on Saturday,July 20, 2019, in Bowling Green. 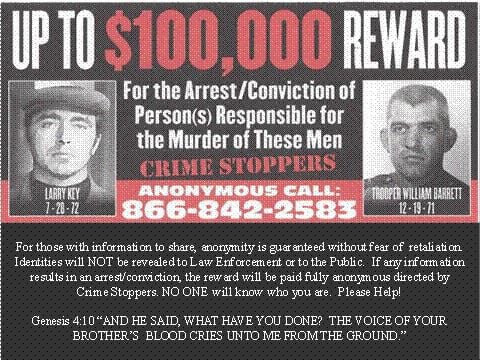 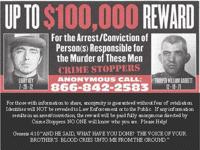 Billboards with this message were put up in Bowling Green, Glasgow, Cave City and Edmonson County by members of the Key family in recent years.

Todd Key (from left), Renetta Wilson and Brad Key pose for a photo on Saturday,July 20, 2019, in Bowling Green.

Billboards with this message were put up in Bowling Green, Glasgow, Cave City and Edmonson County by members of the Key family in recent years.

About four in 10 people who commit a murder in the U.S. will get away with it, according to data from the FBI.

So perhaps it is no surprise that the killings of Larry Key in 1972 and William Barrett in 1971 remain unsolved.

How the Barrett and Key cases differ from many other unsolved killings from decades ago is that they remain active, with witnesses being interviewed as recently as this year. And in the case of Larry Key, his widow and sons have turned the search for justice into a consuming mission.

Larry Key’s widow Renetta – now Renetta Wilson after remarrying – moved to Iowa a few years after his death along with their sons, Todd and Brad. They have since moved to Texas.

For Renetta and her sons, the puzzle of what happened to their husband and father remained a constant question over the decades, but took a new urgency in 2014. That’s when the family was contacted by Kentucky State Police saying detectives were taking a new look at the case. Since then, the family has traveled frequently back to Kentucky and talked to numerous law enforcement officials. They were given information about the killing they had not been privy to before.

Renetta and her sons also took it upon themselves to talk to anyone they could find who might have information. They obtained records, started a Facebook page and put up billboards announcing their reward of up to $100,000 for information about the deaths of Larry Key and Kentucky State Police Trooper William Barrett. Renetta and her sons believe whoever killed Larry Key also killed Barrett.

“We took off like racehorses out of the gate,” Renetta said about the renewed interest in the case.

“At that time, we believed the case was a slam dunk,” Brad Key said. “We believe there is enough evidence in the police reports ... with the Barrett files and my father’s murder files, to get an indictment.”

But as the years went by, the belief that an arrest might be imminent dissolved. Instead, the family now believes that the renewed investigation remains a low priority marked by missteps – in 1972 and today.

“We’re getting very skeptical” of the investigation, Renetta said earlier this year.

As an example of the alleged investigative mistakes, Renetta said a roll of film related to a blackmail attempt of Larry Key in January 1972 was only recently found, undeveloped, at the KSP office in Frankfort.

Renetta also said that just this summer, the KSP turned down her request to refer the case to a group of retired law enforcement professionals who investigate cold cases.

“I think they want to shut us down and move on,” she said.

The circumstances “makes it look like this case is dead, as far as the Kentucky State Police is concerned,” Todd Key said. (A spokesman for KSP Post 4 in Elizabethtown, which is handling the Larry Key investigation, said last month the case is still active. More on the current investigation will be outlined in Part Four of this series Nov. 17.)

The fact that Larry Key had been arrested in November 1971 and charged with drug dealing has, they said, also made the case a lower priority.

“Most likely, in this life, we will not get justice,” Renetta said. Because of her late husband’s involvement in the drug trade, “the focus isn’t there.”

“I make no excuses for my father’s activities” but he was not a stereotypical drug dealer, Todd Key said. “He was a family man, he went to work, he came home (but) we make no excuses ... he trafficked amphetamines to truck drivers (and) there was a price to pay due to his own activities.”

It is that involvement in the drug trade that Renetta and her sons believe directly led to his killing. And, according to them, it was Larry Key’s own family members who lured him into the lucrative criminal enterprise.

“He saw the glitz and the glamour of other members of his family ... nice homes, nice cars, trips, it drew him like a moth to a flame,” said Renetta, who alleges that other members of Larry Key’s family were involved in the illegal activity then rampant in the state.

When Larry Key was arrested Nov. 13, 1971, for allegedly dealing drugs out of the Cave City Truck Stop, he quickly agreed to offer a proffer – in effect agreeing to share some information, assumedly in exchange for some leniency in his sentencing.

While no record apparently exists of what was detailed in the proffer, “My personal opinion is that he told everything he knew about the drug trade,” Renetta said.

“I believe in my father’s proffer that he was going to ... identify a Kentucky state trooper who he knew, and we now know for a fact, was dealing narcotics himself,” Todd Key said. The family believes this former state trooper was working for Larry Key’s family members involved in illegal activity. Barrett was alleged to also have knowledge of the former state trooper’s criminal activity – a purported motive for his killing Dec. 19, 1971.

“We do not condone (Larry Key’s drug) activity; never have, never will,” Renetta said. “However, what he did was not so egregious that it deserved a contemplated, planned ... murder.”

Renetta and her sons believe that those involved in the drug trade, from Larry Key’s family members to corrupt members of law enforcement, were looking to take care of two problems with Larry Key’s death: They would not have to worry about his potential testimony against them, and they could pin the death of Barrett on Larry Key.

After a Jan. 24, 1971, blackmail attempt – when a drugged Larry Key at a local hotel room was being goaded into confessing to killing Barrett a month earlier – failed, Renetta and her sons believe the killing of their husband and father included a plan to plant a shotgun in Larry Key’s car.

“They were going to link him to the Barrett murder by planting that shotgun,” Todd Key said, but the plan was foiled by the presence of four witnesses who were dealing with a broken-down vehicle on the Interstate 65 Glendale exit ramp where Larry Key was shot and killed.

Renetta recalled that prior to his death, her husband constantly assured her that she and their sons were safe. But there were also ominous signs that Larry Key knew too much.

Renetta said that one night, Larry Key’s parents relayed a warning to him from another family member: “If you don’t keep your mouth shut, they are going to find you in a river with lead boots,” Renetta recalled. “And his mother had tears streaming down her face as she told him.”

Next Sunday: The investigators.

Justice continues to be elusive in the cases of two area men killed in the 1970s, heightening frustrations that have lingered for nearly a hal…