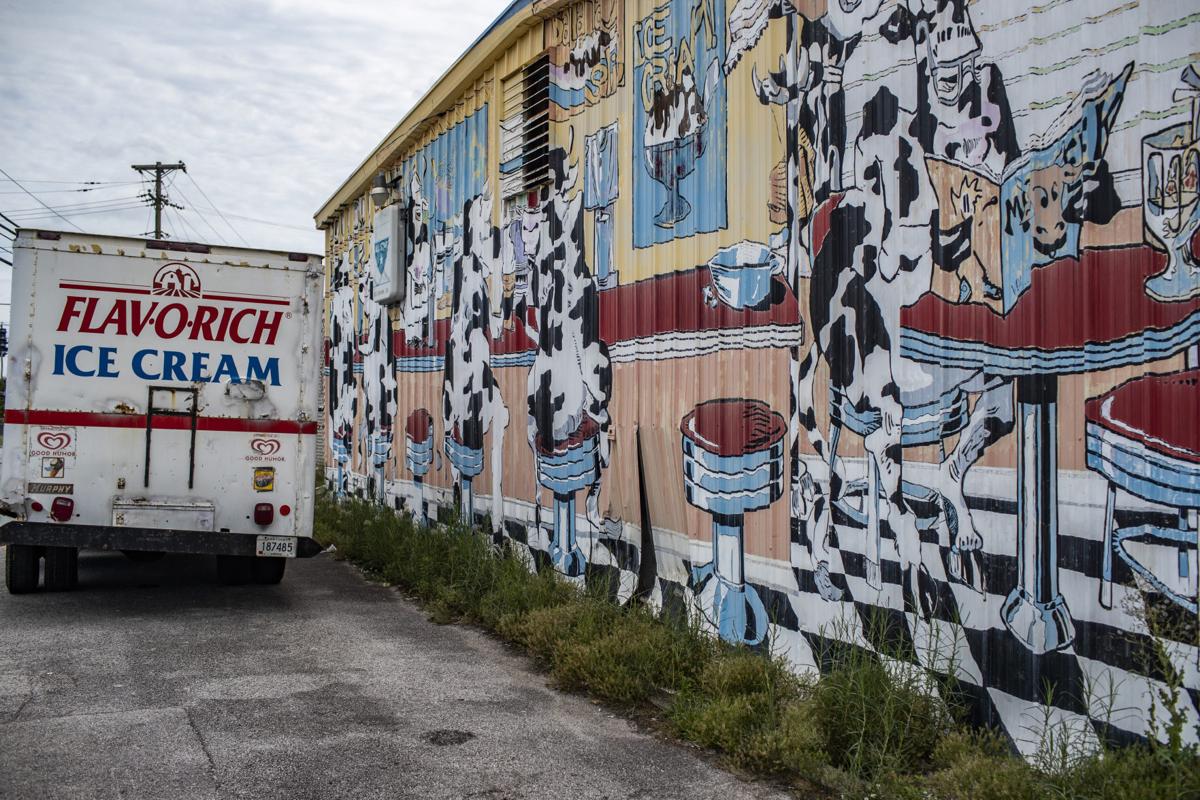 A mural painted by Andee Rudloff on the side of the former Brown’s Ice Cream Co. building is visible Thursday, July 18, 2019, on Boatlanding Road. For additional photos, go to bgdailynews.com. 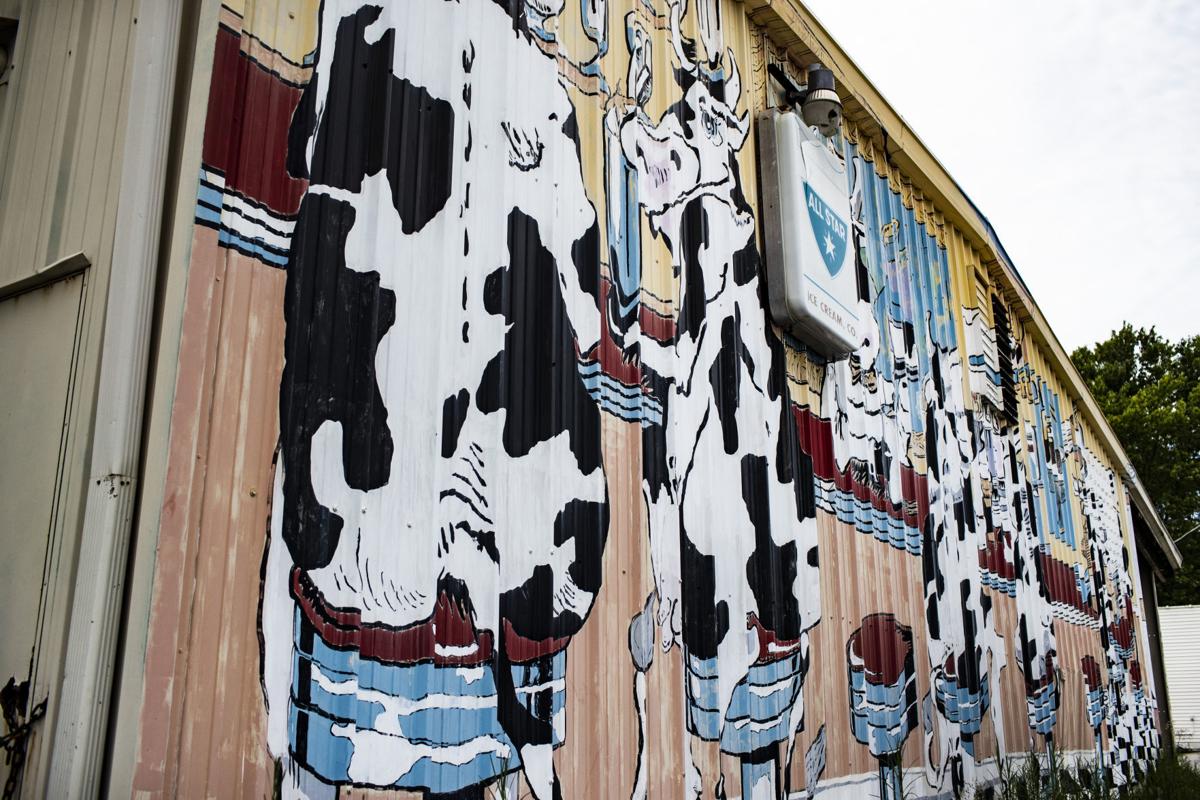 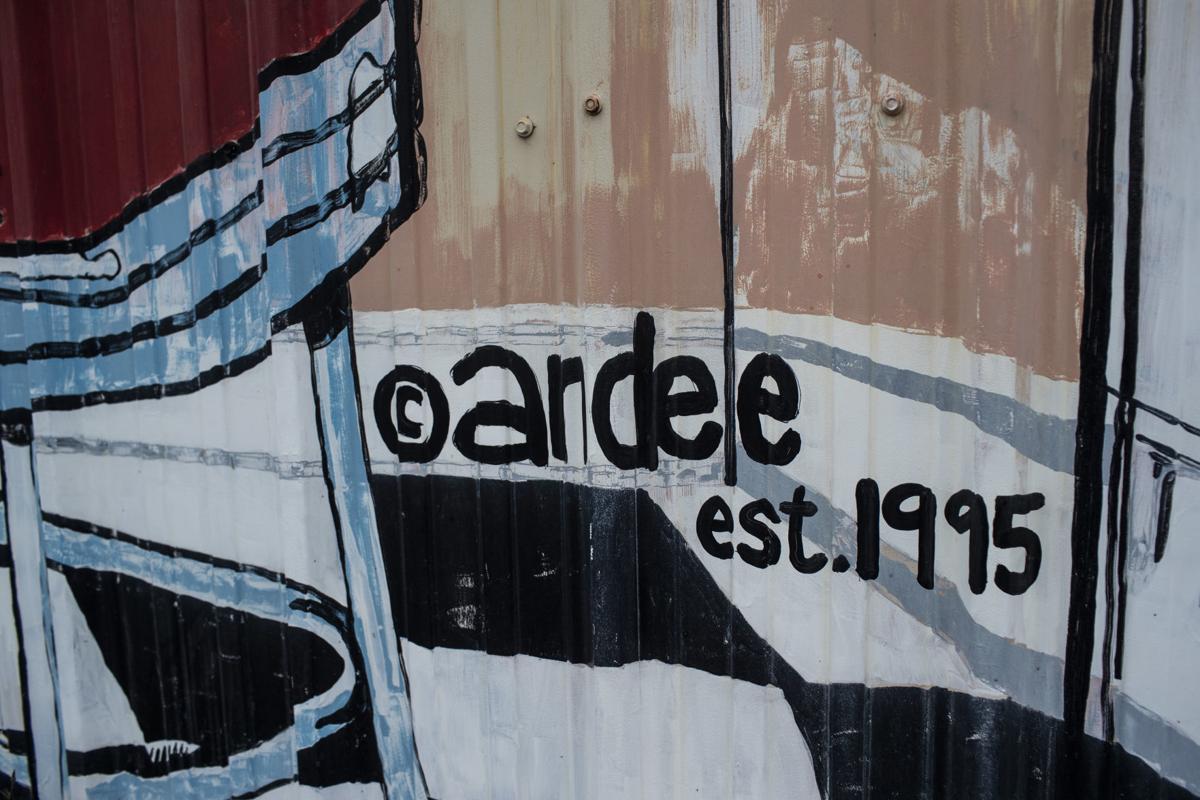 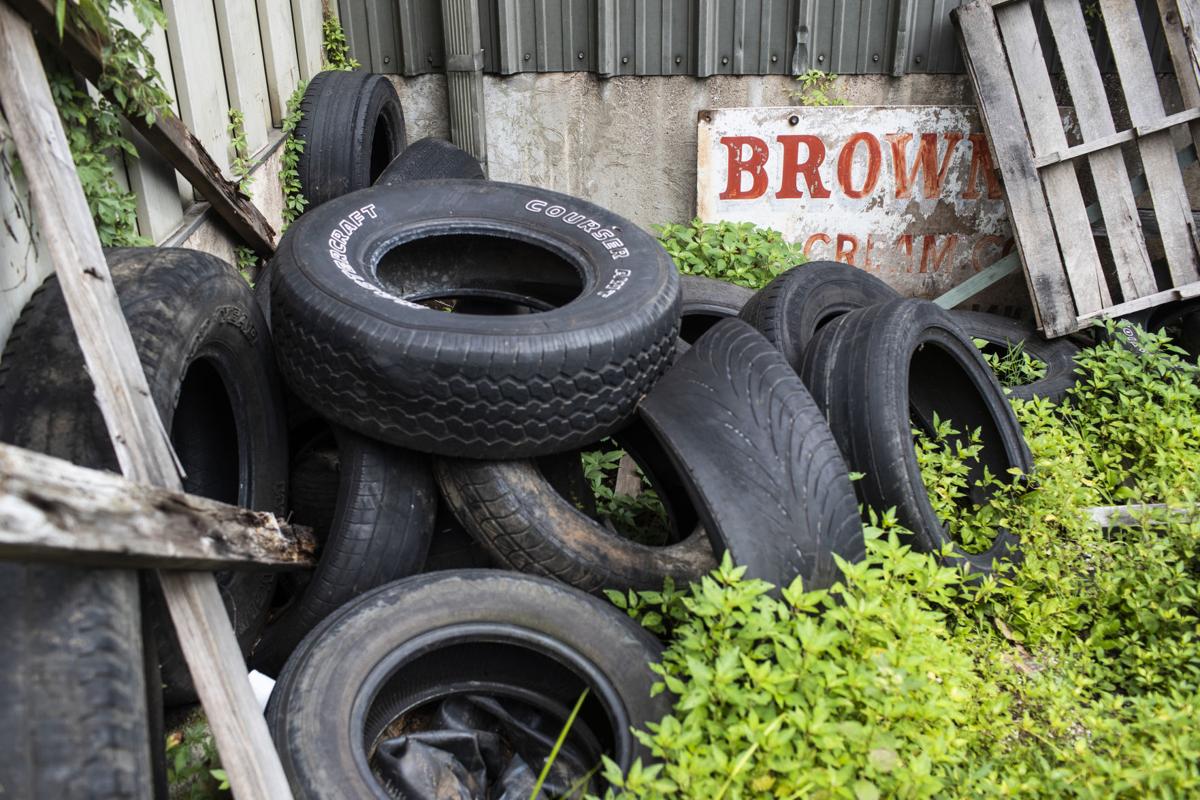 A mural painted by Andee Rudloff on the side of the former Brown’s Ice Cream Co. building is visible Thursday, July 18, 2019, on Boatlanding Road. For additional photos, go to bgdailynews.com.

Rumors began circulating on Facebook this week about the potential sale of the former Brown’s Ice Cream Co. building at 701 Boatlanding Road.

The front of the building features a mural painted by local artist Andee Rudloff, which led to concerns about the 24-year-old work being in jeopardy.

Rudloff posted a message to her personal Facebook page Wednesday, penning an informative bulletin that had garnered 46 comments, 195 shares and 227 reactions as of Friday afternoon. In the post, Rudloff wrote that the cow mural “is an important part of our city’s history” and shouldn’t be destroyed.

“I was really sad to find out the former browns ice cream warehouse at 701 Boatlanding Road in Bowling Green Kentucky had been sold and would either be razed or painted … ,” Rudloff wrote in her Facebook post.

Rudloff said she was commissioned in 1995 by the late David Garvin and Operation PRIDE to paint Brown’s Ice Cream since “they thought a mural could be a game changer” and would lead to “beautification” of the area, which is near the corner of Double Springs Road and Highway 185.

Rudloff painted the mural on the corrugated metal panels that comprise the building’s facade.

“We actually involved a lot of community members, a lot of community input and not only did that mural reflect the fact that it was used as a dairy freezer, but it also reflected the community,” Rudloff said about the mural in an interview with the Daily News. “Right there at that part of Bowling Green is a real interesting divide, or it was at one point, of international people and people who have brown skin and then people from the rural, white community and so that mural was really a time for us to come together and also a time to celebrate community. We had a lot of different ages, a lot of different people participate in that.”

A friend of Rudloff’s told her the building might be sold and that it was his understanding a contract had already been signed to paint over the mural.

While attempting to contact the building’s owner, Rudloff was told the family that owns Kinnarney’s Drive In Liquors – an adjacent business at 711 Boatlanding Road – was potentially interested in purchasing the property.

According to Warren County’s Property Valuation Administrator office, the former Brown’s Ice Cream Co. building at 701 Boatlanding Road is owned by Jerry W. Conder. Kentucky Secretary of State Online Services data states Brown’s Ice Cream Co. is active, but in bad standing. Conder has not submitted an annual report since July 11, 2018, according to the database.

Manan Patel and Ashok Patel told the Daily News on Thursday they have entered into a contract with Conder to purchase the warehouse at 701 Boatlanding Road, but the deal won’t be finished for at least two weeks.

The pair, who will be co-owners of the building if an agreement to purchase it goes through, said they aren’t planning on tearing down the mural – in fact, they are open to preserving the mural for a new facility.

“We’re open to moving the (mural) to the side of the building,” Ashok Patel said. “We’d be more than happy to relocate it. We’re not sure how the building might look, but we’ll try to see if we can. Our first option is to keep it, second option is to give it to someone else. But we’re open to any other ideas, too.”

Once their purchase is complete, Manan Patel and Ashok Patel said they will listen to community suggestions about the mural’s future.

Rudloff started the “SaveTheCowMural” hashtag on social media in hopes of spreading the word about the mural, which Rudloff said is an important part of the city and had “become a real source of pride” for residents old and new.

“I was just really sad,” Rudloff said. “More than anything, it’d become bigger than just me painting a mural and I just wanted the people who did purchase the building to know a little bit more about what it is and why it happened.”

Rudloff said if new ownership decides a cow mural “doesn’t jive” with their business venture, many different community members have offered to help take the mural down so it can be transported to a “new home” elsewhere.

The mural has become a local favorite for those heading out to Jackson’s Orchard, but it could soon be another attraction for patrons to enjoy at Chaney’s Dairy Barn – Rudloff said she’s heard from several local entities wanting to repurpose the mural on their property, including Chaney’s.

Carl Chaney, co-owner of Chaney’s Dairy Barn, said he’s “got a couple walls” the mural could go on if it was the right size and if new ownership was willing to part ways with the metal panels. Chaney said he hasn’t had a chance to measure anything yet, but he’d “love to have” the mural if at all possible.

“It’s what we’re all about – cows and ice cream – I mean, that’s us to a tee,” Chaney said. “I would love to check it out and see if it would be something that maybe we could use here and incorporate it in some way or another, especially if they’re going to do away with it – I mean that’s been such a landmark for so long, it would be disappointing to see it disappear.”

It now appears the famed mural will be preserved in some form or another, which Rudloff said was “really great news to hear” since many people in Bowling Green would’ve been “crushed” to see it fall by the wayside.

Kentucky Educational Television filmed Rudloff while she was painting the mural, and the video is still utilized “to this day” as part of a visual arts toolkit used to teach people about different art forms. The project’s longevity in so many forms has amazed Rudloff, and she hopes it will continue to endure.

“It’s me 24 years ago when I was like, you know, coming right out of college,” a chuckling Rudloff said about the video. “It was my first big project, so it’s pretty cool that it’s had that life span. I’m just going to tell you, it just wows me that it’s been around that long, but it also goes to show you it’s bigger than me. It’s really about the community, you know? I can’t wait to follow up with the family and hopefully come up with a good solution.”