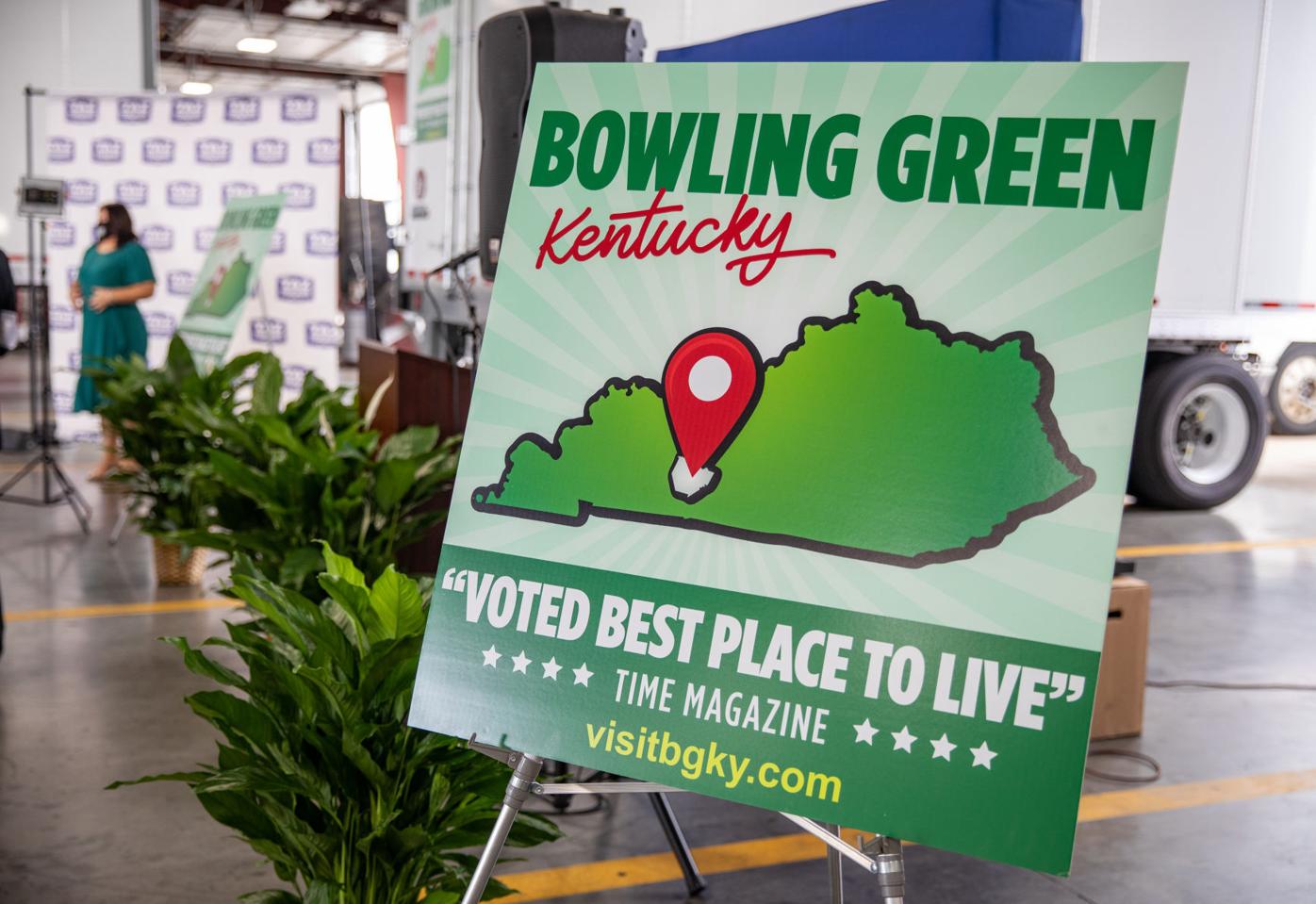 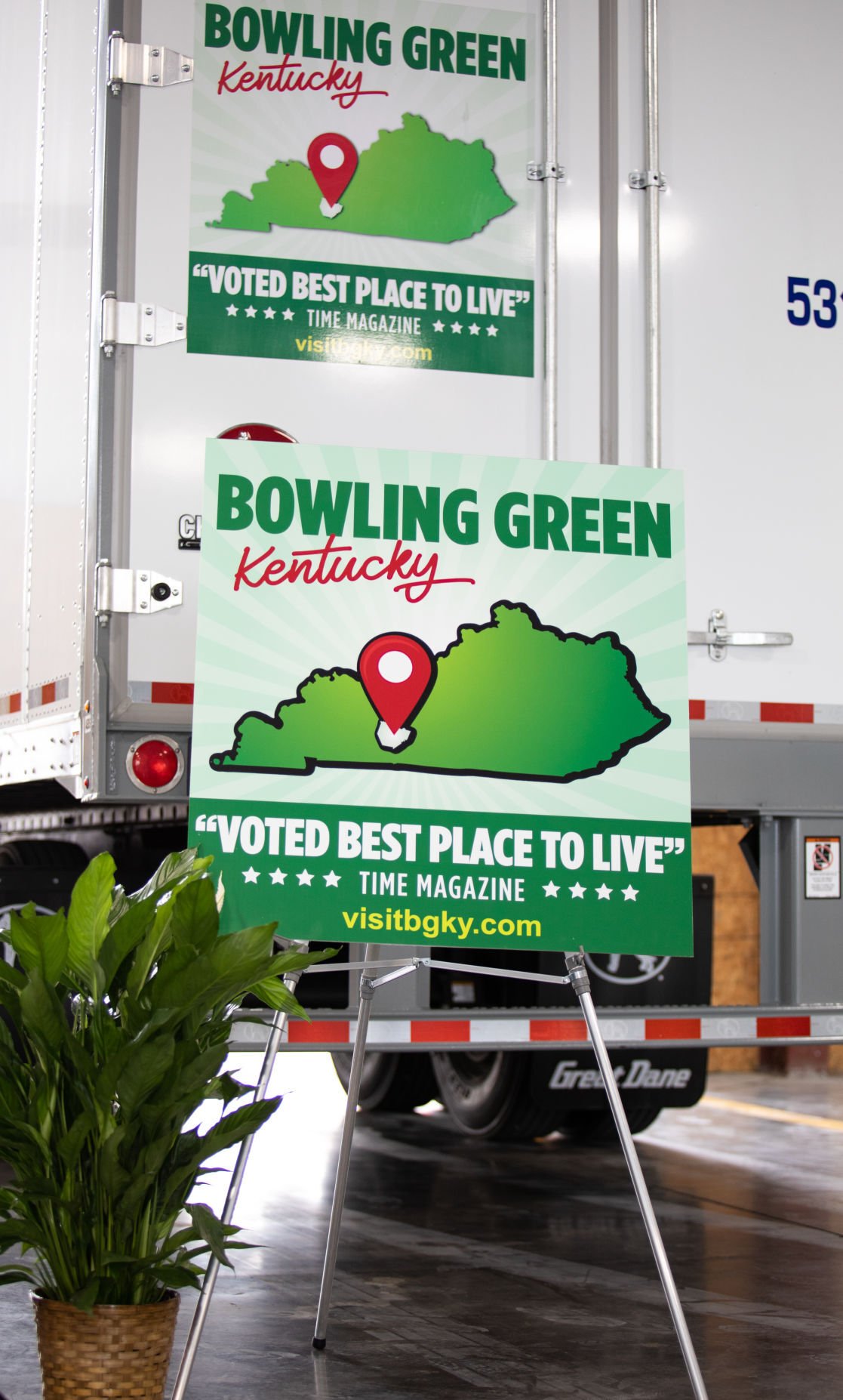 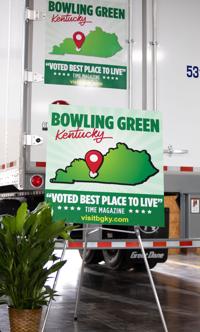 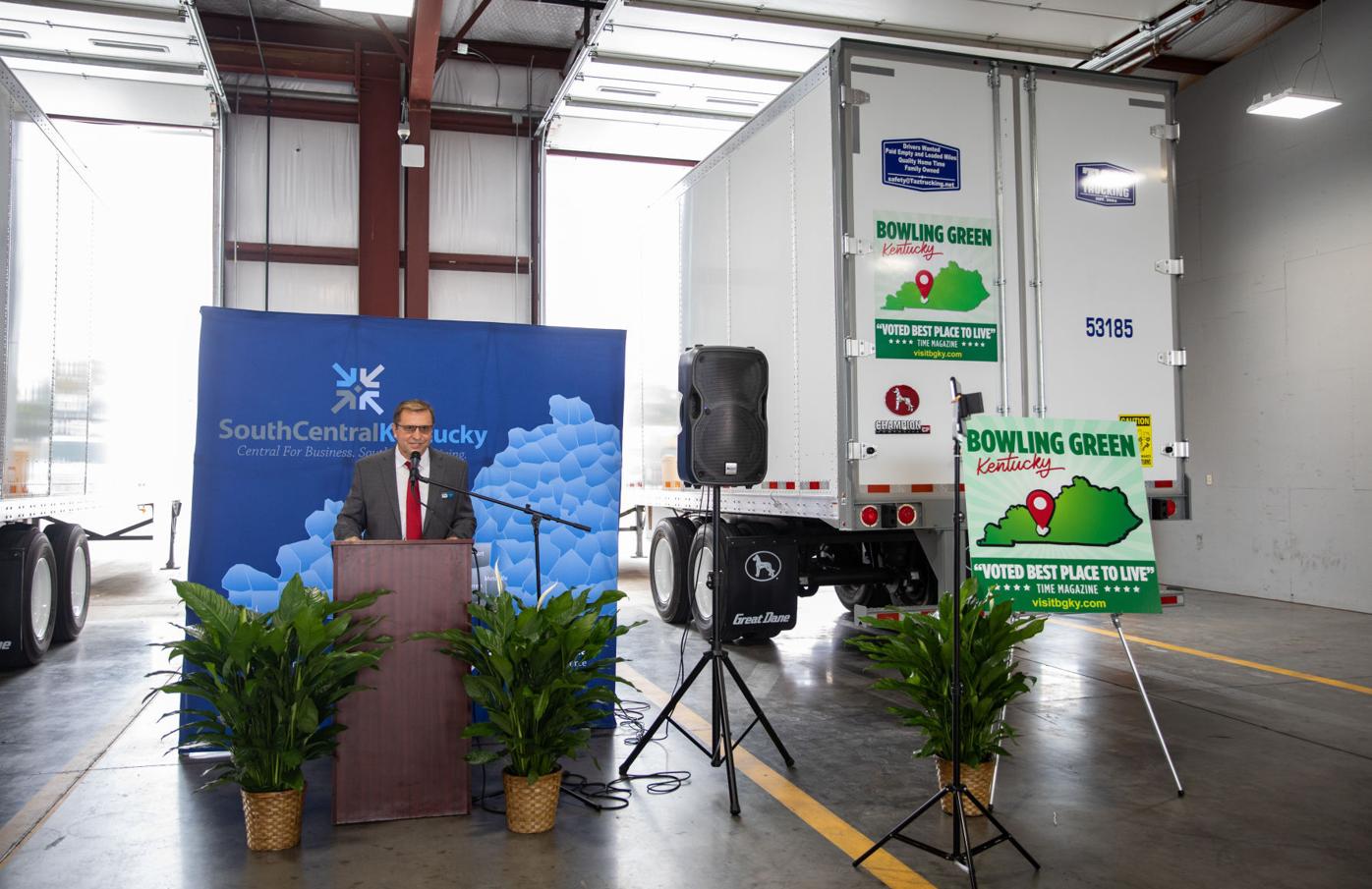 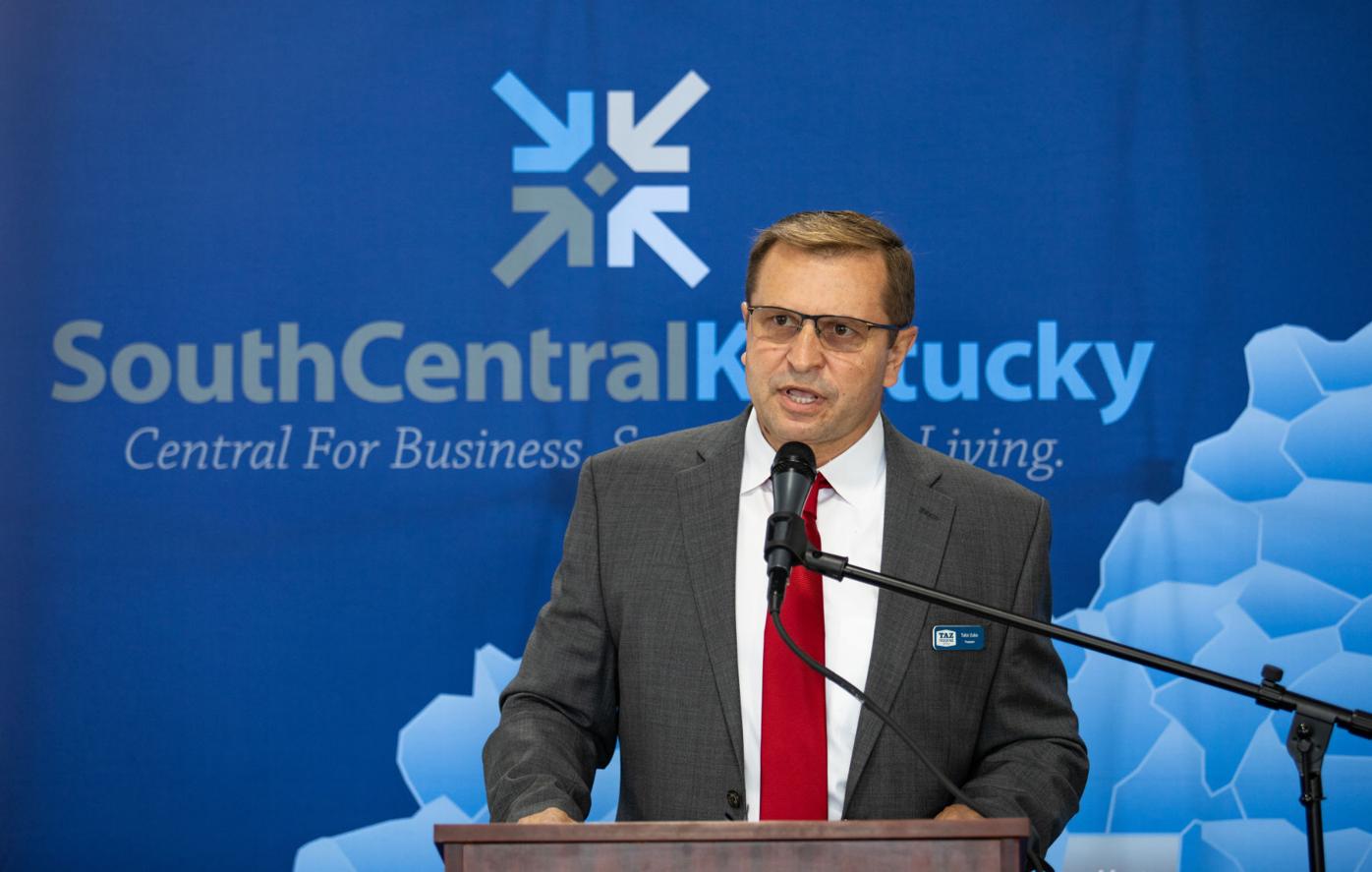 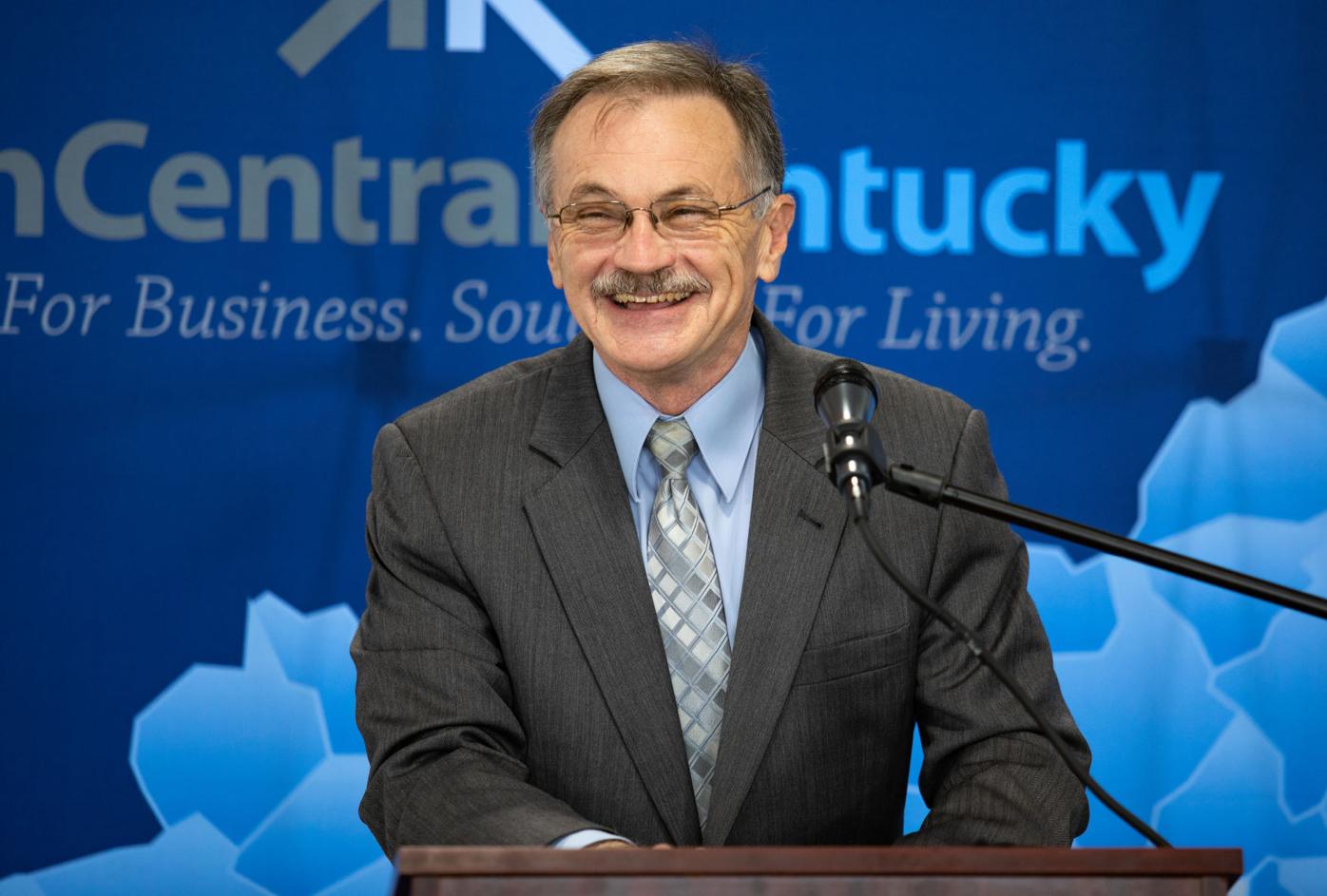 Trucking companies, which have played a big part in Bowling Green’s economic growth in recent years, will now be used to promote a city that has picked up speed like a downhill-rolling 18-wheeler.

Hundreds of tractor-trailers that originate in Bowling Green are now sporting signs on their rear doors that promote the city with the message: “Bowling Green, Kentucky – Voted Best Place to Live by Time Magazine.”

That reference to Time magazine’s 2019 ranking of the best places to live in all 50 U.S. states is part of a “Bowling Green Best Place to Live campaign” that originated with former Bowling Green Mayor Johnny Webb. The campaign is being funded for now by the Bowling Green Convention & Visitors Bureau and Bowling Green Area Chamber of Commerce.

“I’ve been working on this for a couple of years,” said Webb, who served as Bowling Green’s mayor from 1992 through 1995. “Through knowing Jake Simic (owner of the La Gala event venue), I started meeting a lot of Bosnian people and learned that a lot of them have gravitated to the trucking business.

“These trucks are traveling all over the United States, so I started thinking: Why not put something on those trucks to promote Bowling Green?”

That seed of an idea quickly sprouted as trucking company owners like Tahir Zukic of TAZ Trucking jumped on board.

A native of Bosnia who came to Bowling Green in 2000, Zukic has grown his company from a single Volvo truck to an operation that now has 120 tractors and 180 trailers at its 53-acre headquarters off Nashville Road.

Friday’s announcement of the “Best Place to Live” campaign was held at TAZ Trucking, where Zukic said he and his fellow trucking company owners are happy to be a part of the promotion.

“Me and Johnny talked about what was the best idea for giving back to the community,” Zukic said. “A large number of Bosnian immigrants have gone into the trucking business. Through hard work, we have found success. Bowling Green has been good to us, and I hope we’ve been good for Bowling Green.”

Zukic, who read from a list of 25 transportation companies that he estimated had more than 1,500 trucks, said his fellow business owners were happy to turn those vehicles into rolling billboards.

“People were excited to show that they appreciate Bowling Green,” Zukic said.

With trucking companies on board, the convention and visitors bureau invested more than $6,700 to pay for the first 500 “Best Place to Live” signs produced by Bowling Green’s Signature Signs & Ad Specialties.

Webb, who has continued his involvement post-retirement with Warren County’s Operation PRIDE organization that aims to beautify the area, said the chamber of commerce invested $4,350 to purchase 300 more of the signs.

Webb said more signs may be purchased as needed. The former mayor said the weather-resistant signs should last “four or five years” before needing to be replaced.

Sherry Murphy, executive director of the convention and visitors bureau, sees the traveling signs that include the CVB’s website as a good investment.

“We are excited for this campaign and appreciate the local companies who are helping spread the word about how great our city is,” Murphy said in a news release. “Bowling Green is an amazing destination, and our hospitality industry thrives on welcoming visitors each year. We hope this campaign drives visitor traffic to experience Bowling Green.”

Current Bowling Green Mayor Bruce Wilkerson hopes the signs can help continue the momentum for Bowling Green, which was recently included in the Livability.com website’s ranking of the top 100 places to live in the U.S.

“Bowling Green has been growing by about 1,000 residents per year over the last 15 years,” Wilkerson said. “Advertising our community in this way is a wonderful idea. This community has received recognition after recognition. That’s something we should be proud of.”

The “Best Place to Live” signs were on display Friday on many of TAZ Trucking’s trailers, and current chamber of commerce board Chairman Eric Walker said he’s anxious to see them on the road.

“It’s going to be fun when you’re in another part of the country and you see one of these signs,” he said.