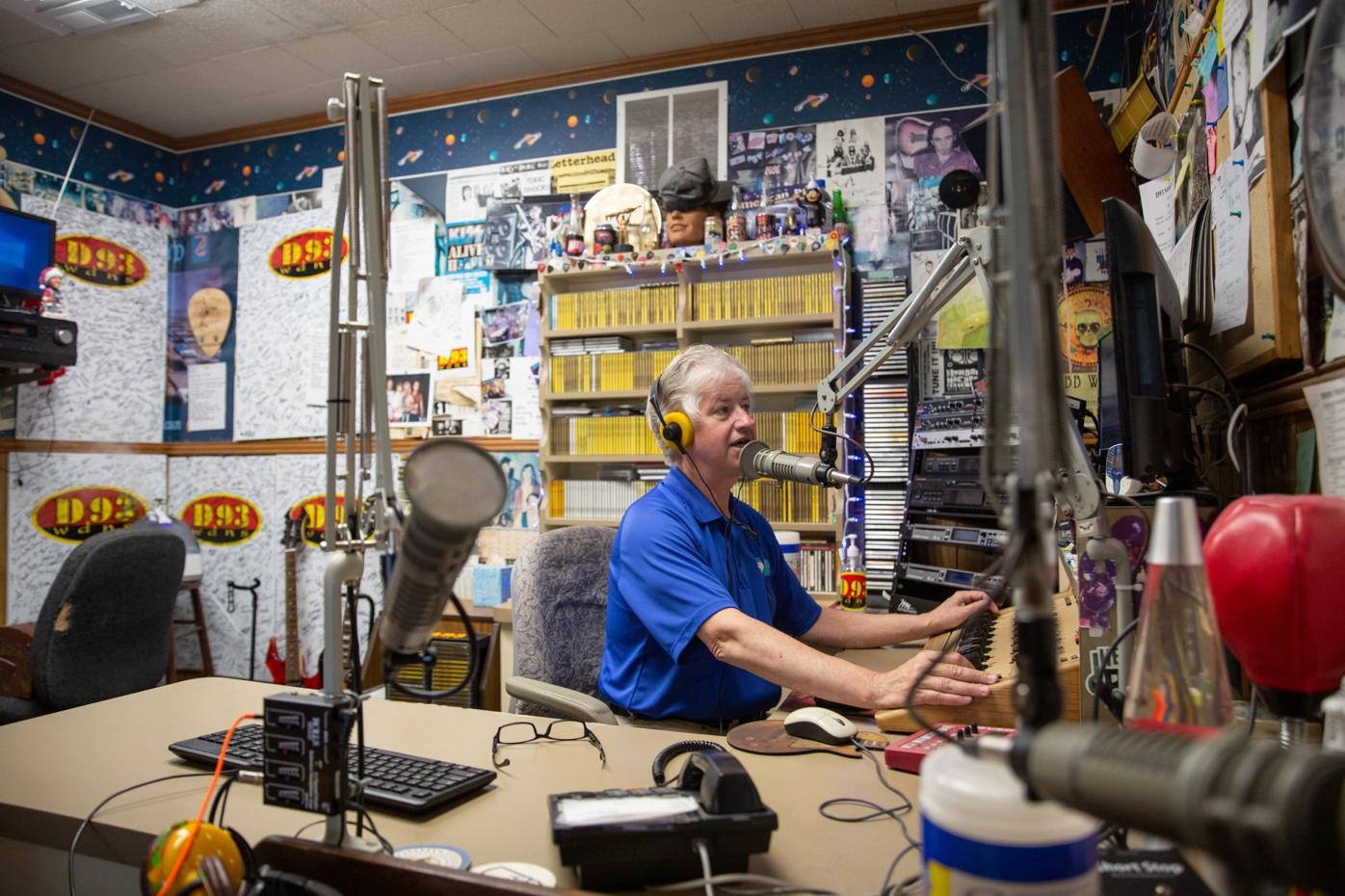 Bryan Locke, on-air personality and program director for D93 WDNS-FM, runs his program at the station Friday, May 15, 2020. WDNS is one of 10 stations nationally to be awarded the 2020 National Association of Broadcasters Crystal Radio Award for its year-round commitment to community service. (Grace Ramey/photo@bgdailynews.com) 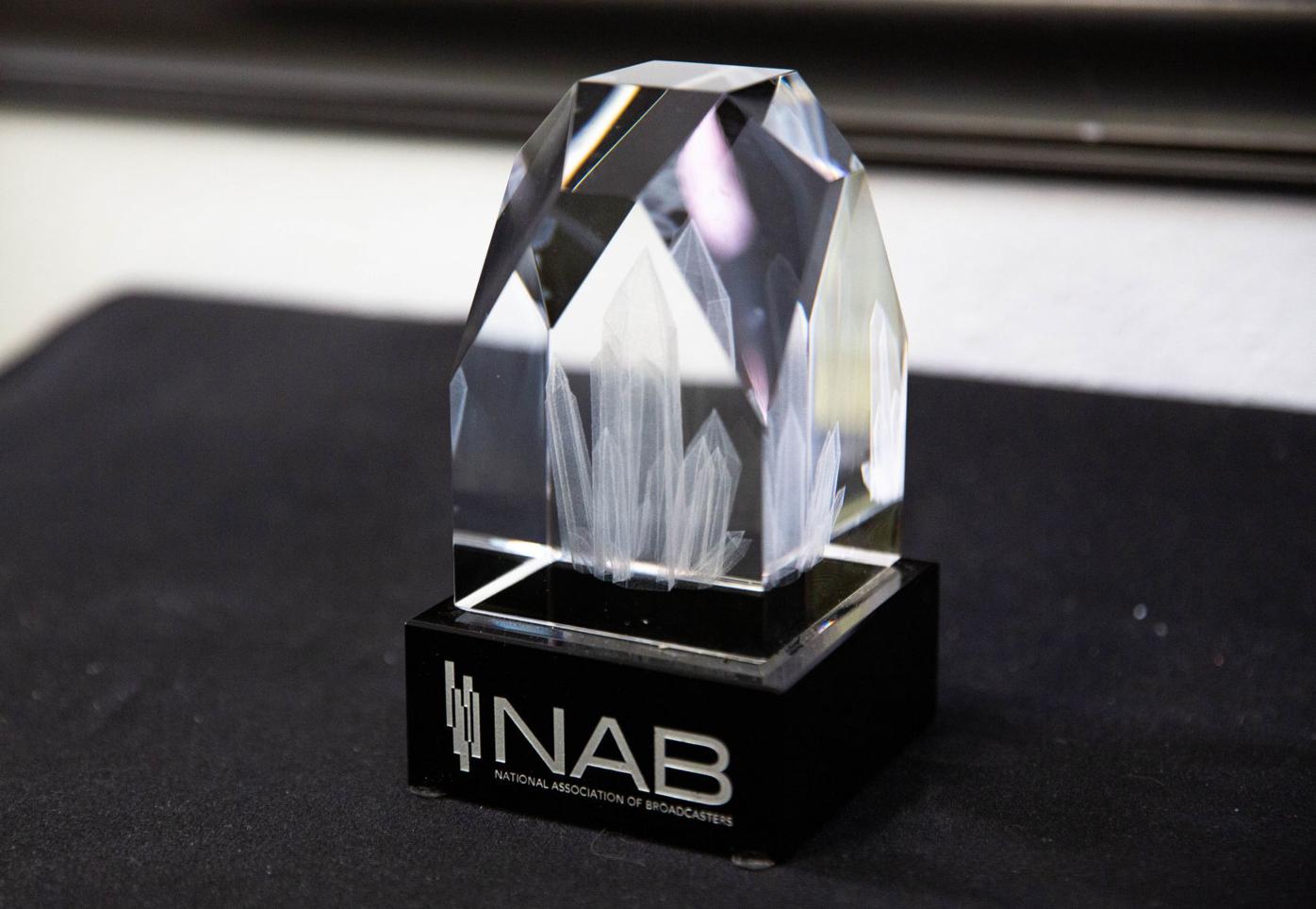 D93 WDNS-FM’s 2017 National Association of Broadcasters Crystal Award for community service is displayed on a table at the radio station Friday, May 15, 2020.

Bryan Locke, on-air personality and program director for D93 WDNS-FM, runs his program at the station Friday, May 15, 2020. WDNS is one of 10 stations nationally to be awarded the 2020 National Association of Broadcasters Crystal Radio Award for its year-round commitment to community service. (Grace Ramey/photo@bgdailynews.com)

D93 WDNS-FM’s 2017 National Association of Broadcasters Crystal Award for community service is displayed on a table at the radio station Friday, May 15, 2020.

From spearheading the annual Stuff the Bus school supplies drive to helping such fundraisers as the American Cancer Society’s Relay for Life, Bowling Green’s D93 WDNS-FM radio station has a hand in dozens of community events.

Now that community involvement has led to national recognition.

For the second time in three years, WDNS has been honored for its commitment to community service by receiving a 2020 Crystal Radio Award from the National Association of Broadcasters.

WDNS was announced last week as one of 10 winners of the award nationally, with many of the others coming from such larger markets as Cincinnati, Seattle and Tampa Bay.

Part of the Daily News Media Group, WDNS has been among the 50 finalists for the award four times, winning in 2017 and again this year.

“It’s nice to be recognized for trying to better the community,” WDNS General Manager Alan Cooper said. “And it’s phenomenal to do it twice. Our license from the (Federal Communications Commission) is all about serving the community. We’re lucky enough to have a staff that takes that to heart.”

WDNS morning show host Tony Rose, who helped build the Stuff the Bus event into a nonprofit organization that now provides school supplies and scholarships to school-age children throughout southcentral Kentucky, said putting together the 15-page application for the award made him realize how much D93 and its employees do to benefit the community.

“You have to document how much time you’ve donated and what events you’re part of,” Rose said. “We were involved in more than 50 local events in 2019, and we provided close to a quarter-million dollars in public service announcements.”

Rose promotes many fundraising events on his morning show, and he and other D93 staffers participate in many of those events. The station plays a big role in such fundraisers as Relay for Life, the Walk to End Alzheimer’s, the Child Advocacy Center’s Great Teddy Bear Run and Rockin’ Trick or Treat at Bowling Green Ballpark.

Bowling Green attorney Cyndi Crocker, whose Crocker Law Firm sponsors the Rockin’ Trick or Treat event, has seen firsthand the impact that D93 can have in making such events successful.

“I think D93 is a great asset to this community,” Crocker said. “They were a great partner for Rockin’ Trick or Treat, which brought so much joy to many children.”

That’s exactly what the NAB is looking for in its Crystal Radio Award winners.

According to a news release announcing the winners, the Crystal Radio Award recognizes radio stations for their outstanding year-round commitment to community service. The winners were chosen by a panel of judges representing broadcasting, community service organizations and public relations firms.

“To make great local radio, we have to be able to use our medium to help the community be better,” he said. “If we do, it strengthens everything.”