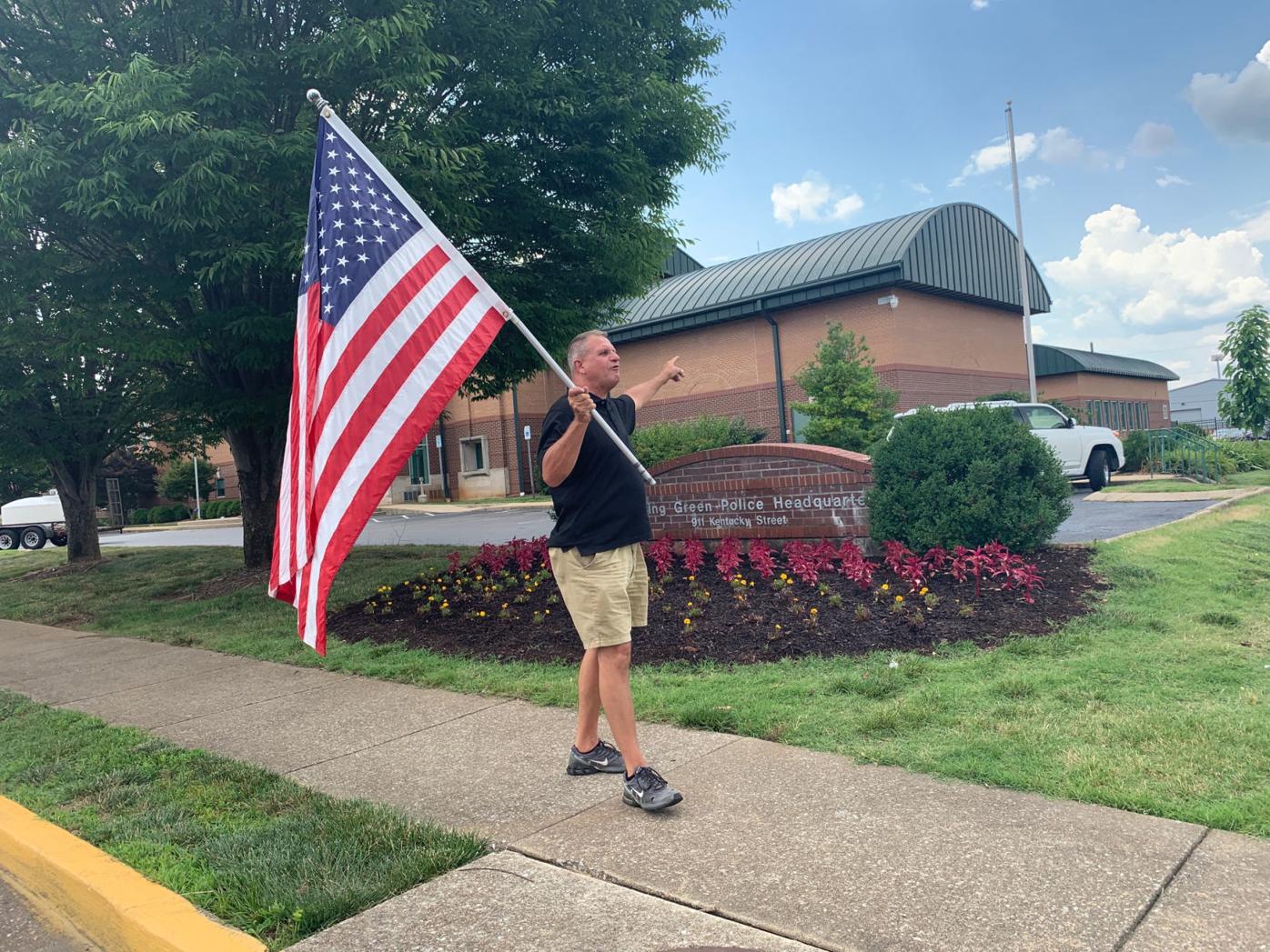 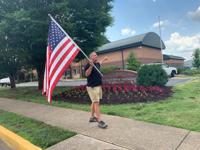 Daniel Alexander, Warren County constable for the Second District and a 23-year law enforcement veteran, waves an American flag June 19 outside the Bowling Green Police Department after Bowling Green Mayor Bruce Wilkerson had flags at city-owned locations taken down due to information about “outside groups” passing through town that might pose a threat. 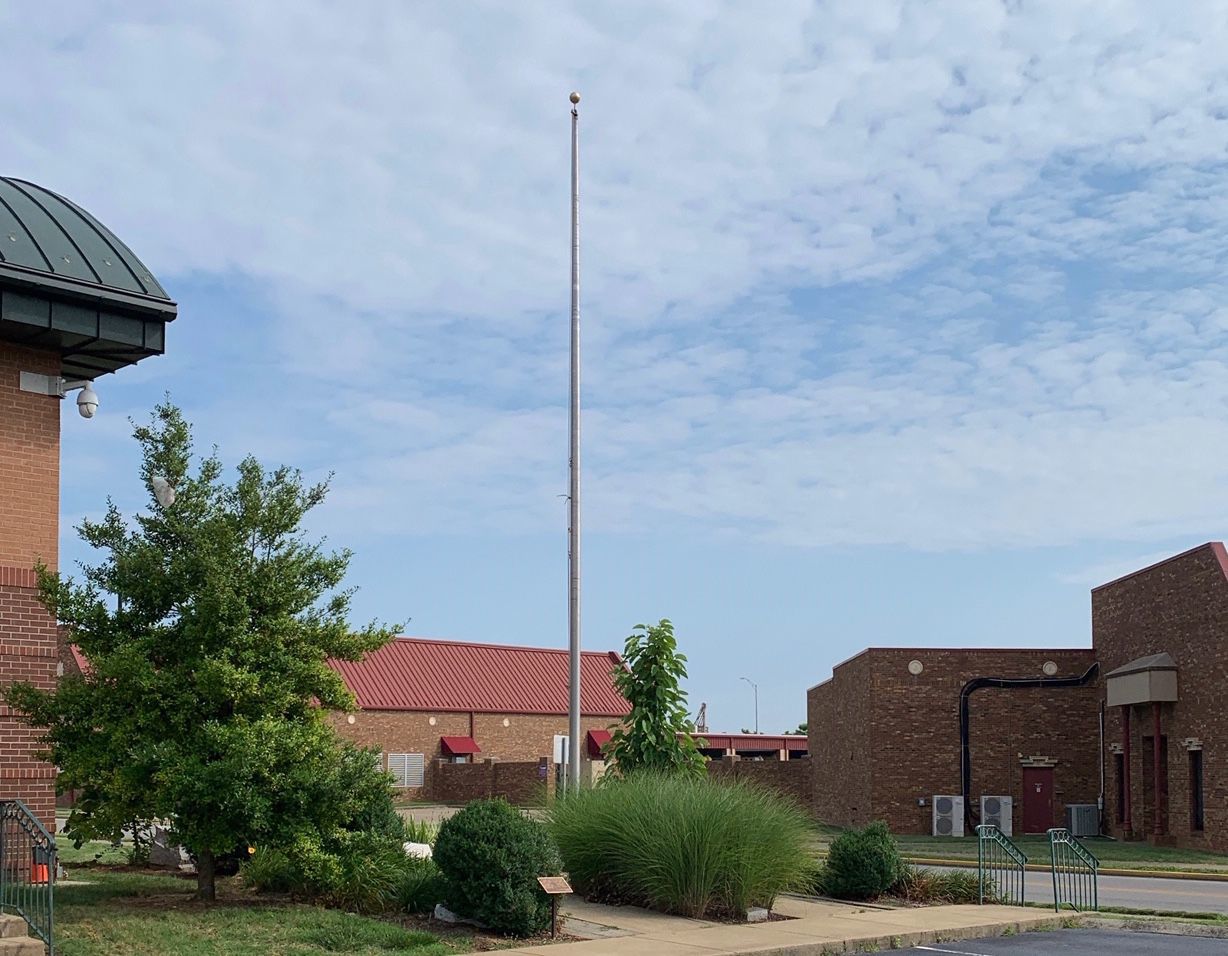 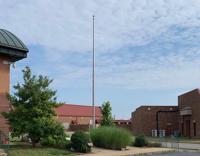 The flag pole outside the Bowling Green Police Department was without a flag Friday morning after Mayor Bruce Wilkerson ordered flags at city buildings be taken down for unspecified reasons.

Daniel Alexander, Warren County constable for the Second District and a 23-year law enforcement veteran, waves an American flag June 19 outside the Bowling Green Police Department after Bowling Green Mayor Bruce Wilkerson had flags at city-owned locations taken down due to information about “outside groups” passing through town that might pose a threat.

The flag pole outside the Bowling Green Police Department was without a flag Friday morning after Mayor Bruce Wilkerson ordered flags at city buildings be taken down for unspecified reasons.

American flags were ordered taken down Friday from poles on city-owned property by Bowling Green Mayor Bruce Wilkerson, who initially declined to reveal the reason for the decision but later released a statement indicating it was a precaution due to "outside groups" potentially coming to the city.

"Regarding recent information received about outside groups coming through our area today, it seemed prudent to protect our American flags by placing them in safekeeping for a brief period of time," Wilkerson said in a statement posted to social media just before 2 p.m. "Our citizens are rightly concerned about our nation’s symbol. They will be returned tomorrow."

The statement did not indicate what groups Wilkerson was referring to.

Wilkerson made no mention of any outside groups or concerns about the safety of the flags earlier Friday.

"I recommended them being taken down," Wilkerson told the Daily News on Friday morning, without providing a reason. "I don't want to comment on that at the present time."

However, a Bowling Green man named Eric Phelps was seen late Friday morning raising a flag on the pole in front of City Hall, apparently on his own initiative. Phelps said he had other flags he planned to install on city flagpoles.

"I spoke with the mayor and asked why the flag was down," Phelps told the Daily News. "He told me that he could tell me, but I would have to keep our conversation confidential. I refused. ...

"That flag has been bloodied, torn and soiled on countless battlefields and has always been picked up. There is never an excuse for it coming down."

Across the street from City Hall, flags were still flying Friday at the Warren County Courthouse.

American flags were back flying above Bowling Green city facilities Saturday, just hours after their removal on the orders of Bowling Green Ma…

An unbelievable bad decision based on your opinion of something that has not occurred. The American Flag, is the Battle Flag of the United States Armed Services and of all Americans.

You have personally insulted all Armed Service Members and Citizens of Bowling Green and Warren Co and Kentucky.

An have personally embarrassed me, as a former resident of the Bowling Green Area and insulted me as an Officer of the United States Marine Corps and the U. S. Army Reserve.

I agree, taking the flag down is the wrong decision and quite cowardly.

Now, concerning the election. Unless there is a REAL conservative that is going to run against this mayor I suggest nobody burn their bridges. As weak as he is he may be the lesser of 2 evils. So who is running against him that you can trust? Anyone?

This explanation is lacking. Taking down a flag to protect the physical piece of cloth that is the flag makes no sense. Another flag cost nothing. What is precious and needs to be protected is the courage required to fly that flag because you stand for what it represents against all enemies foreign and domestic. The explanation does not make sense.

From Smithsonian Magazine: “On a rainy September 13, 1814, British warships sent a downpour of shells and rockets onto Fort McHenry in Baltimore Harbor, relentlessly pounding the American fort for 25 hours. ..."It seemed as though mother earth had opened and was vomiting shot and shell in a sheet of fire and brimstone," [Francis Scott] Key wrote later. But when darkness arrived, Key saw only red erupting in the night sky. Given the scale of the attack, he was certain the British would win. The hours passed slowly, but in the clearing smoke of "the dawn's early light" on September 14, he saw the American flag—not the British Union Jack—flying over the fort, announcing an American victory.” This is how our national anthem came to be; in honor and respect of so great a symbol of our freedom. ...If our great flag could withstand rain, British warships, shells and rockets for 25 hours with both God and men making sure she still waved, I do believe she will still wave today in spite of whatever the domestic terrorists plan to do to her especially, Mayor, if you let us defend her. Do not hide her away; she must always wave.

Shame on your Bruce Milk-her-son, I'll be damn sure to vote against you

Wow, interesting that liberals are suddenly upset about the flag. Let me check.... Oh, Wilkerson is a retired cop and a conservative! That explains it.

If anyone damages city property at the BG Police station. It should be a very short trip over to the jail. Leave the flag alone and let it fly. Then let the police do their your job if someone damages property they dont own.

Hopefully city voters will remove him when the election comes around

It appears that he is reacting to threats. Our country has been this through this before and cowering down is not our tradition. He could have police or many concerned volunteers guarding them.

Mayor Wilkerson I’m sure has a very good reason for issuing the order. The people who hired you, the citizens of BG, want to know why. Unless for a public safety reason, answering the question shouldn’t be optional.

I don't believe I've ever heard of the City of Bowling Green removing our flag due to being too afraid to fly our flag because a group or groups would be coming through Bowling Green. This flag represents America, which our forefathers and ancestors fought and died for, to keep it freely waving..not to be removed in fear. As our duly elected Mayor, you have the responsibility to respond to the question as to why you directed to have our flag removed! We're waiting, Mr. Mayor!