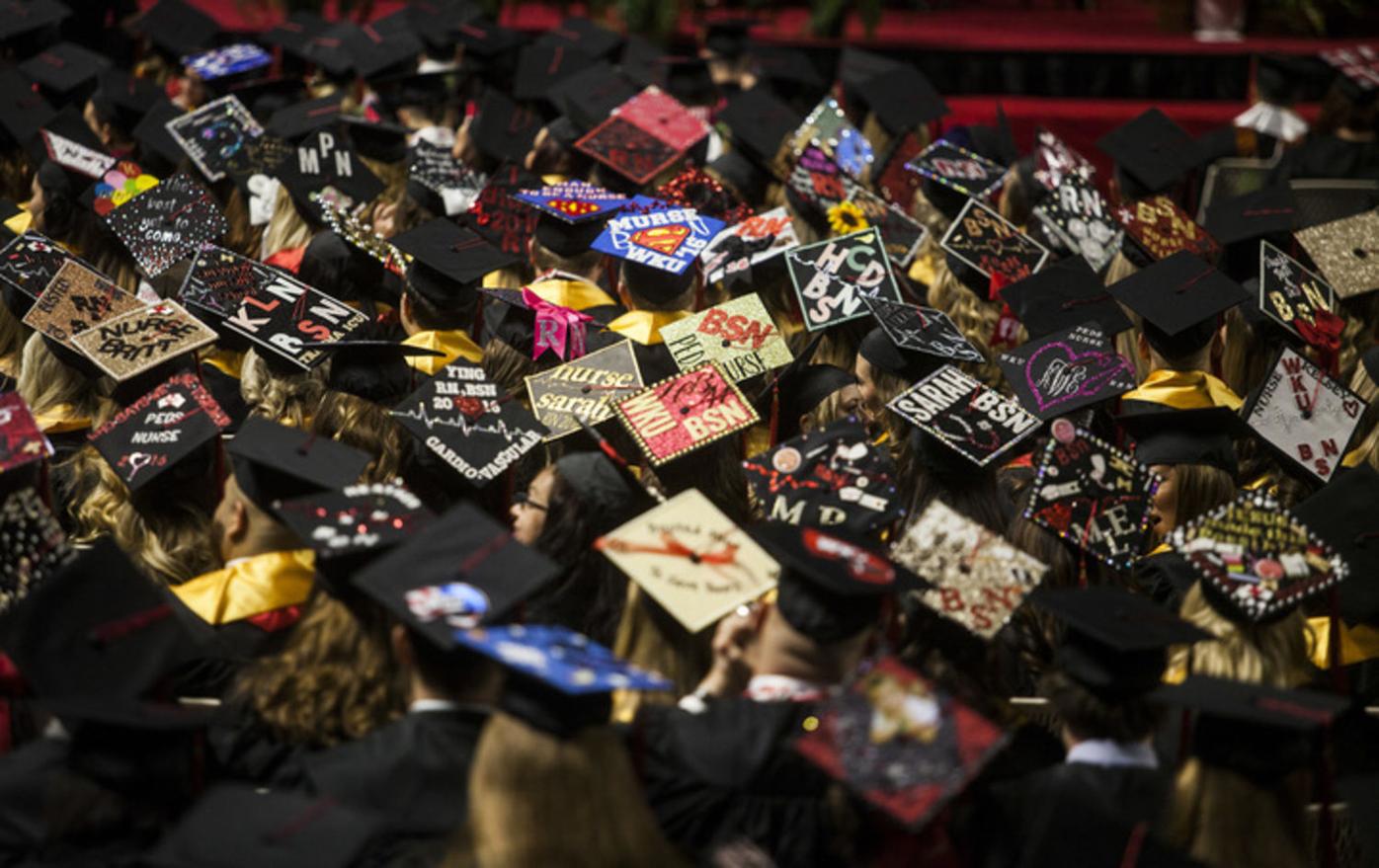 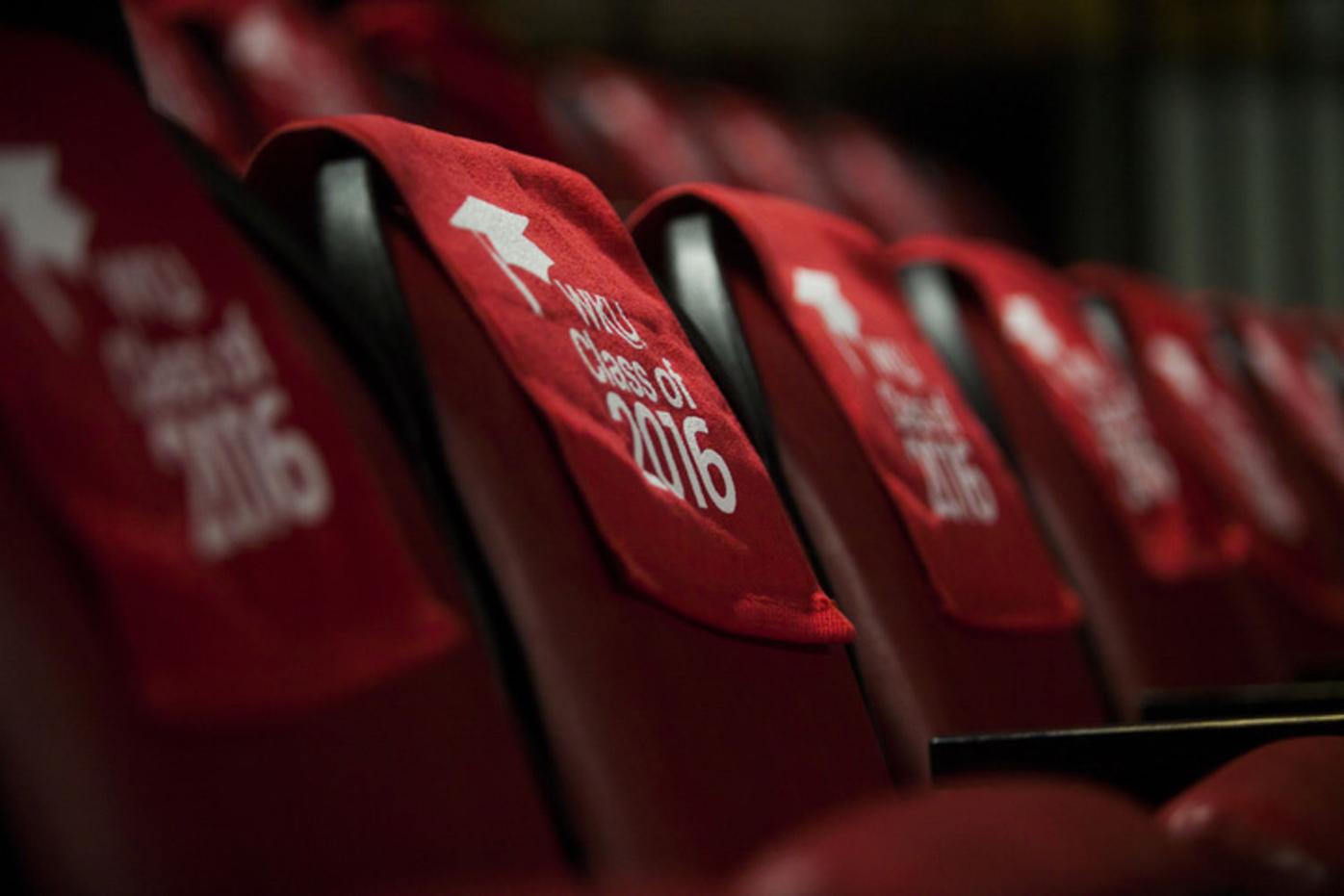 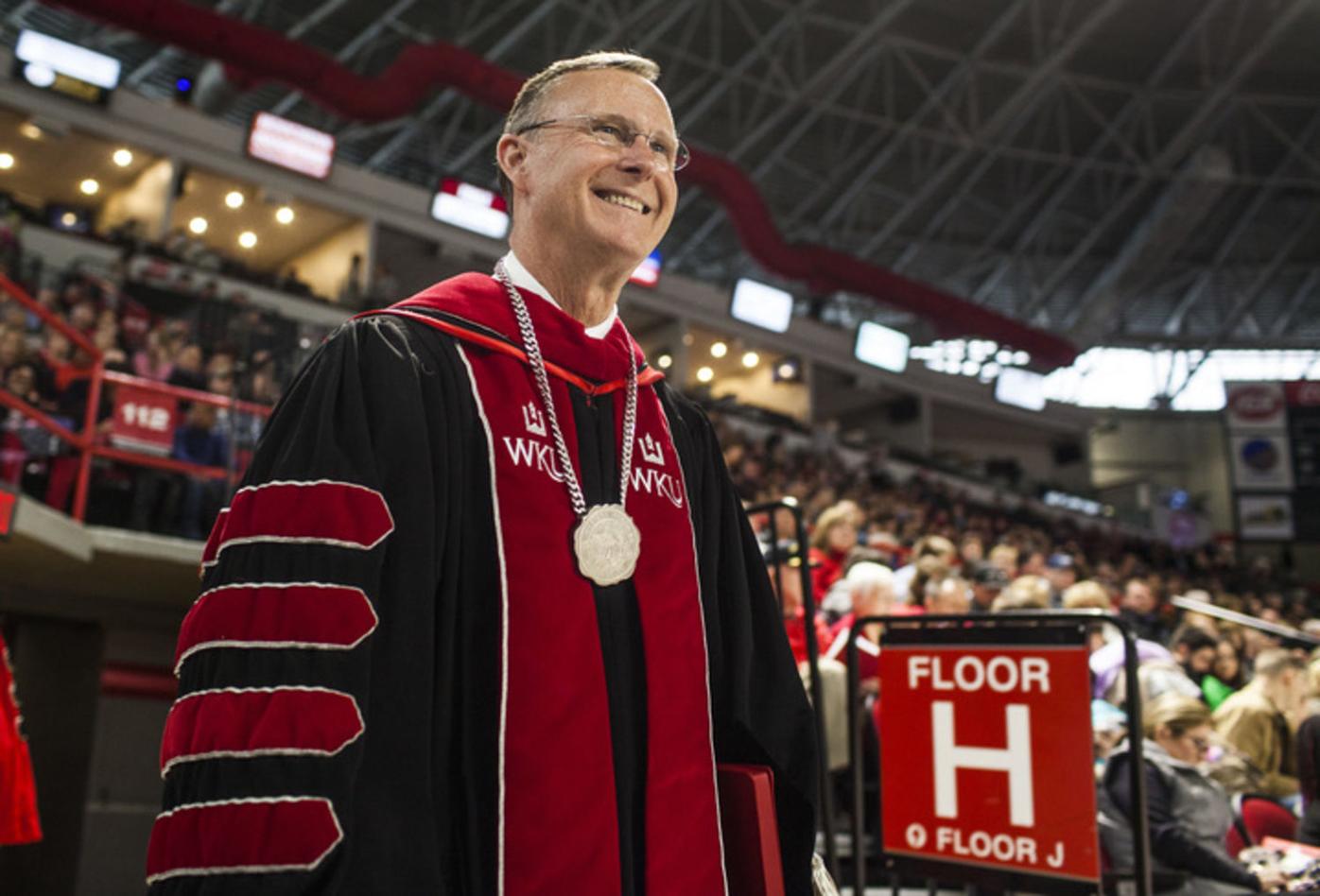 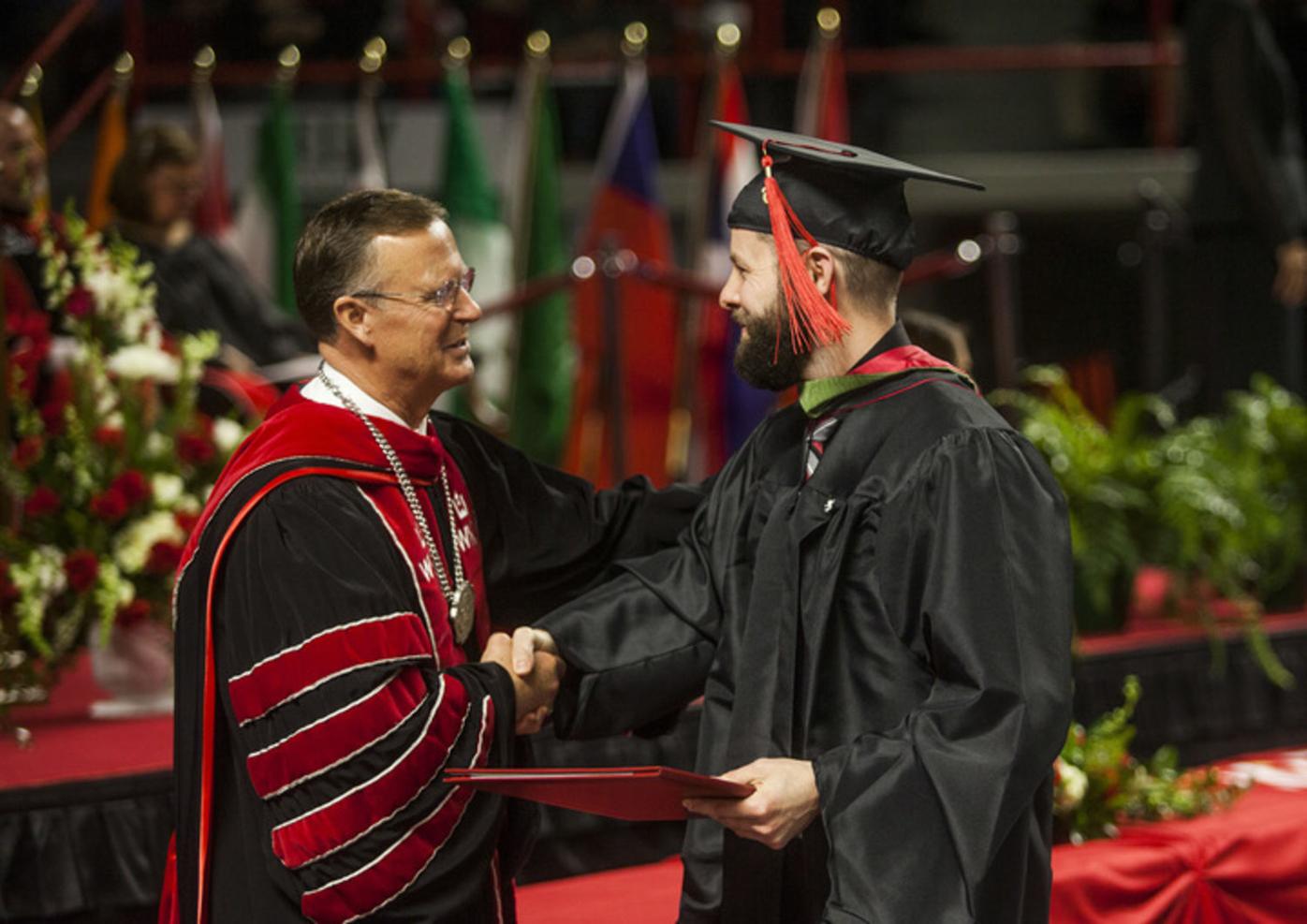 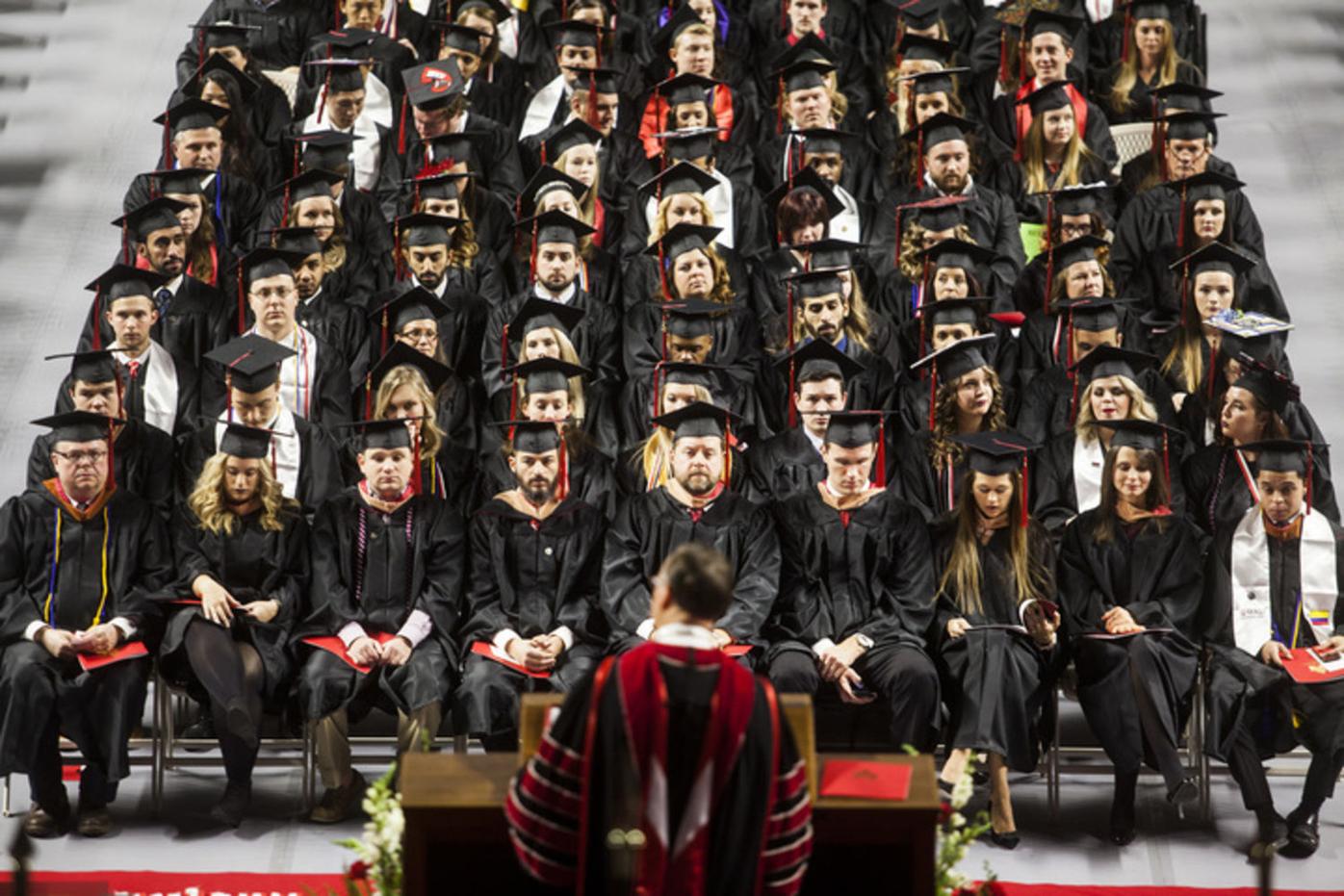 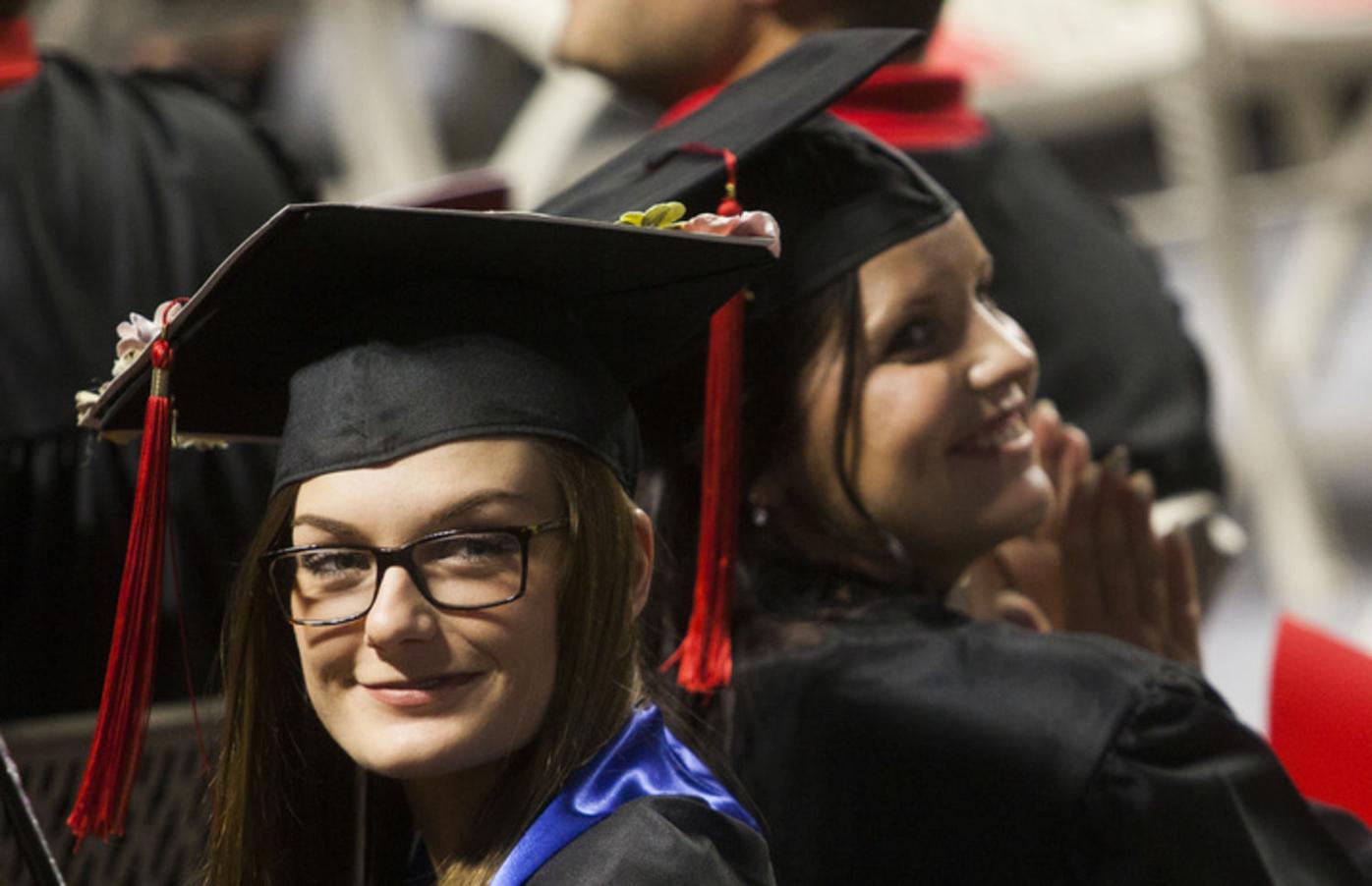 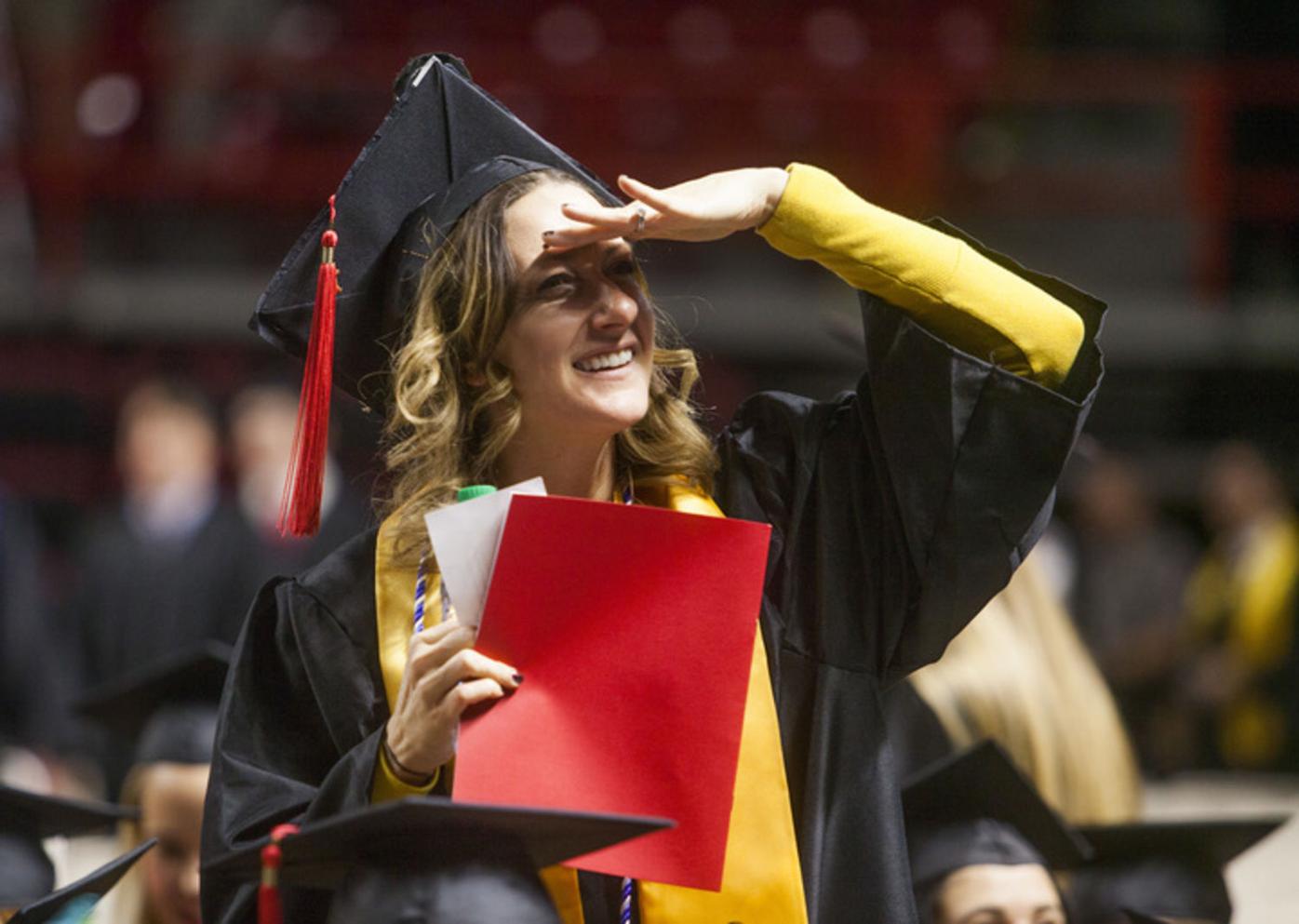 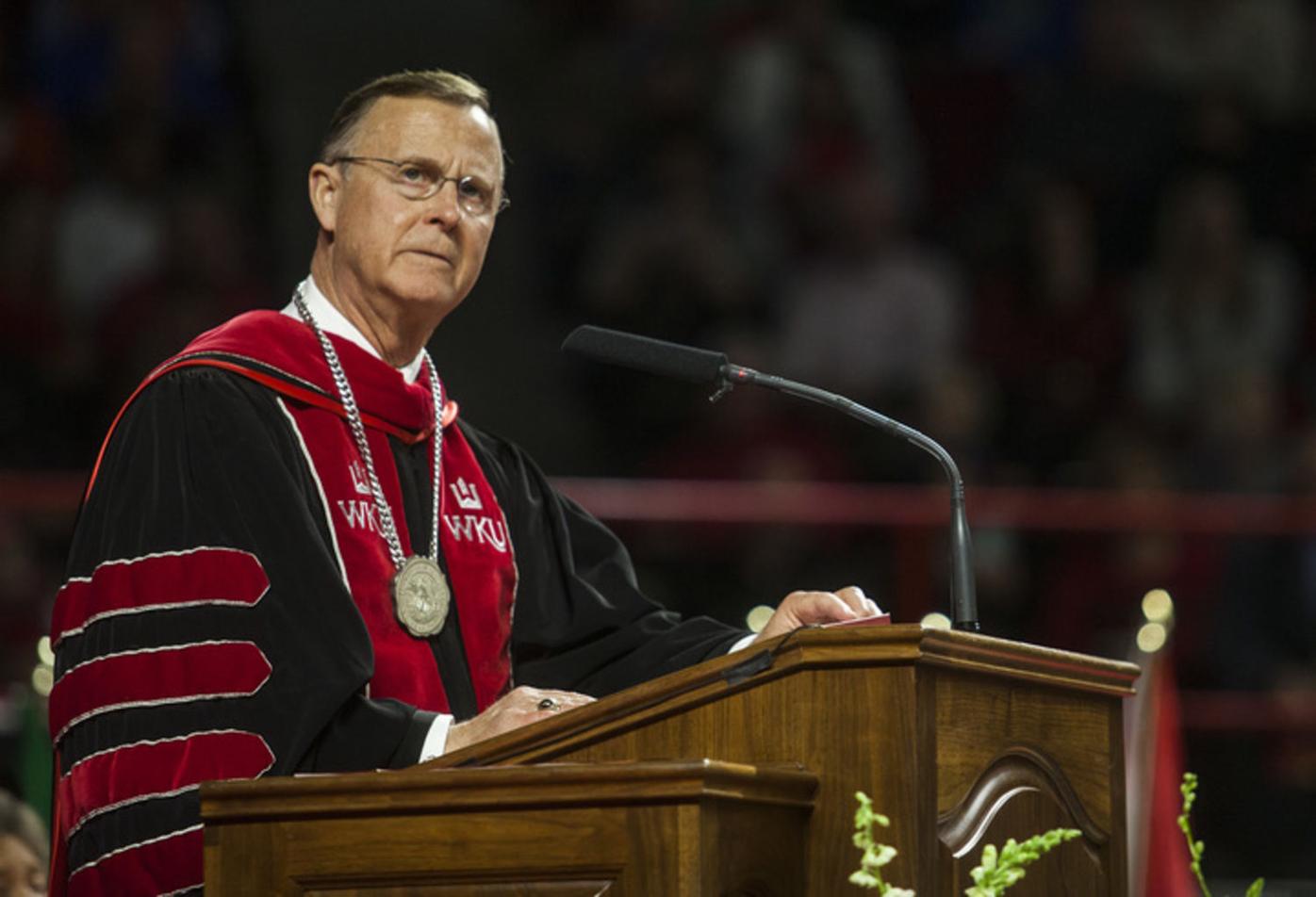 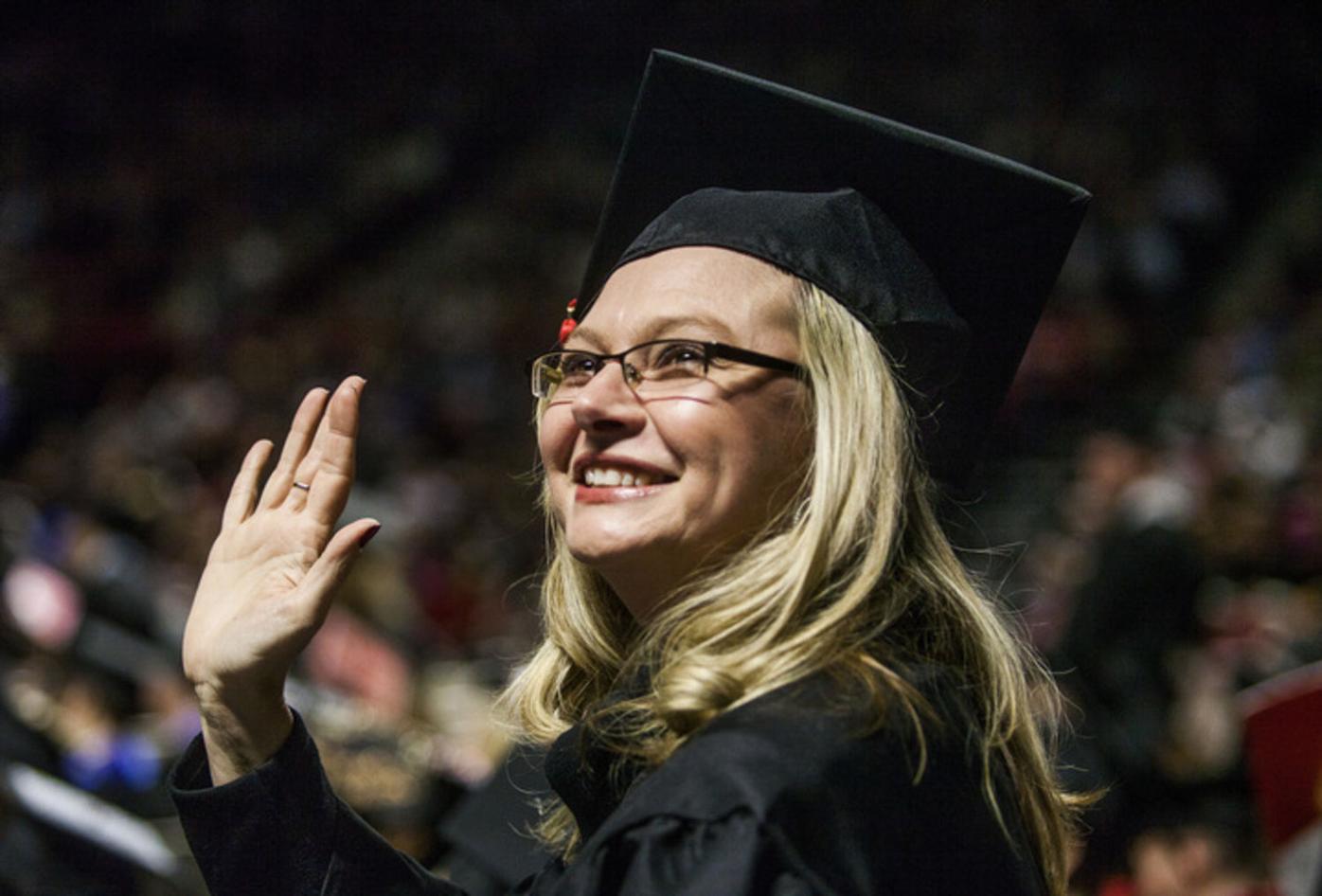 Loretta Boone of Bowling Green waves to people in the crowd during commencement on Saturday, Dec. 10, 2016, at E.A. Diddle Arena. (Austin Anthony / photo@bgdailynews.com) 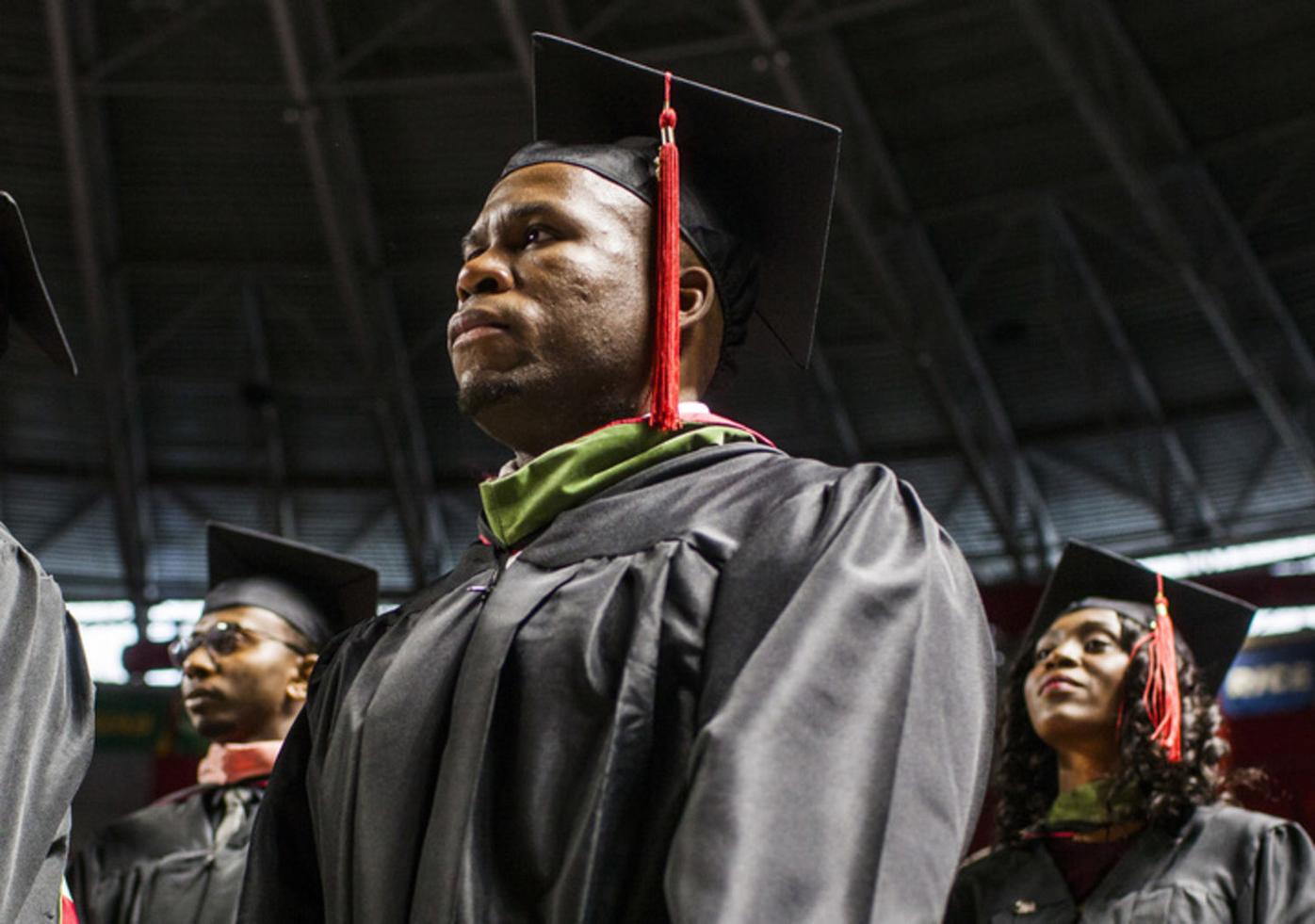 Chris Springer of Memphis stands for the playing of "My Old Kentucky Home" during commencement on Saturday, Dec. 10, 2016, at E.A. Diddle Arena. (Austin Anthony / photo@bgdailynews.com) 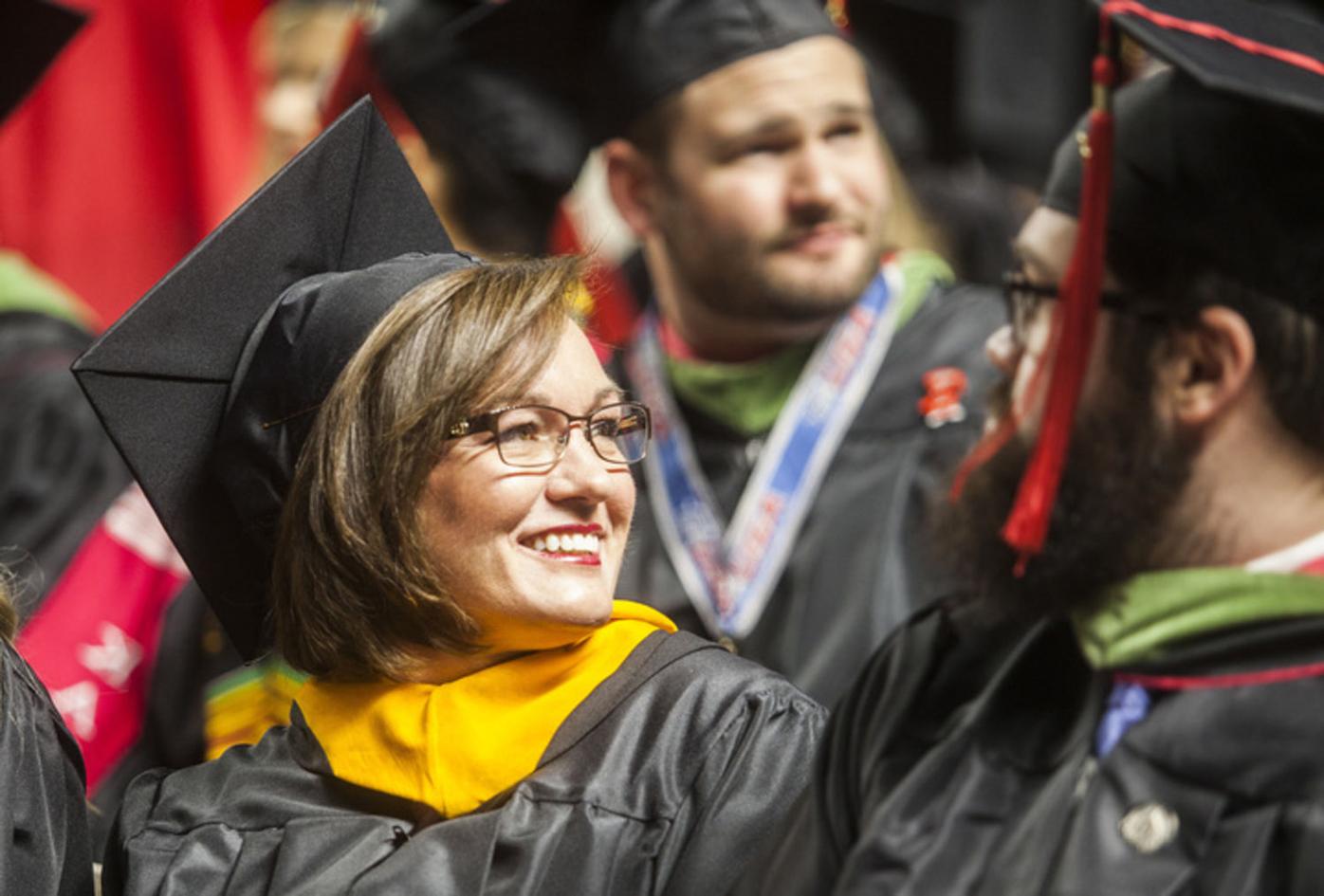 Loretta Boone of Bowling Green waves to people in the crowd during commencement on Saturday, Dec. 10, 2016, at E.A. Diddle Arena. (Austin Anthony / photo@bgdailynews.com)

Chris Springer of Memphis stands for the playing of "My Old Kentucky Home" during commencement on Saturday, Dec. 10, 2016, at E.A. Diddle Arena. (Austin Anthony / photo@bgdailynews.com)

Cruse started school when her children were young and, after getting her associate degree in accounting, she decided to pursue a bachelor’s degree at WKU.

“I always wanted it. I love school and wanted to go back,” Cruse said. “I got into banking and loved the numbers, so I decided to go into accounting.”

Curse said her husband, two children and their significant others, as well as her grandchild were rooting for her Saturday.

WKU had 1,400 students participating in its 2016 fall ceremony, with 105 international students representing 25 countries. WKU President Gary Ransdell said with an enrollment of more than 20,000 students, more and more students are recognizing that WKU is becoming a leading American university with international reach. He said the graduates play a major role in transforming the institution.

Brandon McGee of Hopkinsville received his Bachelor of Science degree in business management and said he’s been waiting for this day forever and that he just wanted to make his mother proud.

“I didn’t do this just for myself, this is for my whole family,” McGee said.

McGee said after graduation, he has plans for graduate school and to start his own business. He would like to own his own hotel one day, but if that doesn’t work out, his backup plan is real estate.

Many people sat in Diddle Arena to watch their loved ones graduate. Glasgow resident Josh Upchurch was in the stands with his daughters waiting to see his wife Shannon graduate with her degree in nursing. He said she wanted a career after having their girls.

“I couldn’t be more proud,” Upchurch said. “I told her whatever she did make sure it’s something that she was going to love and something she’d enjoy doing.”

Danielle Russell traveled from Charlotte, N.C., to see her little brother Richard Russell graduate with his master’s in recreation and sport administration. She said she was excited to see him get a degree in something he loves to do.

Ransdell made sure to give the graduates some advice as they start their new journey with emphasis on doing to others what you would have them do to you and the ability to trust yourself.

“Think for yourself ... listen to you heart ... and trust your own instincts,” Ransdell said.