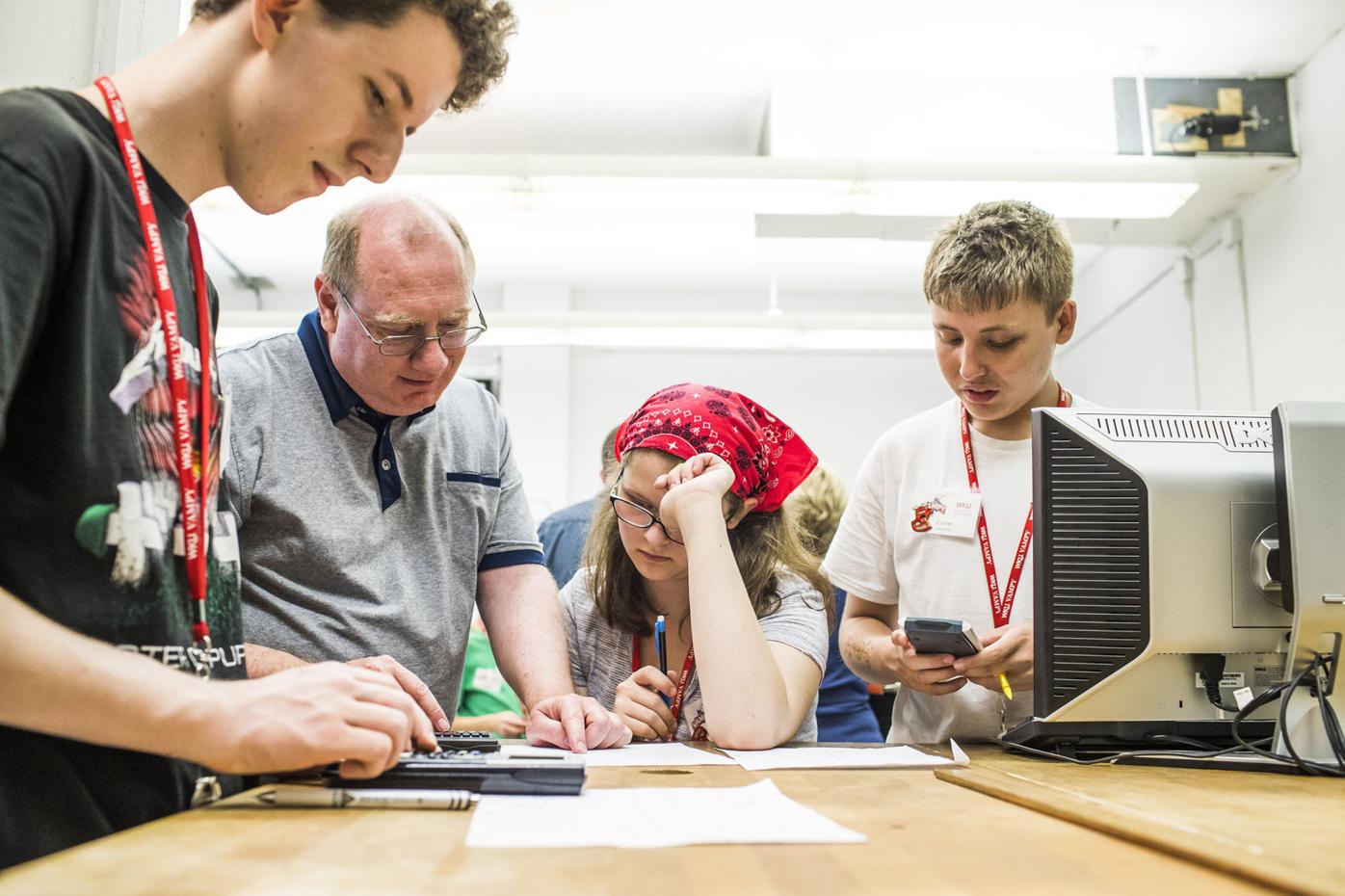 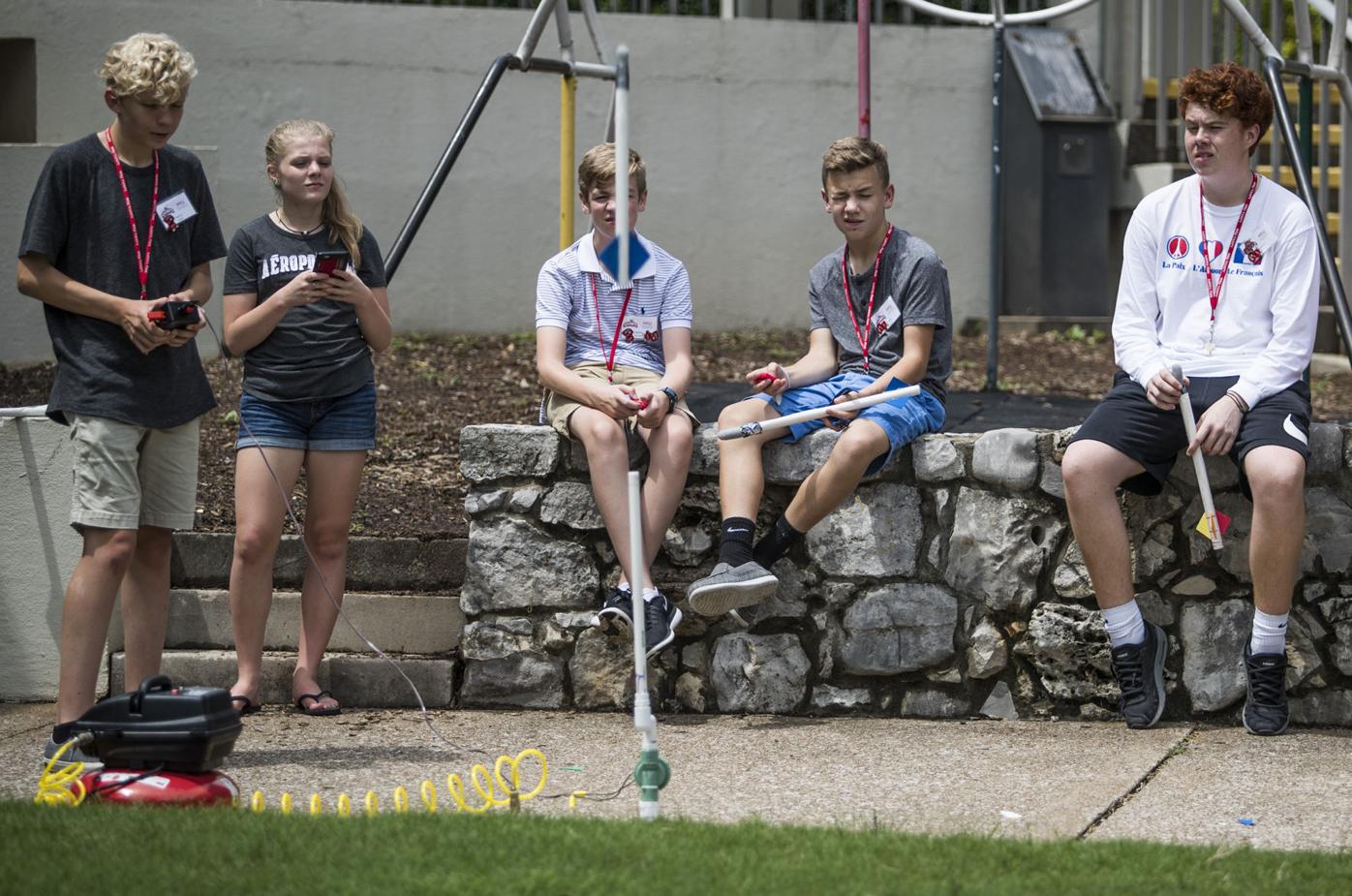 Henry Welch, 14, of Louisville, far left, launches a rocket during the summer program for Verbally and Mathematically Precocious Youth on Wednesday, July 5, 2017, in the Thompson Science Complex. (Austin Anthony / photo@bgdailynews.com) 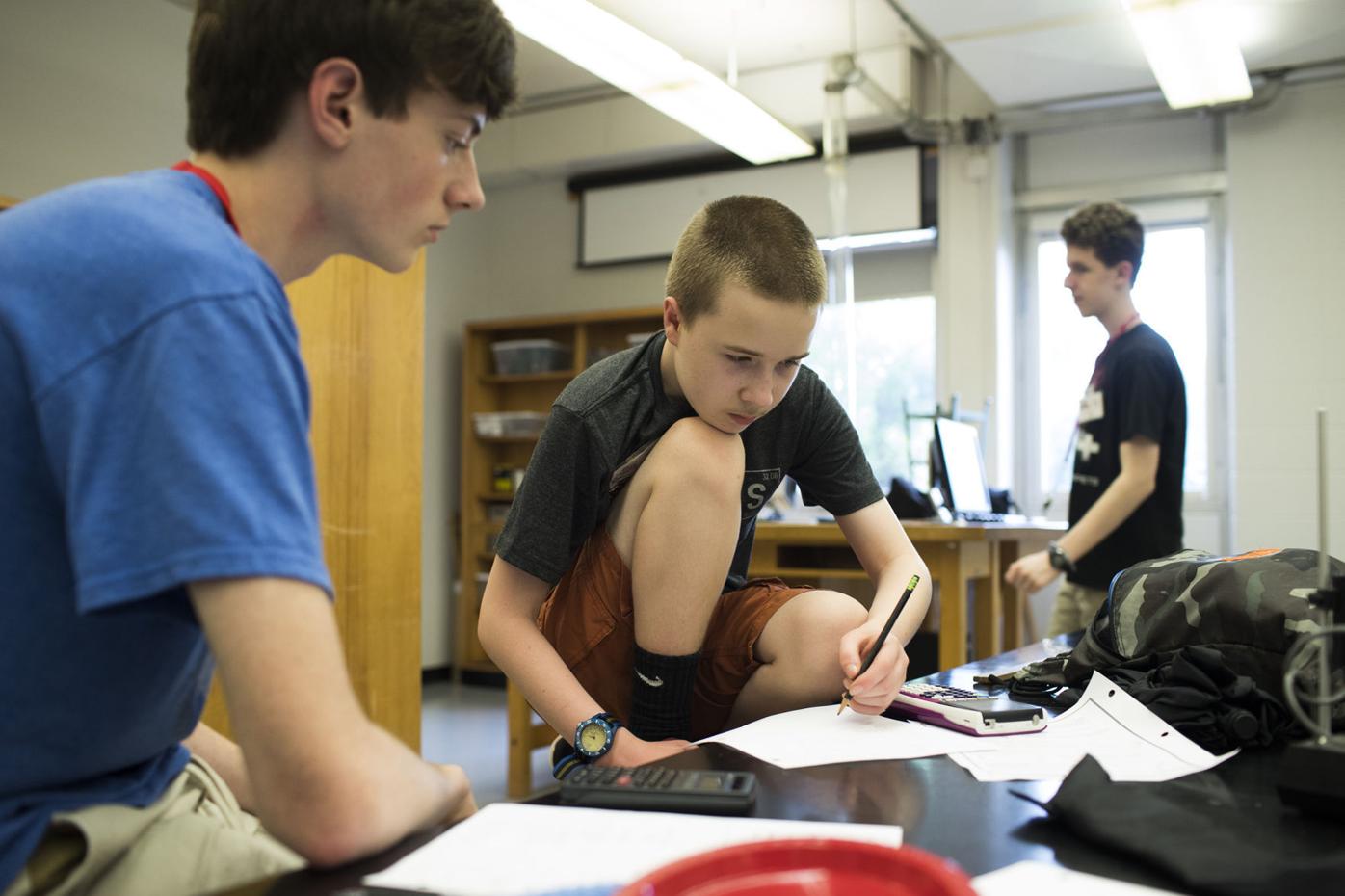 Jared Rodgers, 16, of Boone County, Ky., left, and Isaac Bentley, 15, of Hebron, Ky., work on a physics project during the summer program for Verbally and Mathematically Precocious Youth on Wednesday, July 5, 2017, in the Thompson Science Complex. (Austin Anthony / photo@bgdailynews.com)

Henry Welch, 14, of Louisville, far left, launches a rocket during the summer program for Verbally and Mathematically Precocious Youth on Wednesday, July 5, 2017, in the Thompson Science Complex. (Austin Anthony / photo@bgdailynews.com)

Jared Rodgers, 16, of Boone County, Ky., left, and Isaac Bentley, 15, of Hebron, Ky., work on a physics project during the summer program for Verbally and Mathematically Precocious Youth on Wednesday, July 5, 2017, in the Thompson Science Complex. (Austin Anthony / photo@bgdailynews.com)

For Nolan Beasley, engineering used to be just an academic interest.

It wasn’t until he got involved with Western Kentucky University’s summer program for Verbally and Mathematically Precocious Youth that he changed his mind.

“This could actually be a very cool job that I could pursue,” said Nolan, a 13-year-old student from Nashville.

Nolan, along with his other classmates in the “Problems You’ve Never Solved Before” class, spent part of their Wednesday afternoon launching rockets with an air compressor outside Hardin Planetarium. The live-in program, organized by WKU’s Center for Gifted Studies, runs for three weeks and entered its 34th summer this year.

Julia Roberts, the university’s Mahurin professor of gifted education and executive director of the Center for Gifted Studies, said the program has drawn 190 kids from 11 states this year.

The tuition-based program allows seventh- through 10th-graders the chance to take one class for six hours a day with a qualifying ACT or SAT score.

For students who can’t afford the tuition, the center facilitates sponsorships. The base tuition for this year’s program is $2,950, according to the program’s website. It covers room and board, instructional programs, books and most activities outside class.

There’s typically no more than 16 students per class, and classes feature one teacher and a teaching assistant. In a typical day, students might design and paint murals about the Holocaust or Skype with an Imagineer who designs Disney theme park attractions.

Students also get to travel. At least three classes will be visiting Washington, D.C., this week. A grant from the Qatar Foundation is allowing 11 students to study Arabic for free through the program.

For most students, the idea of a six-hour classes in the summer would seem like a chore. But that’s not the case for VAMPY students, Roberts said.

The program allows them to learn at a faster pace and more opportunities to be around kids like them.

“It’s just a treat to learn with others who are equally interested,” she said.

That’s the case for Kayla Mullin, a 14-year-old student from Louisville.

“There’s so many people here that you can just meet all different types of people,” she said, adding she’s made close friends with the students in her residence hall.

In another class, students made calculations as they rolled marbles around the insides of plastic plates of varying sizes.

Sarah Pederson, 14, of Barbourville, said she’d “never really experienced math in terms of physics before” and was happy to be broadening her horizons.

In a typical high school, Lee said, there are often a lot of distractions that get in the way of teaching kids.

He doesn’t have the problem with VAMPY and said he’s able to teach about three quarters of a year of physics in just three weeks.

“They just really want to absorb everything that they can,” he said.