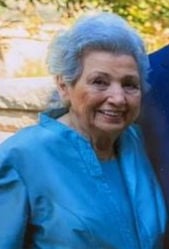 After graduating from Amity High School, in Arkansas, Sue moved to Memphis, then California and finally settling in Owasso, Oklahoma, where she started a family.

Sue was the beloved Mother of three sons; two of whom survive, Craig Chandler (Marrillyn) of Orlando, Florida and David G. Chandler (Amy) of Bowling Green, Kentucky. Sue was predeceased by her oldest son, Barry Chandler, of Owasso, Oklahoma.

Sue was married to Chuck Stringer, a World War II Purple Heart recipient, for 42 years, before his passing.

Sue was also the proud Grandmother of Michael Chandler of Orlando, Florida and the bonus Grandmother to Abby, Chloe & Ruth E Milliken.

Sue was an entrepreneur. She worked tirelessly to support her three sons. In a time when women didn't own their own companies, Sue started and managed her own successful insurance company – C & B Insurance Company – in an effort to set an example and provide a good life for her sons.

Sue was passionate about her faith. She reared all three sons to love Jesus Christ as their Lord and Savior. Sue knew when she left this earthly body she would know joy and beauty, the likes of which she had never known before. Sue was a founding member of Crossland Community Church in Bowling Green, Kentucky.

In 2002 Sue moved to Bowling Green, Kentucky to be closer to her son, David. She and Chuck moved in to Chandler Park Assisted Living in 2009, where she lived for 13 years prior to her passing.

Sue's life will be celebrated graveside in Arkadelphia, Arkansas at Rest Haven Memorial Gardens on October 13, 2021 at 2:30 pm. Ruggles-Wilcox Funeral Home will be in charge of arrangements in Arkadelphia, AR.

Local arrangements have been entrusted to the care of J.C. Kirby & Son, Lovers Lane Chapel.

In lieu of flowers, the family would ask that any expression of sympathy be made to The Foundry, a local Christian non-profit corporation focused on preschool education for children who would not otherwise have the opportunity. Donations may be mailed to: The Foundry, 531 West 11th Avenue, Bowling Green, Kentucky 42101.