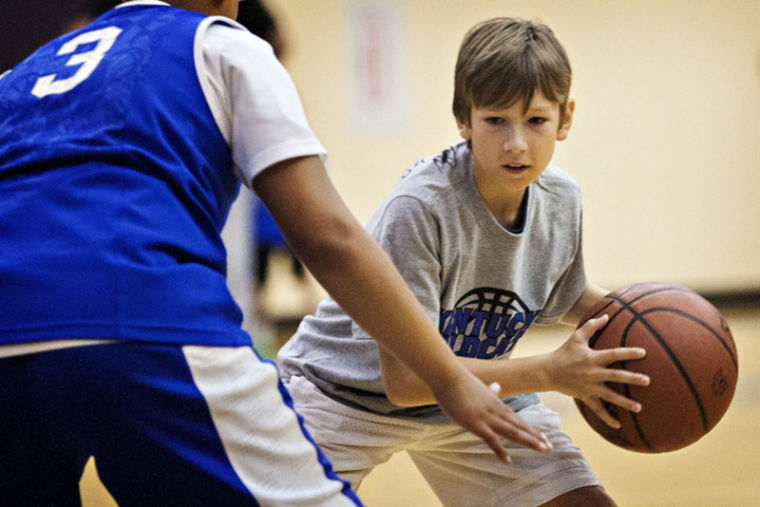 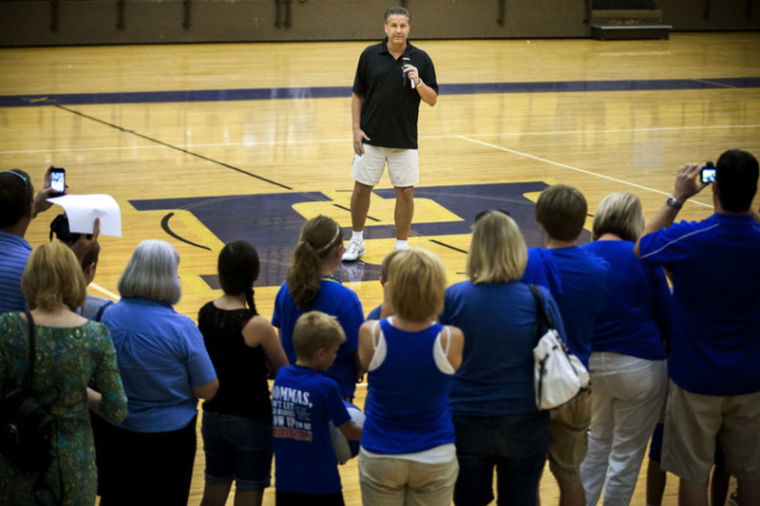 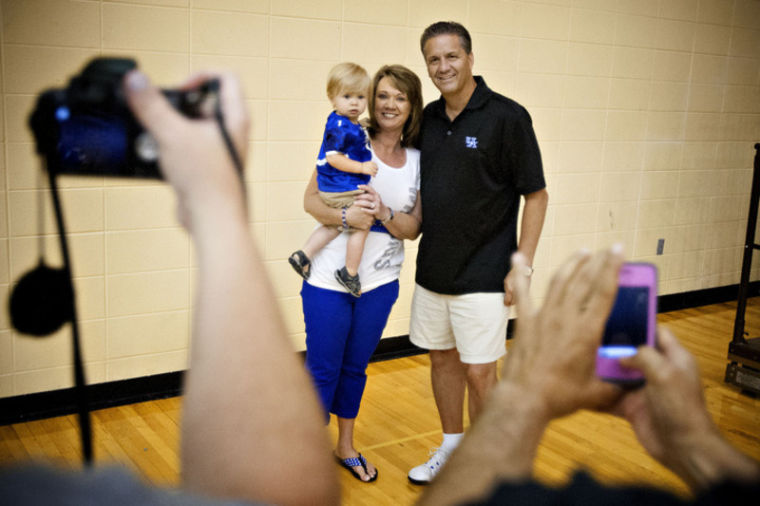 Above: Mendy Mogan holds her 15-month-old grandson Wyatt Morgan, both of Glasgow, on Friday while posing for a picture with University of Kentucky head basketball coach John Calipari during the John Calipari Satellite Camp Tour at Bowling Green High School. Left: Max Humphreys, 11, of Owensboro, goes to the hoop during the camp. Photos by Alex Slitz Daily News

Above: Mendy Mogan holds her 15-month-old grandson Wyatt Morgan, both of Glasgow, on Friday while posing for a picture with University of Kentucky head basketball coach John Calipari during the John Calipari Satellite Camp Tour at Bowling Green High School. Left: Max Humphreys, 11, of Owensboro, goes to the hoop during the camp. Photos by Alex Slitz Daily News

The hope for Kentucky basketball, annually, is to win a national championship.

The 2013-14 season is no different, and with the buzz surrounding coach John Calipari's latest freshmen class, title talk has been loud.

That doesn't mean the Wildcats expect to waltz to the 2014 Final Four in Arlington, Texas.

"We just played in the NIT and lost to Robert Morris in the first round," Calipari said Friday. "I think that's enough to humble you."

About 90 kids arrived early and eager to learn fundamental drills from the UK staff while their parents jockeyed for autographs and pictures with Calipari.

"The fun thing for me is, not only working with the kids, you have most of the people say you're the first Kentucky coach I've been able to meet in person," he said. "What I felt when I first moved here was that we need to get out in this state and let people know who we are and what we're about."

After stopping in Bowling Green, the tour moved on to Elizabethtown in the afternoon. After that, the Cats will be one day closer to the season opener Nov. 8 against North Carolina-Asheville and one more day removed from last season's 21-12 disappointment.

Aaron and Andrew Harrison of Richmond, Texas, Dakari Johnson, Marcus Lee, Julius Randle and James Young –  all five-star recruits – are expected to make their debuts that night against UNCA and help usher in another new season of UK hoops.

"We have more players that are young that are going to have to learn," Calipari said of the group he's brought in. "It's not the greatest talent that wins – it's the best team with the best talent. Now let me say this, if you think you can win with bad players, have at it. You have at it all you want. I'd rather have the most talented players and try and get them together."

The Cats won't be able to replace Nerlens Noel, a one-year standout at Kentucky last season who is expected to be a high first-round pick in Thursday's NBA Draft.

"It depends on what the team's needs are, but I would say he's the most talented player in the draft with the most upside in the draft," Calipari said. "There are players who are ahead of him right now – but he's 7-foot and he blocks shots. If you think you can grow a guy who's 7-foot or get him to block shots, have at it.

"If you need a guy to score baskets, yeah, every year in the draft you're going to get some guys to do that. He has a unique skill and a unique talent which puts him in that position."

Without Noel – and fellow early departure Archie Goodwin – Kentucky will reload with a class Calipari hopes will come together by March.

"I've coached a lot of good teams that had a lot of good talent," Calipari said. "My hope is that this is a talented team who really comes together – and it's going to take time. Early in the year we're going to struggle some."