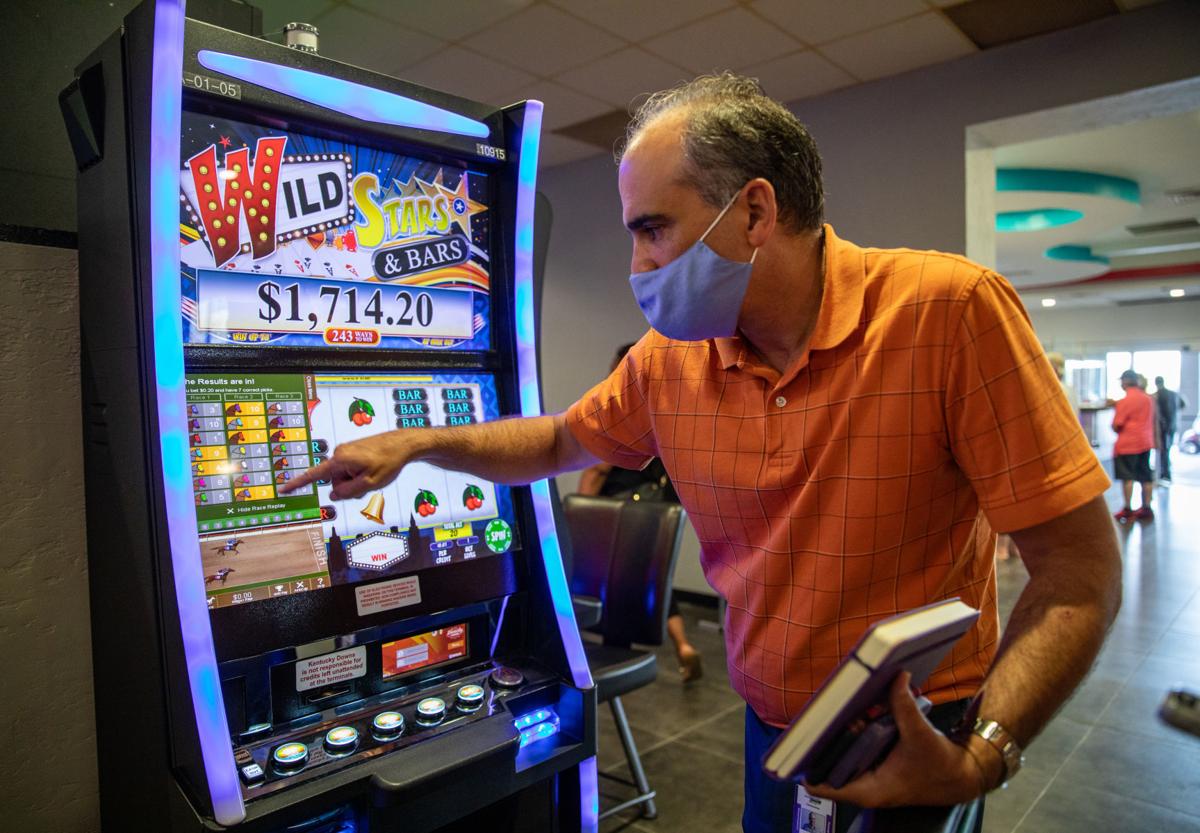 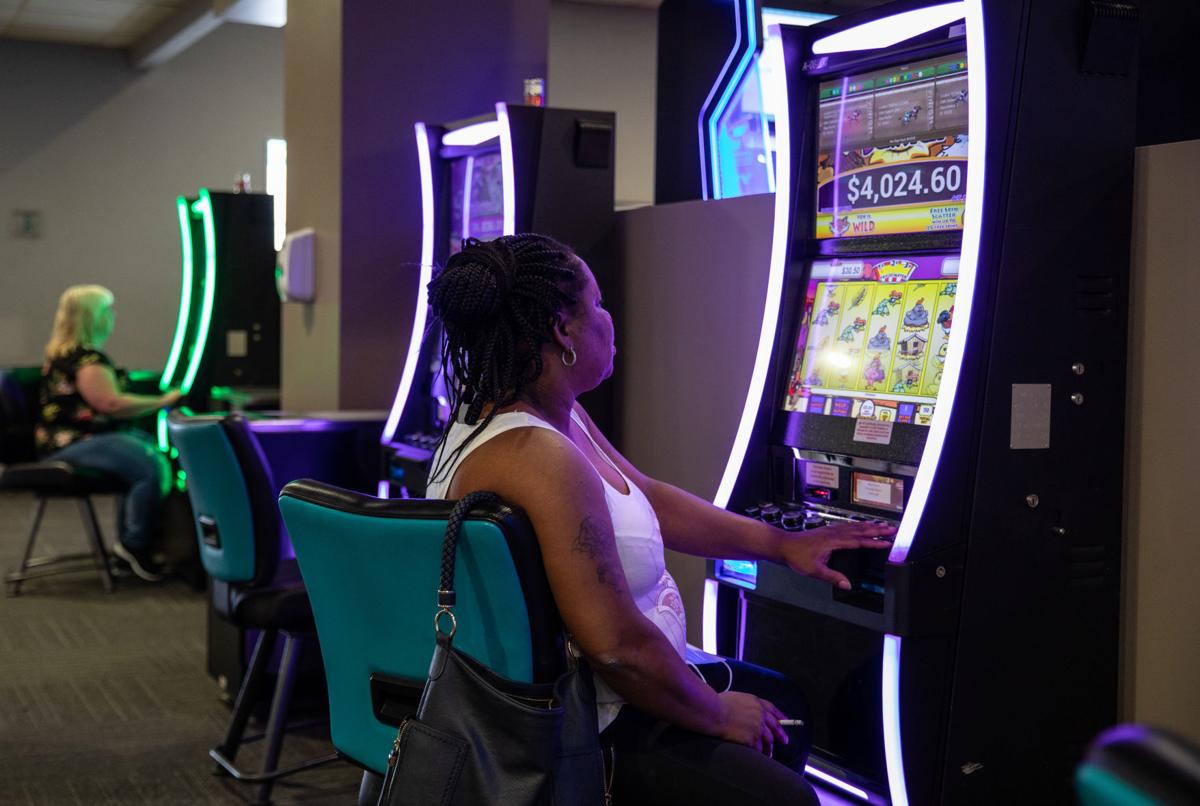 Jazman Scales of Nashville, Tenn., plays on one of the Historical Horse Racing machines at Kentucky Downs on Tuesday, June 23, 2020. The facility hopes to expand the number of HHR machines in the near future. (Grace Ramey/photo@bgdailynews.com) 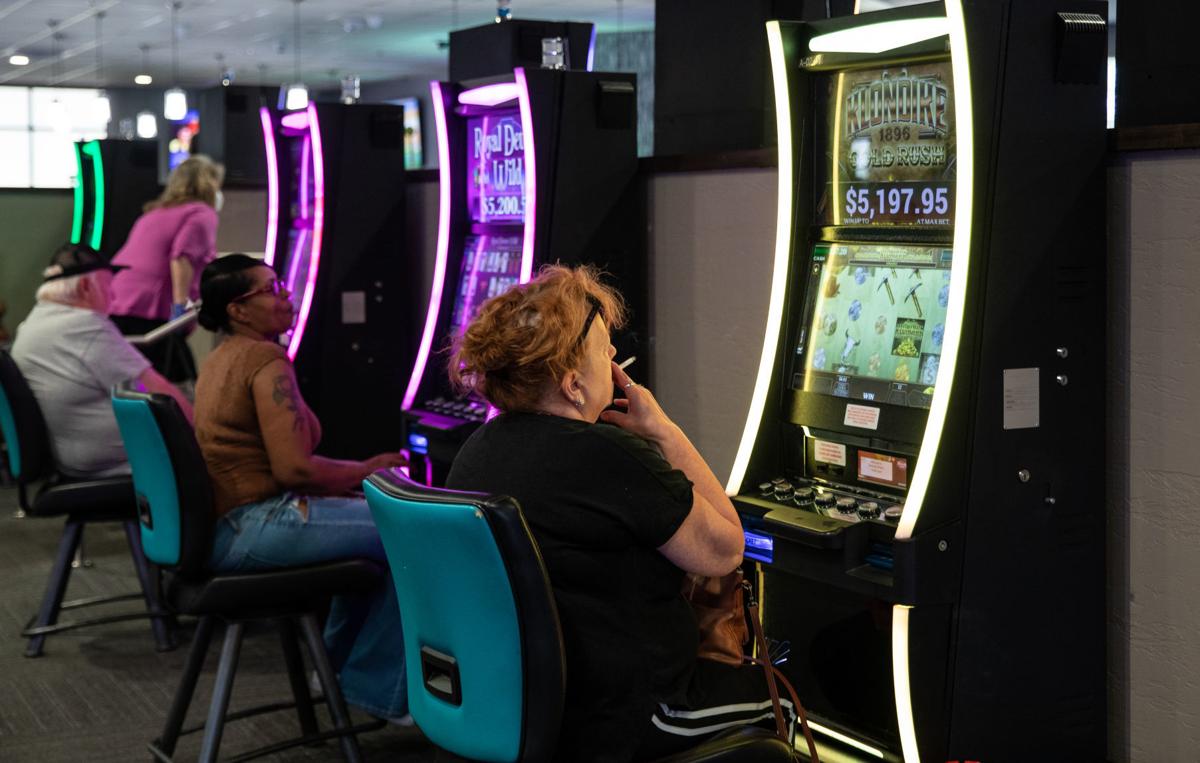 Visitors play on some of the Historical Horse Racing machines at Kentucky Downs on Tuesday, June 23, 2020. The facility hopes to expand the number of HHR machines in the near future. (Grace Ramey/photo@bgdailynews.com) 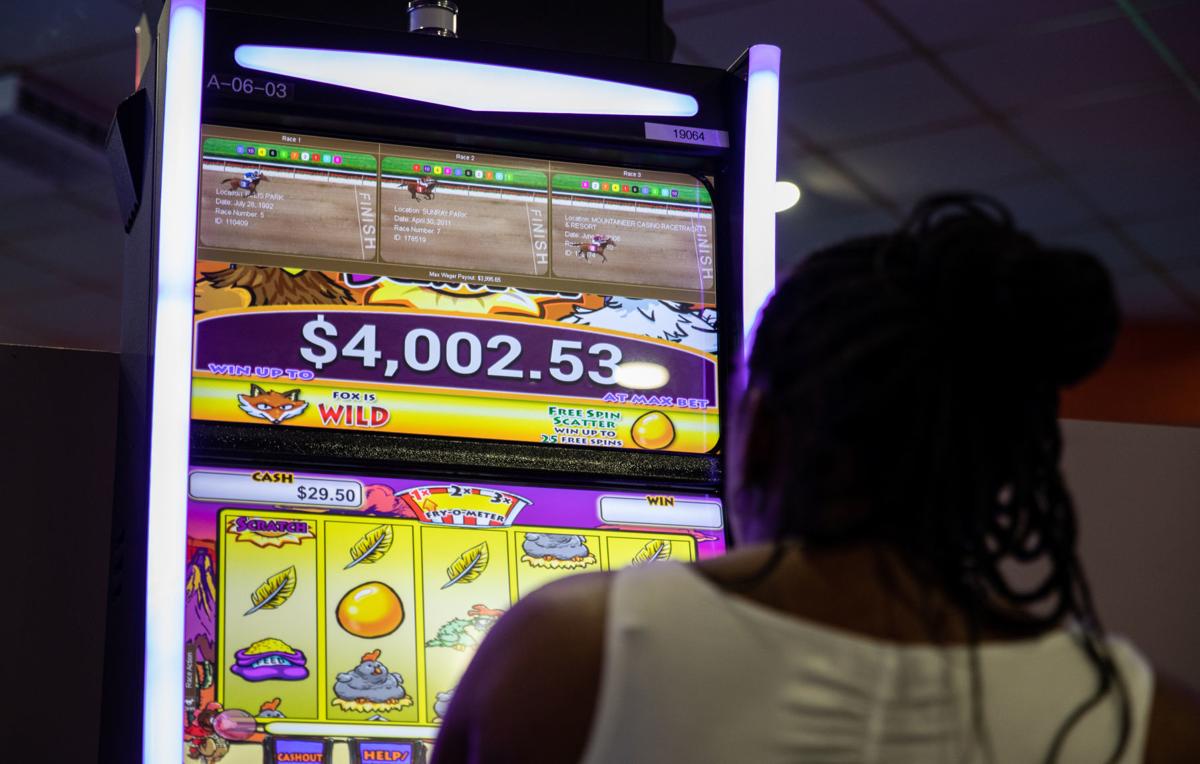 Jazman Scales of Nashville plays on one of the Historical Horse Racing machines June 23 at Kentucky Downs in Franklin.

Jazman Scales of Nashville, Tenn., plays on one of the Historical Horse Racing machines at Kentucky Downs on Tuesday, June 23, 2020. The facility hopes to expand the number of HHR machines in the near future. (Grace Ramey/photo@bgdailynews.com)

Visitors play on some of the Historical Horse Racing machines at Kentucky Downs on Tuesday, June 23, 2020. The facility hopes to expand the number of HHR machines in the near future. (Grace Ramey/photo@bgdailynews.com)

Jazman Scales of Nashville plays on one of the Historical Horse Racing machines June 23 at Kentucky Downs in Franklin.

FRANKLIN – The live racing season at Kentucky Downs remains a few months away, but that doesn’t mean there’s no way to win money off betting on horse racing at the Franklin track.

Kentucky Downs offers the traditional simulcast option for horse players – live races streamed from other tracks that offers on-site wagering – but the vast majority of the total handle at the track comes via Historical Horse Racing. In 2019, the total handle at Kentucky Downs derived from HHR wagering topped $1 billion, the latest in what has been a steady yearly increase since the machines were introduced to the track starting in 2011.

That handle is bound to drop some in 2020, with the onset of the coronavirus pandemic forcing the track to shut down from March 16 until it was allowed to reopen June 10. To adhere to state protocols regarding social distancing, the track had to reconfigure its gaming floor with the result of about 200 fewer game terminals available for play.

“It’s been a pretty steady increase in interest from guests, whether on the Kentucky side of the border or the Tennessee side of the border,” Kentucky Downs senior vice president and general manager Ted Nicholson said. “We’ve got a blip on the screen, obviously, with having to shut down for almost three months. But it’s been nice to see guests come back.”

Many of those guests are from just across the state line in Tennessee, where the track heavily markets in the Nashville metro area as well as north in Bowling Green. Many are admittedly not horse racing fans, but that is no obstacle from participating in the parimutuel historical horse racing offered at Kentucky Downs.

Those HHR machines at Kentucky Downs superficially play like video slots as well, with light-up displays showing the familiar vertical spinning columns of images, from cherries to free play, that indicate if and what a player has won.

For newcomers to HHR machines, the setup is at least visually similar to video slot machines offered in some other states, including gambling industry leader Nevada. Kentucky state law doesn’t allow that type of Class III gaming, where gamblers are playing against the house. Parimutuel wagering – where bets are pooled together and the house takes only a percentage of the net pool – is allowed in the Commonwealth, leading to the rise of HHR machines.

Players – who must be age 21 and provide a valid ID to participate – can choose to utilize the HHR machines as they wish, with most opting for random play. HHR machines utilize past horse races at tracks nationwide to operate, with the results of those races constituting the winning numbers on the game. For each play on an HHR machine, three historical races are incorporated to create the potential winning combination. The actual placement of the horses from those historical races – at least one through eight – comprise the winning numbers.

Hit on the maximum amount of correct numbers with the maximum allowable – $2 to $3 – and a player has the opportunity to hit a massive parimutuel jackpot. That’s what happened at Kentucky Downs on June 18, when one player took home a whopping jackpot of $741,000 – the second-highest ever at the track.

The HHR machines do offer the option to roughly handicap the races, if players wish, with raw statistics on jockey, trainer and horse past performances available under a race information button.

Players don’t know who, when or where those results come from until the game starts. And handicapping isn’t easy, with players needing to correctly predict and manually input not just the top finishers but the exact placements of the entire field for three different races on each separate play of the machine.

“Across the top, it will tell you the day, the track and the race number,” Wholihan said. “If you went and looked it up, that was the fourth race at Arlington Park in June of 1999. The six beat the four, who beat the three and they’ll list all the eight or 10 horses that ran.”

It isn’t necessary to hit on every correct number to win, with varying jackpots available based on wager and the amount of correct numbers. Players are not required to place a maximum bet each time, unless they want a shot at the biggest jackpot. While the HHR machines may feature different displays, they can be on the same progressive parimutuel pool – it’s easy to tell, just look at the available jackpot.

Those HHR machines benefit not only Kentucky Downs, but the entire state thoroughbred industry. Since the introduction of historical horse racing at the track in 2011, horsemen have seen total purses skyrocket for Kentucky Downs’ annual meet. In 2011, the last year the meet didn’t receive any funds from HHR, Kentucky Downs offered $769,810 in total purses. One year later, total purses jumped to $2,086,650 (with 77 percent derived from HHR).

Last year, Kentucky Downs’ five-day meet (50 races) offered $11,520,380 in total purses with 86 percent of that derived from the track’s HHR machines. As a result, the turf track at Kentucky Downs has annually offered among the richest purses in the nation. That makes it much easier for Nicholson to draw world-class fields to fill the track’s cards each day of racing.

“That’s the fun part about it,” Nicholson said. “We do generate a lot of revenue downstairs to allow us to give purses that are enticing, so that as long as that horse is a Kentucky-bred you’re definitely going to be running for a lot of money. It’s nice to be able to offer that.”

Those HHR machines don’t just benefit Kentucky Downs and its available purses. Through an agreement with the Kentucky Horsemen’s Benevolent and Protective Association (HBPA), the track transfers money to Ellis Park in Henderson for that state track’s purse account. Last year, Kentucky Downs sent $5 million to Ellis Park – up from $2.9 million in 2018, when the Franklin track also transferred $500,000 apiece to Churchill Downs and Keeneland.

“The last few years if you look at the purse structure that Ellis has been able to entice (entries), it’s stronger and stronger based on really the revenues that have been derived from here,” Nicholson said. “So it’s been a nice effect on the overall horse racing in Kentucky atmosphere.”

This year’s six-day meet at Kentucky Downs has been impacted by the COVID-19 pandemic, with lost HHR revenue forcing some purse reductions. This year’s all-turf RUNHAPPY Meet at Kentucky Downs (Sept. 7, Sept. 9-10, Sept. 12-13, Sept. 16) offers total purses of about $12 million and features five Grade 3 races which promise to draw top entries once more.

“It does affect our purses in the condition book that we just came out with,” Nicholson said. “Maidens over the last few years have been running for about $130,000 and they’re going to run for upper $90,000s now, so we’ve made a reduction,” Nicholson said. “We’re hoping that with our levels of business that we’re able to not only be able to do what’s in the book but to be able to help Ellis out to some degree. I don’t know what that’s going to be. I don’t have a crystal ball, I wish I did, but if the levels are what we hope they are then we should be able to support Ellis to some extent.”

Kentucky Downs is facing impending competition with the opening of a nearby harness track in Oak Grove, with that facility planning to eventually offer HHR racing as well, perhaps as soon as this year. That facility, near Clarksville, Tenn., could impact the Franklin track’s revenue by drawing guests away.

Before the coronavirus pandemic, Kentucky Downs featured 753 HHR machines. That number has dropped to 515 at present as the facility had to reconfigure to meet social distancing guidelines of six feet between players. Once those restrictions ease, those HHR machines will again be available.

An ongoing expansion of the facility also offers the potential of increased HHR revenue for the track. That project remains on schedule, Nicholson said.

“When the new building is open, we’re going to have anywhere between 1,100 and 1,200,” Nicholson said. “We’re hoping to be open right around the first of September.”{&end}

love this place! Can’t wait to stop in and play! :)