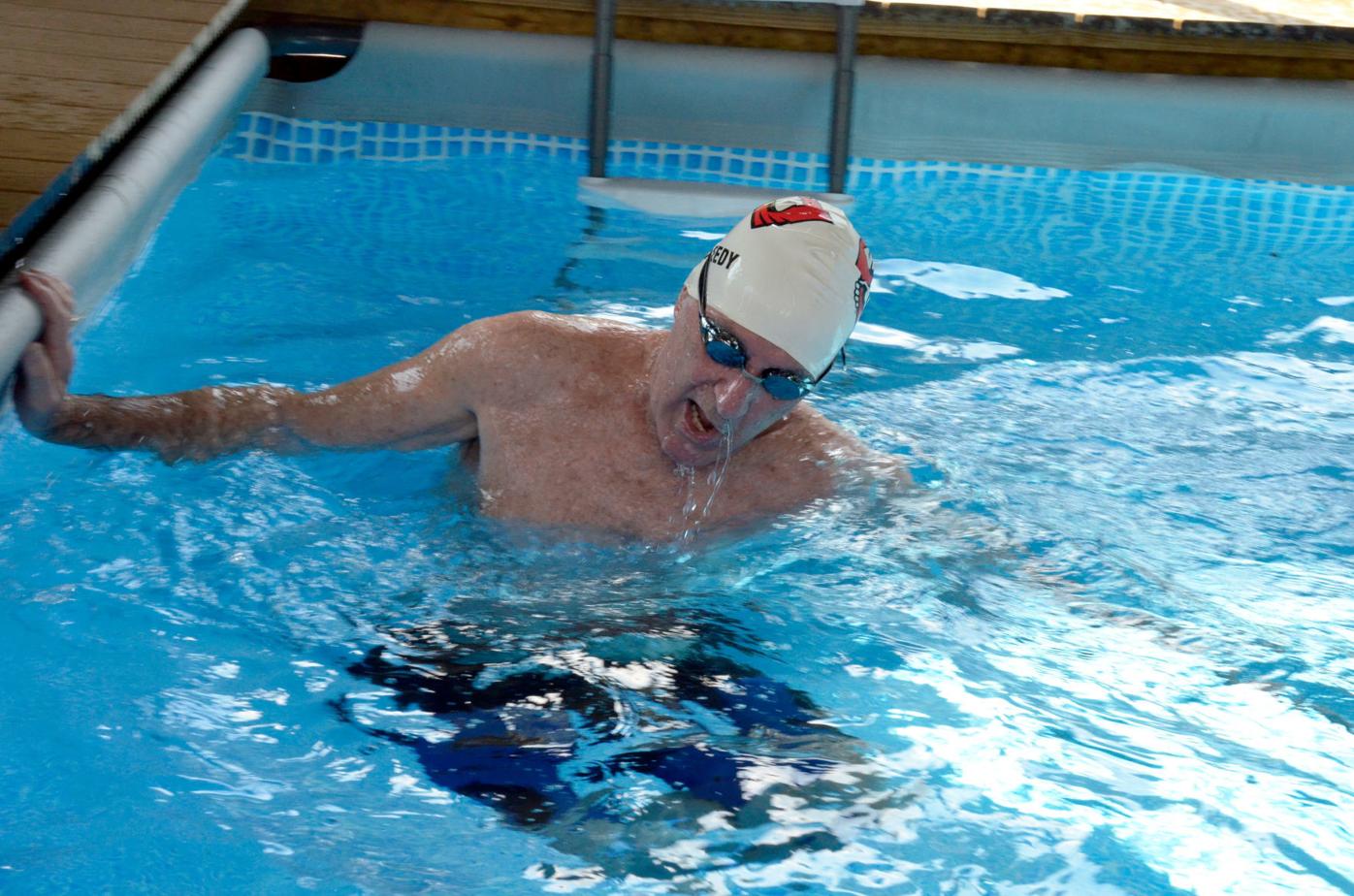 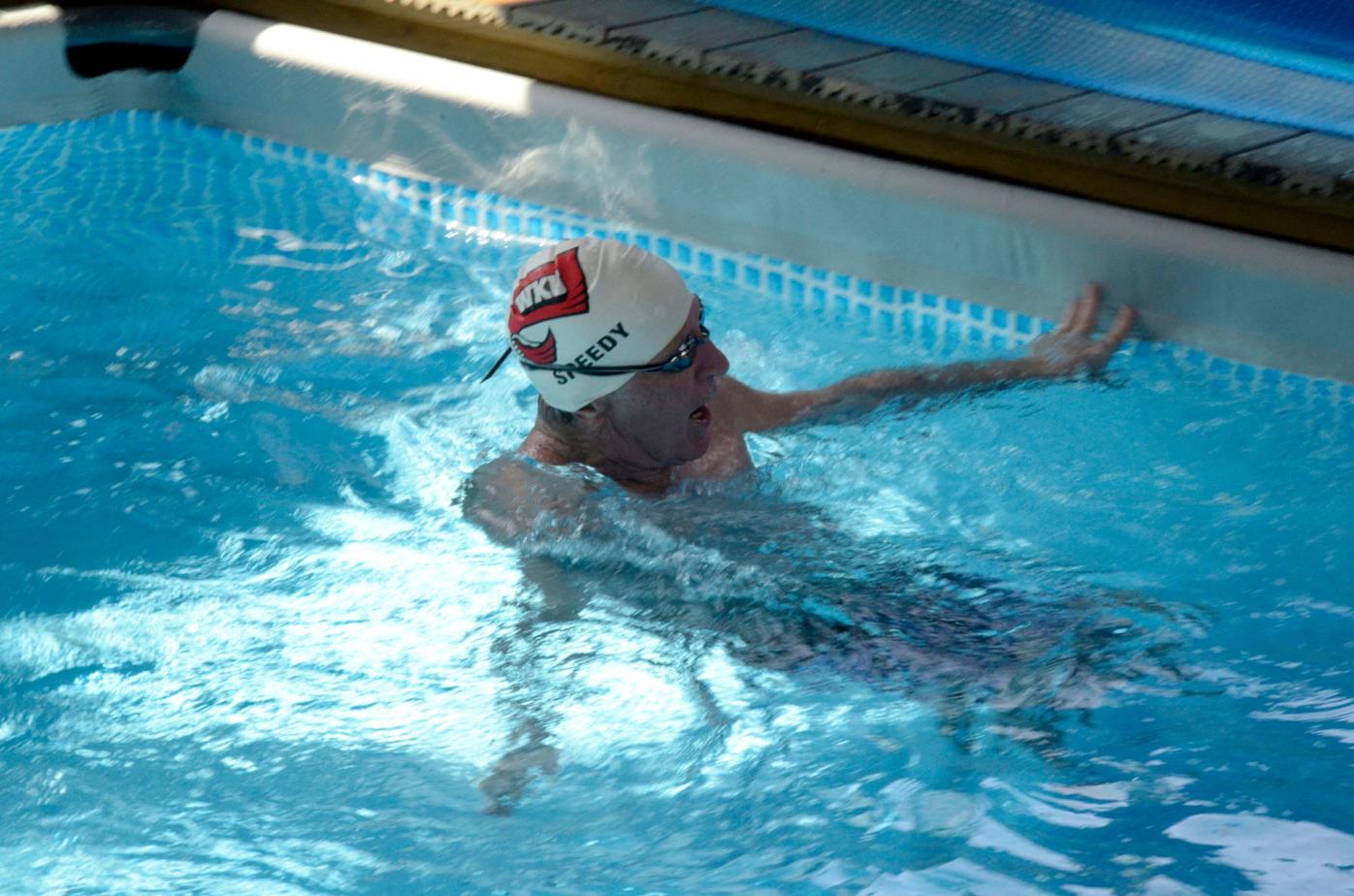 With pools in the area closed due to the coronavirus pandemic, Bill Powell’s birthday tradition of swimming a length for each year he’s been alive was in jeopardy.

But on Saturday, the former Western Kentucky swimming coach was able to keep the tradition going by celebrating his 83rd birthday with 83 lengths completed at a recently-built pool located at the home of Penny Noyes and Craig Wickman in Bowling Green.

“I had my doubts. In February or March everything got closed down, so I hadn’t been swimming for several weeks and then Penny called me about this and I said, ‘Great,’ ” Powell said after Saturday’s swim. “So I got over here and started swimming almost every day here.”

The pandemic did postpone the yearly event – Powell’s birthday is actually April 13 – but he was able to complete it for the 37th consecutive year. For the first 35 years, the event took place at the pool that bears his name at WKU, where he coached for 36 years until 2005. Last year’s was moved to the Warren County Aquatic Center, where he helped raise money for RACE Aquatics with a Sprint-A-Thon after he completed his birthday ritual. Young swimmers paid $82 in recognition of Powell’s birthday to participate. He’s hoping he can go back to that in the future.

While his birthday featured fundraising and larger spectator attendance in the past – he says there were about 100 of his former swimmers watching at his 80th birthday – the 83rd was limited to Powell and his wife Joey, Noyes and Wickman, as well as close friends Neil Romney, Nate and Jeff Stine and Brent Norris.

The pool he did his 83rd birthday swim in was only recently built by Wickman, who owns Wickman Construction Company, with design ideas from Noyes, his wife who was selected by the magazine Swimming World as one of 12 World Masters Swimmers of the Year in an article published in the April edition. The 24-foot pool – about 1/3 the size of a normal pool, according to Noyes – started getting used by Powell for training in April after a wood-burning furnace was attached to heat the water.

“As soon as that happened, I texted Joey and Bill and said, “Hey, you can come out and swim if you want.’ They said, ‘No, no,’ but I sent a couple of pictures and they said, ‘We’ll be there tomorrow,’ “ Noyes said. “He’s been coming almost every day since then. It’s been about three or four weeks now. He got to train a little bit for the swim today.”

Noyes was a volunteer assistant under Powell near the end of his coaching career at WKU and has been attending his annual birthday swim for roughly 14 years, even joining him for one to help him keep pace.

While it was important for Noyes to keep Powell’s tradition alive, she’s hoping he can get back to his normal-sized pools for future swims. Last year’s event took roughly 45 minutes to complete while this year’s took under 15. He said he normally swims 3,000 yards a day, but has been getting about 1,500 recently.

“Hopefully a bigger pool will be open,” Noyes said. “Bill jokes that the only pool that will be open next year is the 50-meter pool at the water parks, and that would be more than double the lengths because that’s about 55 yards when you’re looking at 50 meters.”

It’s a tradition that started on his 46th birthday. He didn’t have a workout planned at the time, but has had one every year on his birthday since.

“I was sitting on the edge of the pool and I said, ‘Oh, what’ll I do today? Nothing, I’m going to do 46 lengths.’ I did that and then the kids on the team heard that I did that and it became a tradition,” Powell said. “ ... I do it every year and it really doesn’t get harder every year, it’s just one more length.”

Powell credits swimming for keeping him in shape, and encourages everyone to do a birthday swim of the same nature. He started swimming as an 8-year-old – hey says he “couldn’t swim a lick” before that – when his father bought a house on an island in his home state of Michigan. It was a one-room house when his family moved, and he and his siblings slept in a screened-in porch, before his father added on to it and installed indoor plumbing.

“There was no bridge to it or anything. The only way to get to my house was either to swim or by boat. We lived out on that island and we went across the lake to the grocery store. The public beach was across the lake and I preferred swimming at the public beach instead of swimming at my own house because there were girls at the public beach. I would swim across the lake to go swimming and then go home,” Powell said. “It was kind of natural to go out to the swimming team when I got to high school and the rest is history I guess. I swam four years of high school and four years of college and then spent the next 60 years coaching it.”

“... It was an adventure and that’s where I got started swimming. I wouldn’t trade it for anything.”

After swimming collegiately at Western Michigan, he coached at St. Joseph High School in Michigan, before moving to Bowling Green and becoming WKU’s swim coach in 1965. He amassed 425 wins at WKU, a mark that, at the time of his retirement, was the second-highest total in NCAA Division I men’s swimming.

On Saturday, however, the only number that mattered was 83. Although it was over a month from the birthday, Powell was pleased to finally get his annual birthday swim completed.