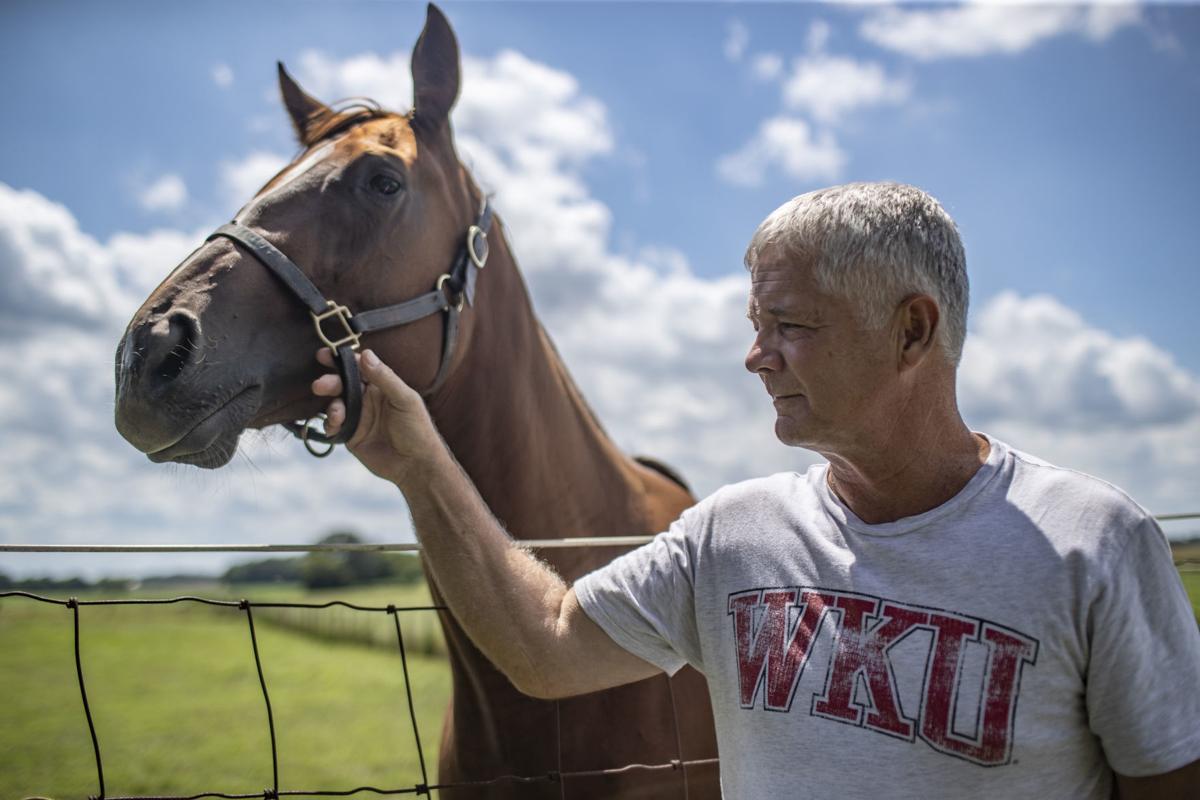 Mike Harris stands with a filly named Sweet Baby B on Thursday at Westwind Farms. The Westwind Farms-born filly My Juliet, winner of an Eclipse Award as the champion sprinter in 1976, was inducted Aug. 2 into the National Museum of Racing and Hall of Fame in Saratoga Springs, N.Y. 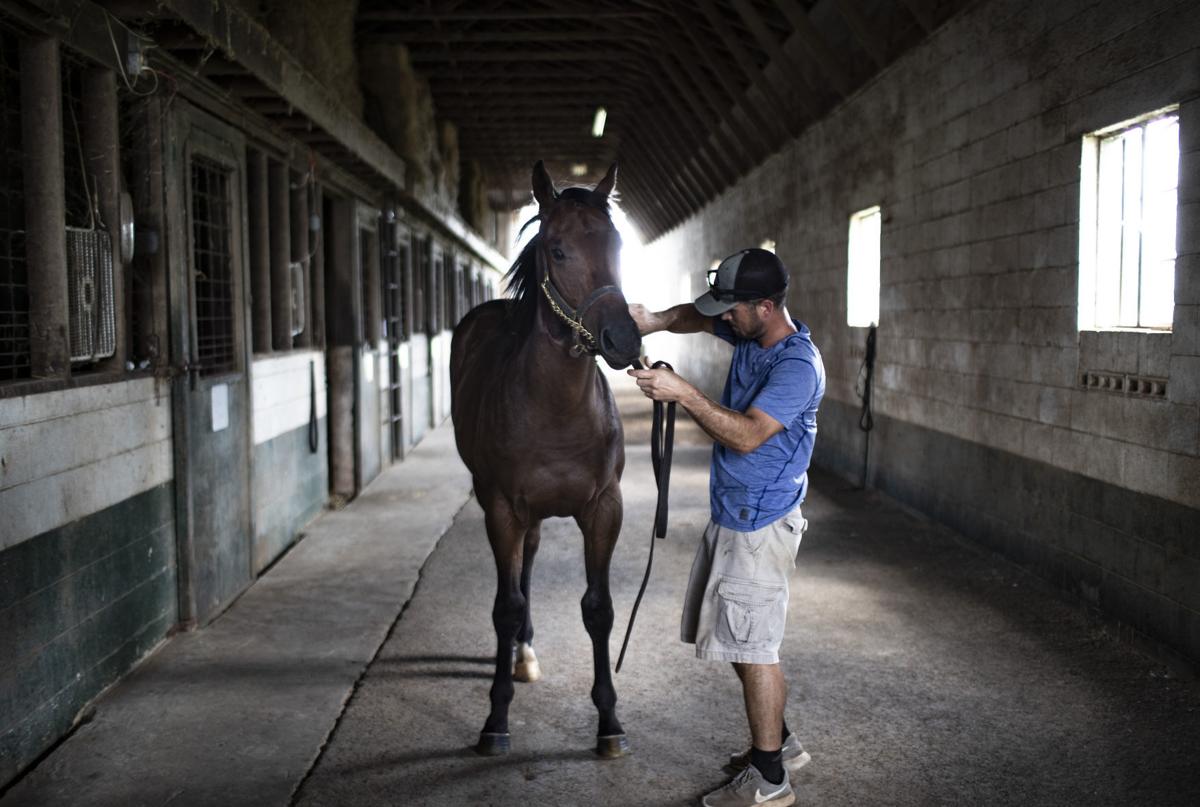 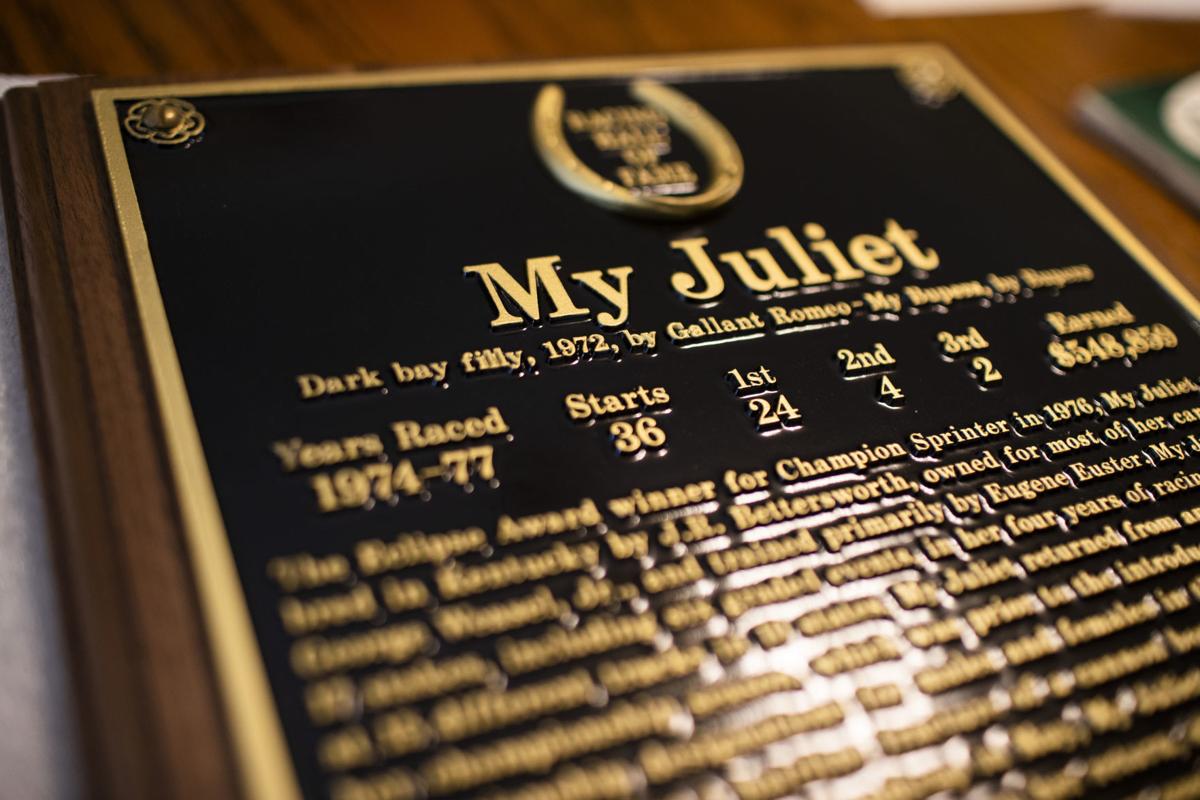 A plaque matching My Juliet’s plaque displayed at the National Museum of Racing and Hall is shown at Westwind Farms. 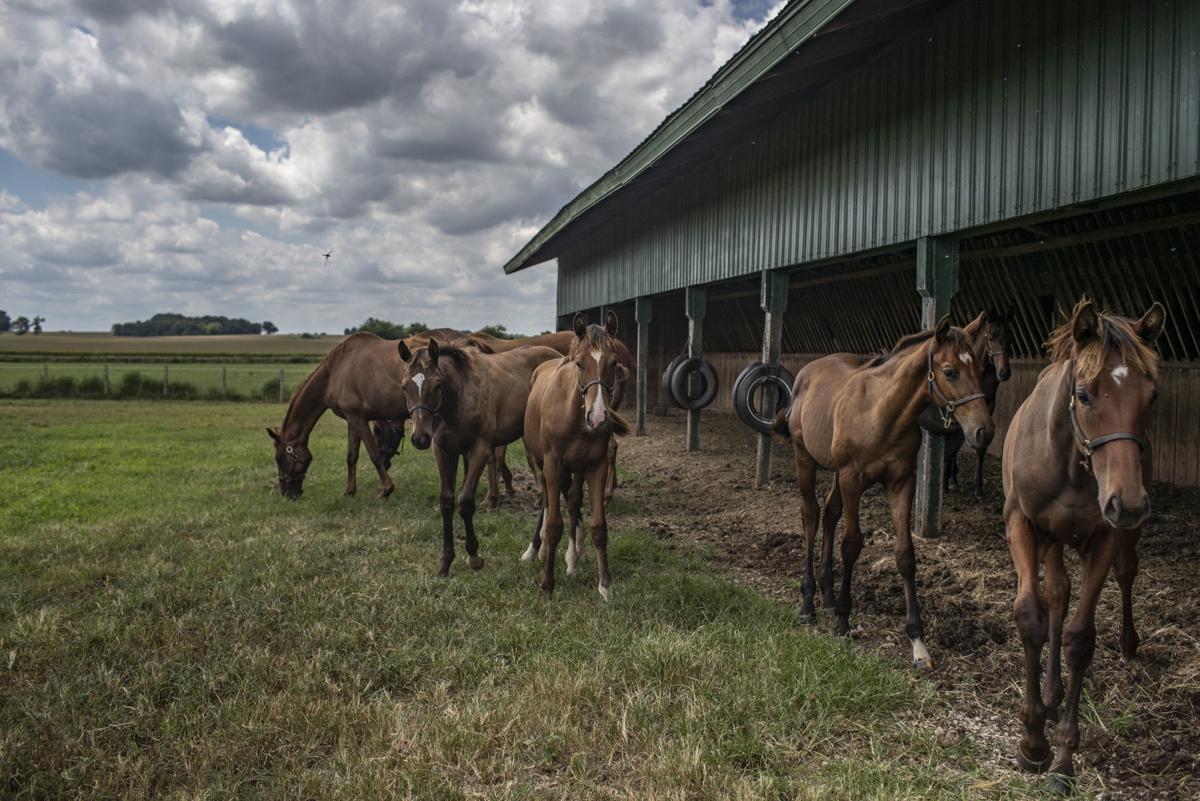 Mike Harris stands with a filly named Sweet Baby B on Thursday at Westwind Farms. The Westwind Farms-born filly My Juliet, winner of an Eclipse Award as the champion sprinter in 1976, was inducted Aug. 2 into the National Museum of Racing and Hall of Fame in Saratoga Springs, N.Y.

A plaque matching My Juliet’s plaque displayed at the National Museum of Racing and Hall is shown at Westwind Farms.

A once-in-a-lifetime filly born in Warren County has been immortalized by the National Museum of Racing and Hall of Fame.

My Juliet, foaled by Bowling Green’s Westwind Farms in 1972 and the Eclipse Award winner as the champion sprinter in 1976, was among this year’s inductees during a ceremony Aug. 2 at the museum in Saratoga Springs, N.Y.

Mike Harris, who along with his brothers Brent and Kevin and his two sons – Justin and Tyler – still operate the horse farm established by his grandfather J.R. Bettersworth, was among a small contingent from the farm who made the trip to upstate New York for the ceremony to honor My Juliet’s spectacular racing career that included winning a head-to-head matchup with Kentucky Derby and Belmont Stakes winner Bold Forbes.

“She was a special filly, for sure,” Harris said.

Bettersworth purchased My Juliet’s broodmare, My Bupers, in foal with the future superstar for a modest $7,000 at the Keeneland November sale. The dark bay foal was named, then sent back to Keeneland as a yearling for sale. When she didn’t bring back Bettersworth’s $7,500 reserve, My Juliet was sent out West to Colorado to trainer R.R. Ladd. She finished second in her 2-year-old debut at Fonner Park in Grand Island, Neb.

Still owned by Bettersworth, My Juliet scored a six-length maiden victory at Hawthorne Race Course in Illinois, then scored a pair of allowance wins. Bettersworth sold her then to George Weasel for $50,000, and the filly continued to dazzle.

My Juliet finished her 2-year-old campaign with four wins in five starts, then followed up by winning nine times in 15 starts as a 3-year-old. Among those victories were the Black-Eyed Susan Stakes (Grade 3) at Pimlico in Baltimore, the Test Stakes (Grade 3) at Saratoga and the Cotillion Stakes (Grade 2) at Keystone (now Parx) in Pennsylvania.

My Juliet’s racing career nearly ended the following year, when she suffered a fractured left foreleg during her win in the Vagrancy Handicap (Grade 3) at Belmont. Surgery and five months of recovery followed, but Weasel and trainer Eugene Euster deemed her ready for a trial in October. With regular jockey Jorge Velasquez already booked and unable to breeze her, Philadelphia-based jockey Tony Black got the call.

“She was the most amazing horse,” Black said during the Hall of Fame induction ceremony. “The first race back (an allowance race) she won in a gallop. She never had to break a sweat. The thing that stood out about My Juliet is that she was not intimidated by gender.”

My Juliet confirmed that assessment beyond question at the 1976 Vosburgh Handicap (Grade 2) held in October at Aqueduct Racetrack in New York. Sent off as a 9-1 choice against a field that included 1-2 favorite Bold Forbes – winner of the 1975 Kentucky Derby and Belmont Stakes – My Juliet burst to the front and stayed there for the duration of the seven-furlong race as she drew away for a stunning two-length victory.

“She just went to the front and (held) the position,” Harris said. “Bold Forbes was trying to get to her but he never could get to her. And coming down the stretch, she was actually pulling away from him.”

That win in the Vosburgh cemented My Juliet’s credentials as the American Champion Sprinter in 1976 – male or female – but she still wasn’t done on the track.

After winning six times in eight starts as a 4-year-old in 1976, My Juliet tallied five more wins the following year – including the Michigan Mile and One Eighth Handicap (Grade 2) – before she was retired from the track.

My Juliet was equally accomplished as a broodmare. Her first foal – ironically, by Bold Forbes – was a stakes winner. And two colts out of My Juliet by legendary Triple Crown contender Alydar were Grade 1 winners.

While My Juliet’s racing career largely took place after Bettersworth sold her, Westwind Farms reaped a huge benefit from her success. My Juliet’s broodmare, My Bupers, was suddenly a huge commodity.

“John Gaines and Don Johnson of Crescent Farm flew down in a helicopter and landed beside grandfather’s house and bought (My Bupers),” Harris said. “He took the money and bought an adjoining farm.

That sale, for $350,000, added an additional 250 acres that still make up a sizable portion of Westwind Farms.

It was a tremendous return on a $7,000 investment, but Johnson did even better when he later sold a colt out of My Bupers and sired by Northern Dancer for a then-record $10.2 million. That colt never ran a race.

“We sold her right after she had her third foal,” Harris said of My Juliet’s broodmare. “The two foals she had after My Juliet I think were both colts, and we sold them. We never could afford anything out of her after that.”

Westwind Farms has prospered over the years and still maintains a string of 25 broodmares. The operation started by J.R. Bettersworth has produced several stakes winners since My Juliet.

“We’ve got a colt right now that won a big race at Arlington Million Day (Aug. 10) and one (on) the undercard was a Grade 1 stakes, a mile on the turf, called the Secretariat Stakes,” Harris said. “And we had a colt, he was 2-for-2 going into the stakes. He went off second-choice – they knew he was pretty good, and he won impressively. His name is Valid Point. You’ll be hearing more from him.”

“Probably a once in a lifetime horse, especially for a small breeder like us,” Harris said.{&end}

My Juliet, a dark bay filly bred at Westwind Farms in Bowling Green, was recently inducted into the 2019 National Museum of Racing and Hall of Fame.