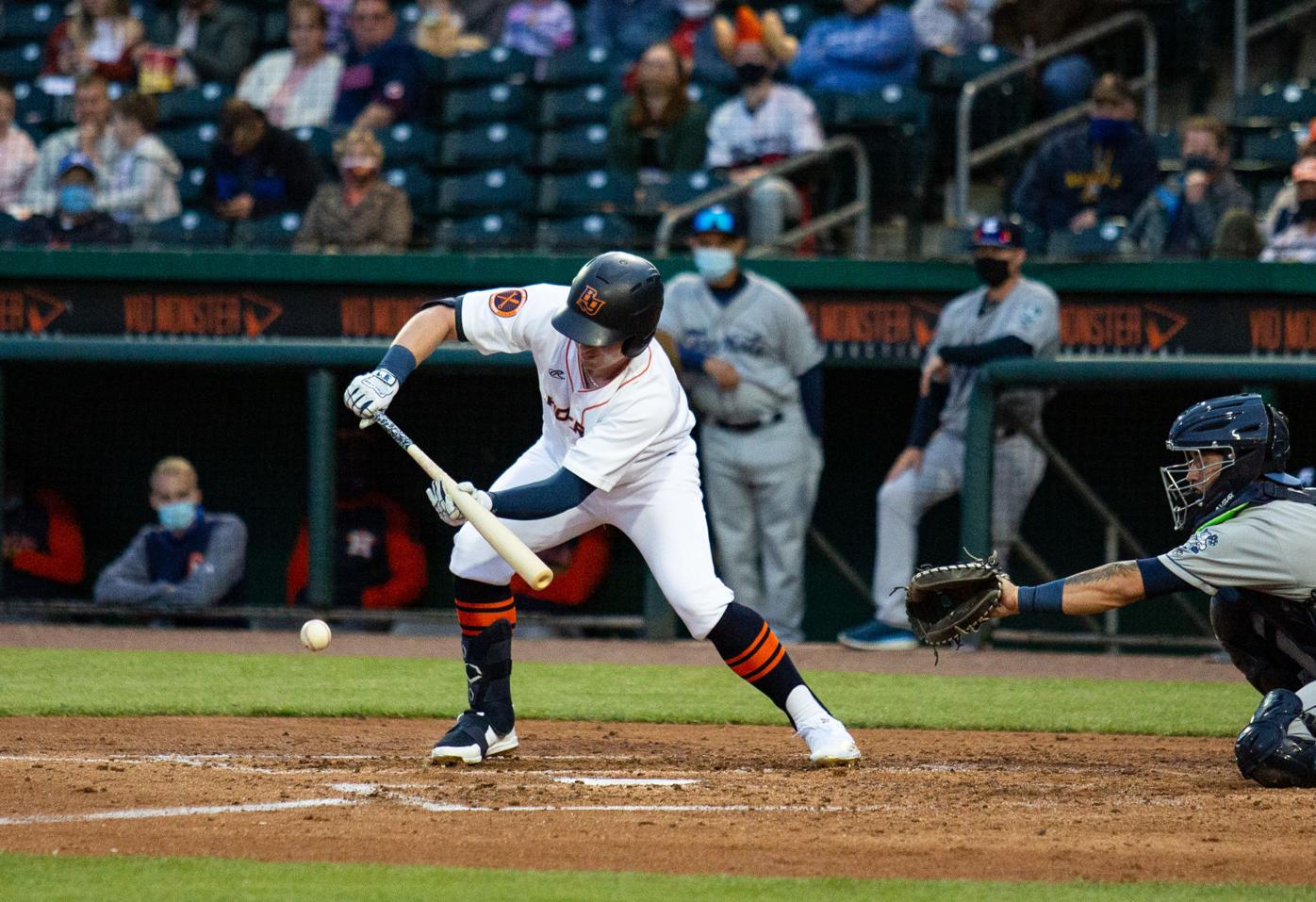 Hot Rods center fielder Grant Witherspoon lays down a bunt during Bowling Green’s win against the Asheville Tourists on May 11 at Bowling Green Ballpark. 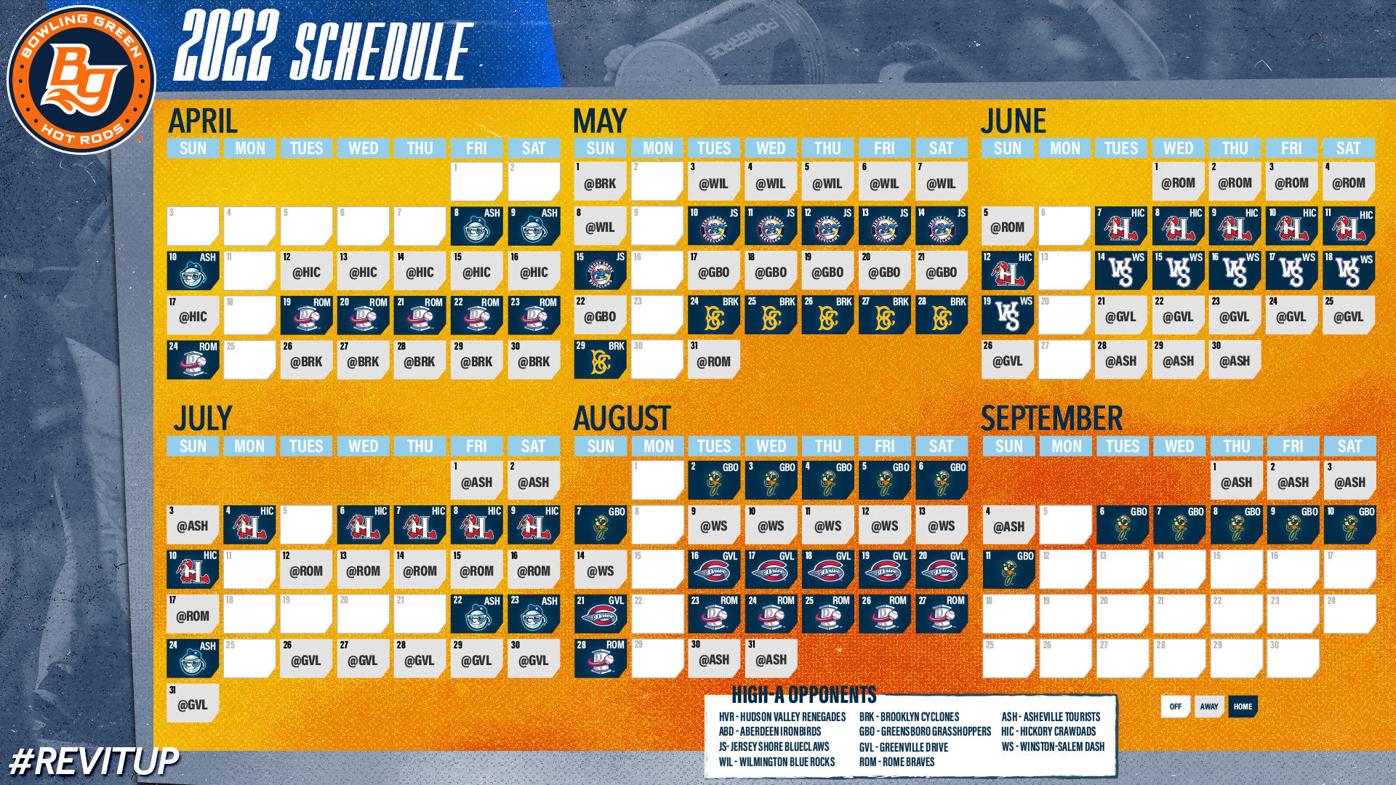 Hot Rods center fielder Grant Witherspoon lays down a bunt during Bowling Green’s win against the Asheville Tourists on May 11 at Bowling Green Ballpark.

The Bowling Green Hot Rods, High-A affiliate of the Tampa Bay Rays, have announced their High-A East schedule for the 2022 season.

The season begins at Bowling Green Ballpark when the Hot Rods take on the Asheville Tourists (Houston Astros) on April 8. The team will play a three-game series April 8-10 before heading out on their first road trip, a six-game series, in Hickory, N.C., against the Hickory Crawdads (Texas Rangers).

The team will be back at home to renew their rivalry against the Rome Braves (Atlanta Braves) April 19-24, a season after the two teams played 36 times (they play 24 times in 2022). April finishes with the club’s first trip to Brooklyn, taking on the Cyclones (New York Mets) for the first time in franchise history.

In May, the Hot Rods host two homestands against new opponents with the Jersey Shore BlueClaws (Philadelphia Phillies) on May 10-15 and Brooklyn coming to town May 24-29. The Hot Rods begin the month on the road in Wilmington, Del., as part of the second leg of their trip to Brooklyn. They also make a trip to Greensboro, N.C., in the month to play the Greensboro Grasshoppers (Pittsburgh Pirates) May 17-22.

June features back-to-back homestands from June 7-12 against Hickory and June 14-19 against the Winston-Salem Dash (Chicago White Sox) with trips to Rome (May 31-June 5), the Greenville Drive (Boston Red Sox, June 21-26) and end the month on the road against Asheville.

July begins in Asheville before the Hot Rods have a special Monday game, the only one of the season, on July 4 to open a six-game series against Hickory. Bowling Green goes back on the road for six games in Rome July 12-17 before a four-game break July 18-21.

Following the off time, Asheville is back in town for a three-game series July 22-24 prior to the Hot Rods hitting the road again for six games with Greenville.

August starts off with another series against Greensboro, this time at Bowling Green Ballpark Aug. 2-7. Following the Monday off-day The Hot Rods play their lone August road series in Winston-Salem against the Dash Aug. 9-14. BG returns home Aug. 16-28 with two six-game series against the Greenville Drive and Rome Braves.

The Hot Rods start a road series to end August against Asheville (Aug. 30-Sept. 4) but end the season at home again with six games against the Greensboro Grasshoppers, Sept. 6-11.

Minor League Baseball will release a potential playoff format and schedule at a later date.

The scheduled game between the host Hot Rods (75-36) and the Wilmington Blue Rocks (52-61) set for Wednesday was canceled due to rain. The two teams will not make up the contest.

Thursday’s game will begin with a 6:35 p.m. first pitch as scheduled.

The Hot Rods have already clinched a playoff berth and home-field advantage throughout the championship series, while their opponent has yet to be determined. Wednesday marks the second straight week the club had a game affected due to rain on a Wednesday after last week’s game in Winston-Salem was postponed and made up on that Thursday.

Bowling Green finishes their Wednesday schedule 13-1, with the lone hump-day loss coming on the road, making for a perfect record of 9-0 at home. The Hot Rods pitching staff posted a 3.31 ERA while the hitters had a team batting average of .252 with 33 home runs.

Playoff tickets are on sale, with the Hot Rods hosting game three of the High-A East Championship Series on Sept. 24. Scheduled games on Sept. 25 and Sept. 26 are scheduled “as necessary” with tickets on sale for all three games. Fans can get their tickets by visiting www.bghotrods.com, calling 270-901-2121, or visiting the box office at Bowling Green Ballpark.{&end}