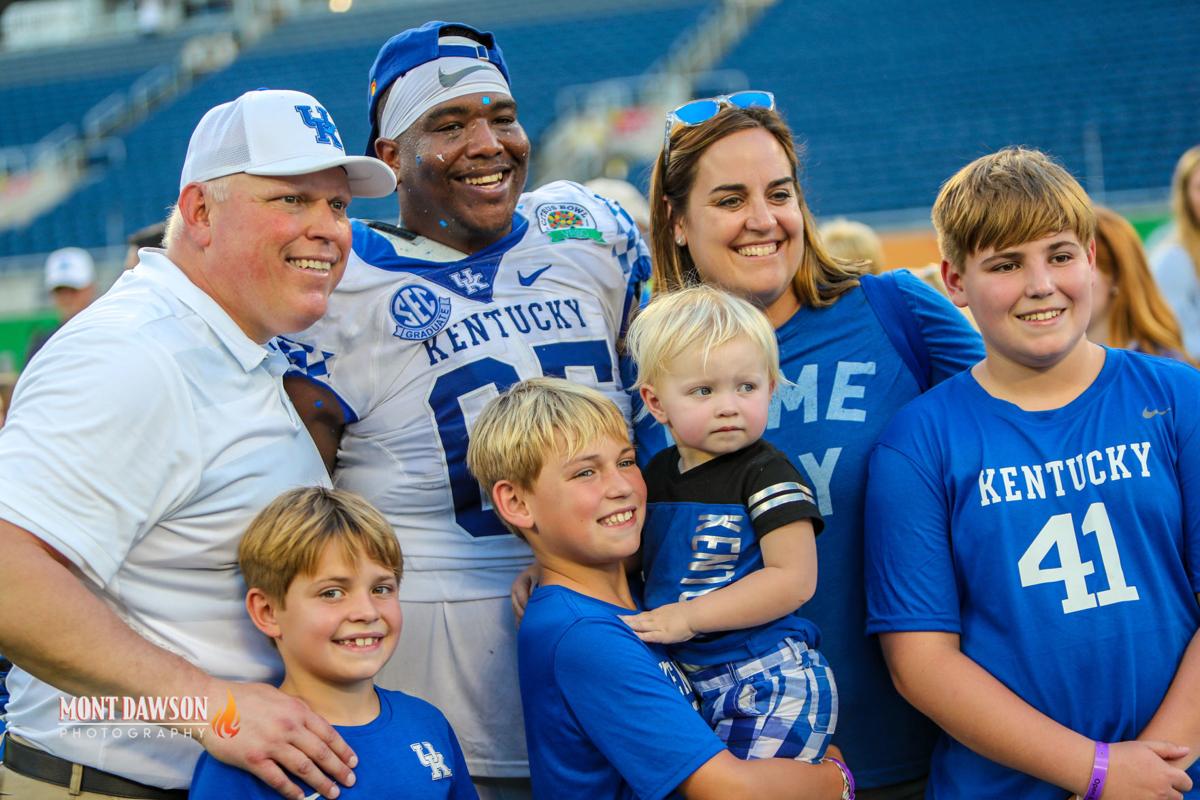 Kentucky assistant coach John Schlarman's battle with cancer the last year has not been easy for anyone. His wife has tried to keep things as “normal” as possible for everyone, including celebrating with lineman Bunchy Stallings after the Citrus Bowl, despite her constant worries. (Mont Dawson Photo) 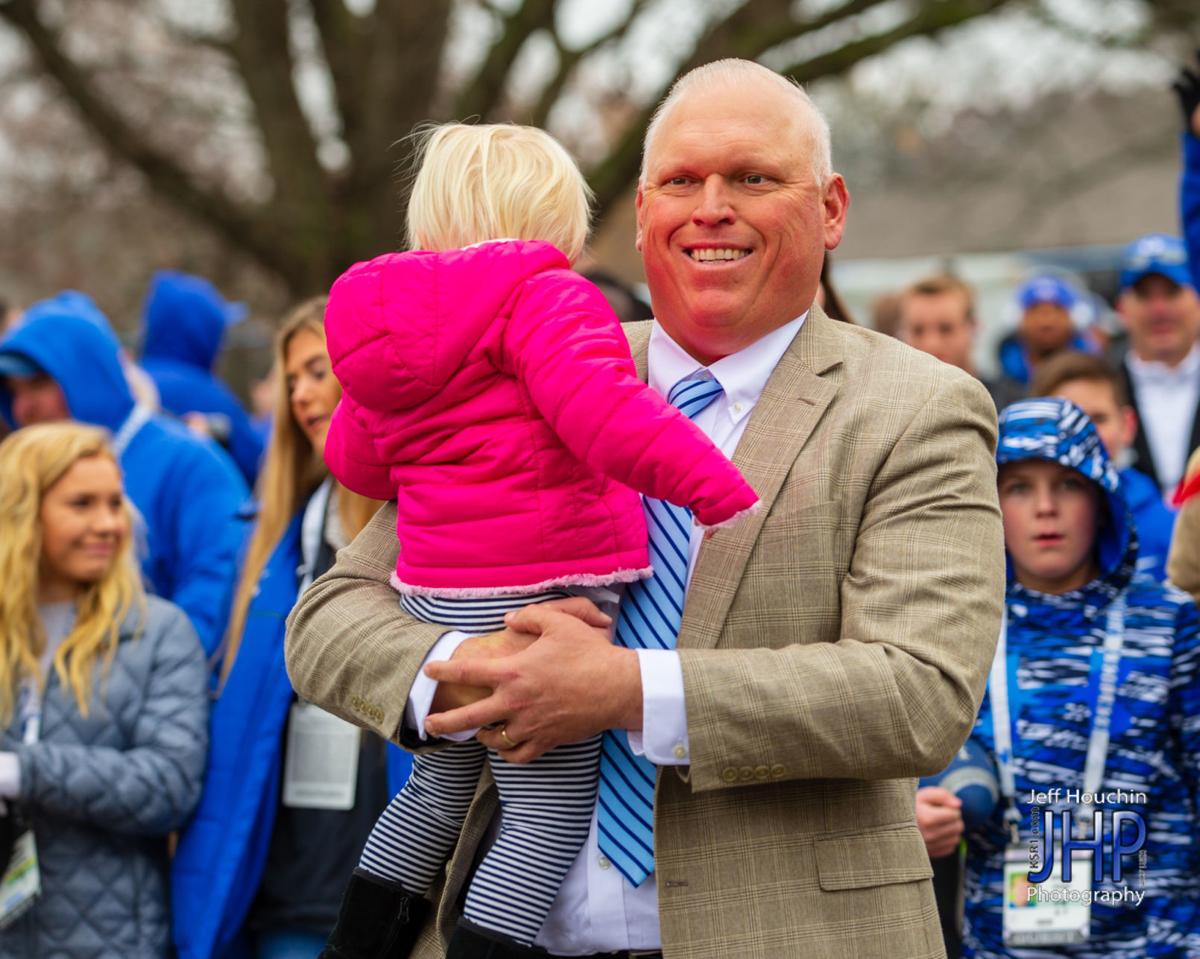 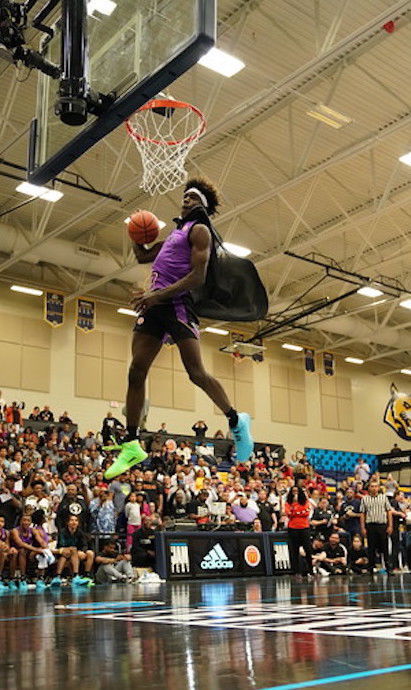 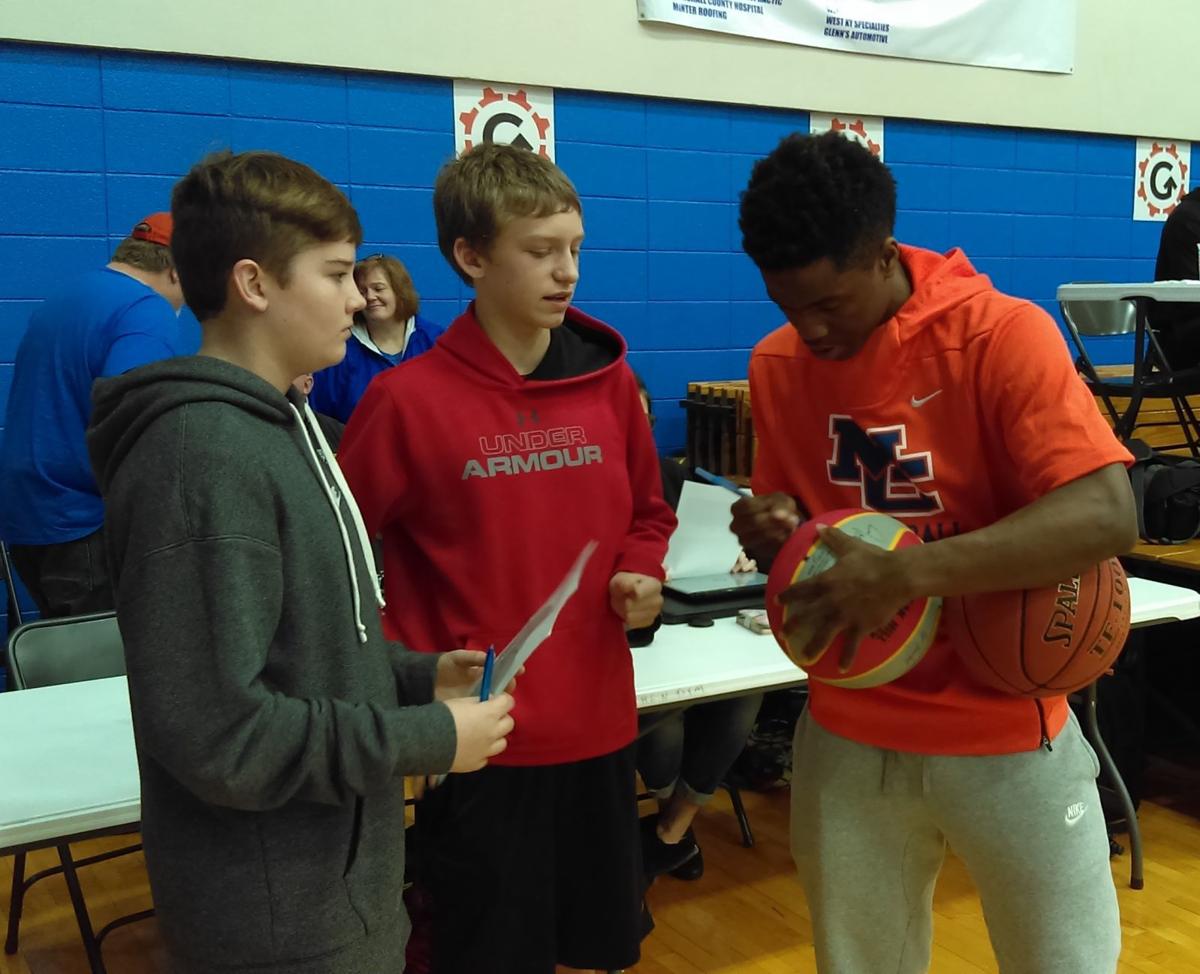 Kentucky assistant coach John Schlarman's battle with cancer the last year has not been easy for anyone. His wife has tried to keep things as “normal” as possible for everyone, including celebrating with lineman Bunchy Stallings after the Citrus Bowl, despite her constant worries. (Mont Dawson Photo)

Ask John Schlarman what his life might be like if he wasn’t coaching and he’ll tell you he doesn’t know because coaching football is all the Kentucky offensive line coach has ever done.

His wife, LeeAnne Federspiel Schlarman, understands that well because she feels the same about being a coach’s wife.

“I can’t imagine doing anything else. John was a GA (graduate assistant at UK) and then got the job as a head high school coach in northern Kentucky and we really enjoyed that,” LeeAnne Schlarman said. “It has just been exciting from the start. The kids love it. It has just been a good ride we have enjoyed.”

They were students at UK when they met. John was a four-year starter on the offensive line at UK from 1994-97 (he was all-SEC his senior season) after an all-state career at Highlands High School. LeeAnne was in a UK sorority with a “bunch of girls” from Highlands and the two had the same circle of friends.

“His senior year his roommate started dating my roommate and another couple and us all went out one night, but John and I were even in separate cars. Then we started talking and hit it off. It just worked out for us,” she said.

It’s worked out so well that the couple have four children – sons Joseph, Benjamin and Matthew, and a daughter, Evelyn. LeeAnne’s father, Joe Federspiel, was a star football player at UK who played 10 years in the NFL and then became a Southeastern Conference football official.

She said her parents had no problems with her dating a football player.

“We have family dinners every Sunday night with my aunt and uncle. I remember going to my uncle’s house with John for the first time. Of course once you meet John, they liked him right away. It was easy. No problem at all with anybody,” she laughed.

Still, nothing prepared LeeAnne, her husband or anyone in the family for what happened last year after the UK assistant coach was diagnosed with cancer. He had to undergo chemotherapy treatments and made trips to Houston for treatments – and still does. He did not miss a game and seldom missed a practice. John Schlarman said before this season started he was feeling better and new medicine was making it easier and more convenient for him to continue his fight with cancer.

For his wife, it has been an emotional last year or so.

“It has been a terrible, awful year,” she said during our interview that was exactly a year after they found out he had cancer. “He has just been so strong through it all. I would go with him and sit five hours for chemo and then he would go straight to practice.

“He has been so strong. It’s not normal, but he marches on like it is. I drive him crazy because I ask him every five seconds if he is OK, is he feeling good, can I do anything. If he scratches, I ask him why he did that. If his foot hurts, what is that. I just worry.

“He will do great during the day, but in the evenings he definitely crashes and needs to sit down and rest. He hasn’t really gotten sick. He is mostly just tired.”

Going to chemotherapy treatments with a loved one is not easy emotionally for anyone. LeeAnne can vouch for that.

“The first ones I pretty much cried the whole time. After that, I was like, ‘This is John’s battle and he just wants to be normal.’ I had to remember that,” she said.

During chemo treatments her husband would watch game film or maybe talk on the phone to offensive coordinator Eddie Gran.

“At first he will take the Benadryl which makes him sleep, but then he will wake up and will start breaking down film. I think it helps him go through this to do something like that,” LeeAnne said. “I try to keep it as normal as I can. I get lunch and come back and try to keep him feeling normal. It’s not, though, and it is hard.

“Now he is traveling to Houston every other week (for treatment). That is going to be a challenge during the season. He will probably leave Friday afternoons and fly directly then to where the game is, so he shouldn’t miss too much.”

She never quits worrying, but knows the more normal she can keep the home life the better it is for her husband when he’s home.

“He doesn’t want to be known for his (illness) and doesn’t like the attention, but he is battling and doing a great job. So far everything has gone the right direction and he is doing well,” she said.

One plus was UK’s magical 2018 season that ended with a Citrus Bowl victory over Penn State to give UK its first 10-win season since 1977.

“We were going through some very hard times here and I can’t imagine having the stress of the losses and the pressure of all of that combined with trying to beat this monster he is dealing with right now,” she said. “I wish he would scream or bang his head … I really do … but he is always in great mind.

“I cry enough for both of us. He just … sorry (for the tears) … he has his moments but he is so positive and keeps me so positive, too. He is amazing through it all.”

She’ll never forget the way coaches, players and UK fans rallied not only around her husband but also Josh Paschal, a defensive player who was diagnosed with skin cancer about a year ago, also.

“It’s been an awful year, but it had some positives because so many people had a positive attitude and cared so much for both of them,” LeeAnne said.

The couple’s three boys know more about what is going on with their father than their youngster sister. Fortunately, he hasn’t been sick at home for them to see.

“He has not been in bed for days. That’s not him. He will go out and throw the football, he took Ben fishing. It hasn’t really slowed our life down too much at all. He is tired when he gets home, but still in a good mood and he keeps on rolling for the kids,” she said.

Most of us couldn’t tell the former UK offensive lineman was even battling cancer if we did not know.

“That’s what everybody says. Most think it is in remission because he looks so good and I just wish that was true,” LeeAnne said.

She laughs recalling how they were told a steroid he got during chemo could either make him drowsy or might “really rev him up” and put him in a good mood.

“Fortunately for John, it did the revved up thing. We would leave chemo with him being all jacked up almost every Monday,” she said. “Tuesday was still that way some, but then Wednesday he would come home and crash early and then be ready to go Thursday for game day (preparation).

“With this new medicine, we are still trying to figure it out. It doesn’t have the nauseous feeling, Just icky bones, joints and a tired feeling. But John never gives in. That’s not him. He doesn’t want anyone feeling sorry for him and he just wants to do his job because he cares so much. I’m the worrier. Always have been, always will be. He’s an amazing man and such a strong person. This has not been nearly as easy as he wants you to think or makes it look.”

Even though he does not yet have a scholarship offer from Kentucky, Marshall County junior point guard Zion Harmon – ranked the 25th best player in the 2021 recruiting class by ESPN – has the Wildcats among his final seven college choices.

Others in his top seven are Kansas, Louisville, LSU, Seton Hall, Western Kentucky and Murray State. Western Kentucky was the first school to seriously recruit him as he helped Bowling Green win a state title his eighth-grade year and Western coach Rick Stansbury’s son was on that team. Kansas coach Bill Self and the Jayhawks have been heavily involved with him since his freshman year at Adair County when he led the state in scoring at 32.7 points per game along 7.8 assists and 3.4 rebounds per game.

He also has offers from Auburn, Tennessee, Vanderbilt and others.

“We are still waiting on UK,” Mike Harmon, Zion’s father, said last week. “They are supposed to come to the school and check him out. I think still in his heart he really likes UK a lot.

“It is important to him for all the major schools in Kentucky – Murray, Western, Louisville and Kentucky – to be on his list but obviously Louisville and UK are at the top of the list. He knows he fits into that dribble-drive system (at UK). He has studied (coach John) Calipari and Kentucky and feels he could fit with his style of basketball very, very well.”

Harmon transferred to Marshall County last season but was ruled ineligible by the Kentucky High School Athletic Association. He stayed in school and had a big summer playing travel basketball to hopefully set the tone for his return to high school play at Marshall this season.

He averaged 14.3 points, 6.2 assists and 3.6 rebounds per game for his Boo Williams team in the Nike EYBL and helped the team reach the Peach Jam semifinals. At the NBA Top 100 Camp, he averaged 11 points and 3.4 assists per game and also played well at the Pangos All-American Camp. Next month, he will attend the USA Basketball minicamp.

“He had arguably one of the better summers of any kid out there. His Boo Williams team was nowhere near as strong as it was his eighth-grade year but they got to the Peach Jam Final Four,” Mike Harmon said. “Every opportunity he had this summer, he showed out pretty well.

“After having to sit out last year (at Marshall County), he knew that hurt him in the rankings because he was not playing. ESPN and writers were following other kids that were playing.

“He took it as a challenge to show where he was and I think he did a great job of that.”

Zion’s father expects him to make his college choice in the spring, probably before the Nike EYBL starts.

Quote of the Week: “We are all excited for the game and have been for a while. I know our crowd is going to be amazing. It will be exciting to see our fan base ready to go and you know everybody is going to want to win for (injured quarterback) Terry (Wilson),” UK receiver Ahmad Wagner, on Saturday’s game against Florida.