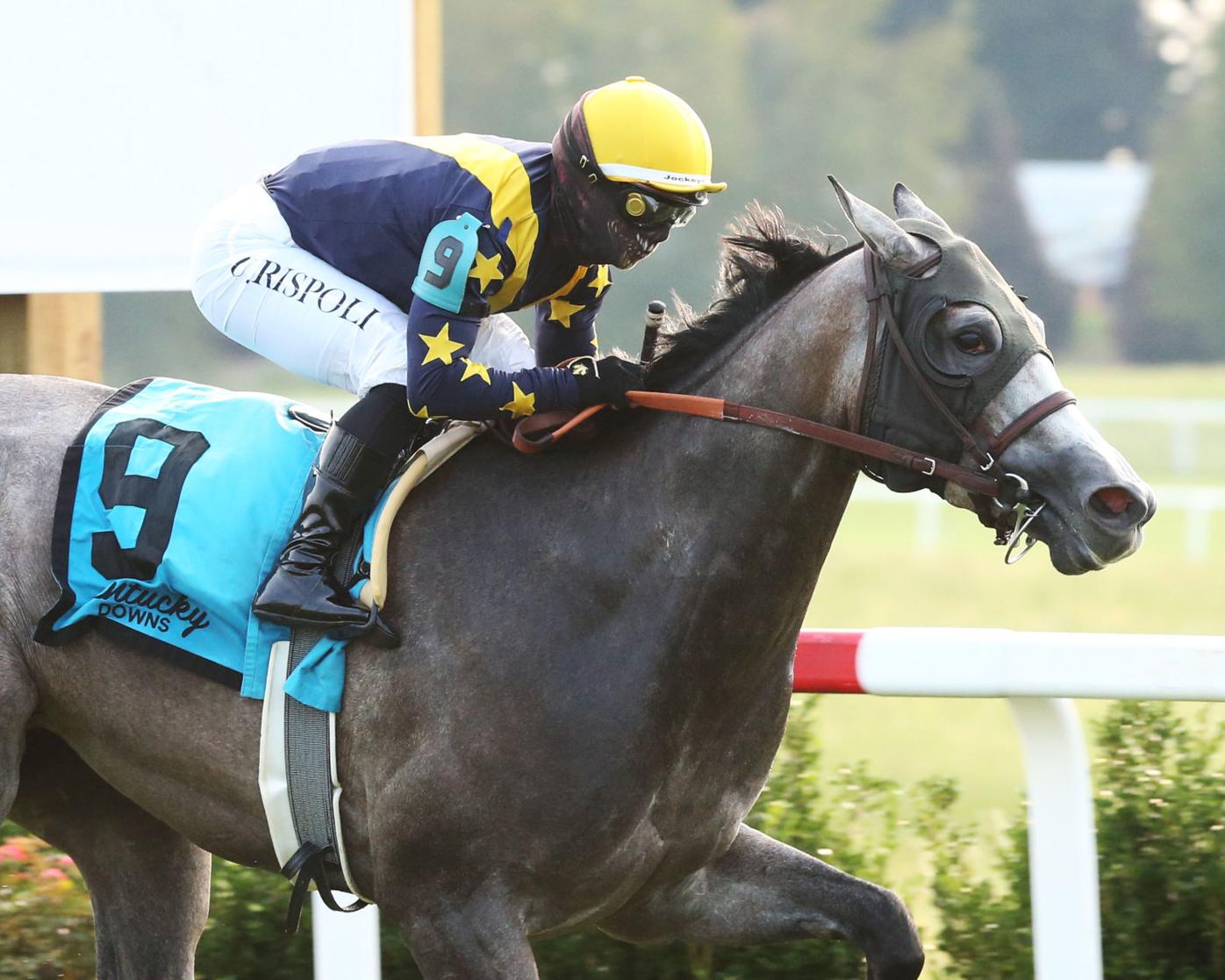 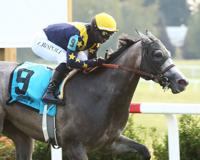 Lighthouse, with jockey Umberto Rispoli aboard, races to the victory in Tuesday’s $400,000 Music City Stakes at Kentucky Downs in Franklin. 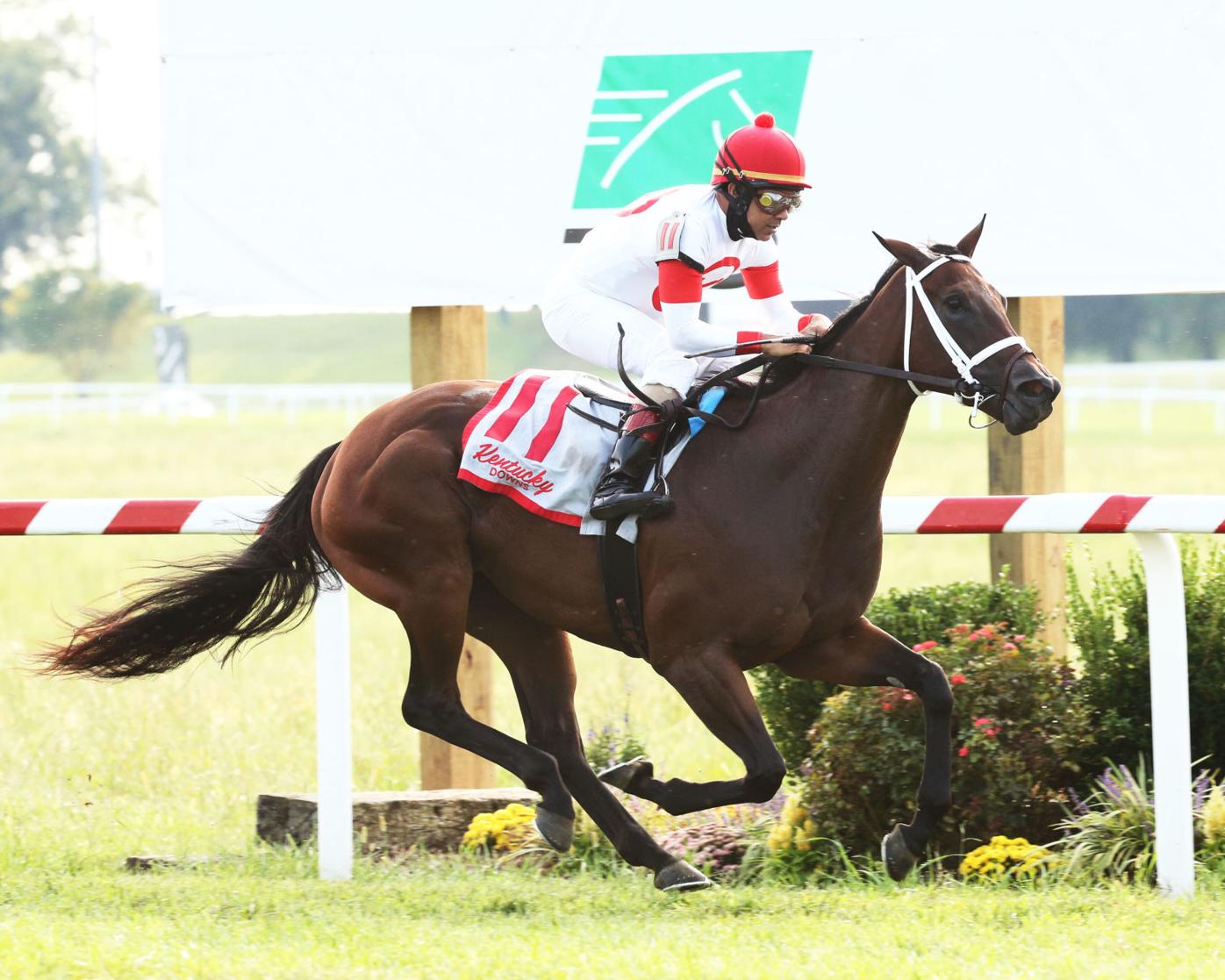 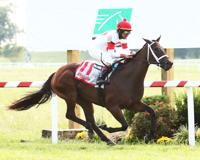 Emro, with jockey Shaun Bridgmohan aboard, nears the finish line en route to winning the $400,000 Untapable Stakes on Tuesday at Kentucky Downs in Franklin.

Lighthouse, with jockey Umberto Rispoli aboard, races to the victory in Tuesday’s $400,000 Music City Stakes at Kentucky Downs in Franklin.

Emro, with jockey Shaun Bridgmohan aboard, nears the finish line en route to winning the $400,000 Untapable Stakes on Tuesday at Kentucky Downs in Franklin.

LNJ Foxwoods’ Lighthouse claimed the win in the $400,000 Music City Stakes for 3-year-old fillies Tuesday in the RUNHAPPY Meet at Franklin’s Kentucky Downs, becoming the first runner to win at the current meet after shipping in from California.

The 1½-length victory over Miss J McKay sent burgeoning superstar jockey Umberto Rispoli home with a winner out of only two mounts after spending most of a week in town.

Evil Lyn and Bredenbury (IRE) led through the first quarter-mile in a swift 21.87 seconds while Rispoli kept Lighthouse in striking distance, just 1½ lengths off the pace.

With a half-mile booked in 45.27 seconds, Lighthouse was about to roll by Evil Lyn, and the eventual winner led by a quickly-widening three lengths with a furlong remaining. Lighthouse easily held safe Miss J McKay, who was fourth by two lengths during the first four furlongs and gamely stayed on to finish 1½ lengths behind the winner. The time for 6½ furlongs was 1:14.99 over a course rated good.

“We were surprised because there wasn’t much speed in the race,” Rispoli said. “When I looked around and nobody wants to go, I say, ‘Well, I’ll take it.’ I knew she was good enough to win from the front… I decided to run away, and she ran very good to the line. So I’m very pleased and happy with her.

“I’ve been riding around the world, and even in Italy we have a few up and down tracks. Not like this. But in England and France too. But I love the grass, so I can adapt myself anywhere, no matter what.”

Lighthouse, who had previously run six times exclusively at Santa Anita and Del Mar, has failed to hit the board only once in seven starts. With her victory at Kentucky Downs, she has three wins, two seconds and a third combined with earnings of $335,171 after today’s payday of $233,120. Available money in the Music City was $360,385.

Even-money favorite Kimari was another length-and-a-quarter back in third, and Outburst was fourth, an additional 2 3/4 lengths back.

Bridgmohan guides Emro to 2-for-2 in $400K Untapable

Kueber Racing’s Emro, who won her debut at Ellis Park, ran her record to 2-for-2 in taking the $400,000 Untapable Stakes for 2-year-old fillies in dominant fashion by 2 3/4 lengths over Taylor’s Tourist after a strong stretch run from off the pace under Shaun Bridgmohan.

“I was very proud of her,” winning trainer Brad Cox said. “She’s been training well, obviously. She got it done first time out, and we’ve been pointing for this since she broke her maiden. Very, very happy with the performance and Shaun did a good job.”

After breaking cleanly from the far outside post 11 in the 6 1/2-furlong race, Emro was reserved in sixth position by Bridgmohan down the hill, 7 1/2 lengths from the front, into the sweeping turn. As the bunched field turned for home, Emro was six wide and 4 1/2 lengths off the pace but made short work of her competition from there. She narrowly led with an eighth-mile remaining and prevailed by 2 3/4 lengths going away over a course rated good.

Taylor’s Tourist, who was 10th and last at the first call under Florent Geroux, proceeded to pass every horse in the field but one. Behind her at the finish in third, beaten 5 3/4 lengths, was early pacesetter Fouzia, who was a neck better than Mad Maddy in fourth. Initial fractions were a torrid 21.48 seconds for the first quarter-mile and 45.15 seconds for four furlongs.

Augustin Stable’s Theodora B. held off a late charge by favored Mrs. Sippy to win the $500,000 TVG Stakes for fillies and mares by three-quarters of length while never seriously threatened by the closing favorite Mrs. Sippy over a course rated good.

“She’s a really incredible filly, a little on the quirky side,” said Fenella O’Flynn, who serves as an assistant trainer, van driver and whatever needs done for Maryland-based trainer Michael Dickinson. “But she’s a really, really nice filly. She trained lovely here the last couple of days. We had to stay the extra couple of days of course, but it was better for her. We traveled here and we’ll travel again tomorrow to Tapeta Farm.”

Guided by Irad Ortiz, Jr. while well off the rail, 3-1 second betting choice Theodora B. set the pace with slow fractions of 26.23 seconds for the first quarter-mile, 51.32 seconds for the half, and 1:15.85 for six furlongs. Mrs. Sippy, sent off as the 9-10 favorite under Joel Rosario, bided her time in fourth, fifth and then sixth of six starters while around four lengths back heading down the hill at the top of the backstretch.

Turning for home, Theodora B. had registered a mile in 1:39.78 and was still in front with Mrs. Sippy fifth by 2 1/2 lengths. Theodora B. dug in with gas still in the tank to hit the finish line first.

Delta’s Kingdom, the longest-odds starter in the field at 15-1, was second until upper stretch and checked in third, another two lengths back. She was followed by English Affair, Siberian Iris and Over Thinking, who was unable to overcome a slow start. The winning time for 1 5/16 mile was 2:09.72 on a course rated good.

Kentucky Downs moved its Sunday card to Tuesday after heavy rain pelted the area over the weekend. All the same, horseplayers responded enthusiastically with a total of $8,950,973 wagered on the 11-race card, fifth-highest in track history.

The six-date meet closes Wednesday’s with 10 races, headlined by the $500,000, Grade 3 Franklin-Simpson Stakes for 3-year-old sprinters.{&end}