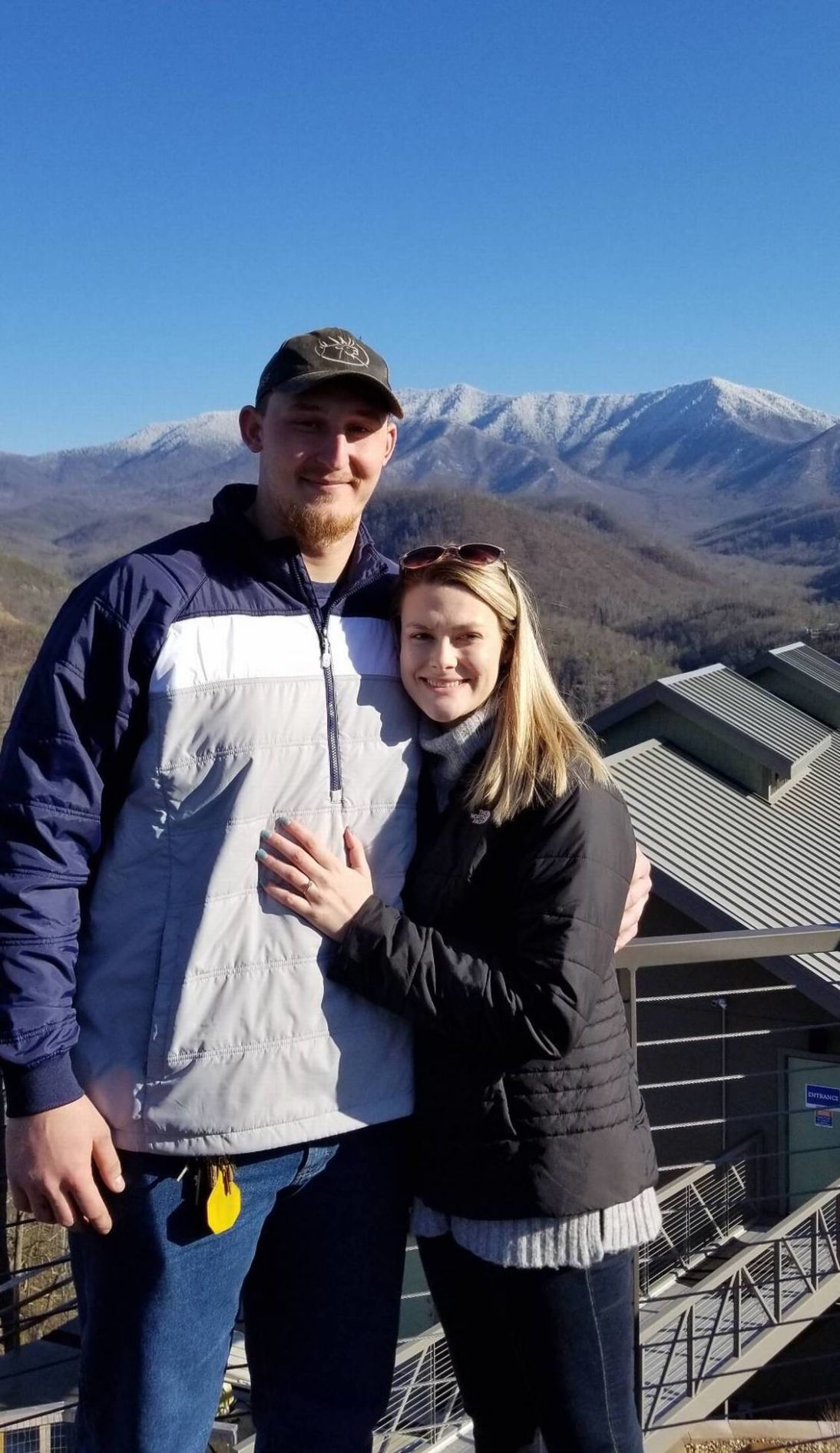 Kentucky offensive lineman Landon Young proposed to Haleigh Johnson during a recent trip to Gatlinburg, Tenn. They met 2½ years ago in a class at UK. (Submitted) 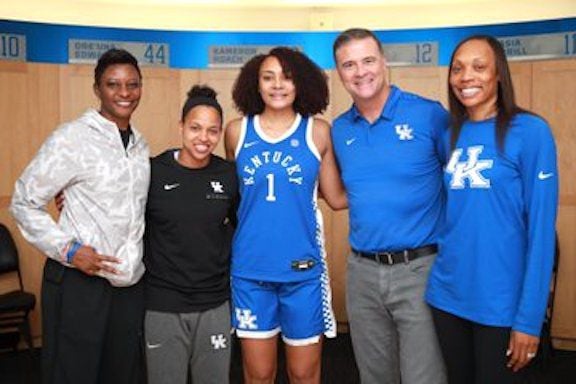 Treasure Hunt (center) got plenty of help from her family before deciding playing for this Kentucky staff was the right choice for her. (Submitted) 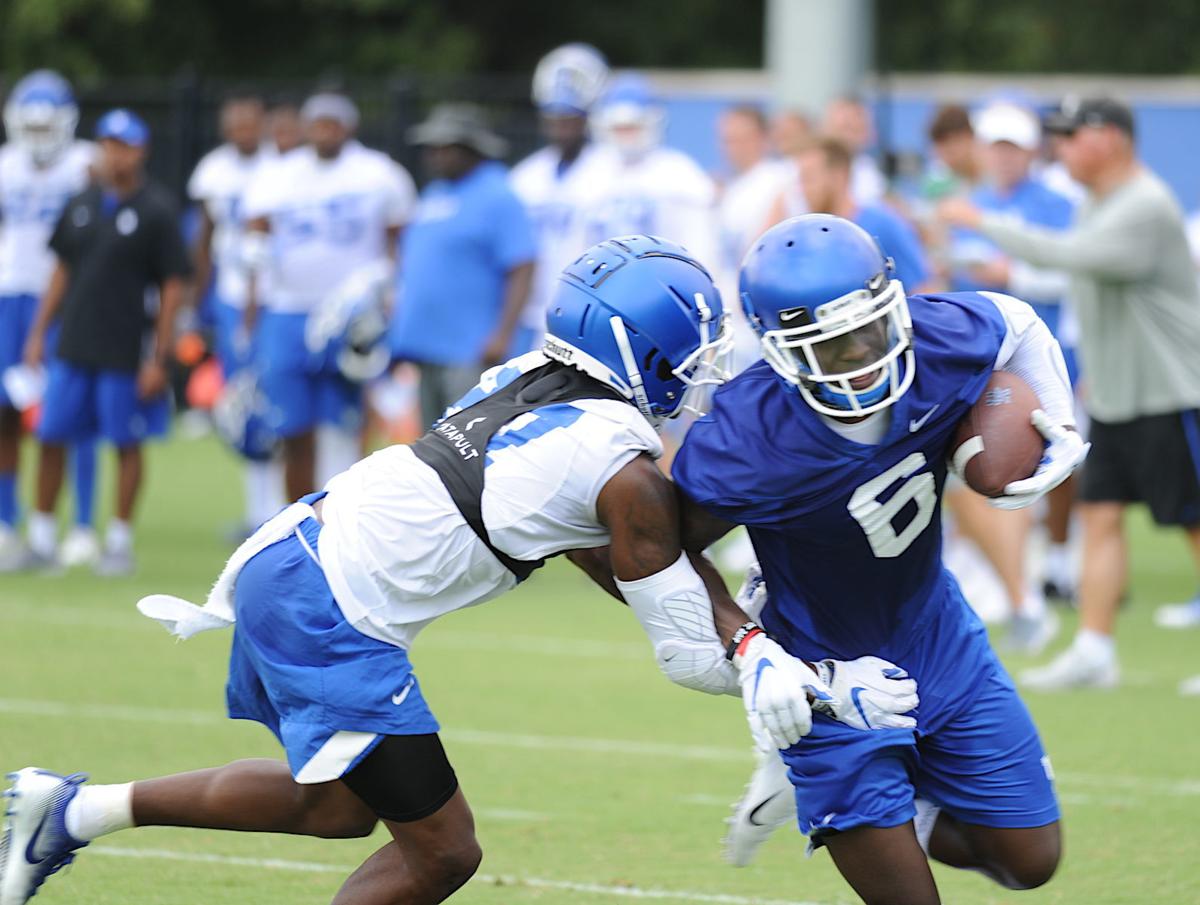 Kentucky senior wide receiver Josh Ali, who had the winning touchdown catch in the Belk Bowl, will be playing for his third position coach at UK now that Jovon Bouknight has been named the new receivers coach. (Vicky Graff Photo)

Kentucky offensive lineman Landon Young proposed to Haleigh Johnson during a recent trip to Gatlinburg, Tenn. They met 2½ years ago in a class at UK. (Submitted)

Treasure Hunt (center) got plenty of help from her family before deciding playing for this Kentucky staff was the right choice for her. (Submitted)

Kentucky senior wide receiver Josh Ali, who had the winning touchdown catch in the Belk Bowl, will be playing for his third position coach at UK now that Jovon Bouknight has been named the new receivers coach. (Vicky Graff Photo)

It might be hard to believe considering Landon Young’s size – 6-foot-7, 320 pounds – that anyone would not know he’s a football player, but Haleigh Johnson says she did not know when she met him in class at the University of Kentucky.

“My friend knew him. It’s usually easy to spot a UK athlete. I knew he didn’t play soccer or basketball, but I had no idea he was a football player,” Johnson said.

Once she found out he not only played but was a starter, she apologized to him for thinking he might have been “someone who just stood around” during games.

Johnson is from Floyd County in eastern Kentucky and went to Pikeville High School. Young went to Lafayette High School in Lexington. Now the two are recently engaged.

“It was definitely love at first sight,” Johnson said. “I didn’t know he was trying to hit on me in class at first. I thought he was just messing around. He would poke at me, do the typical things boys do to flirt. He did it to a couple of other friends in class, but he told me he had to do that to not make it that obvious he was flirting with me. He plans stuff too much at times.”

That included recently when he proposed to Johnson during a trip to Gatlinburg, Tenn., with both of their parents. The families had told Johnson the visit to Gatlinburg was a “birthday trip” for her so the families could celebrate together. She decided to visit SkyBridge rather than Anakeesta because she had been there before.

They rode the sky lift to the Gatlinburg SkyBridge. Both sets of parents knew that’s when Young planned to ask her to marry him – he had asked her father’s permission already.

“I was not putting anything together. My dad loves to take pictures. There was snow on the mountain and it was not weird for him to have his camera out,” Johnson said. “Landon pulled me over to take a picture, and he normally hates taking pictures. He said, ‘Do you love me and I have a question to ask?’ I thought he was joking.”

She had anticipated he might ask her to marry him at Kroger Field before or after a UK game with 50,000 or more fans watching. She was fine only having 30 to 40 watching in Gatlinburg.

“Actually I was OK with whatever he wanted to do. I knew I would say yes, even if I was in shock,” she said. “I don’t think he was ever worried about me saying yes. The bad thing is I really don’t know if I actually ever said yes. I just stuck my hand out (for the ring) and he said, ‘Is that a yes?’ ”

Young had the engagement ring she had picked out and admitted he did totally surprise her with that.

“We chose (Christmas) gifts for each of our parents. We got his mom some things for the kitchen and also knew she wanted earrings,” Johnson said. “We bought some and the jewelry store offered to shine them up, so I thought I would just look at rings. She (the salesperson) caught me looking at engagement rings and asked me if I saw something I liked. Landon said, ‘You know you want to.’ I felt awful and didn’t want him thinking that was all I wanted. So he got me pretty good by tricking me into doing that with the ring.”

She enjoys watching him play football, but admits she sometimes gets a “little too into it” during games.

“If I am not at the game, I am screaming into the TV,” she said. “At games, I will sometimes just have to hold my breath because I don’t want to say something and make people think I don’t know what I am talking about. Before meeting Landon, I knew more about defense than offense. I definitely have learned a lot about the left tackle position.”

Young contemplated giving up his final season at UK to put his name into the NFL draft, a move Johnson would have supported.

“I told him, ‘You do what you want to do, we will make it work,’ ” she said. “Honestly, I was surprised he did stay. He didn’t want anyone to sway him on his decision. He kept pretty much to himself until he made it. The decision was all him.”

She graduated in May 2019 and was willing to move to the city where he would be playing if he decided to go into the draft and give up her job as administrative assistant for the Kentucky Center for Agriculture and Rural Development, where she assists Kentucky farmers in various ways with business plans, budgets, loans, grants and more.

“I had no ag background at all other than I loved cows and would have cow birthday cakes,” she said.

She won’t have a cow cake June 27 when they get married in Lexington – the logical spot since her family is from eastern Kentucky and Young has family members in western Kentucky.

“Plus he has introduced me to all of his really close friends here (in Lexington) and they are now my friends, too,” Johnson said. “I want them all to be part of my day, so it just made sense to get married in Lexington.”

She also had to be flexible with the wedding date that was set before the coronavirus outbreak canceled spring practice as well as on-campus classes.

“We had to set the date pretty quick and with football we just had to find what time we could to make it work,” she said.

That date is not going to change.

“We will either get married in the place we planned or in somebody’s backyard or somewhere,” she said. “We are definitely getting married that day and that will give us a few days before he has to really get serious about football.”

That day will still be a little surreal to her.

“I just never thought I would end up with somebody that so many people talk about,” Johnson said. “Everybody just loves Landon, but that’s OK because I do, too.”

In his first seven seasons at Kentucky, coach Mark Stoops had three receivers coaches – Tommy Mainord (2013-15), Lamar Thomas (2016-17) and Michael Smith (2018-19). Recently Stoops made another change at that spot when he hired Jovon Bouknight, who had been coaching at Oregon.

Kentucky has had trouble with consistent production from its receivers and former UK running back Anthony White admits another coaching change “worries” him a bit, especially without knowing why Smith is no longer on the staff.

“I have complete faith that (offensive coordinator Eddie) Gran will utilize the receivers to the best of his ability, depending on which quarterback he uses,” White said. “The offense Gran runs is more beneficial for the ground attack, which leads to not a lot of success catching the ball.

“But a lot of the success the Kentucky offense had last year was because they (the receivers) were so selfless to go downfield to block. That’s a skill, too.”

White says the best position coaches find ways to get their players to buy into what they are saying.

“I think the last few receivers coaches have had huge personalities of their own and I am not sure that went over with guys not getting the ball that much,” White said. “Those guys (receivers) want touches. You have to let players live in the moment. It can’t be about what the coach did or where he’s been. Guys just want to play.”

Smith’s departure could have one other impact – recruiting in Louisiana. Kentucky has LSU transfer cornerback Kelvin Joseph, redshirt freshman quarterback Amani Gilmore and 2020 defensive back signee Joel Williams of Louisiana all on the current roster.

“All you want to do is get the pipeline open so when you have a recruit up to visit he will have someone here who is from Louisiana to talk to,” White said. “With the direction LSU is going, they can’t take everybody in Louisiana. Many of those other kids still want to play in the SEC and can see an opportunity to come to Kentucky and play, especially if they have somebody here they might know or know about.”

Kentucky signee Treasure Hunt, the highest-ranked player coach Matthew Mitchell has ever signed, got plenty of family help during her recruiting process.

“Everybody thought I would get overwhelmed by the colleges offering me,” Hunt said. “I knew how to handle it because my older sisters and brother all had colleges looking at them and they told me what to do and what to watch for.”

Her sisters were college basketball players and her brother was a “great” baseball player.

“They gave me really good tips. They told me how to keep my numbers (of colleges) low so I would not get overwhelmed. If I was not interested, they told me not to even tell the school I was interested so they would not get their hopes up for no reason and could spend time looking somewhere else for players.”

Centre College coach Greg Mason is an avid University of Kentucky basketball fan. He was when Rick Pitino was coaching Kentucky and is now with John Calipari coaching and has had numerous interactions with both coaches.

He was not surprised when Pitino was hired at Iona to put him back into college coaching after he was fired two years ago at Louisville.