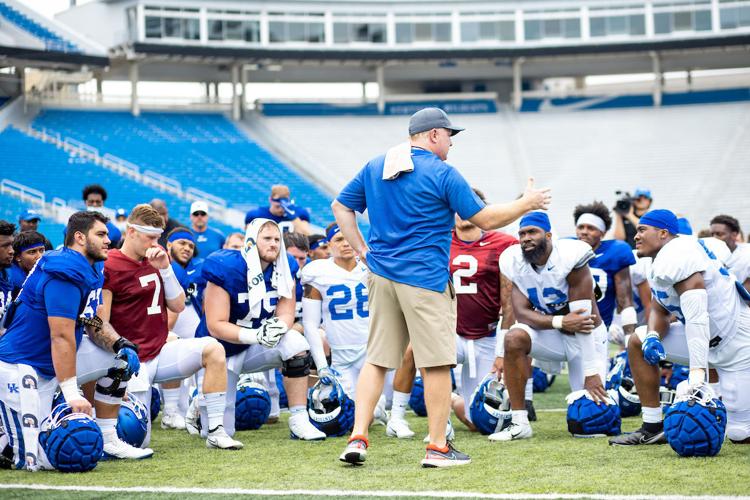 Vince Marrow says Kentucky having three players among the first 65 picked in the NFL Draft verifies the terrific job Mark Stoops has done at Kentucky. 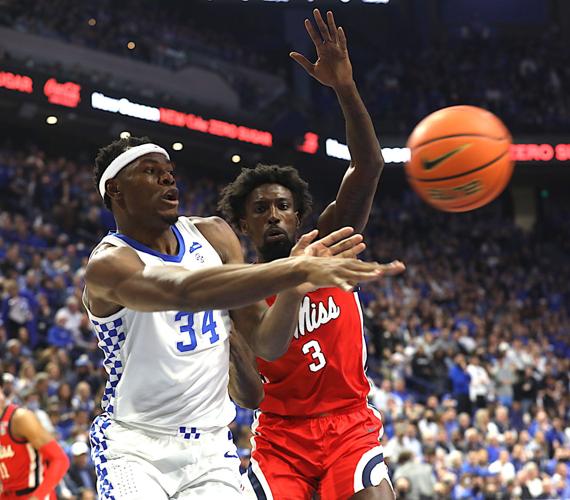 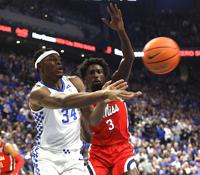 John Calipari says Oscar Tshiebwe is an “authentic” person who evaluated correct information before making his decision about his future. 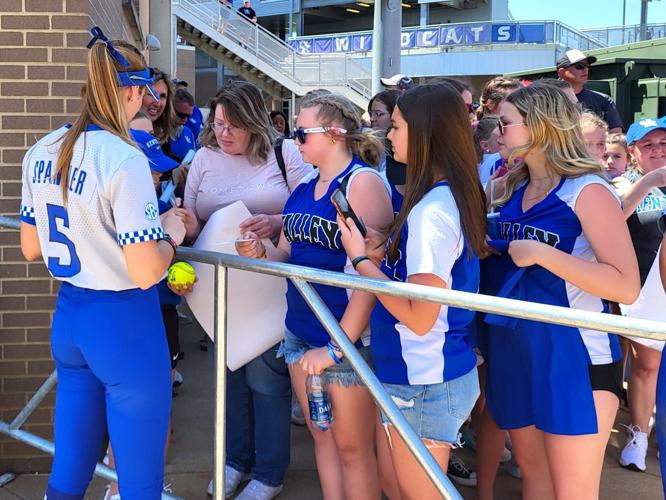 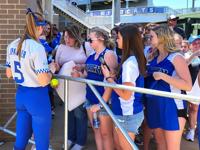 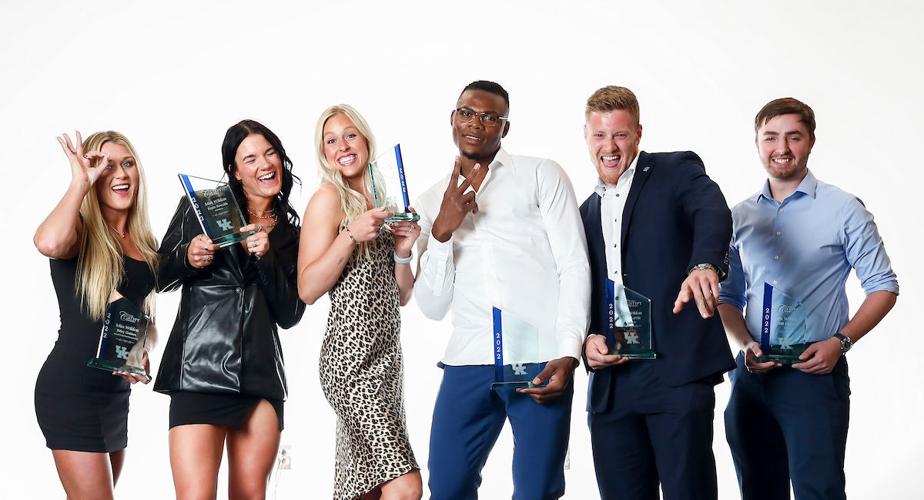 Vince Marrow says Kentucky having three players among the first 65 picked in the NFL Draft verifies the terrific job Mark Stoops has done at Kentucky.

John Calipari says Oscar Tshiebwe is an “authentic” person who evaluated correct information before making his decision about his future.

However, nothing might be showcasing the improvement of Kentucky football more than the NFL draft.

The Wildcats had four players drafted in last week’s draft, including three in the top 65 picks, and three signed free agent contracts immediately after the draft ended.

“Coach (Mark) Stoops is one of the top 10 coaches in college football right now. I don’t know if any other coach could have pulled off what he has built,” said Vince Marrow, Kentucky’s associate coach and recruiting coordinator. “There are a lot of coaches who do it very well at their schools but I don’t think they could have done what Mark Stoops has done here.

“He took over a program that was 2-10 in the most dominant league in football. We were worse than Vandy. I was telling coaches I was coming here and they would say, ‘Why go there? You will be fired in two or three years because you can’t win there. Culture is bad, never have a draft pick and you can never recruit the type players to win in that conference.’ That’s why Mark Stoops has shown he’s one of the best coaches in the country.”

ESPN’s Peter Burns noted that UK had more players picked in the first 65 picks than Ohio State, Clemson, Florida, USC, Texas and Oklahoma. He said Stoops “continues to be one of the best coaches in developing talent” to back up Marrow’s belief.

Former Cats’ Pause publisher Oscar Combs has followed UK for over 50 years. He knew how historic having three players go in the first 65 picks was for the Kentucky football program.

“It’s truly amazing what last season’s 20-17 Citrus Bowl win over Iowa and 10-3 record have done for the reputation of UK football. No better example of this than watching and hearing TV analysts toast UK during the NFL Draft when three Wildcats were taken in the third round,” Combs posted on Twitter.

Kinnard, an All-American lineman, was expected by many to be in the top 100 but fell to Kansas City in the fifth round with the 145th overall pick. That meant UK now has had four or more players picked in the first five rounds twice in the last four years. The only other time that happened was in that historic 1966 draft.

Marrow believes Kinnard will still have a long, productive NFL career and can rattle off a long list of players drafted in the fifth round or later who have been successful.

“Darian was a high-profile guy and a lot of people were saying first round. You always have the potential to be a first-round pick but I was sure he was a lock to go in the second round,” Marrow said. “Sometimes the NFL gets too cute but the good thing for Darian is that he slid to a Super Bowl team where he can compete for a starting job.”

SEC Network/ESPN host Alyssa Lang watched Kinnard play the last two seasons and was as shocked as Marrow and UK fans that Kinnard did not go sooner.

“This pick is among the best steals of the draft this year,” Lang said after Kinnard’s selection Saturday. “I fell asleep early last night and woke up astounded that he hadn’t been picked up. Loved watching and talking to him this year.”

Before Oscar Tshiebwe officially announced he was staying at Kentucky for another season he had some telling him he should go ahead and start his professional career after sweeping national player of the year honors.

“There were people in his ear trying to get him to leave anyway up until the end. He did a video, according to our people, the week before (his decision) and said I’m coming back and another video that said I was leaving in case he changed his mind,” Kentucky coach John Calipari said. “So it was him saying, ‘I want to come back, win a championship, and be a lottery pick.’ And I said, ‘Alright, I like those two things. Let’s go for ‘em.’ “

Calipari admitted he had doubts about whether Tshiebwe would return until he went through the NBA evaluation process.

“When I met with him he said, ‘Coach, I had more fun playing basketball than I’ve had ever. And I got better.’ So he says, ‘Unfinished business.’ The one thing he said, ‘I gotta pray to God,’ ” Calipari said.

“The kid is authentic now. Just authentic. So I knew what he was saying. I said, ‘When you pray, you can’t say, ‘God, please influence me to leave. That’s not a good prayer.’

“And so when he hit me back, he said, ‘I asked God why could I win every award and do all that I did and not be a (NBA Draft) lottery pick and the answer I got back is that you have unfinished business.’ Could you imagine?”

Calipari said he didn’t like to be the one sharing NBA information and telling players what to do when they are weighing their future options. Instead, he wants to funnel information to them.

“He was projected by the NBA, the 30 NBA GMs, who evaluate the players that put their name in. The NBA gives you the information. Whatever it says, they’re 97% correct,” Calipari said.

“So when someone says, ‘Yeah, I don’t care what that thing says, you’re going to be the 20th pick of the draft.’ It’s just not true. In the NBA, if you’re a second-round draft pick, 85% aren’t making it. The average length career of a second rounder is 100 games. So the point is, go in that league when you can get yourself in the first round.

“And the better the positioning, you have a better chance of playing and doing stuff if you’re picked early in the draft. If you’re picked late, you better be lucky like Tyrese (Maxey) and Immanuel (Quickley) where they should have taken you 12 or 11 or 10 or 9 and you go 20, look at those two. Our kids go into that league when they’re ready to play and ready to fight.”

Tshiebwe understands that but also knows his national player of the year status will put a target on him next season.

“I like when I am the target for a lot of people. I like when people are coming for me,” Tshiebwe said. “I study a lot.”

He said he often lays in bed watching videos of future opponents to see how they might try to stop him.

“Everybody saying, ‘I am going against Oscar. I got to destroy him.’ I think I will be good,” the UK junior said. “God has blessed me with this best model.”

Even after a brutal 13-0 Southeastern Conference loss to Missouri, Kentucky senior Tatum Spangler was all smiles signing autographs and posing for pictures with young fans immediately after the game.

“It just warms your heart. That’s what these little kids are here for,” Spangler said. “They are for us. They are here to watch us but also to see us and be influenced by who we are and we try to do our best to accommodate them.”

So even after a brutal defeat is it easy to smile with the young fans?

“It is easy to do when they have a smile on their face, too. It is very contagious,” Spangler said. “I think they actually help us feel better after a loss because they are still so excited to see us.”

Spangler is one of a few national athletes to have an endorsement deal with Big League Chew, a bubble gum company. She provides bubble gum for her teammates every game but is not allowed to hand it out to the young fans.

“I wish I could. NIL (name, image and likeness) is still all new so I am not sure what I can and can’t do,” Spangler said. “But the partnership has gone great. Everyone in the dugout enjoys my deal because I always have a pack (of bubble gum) in my back pocket.

“They (Big League Chew) ship it to me and I have a bunch of gum. I bring a couple of packages to every game both at home and on the road for the team to have.”

At last week’s CATSPY Awards at Kentucky, named Mr. Wildcat were Oscar Tshiebwe of basketball, Will Shaner of rifle and Luke Fortner, Will Levis and Josh Paschal of football. The Miss Wildcat honors went to Abby Steiner and Masai Russell of track, Riley Gaines of swimming, Kayla Kowalik of softball and Ali Stumler of volleyball.

That’s an incredible list of athletes. Tshiebwe was the national player of the year. Shaner was an Olympic medalist. The football players helped UK win 10 games and Fortner and Paschal were just picked in the NFL draft. Steiner is the nation’s best sprinter and Russell, Gaines, Kowalik and Stumler all are All-Americans.

The Mr. And Miss Wildcat awards, though, are about more than athletics. They are given to those who have represented all-around excellence in athletics, academics, character and service during their UK careers.

Even for highly successful athletes, the CATSPY Awards are special.

“It’s just a special event at Kentucky and one everybody really likes and enjoys. It also really shows just how many great athletes you have at Kentucky when you get them all together like that and why being honored is so, so special.”

Quote of the Week: “He will be around a 40% shooter from the outside, specializing in catch and shoot looks, especially in an organized offense. He can go get you a bucket off of the bounce, getting to the rim or pulling up in the mid-range. Kentucky didn’t have anyone outside of TyTy Washington who could do that last season,” Cats Illustrated analyst Travis Graf on UK transfer Antonio Reeves.

Quote of the Week 2: “When people are mad, they’ll say stuff. And that’s fine. It’s part of the tax you pay to be the Kentucky coach is that right there. And you know what? People don’t have access to this program. And what happens is, guys get angry,” Kentucky coach John Calipari on fans saying his top priority is not winning a national championship.

Quote of the Week 3: “He reminds us so much of John. I hate to put that on him. If you say that about anybody, you are giving a huge compliment but he deserves it,” Kentucky coach Mark Stoops comparing new offensive line coach Zach Yenser to former UK assistant John Schlarman{&end}