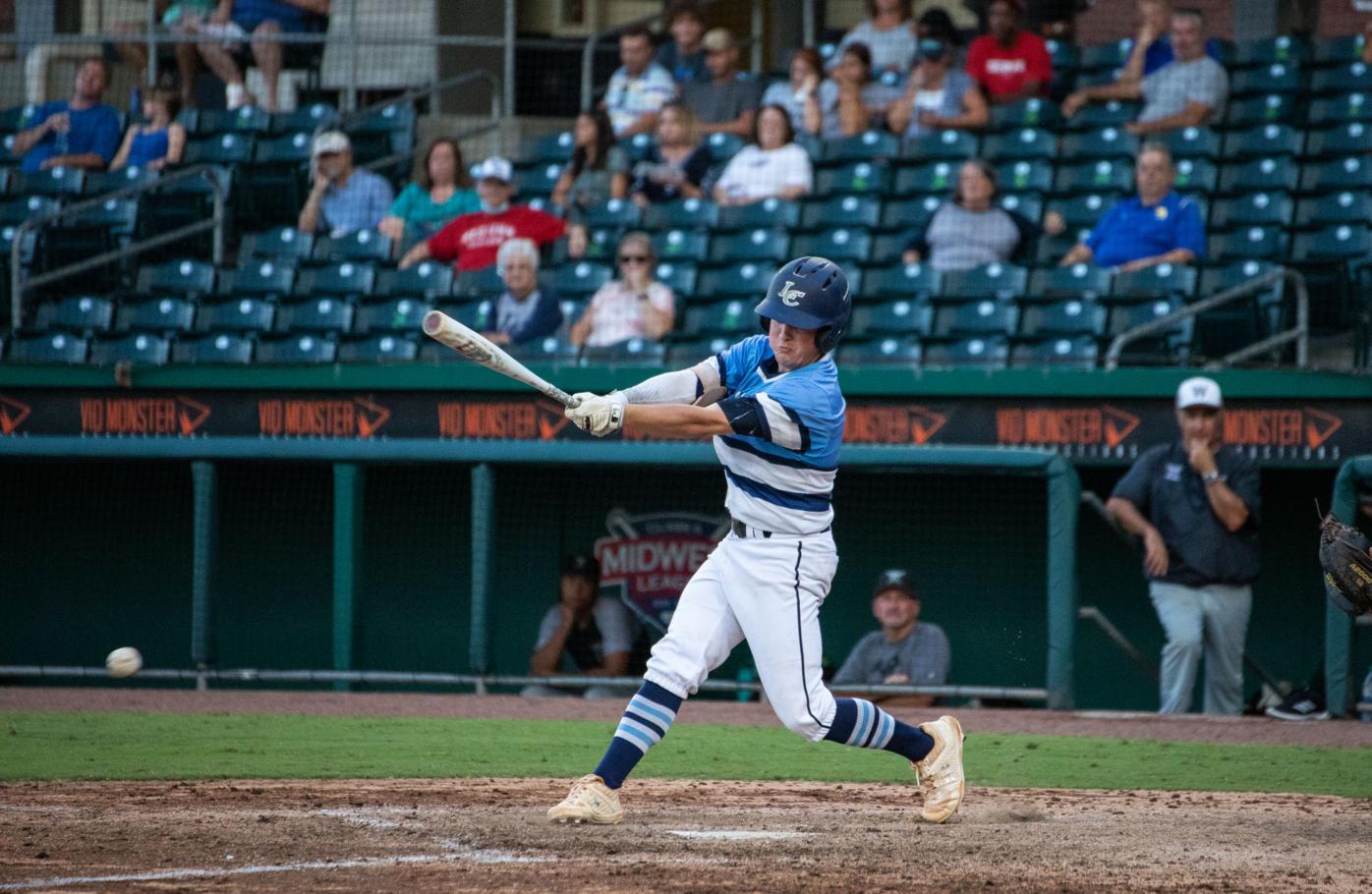 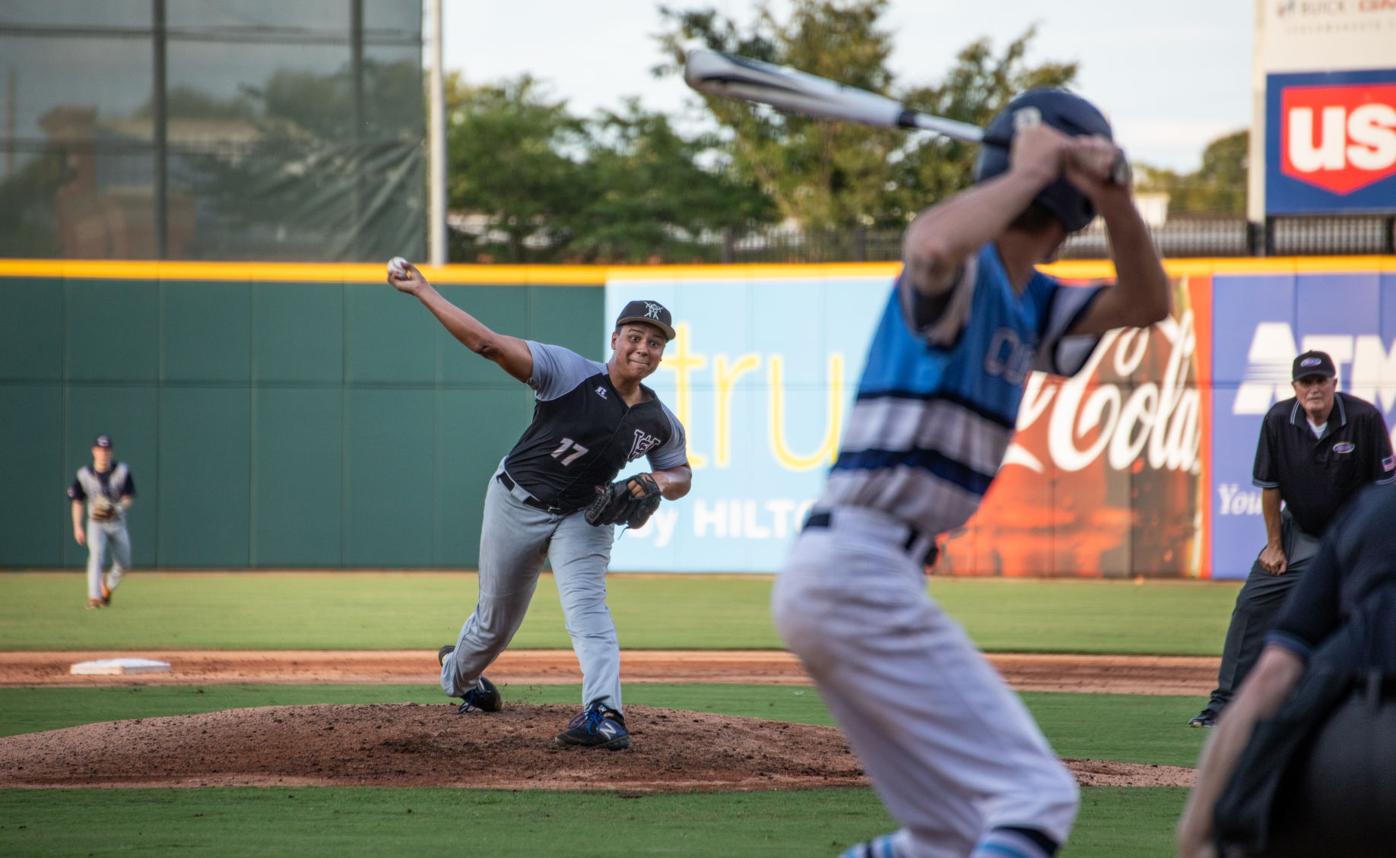 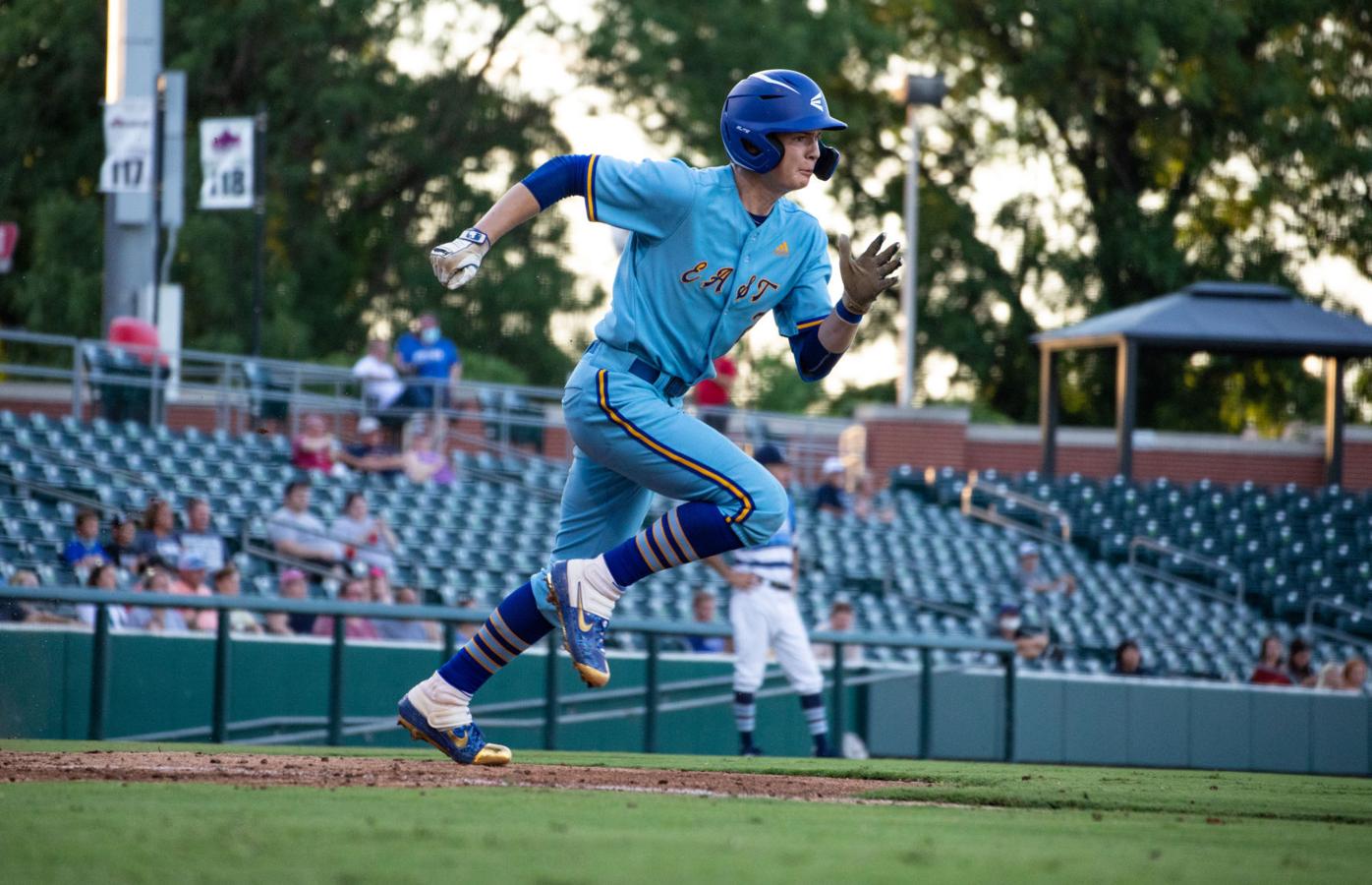 Warren East’s Tanner Burckhard runs to first base after batting during the Senior Showcase high school all-star game Saturday at Bowling Green Ballpark. Visit bgdailynews.com for a full recap of the game. 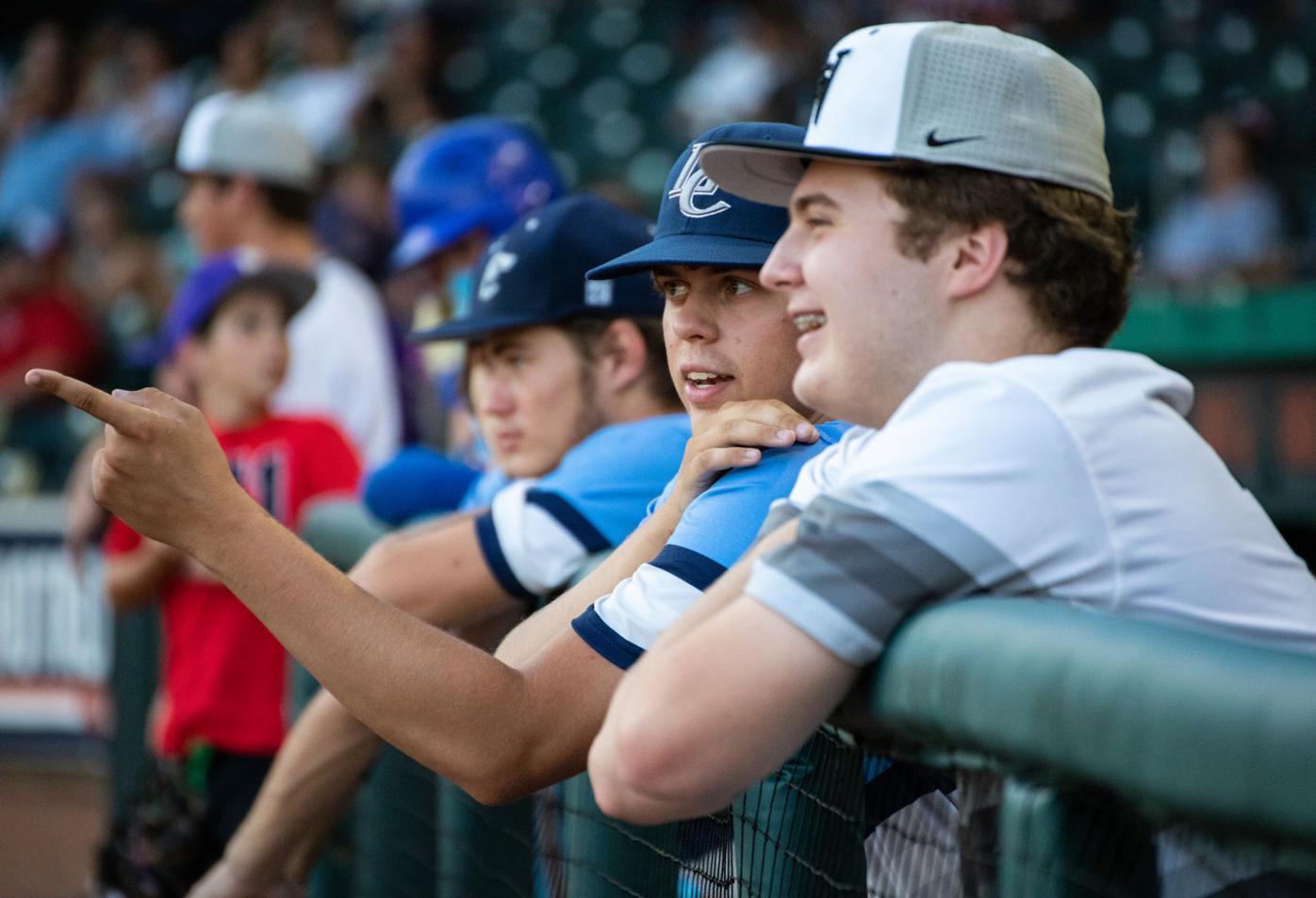 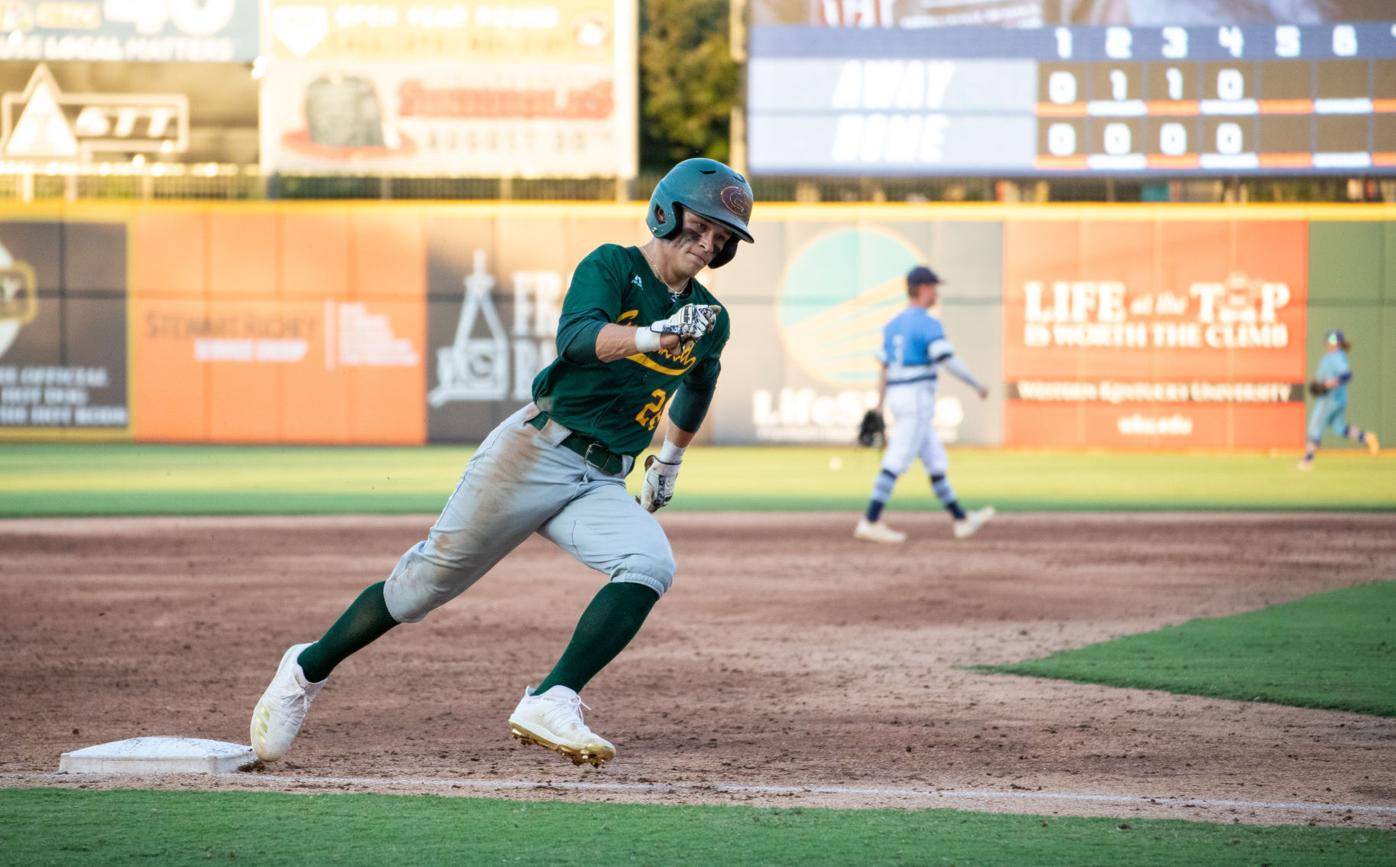 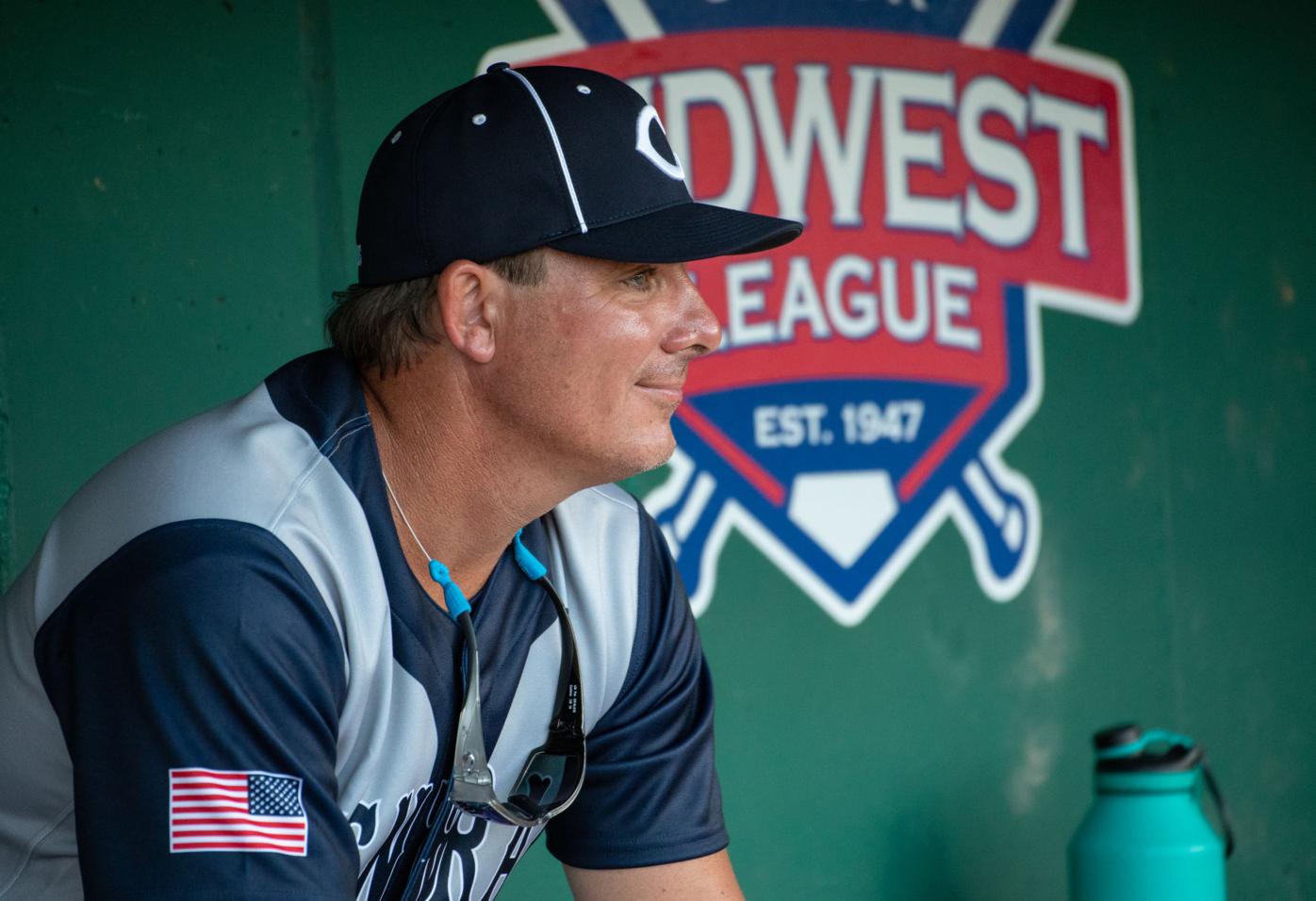 Warren East’s Tanner Burckhard runs to first base after batting during the Senior Showcase high school all-star game Saturday at Bowling Green Ballpark. Visit bgdailynews.com for a full recap of the game.

With two runners in scoring position in the bottom of the sixth inning, Braxton Meguiar took a 3-1 pitch to right field of Bowling Green Ballpark and, without hesitation, rounded first base, and then second, before diving safely head-first into third.

The hit gave his team — the home team comprised of players from Bowling Green, Logan County, South Warren and Warren East High Schools in the Bowling Green Hot Rods Senior Showcase — a lead they wouldn’t give up Saturday on the way to an 11-8 victory over the away team made up of recent Greenwood, Warren Central and South Warren graduates.

“I just came up there hunting for a fastball,” Meguiar said. “(Warren Central pitcher Noah Thomas) was struggling with the other two batters, so I was just waiting to get a good pitch to hit and he left it over the middle, and I just did what I’ve done for a long time.”

On a night of closure for area baseball players that recently graduated after losing their senior seasons due to the COVID-19 pandemic, it provided Meguiar a special opportunity he thought he had lost.

After standing up at third, he brushed the dirt off his uniform, clapped three times and gave a fist bump to his base coach. That coach was Ethan Meguiar — the longtime Cougars’ skipper who is also Braxton’s father.

“It’s special,” Braxton Meguiar said. “I’ve been able to do that a long time with him and just to do it one last time was a great honor.”

Meguiar, who will continue his career at the junior college level at Wabash Valley in Mount Carmel, Ill., drove home Warren East’s Bo Yoakem and Skyler Price with the hit, which put the home team ahead 6-5. Meguiar scored on a single from Bowling Green’s Carson Kelley and Warren East’s Will Howard later drove Kelley and Bowling Green’s Bo Morton home with a single in the six-run sixth.

Thomas started the inning on the mound for the away team, but was forced from the game after pitching 1/3 of an inning. High school teammate and Campbellsville signee Peyton Eversole replaced him and proceeded to pitch the next 1 2/3 innings.

The move brought Jay Shockley — an away team coach along with Greenwood’s Jason Jaggers and South Warren’s Chris Gage — to the mound. Shockley was hoping to help produce better results for a Warren Central program that has struggled in recent years in his first year at the helm this spring, but his coaching debut never came because of the pandemic. He recently resigned to take a teaching position at Franklin-Simpson and Steve Albert was hired to replace him.

“It’s a true blessing. This is the way I would want to go out, to at least have one game,” Shockley said. “I’m glad that the guys welcomed me to come on and finish this thing out. For the new guy coming in — Coach Albert — I wish him nothing but success.”

The home team added a run in the eighth when Yoakem singled home fellow Raider Tanner Burckhard to make it 11-5.

The home team’s pitching settled in for the next two innings after allowing runs in four of the first six frames to produce scoreless seventh and eighth innings. Burckhard and South Warren’s Paul Warrell pitched back-to-back 1-2-3 innings during the stretch.

Logan County’s Parker White came in to try to close out the game, but the away team kept fighting and plated three runs. Greenwood’s Ethan Gregory scored his third run of the game when Eversole singled to right, Eversole scored on a wild pitch and Greenwood’s Lance Upright added an RBI single.

White was replaced by Morton, who got South Warren’s Max Morris to pop out before striking out Thomas to end the game.

“It felt great to come out here and be in the Purples gear one more time and it was just a bonus for us to get a win tonight,” Morton said. “I had a lot of fun.”

Hot Rods general manager Eric Leach and director of sales Kyle Wolz approached Jaggers with the idea for the event. Jaggers contacted District 14 coaches, plus Logan County to help fill out rosters. Each player had head shots taken that were displayed on the scoreboard when they came up to bat or in to pitch.

“I’ve said it before that you never know when your last game is and you always try to prepare the players to play like it’s your last game, but you don’t know that your last high school game is going to be a scrimmage in March,” Jaggers said. “These guys were able to suit up one more time to put a cap on their high school careers.”

Jaggers’ away team got off to a hot start, taking a 3-0 lead into the bottom of the fifth. South Warren’s Keito Muto tripled home Morris in the second to open the scoring and Gregory scored in the next inning thanks to aggressive base running — he went from first to third on a ground out from Eversole and scored on a bad throw in an attempt to get him at third. Gregory scored again in the fifth on a single from Eversole.

South Warren’s Cade Vernon kept the home team scoreless through three innings, allowing a hit in each but finishing with seven strikeouts to keep the away team ahead. South Warren’s Adam Burns pitched a scoreless fourth inning after giving up a leadoff single to Howard.

The home team collected its first lead in the fifth. Morton, who struck out in his first two at bats since a scrimmage against Pleasure Ridge Park in March, hit a three-run double in his third at bat to tie the game before scoring on a ground out that put the home team ahead 4-3.

The away team scored twice in the top of the sixth — once on a ground out from Thomas and another on a wild pitch — to take a 5-4 lead.

“I thought it was a blast. I’ve enjoyed coaching against these guys — the players and the coaches as well,” Jaggers said. “I’ve enjoyed watching these kids grow up, and to be able to come out here and watch them play one more time was a lot of fun for me.”