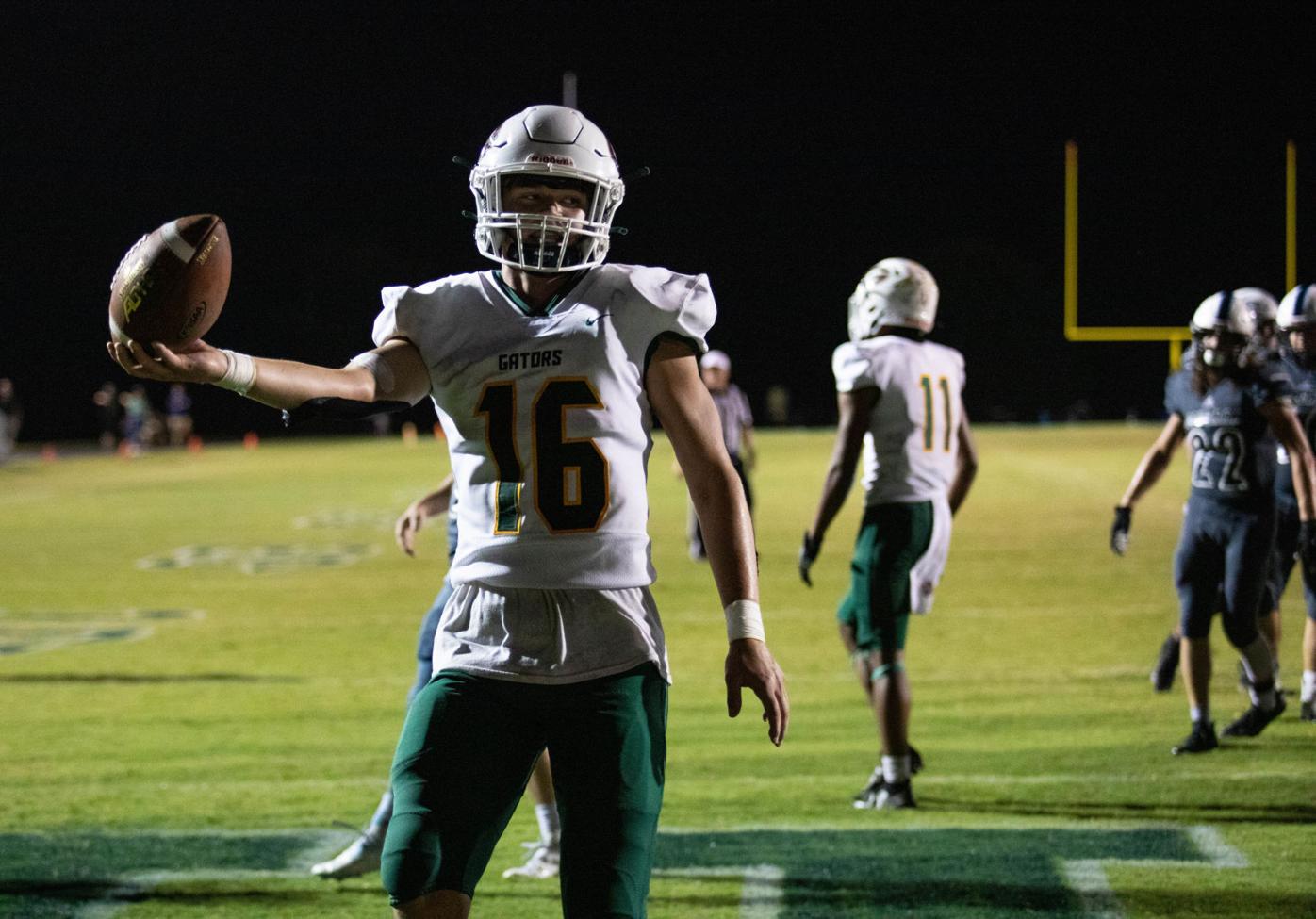 Greenwood’s Lofton Howard celebrates scoring a touchdown during the Gators’ 22-7 win over Logan County on Friday in Russellville. 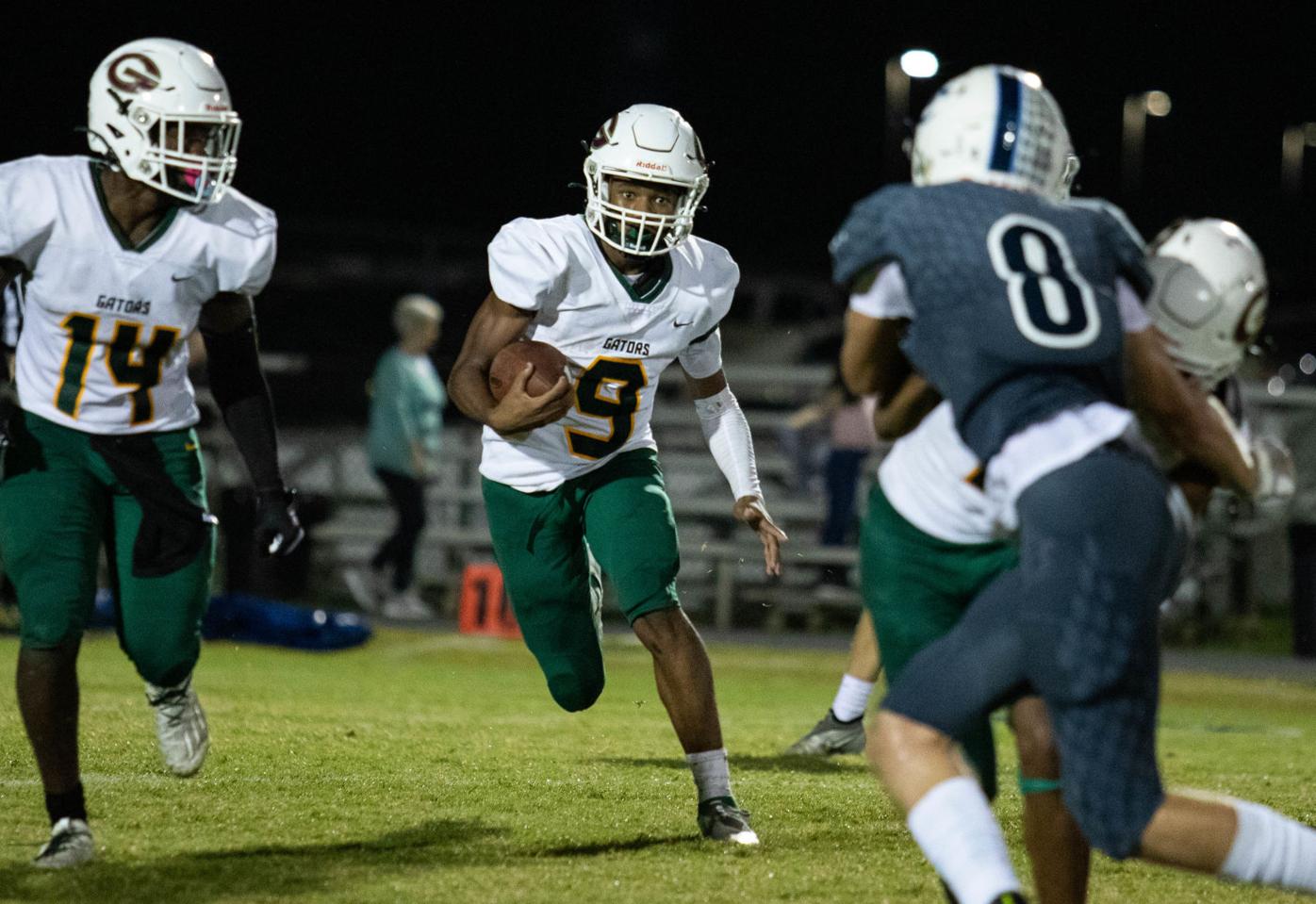 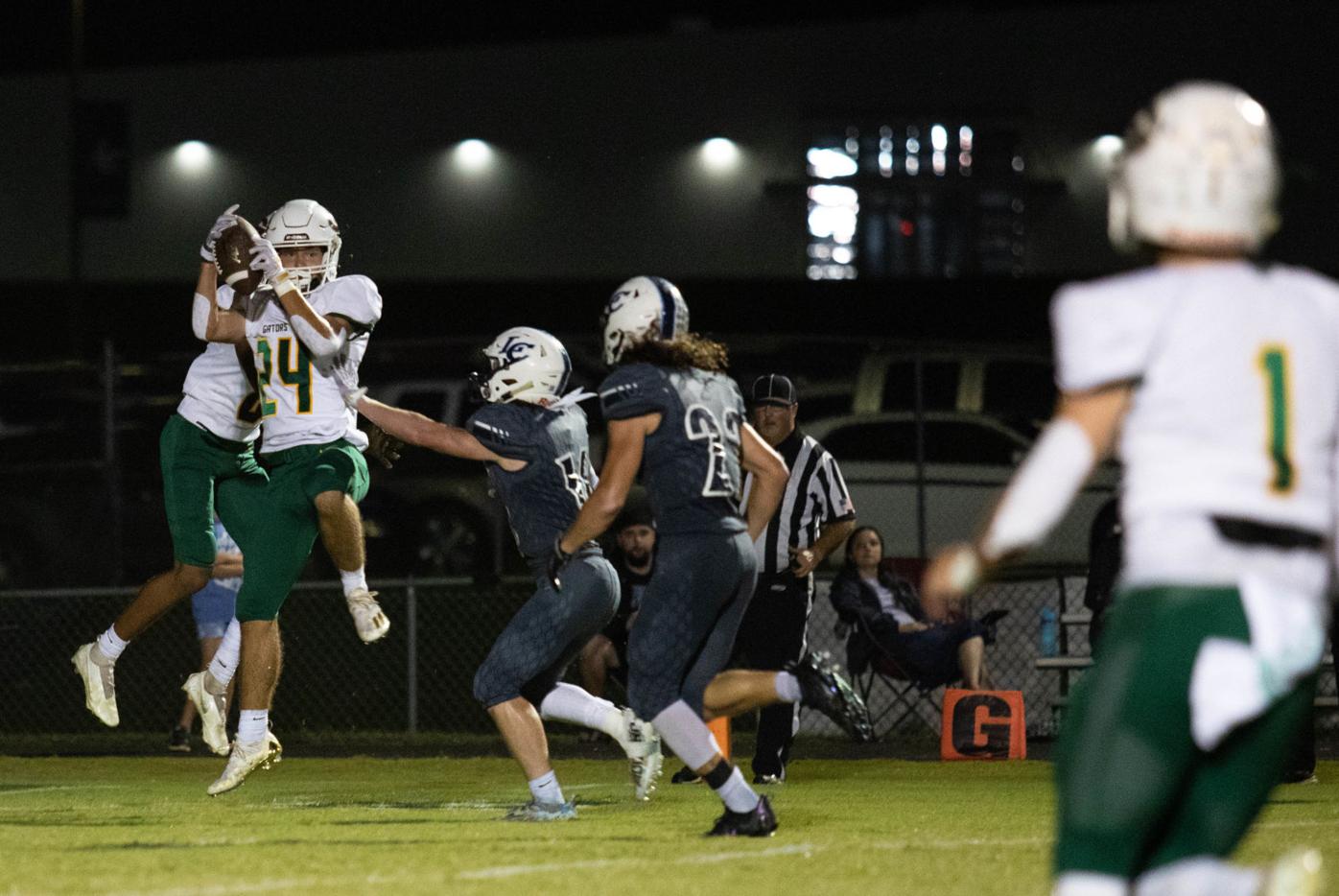 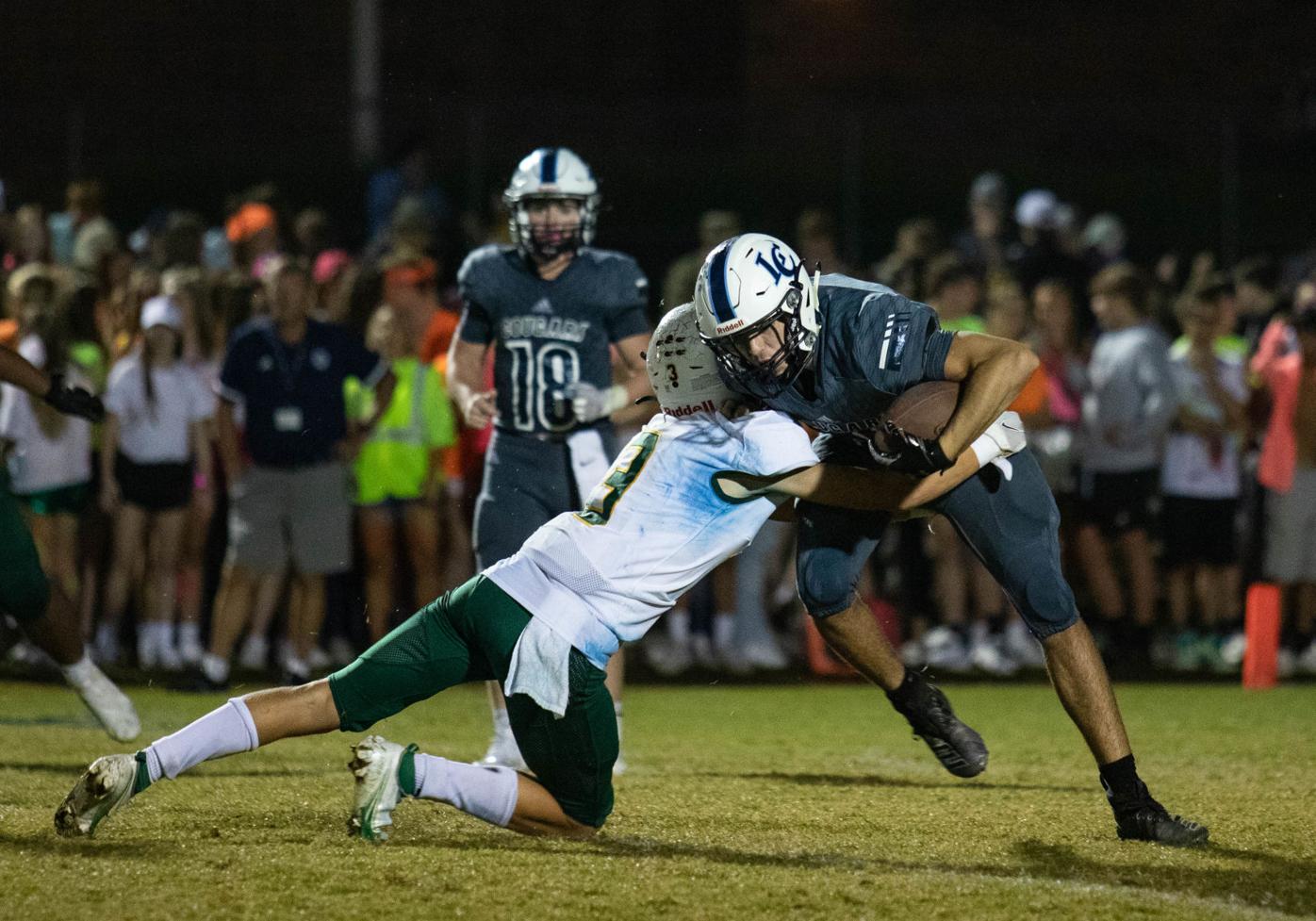 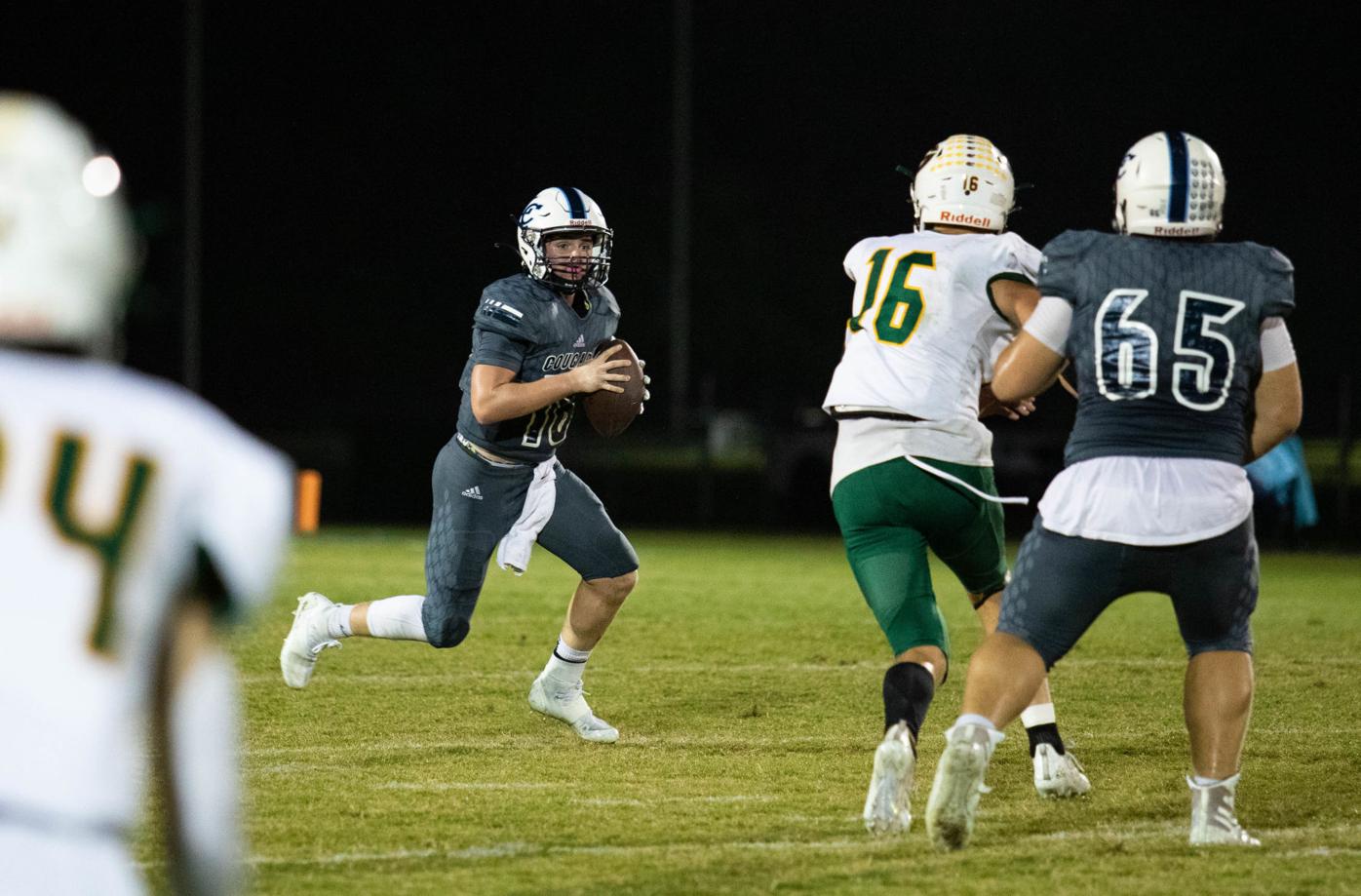 Greenwood’s Lofton Howard celebrates scoring a touchdown during the Gators’ 22-7 win over Logan County on Friday in Russellville.

RUSSELLVILLE – The Greenwood football team remained unbeaten this fall after a trip to Logan County on Friday.

The Gators made fewer mistakes between the two fairly evenly matched teams as the game went on and pulled away in the second half for the 22-7 victory over the Cougars.

“It was two really good teams and I think they were evenly matched and we were lucky enough to make some plays there at the end in the passing game to kind of go ahead there,” Greenwood coach William Howard said. “It was a great football game to watch and be a part of.”

The victory was Greenwood’s fifth in five tries this fall but marked its closest contest to date.

And it came after the Gators dug themselves an early hole.

After going three-and-out on its first possession, Greenwood had a punt blocked from its own 13-yard line, setting up a 4-yard scoring run from Wyatt Blake to give the Cougars an early 7-0 lead.

Greenwood nearly went down another score, but Davin Yates fumbled on a quarterback keeper at the goal line on Logan County’s next possession and were shut out for the remainder. The Cougars had other scoring opportunities, but had a pass picked off in the end zone in the second quarter by Andrew Hatcher and had another pass picked off by Chase Johnson after Greenwood went up by two scores to seal the victory.

“We had three turnovers that were very, very costly – two of them which were in scoring position and one of them on the 1 and the other one in field goal range,” Logan County coach Todd Adler said. “Halftime it very easily could’ve been 17 or 21-0.

“I thought that was a big turning point in the game, but hat’s off to Greenwood. They’re very disciplined, they’re well-coached and they’re hard-nosed. I knew we were going to have our hands full coming into the game. They made more plays than we did in the end, but I was proud of the way we fought throughout the game, but made a lot of bonehead, young mistakes that was very costly for us.”

The Gators got on the board with a 4-yard touchdown run by Lofton Howard to cap off a 10-play drive that started after Hatcher returned the interception from the end zone to the Greenwood 48, but the extra point was blocked and Logan County retained the lead going into halftime.

In the second half, the Gators played a cleaner game, used balance from their offense and a strong defensive performance to outscore the Cougars 16-0.

Greenwood quarterback James Salchli threw for 138 yards in the game, with all but a 44-yard completion late in the first quarter – his only completion of the first half – coming over the final two quarters. Tel Tel Long rushed for a game-high 130 yards on 20 carries, with 84 yards coming in the second half, and Jaylen Brock added 67 yards on 13 carries in the game.

The Gators took the lead with 2:33 to play when Salchli’s 12-yard pass found Ira Matheos in the end zone to cap off a seven-play, 76-yard drive. Salchli threw to Marquese Trussell on the conversion to make it 14-7.

After forcing the Cougars to punt midway through the fourth quarter, the Gators used a seven-play, 35-yard drive that all came on the ground to take a 22-7 lead. Jaylen Brock scored on a 2-yard run, and then caught a pass from Salchli on the two-point conversion.

“I liked the balance,” Salchli said. “Sometimes they kind of guessed our plays and they were wrong, so I really liked that because our offense, we can fake a lot of things. Passing – we have it and we showed that tonight, that we can throw it to a lot of people. If it doesn’t work out in the first half, there’s two halves to play, so we’ve got to keep fighting.”

The Cougars were able to string together some drives, but were unable to cap them off by adding points to the board after the early score. Davin Yates rushed for 72 yards and threw for 61, while Logan County leading rusher Ryan Rayno was limited to 12 yards on nine carries and Wyatt Blake had 22 yards on six carries, while also adding 57 yards on five receptions.

“I thought (the defense) played outstanding,” Howard said. “They had a couple runs, a couple first downs, but I thought up front we did a really good job of controlling the line of scrimmage and being able to shut down some of their players that have rushed for some big yardage up to this point.”

The loss was the first in the four games the Cougars had played this fall – a COVID-19 cancellation forfeit is listed on the team’s schedule from a game originally slated for Sept. 3 against Russellville, but it will be removed once the two play the rescheduled matchup Oct. 15. Logan County is scheduled to open Class 4A, District 1 play next week at Hopkinsville.

“Key thing, No. 1 is this is the last preseason game going into district play,” Adler said. “We’ve got a young team and the last two weeks they’ve grown a whole lot, made a whole lot of mistakes that hopefully we can get better from and the key thing is right now we’re still healthy going into district play. ... In the grand scheme of things, I’m proud of where we are right now. We just have to figure out how to capitalize and take advantage of opportunities when we get them.”

Greenwood is scheduled to return home with its 5-0 record for a game in The Swamp next week against Glasgow, before opening Class 5A, District 2 play the following week against Christian County.