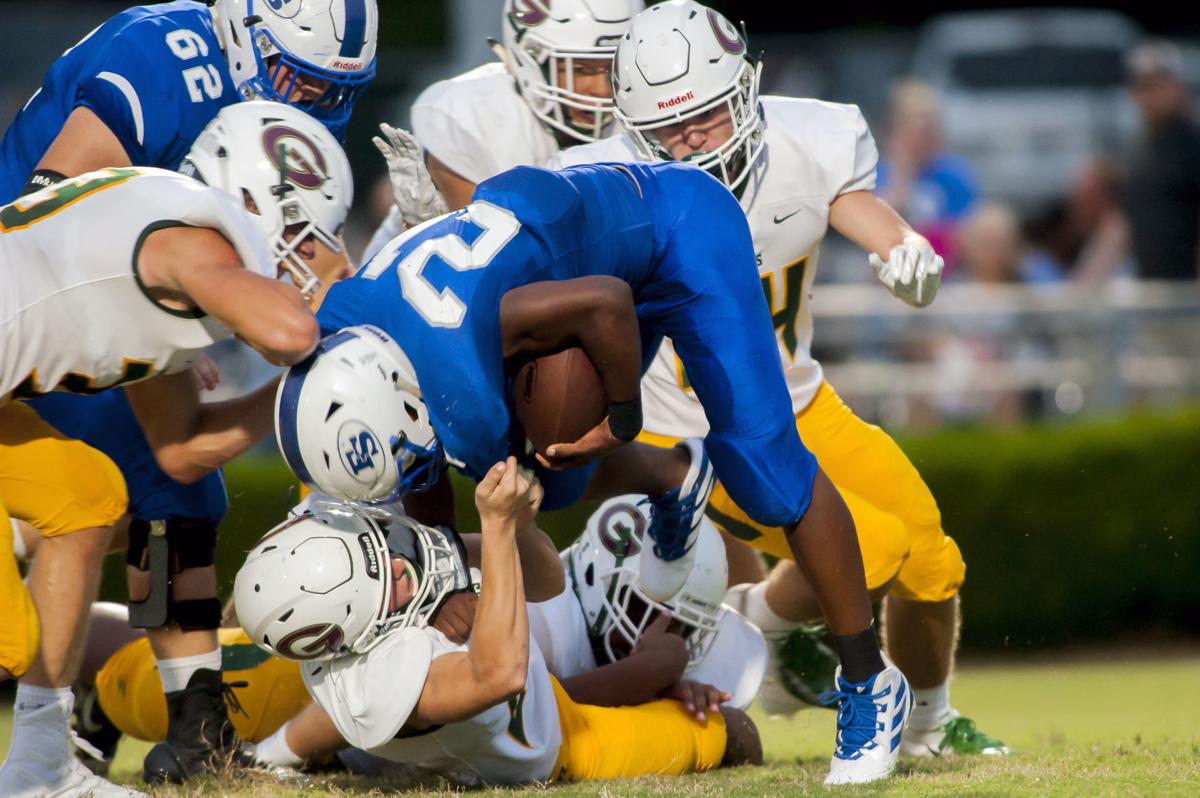 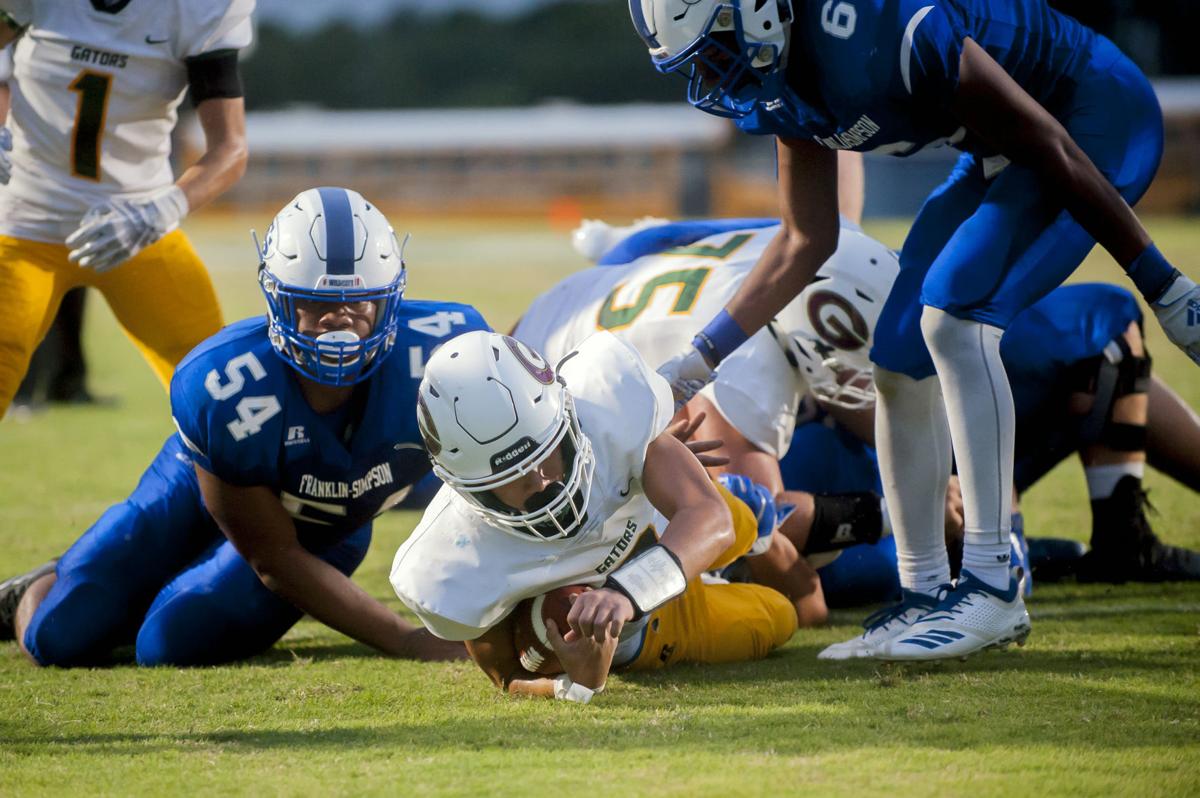 Greenwood’s Yuji Ogawa scores a touchdown ahead of Franklin-Simpson’s Leandre Stutzman (right) and AJ Burr on Friday during the Gators’ 28-14 win at Franklin-Simpson High School. For more photos, visit bgdailynews.com. 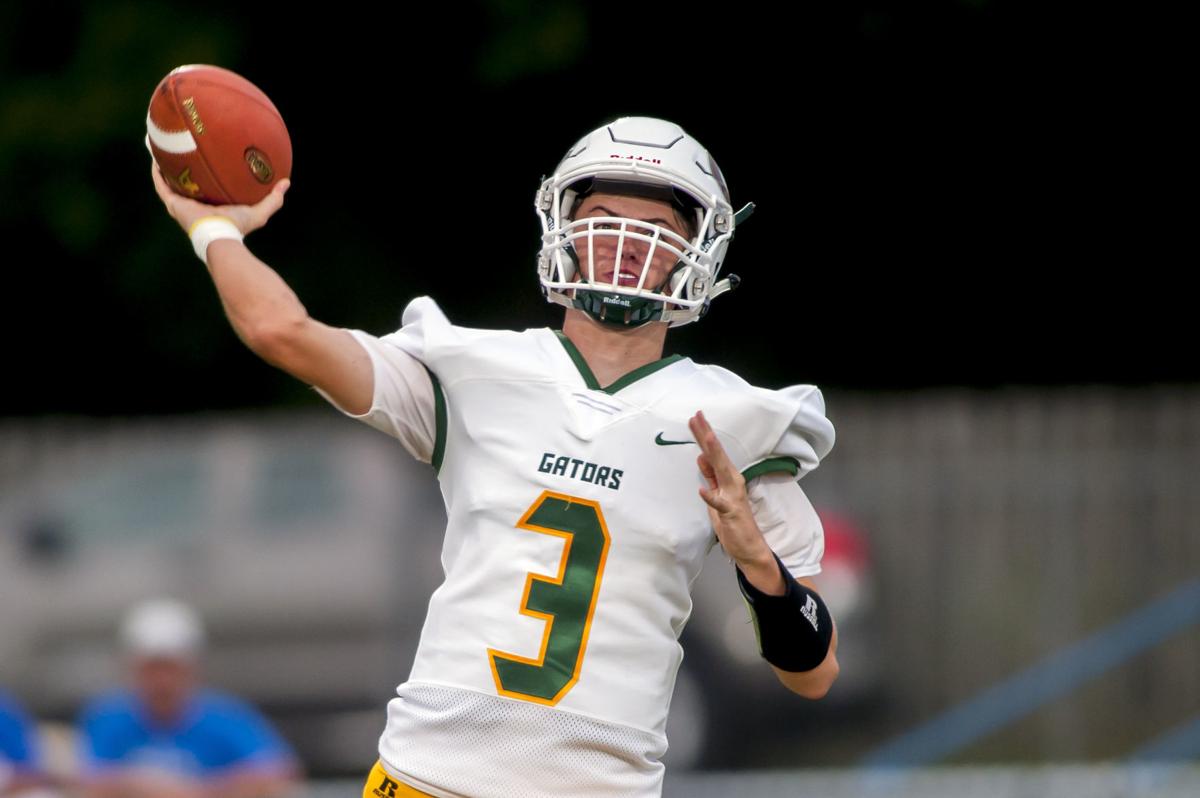 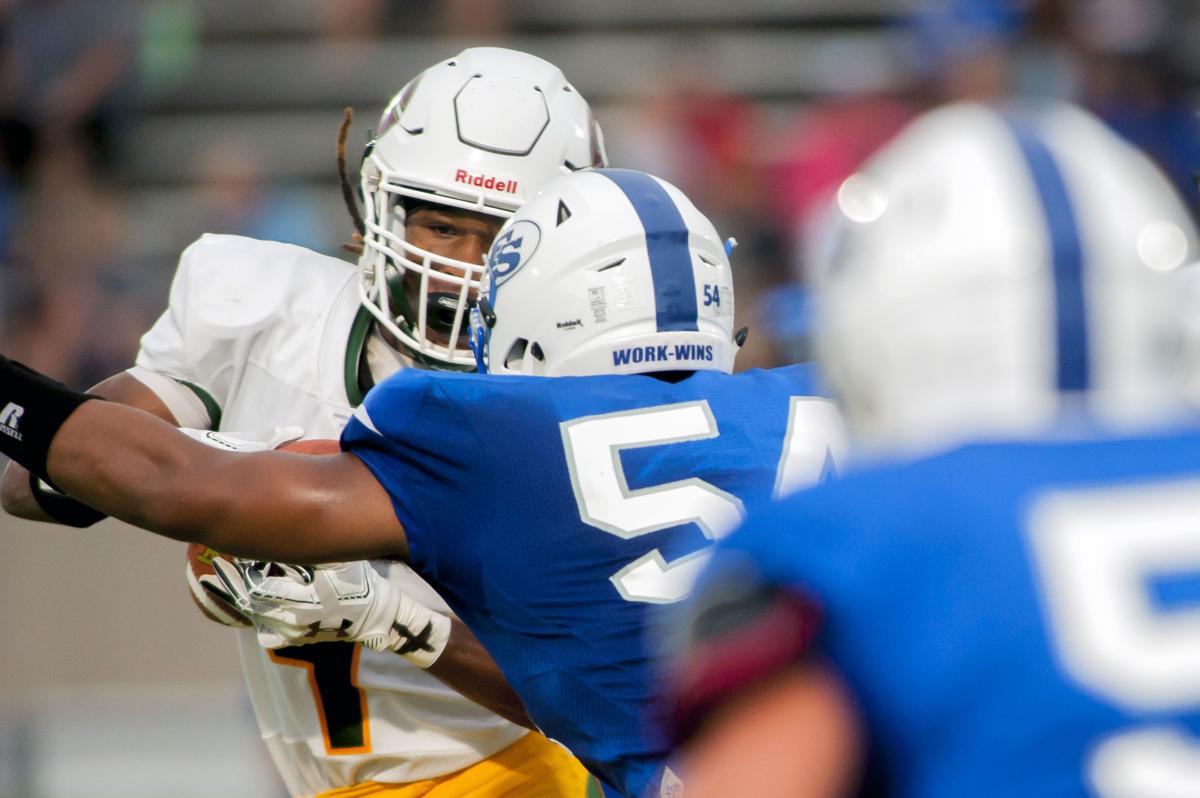 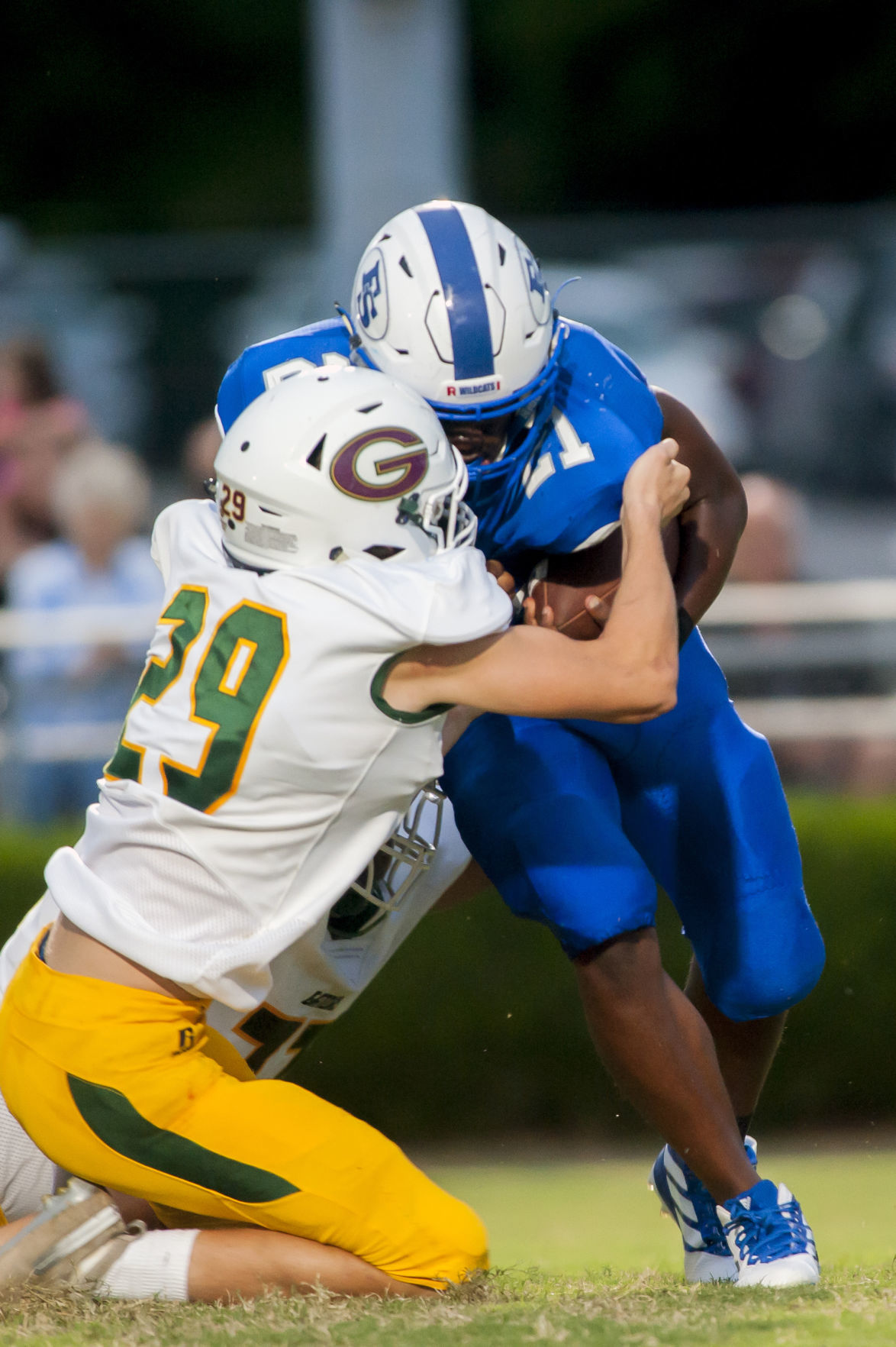 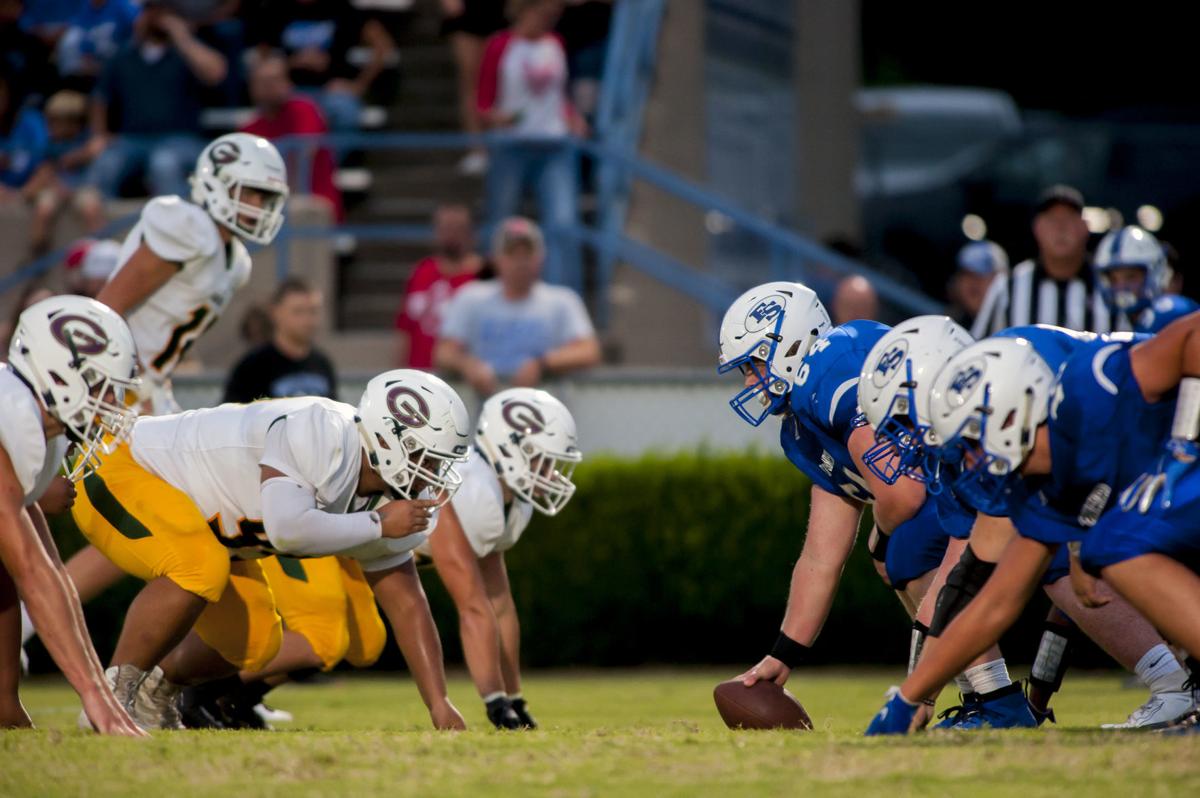 Greenwood’s Yuji Ogawa scores a touchdown ahead of Franklin-Simpson’s Leandre Stutzman (right) and AJ Burr on Friday during the Gators’ 28-14 win at Franklin-Simpson High School. For more photos, visit bgdailynews.com.

Greenwood avenged a 50-7 2018 loss to Franklin-Simpson on Friday by scoring 21 unanswered points and topping the Wildcats 28-14 in the season opener at James “Shadetree” Mathews Stadium.

“Our kids had to buy into what we’re doing and they did,” Greenwood coach William Howard said. “We want to be a physical football team and I felt like sometimes last year we weren’t that and tonight we definitely were, and I think it showed as the game kept going on.”

Franklin-Simpson, which claimed the Class 4A state title in 2017 and 2018, held a 14-7 lead over Greenwood at halftime, but the Gators used a 69-yard drive to open the third quarter and even the score at 14-all. A 35-yard pass from John Morrison to Yuji Ogawa highlighted the series. It was followed by a 9-yard run from Reed Slone to set up the touchdown run from Jonathan Gornik from a yard out.

With the score tied, the Gators got the ball back with 1:40 to play in the third quarter and used a drive that spanned until the 7:24 mark in the final frame to take a 21-14 lead. Greenwood faced a fourth-and-2 from the Franklin-Simpson 46-yard line during the drive and, after lining up, called a timeout to discuss the options available.

The Gators decided to go for it and handed the ball off to junior David Odom, who picked up the first down with an 8-yard run on the way to his team-high 96 rushing yards on 16 carries.

“I just had to execute,” Odom said. “We did all this stuff, we did all these practices and we learned all this and just executed.”

Odom was given the ball three of the next four plays, totaling 29 yards in the stretch to put the Gators on the Franklin-Simpson 10-yard line, where Morrison found Slone wide open over the middle for the go-ahead score.

“Coach Howard called the seam on both sides and I saw the safety was overplaying to the left, so I saw Reed coming with just the linebacker and I trust him more than anyone, so I knew he could beat him,” Morrison said.

Morrison completed eight passes for 138 yards in the win. Ogawa had three receptions for 90 yards and Slone finished with two receptions for 23 yards and added 48 yards on 13 carries. Christian Hernandez had 38 yards on four carries to help the balanced attack.

“(It’s) very important actually, especially the way the offense was running,” Hernandez said. “Our plays went through and our defense stopped the offense in the backfield from getting yards. We just executed the ball really well tonight.”

The Wildcats started the ensuing drive at their own 14-yard line and saw hopes of striking back fade away with a fumble that left the Gators offense 19 yards away from the end zone.

Greenwood added its fourth touchdown of the night on a 2-yard run from Gornik with 2:09 to play before holding off Franklin-Simpson for the 28-14 victory.

The Wildcats struck first in the first two minutes of the game with a 62-yard touchdown run from Chase Gooch to take a 7-0 lead.

Greenwood found the end zone for the first time with under a minute to play in the opening quarter. Cody Riney recovered a fumble at the Franklin-Simpson 15-yard line and the Gators scored four plays later on a 2-yard run from Ogawa.

Franklin-Simpson retook the lead when Leandre Stutzman returned the ensuing kick 98 yards to the end zone, making it 14-7.

The Wildcats struggled to find points from that point forward. Franklin-Simpson had 227 yards of offense, with only 32 coming through the air. Quarterback Luke Richardson completed three passes and Gooch finished with a team-high 80 rushing yards.

“Part of it – you’ve got to be honest with yourself as a coach and a team – we’re green, we’re very inexperienced, we’re playing more guys both ways and that’s something they’re not used to doing, but I just think that takes time and we’ll see how from tonight to the next one how much we can progress,” Franklin-Simpson coach Doug Preston said.

Greenwood held the Wildcats to just 47 rushing yards in the second half.

“Coach (James) Long took care of that and the defense played phenomenal,” Howard said. “We had one run they busted off a couple missed tackles and, other than that, I think they played fantastic the entire night.”

The Gators are scheduled to face Warren Central next Friday at Western Kentucky University in the German American Bank Bowl. Kickoff is scheduled for 8 p.m. Franklin-Simpson is scheduled to host Meade County at 7 p.m. in the second week of the season.

GLASGOW – The Glasgow Scotties spent the first quarter of their 2019 opener searching for a rhythm. After several throwaway possessions, head …