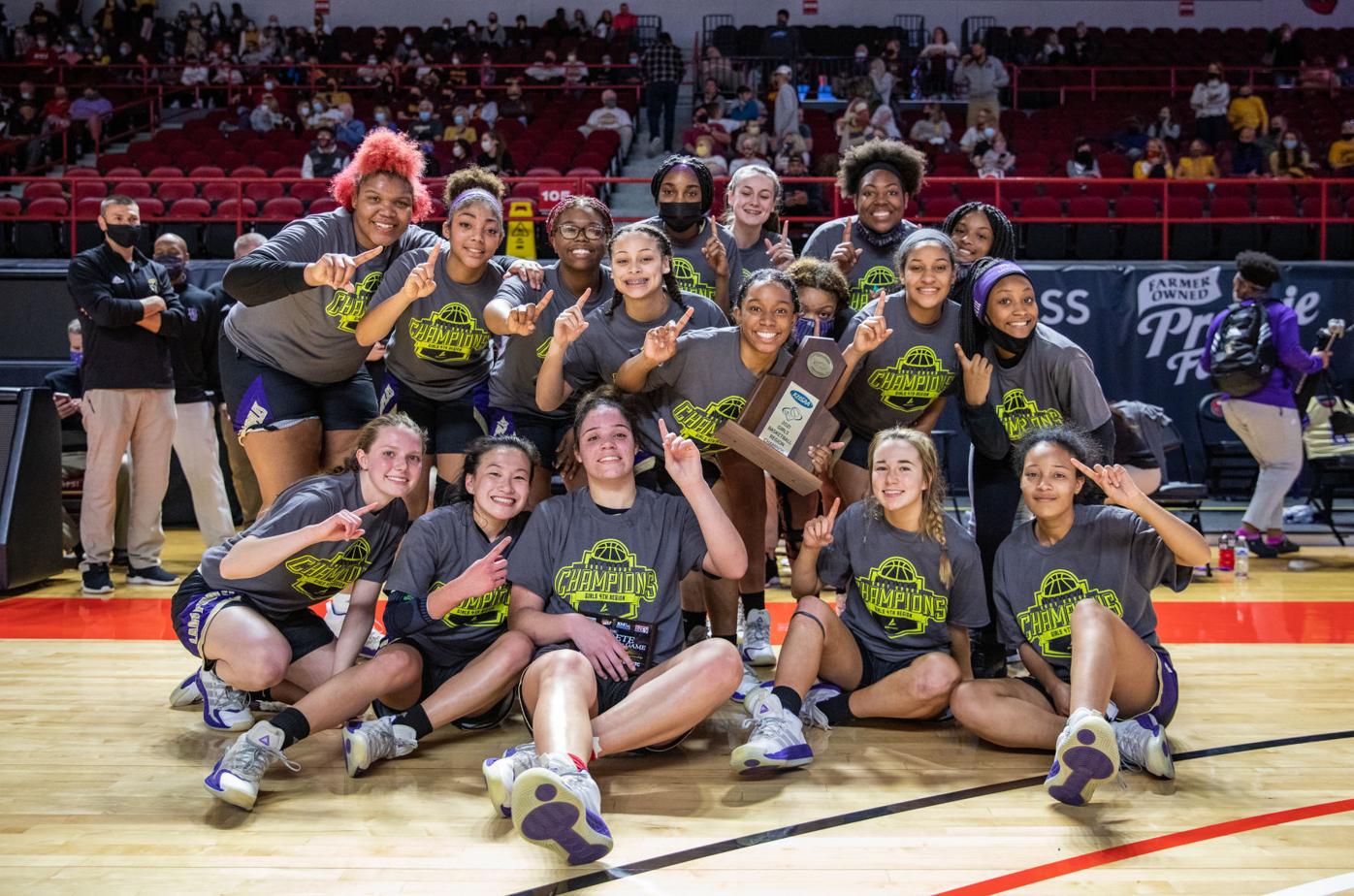 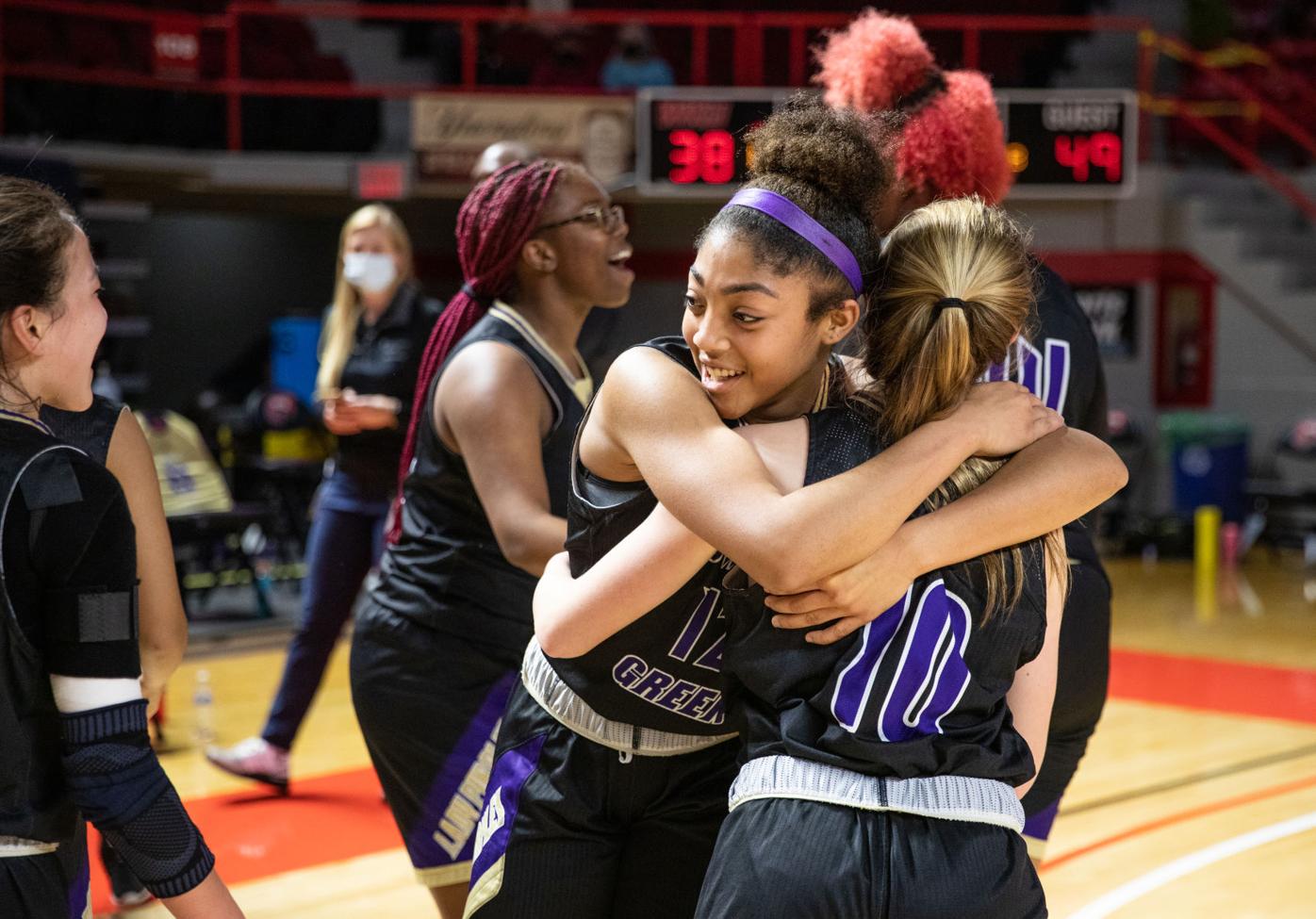 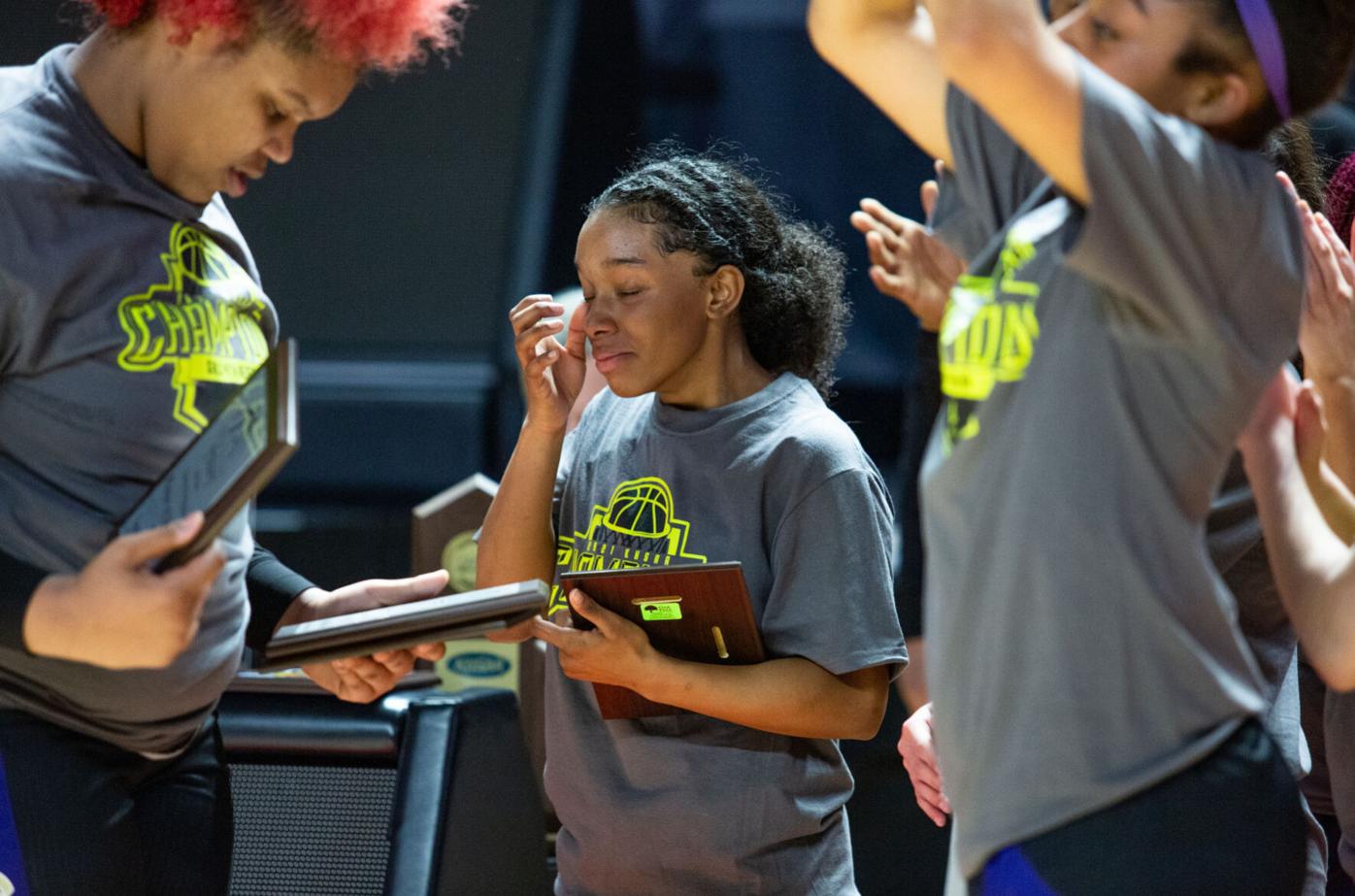 Bowling Green's Kiyah Gray wipes a tear of joy from her eye as the Lady Purples celebrate winning their second straight Girls Region 4 championship title after a 49-38 win over the Barren County Trojanettes at E.A. Diddle Arena on Sunday, March 28, 2021. (Grace Ramey/photo@bgdailynews.com) 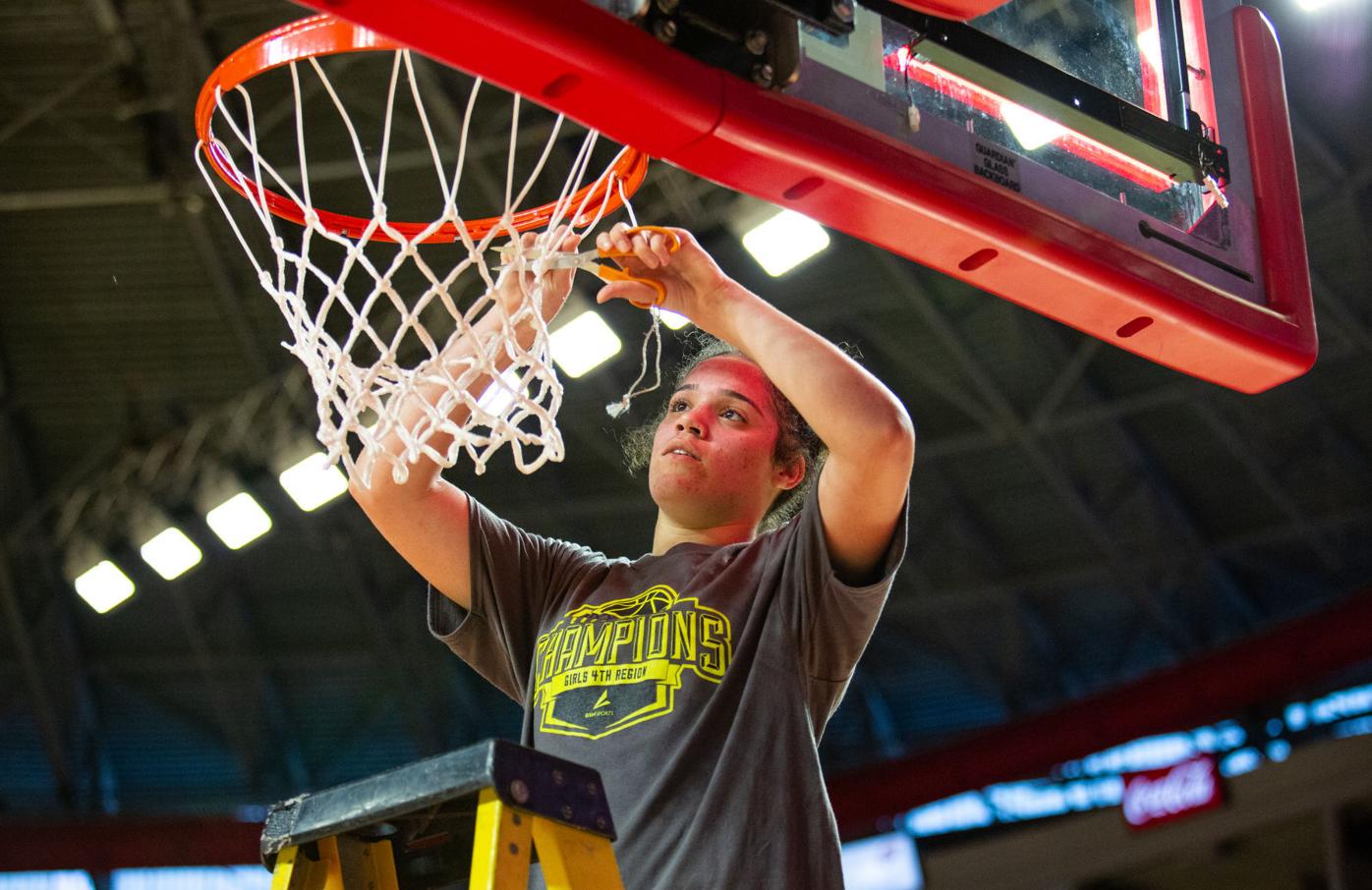 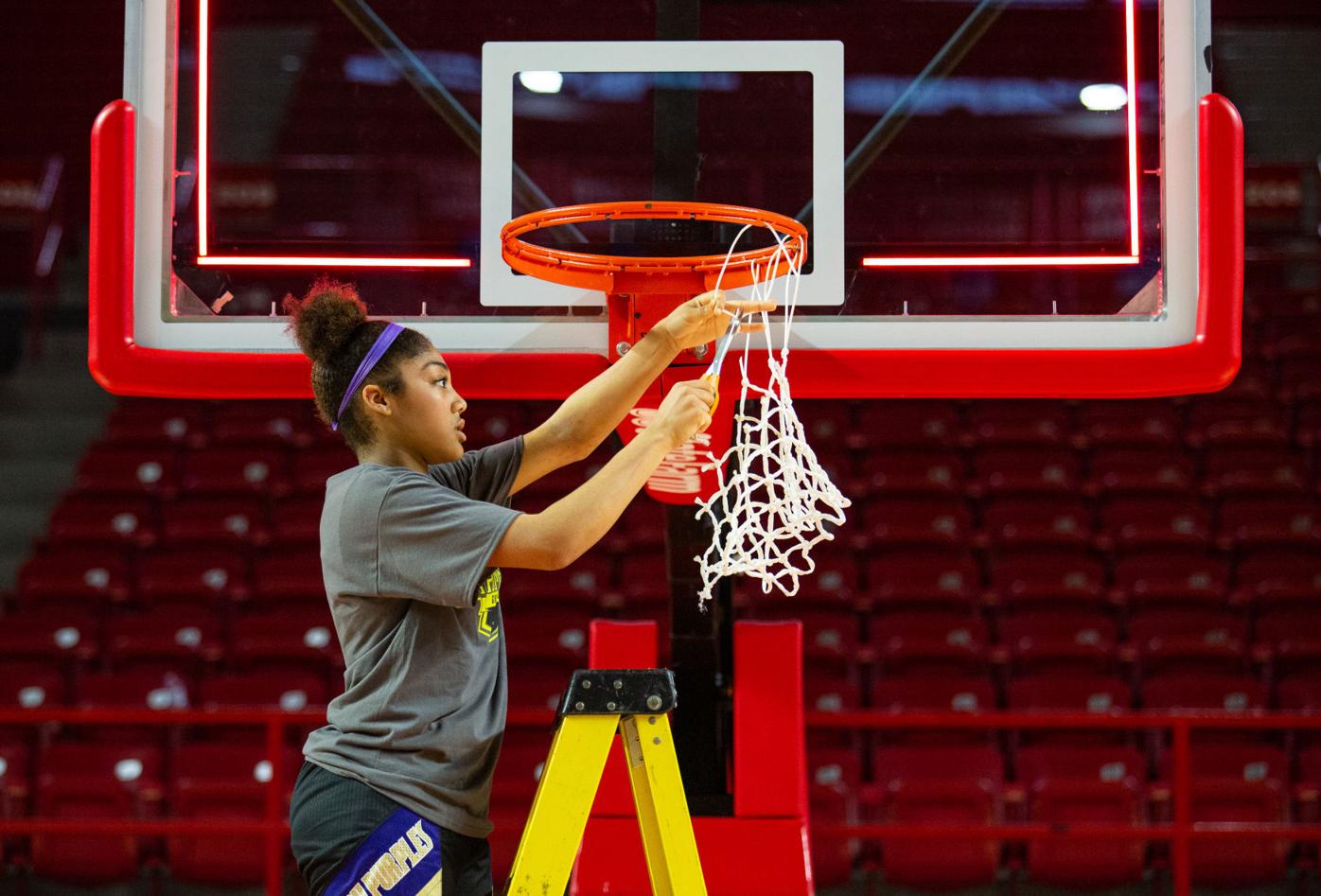 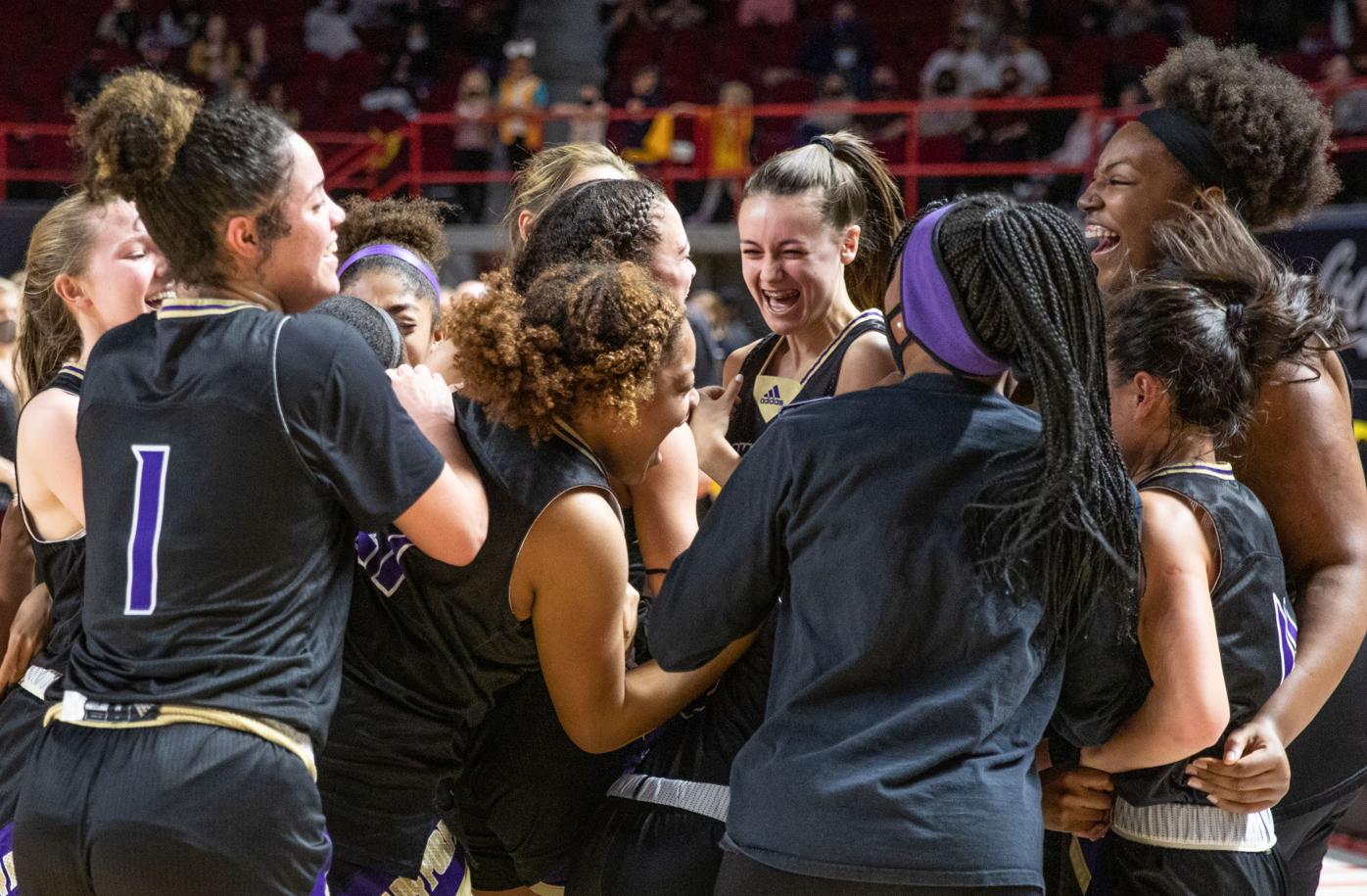 Bowling Green's Kiyah Gray wipes a tear of joy from her eye as the Lady Purples celebrate winning their second straight Girls Region 4 championship title after a 49-38 win over the Barren County Trojanettes at E.A. Diddle Arena on Sunday, March 28, 2021. (Grace Ramey/photo@bgdailynews.com)

The Bowling Green girls’ basketball team never got to take the floor after advancing to the Sweet 16 last year due to the coronavirus pandemic.

The Lady Purples will get another chance to play at Rupp Arena after beating Barren County 49-38 in the Region 4 championship Sunday at E.A. Diddle Arena.

Bowling Green (17-10) held the Trojanettes to 30.2% shooting and dominated inside with a 32-18 points in the paint advantage to win a second straight title and third region crown in four seasons.

“I’m very happy that we got to go back, because (we were) very upset last year,” Bowling Green sophomore forward Meadow Tisdale said. “It made me want to fight to get back up there. Now I am glad that we get to do this.”

“The behind-the-scenes stuff that happened this year, I don’t even have time to explain it,” Head said. “That is the most resilient group of kids that I have ever coached. Their resiliency showed tonight. Things didn’t go our way, but they kept fighting and they kept fighting. We had one thing in mind and that was to win.

“Now we get a chance to get our sneakers on Rupp Arena’s floor.”

Bowling Green clinched its spot by beating a Barren County team it was facing for a region title for a third straight season. The Trojanettes beat the Lady Purples in the season opener, but BG was able to flip the script – breaking open a tight contest late.

Barren County (20-8) got off to a hot start, building an 11-6 lead behind nine points from Abby Varney.

Trojanettes leading scorer Raven Ennis picked up her second foul with 2:22 left in the first and did not play the rest of the half. With Ennis on the bench, Bowling Green took advantage – especially in the paint, where LynKaylah James fueled a 9-2 spurt that gave the Lady Purples the first lead of the day at 15-13.

James finished the half with 12 points and six rebounds as BG went into the locker room with a 21-19 advantage.

Bowling Green started to get some distance in the third quarter, pushing the margin to seven points but Ennis got going – scoring 10 points in a stretch that allowed Barren County to pull within 33-32 with 7:18 remaining.

BG’s Tanaya Bailey would stop the momentum with a corner 3 – the only 3 for the Lady Purples all night – to start an 11-3 run that put the game away.

“I told her this morning that there is a lot of greatness inside of her and that she’s got to let it out,” Head said. “She made some outstanding plays down the stretch.”

James led the Lady Purples with 15 points and 14 rebounds, while Tisdale finished with 14 points and seven boards.

“It’s really special because we wanted to get our seniors there,” James said. “It’s our turn to win. We’re trying to get as far as we can without getting knocked off. We are going to rely on our defense and offense to get us to where we need to go.”

Kiyah Gray added nine points for the Lady Purples, who shot 43.2% despite going 1 for 14 from the 3-point line.

“It’s really emotional,” the senior guard who missed most of last season with an injury said. “Winning it as a senior is very different than winning it as a freshman, sophomore or junior.”

Varney led the Trojanettes with 13 points, while Ennis added 11 points.

“We missed some shots late in the third and fourth quarter that I think could have made a difference, but I thought we executed the game plan perfectly,” Barren County coach Piper Lindsey said. “They hit one 3 and that was (the plan). We were going to pack it in as best as we can. We played some zone and that is something we don’t usually do. We were going to try to do whatever it took, but we fell short.

Bowling Green will face the Region 10 winner in the opening round of the Girls’ Sweet 16 on April 7 at 1 p.m. CDT at Rupp Arena in Lexington. The Region 10 championship will be decided Tuesday.

“We need that time, honestly, to rest and recuperate,” Head said. “The other thing is, we need that time to prepare. We know the team coming out of the 10th is going to be very, very tough. We are excited. We will get a chance to prepare and go forward.”

The Lady Purples won their second straight Girls Region 4 championship title after a 49-38 win over the Barren County Trojanettes at E.A. Didd…