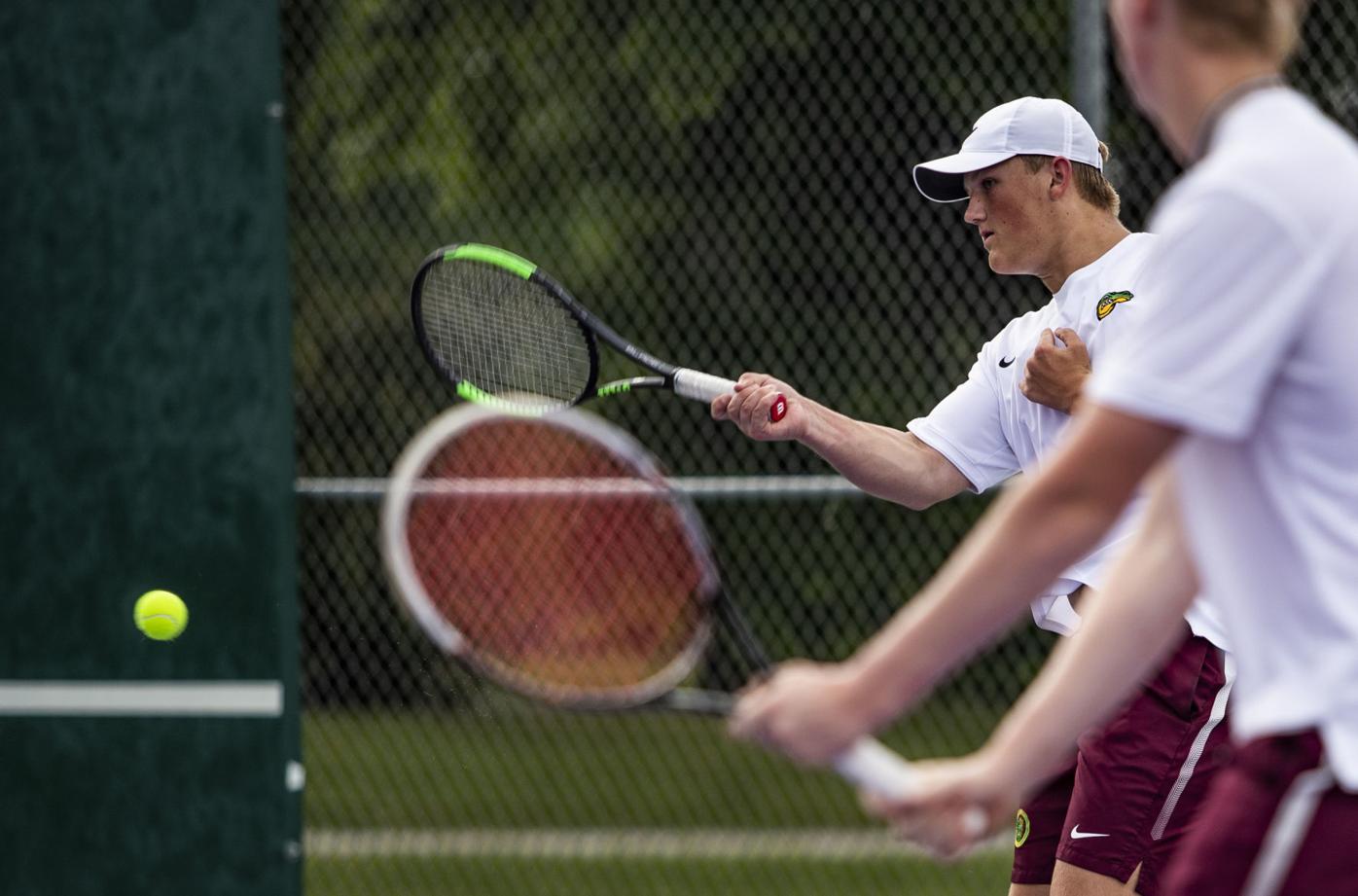 Greenwood’s Parker Young hits a forehand May 15, 2019, during the Region 4 tournament at Kereiakes Park. 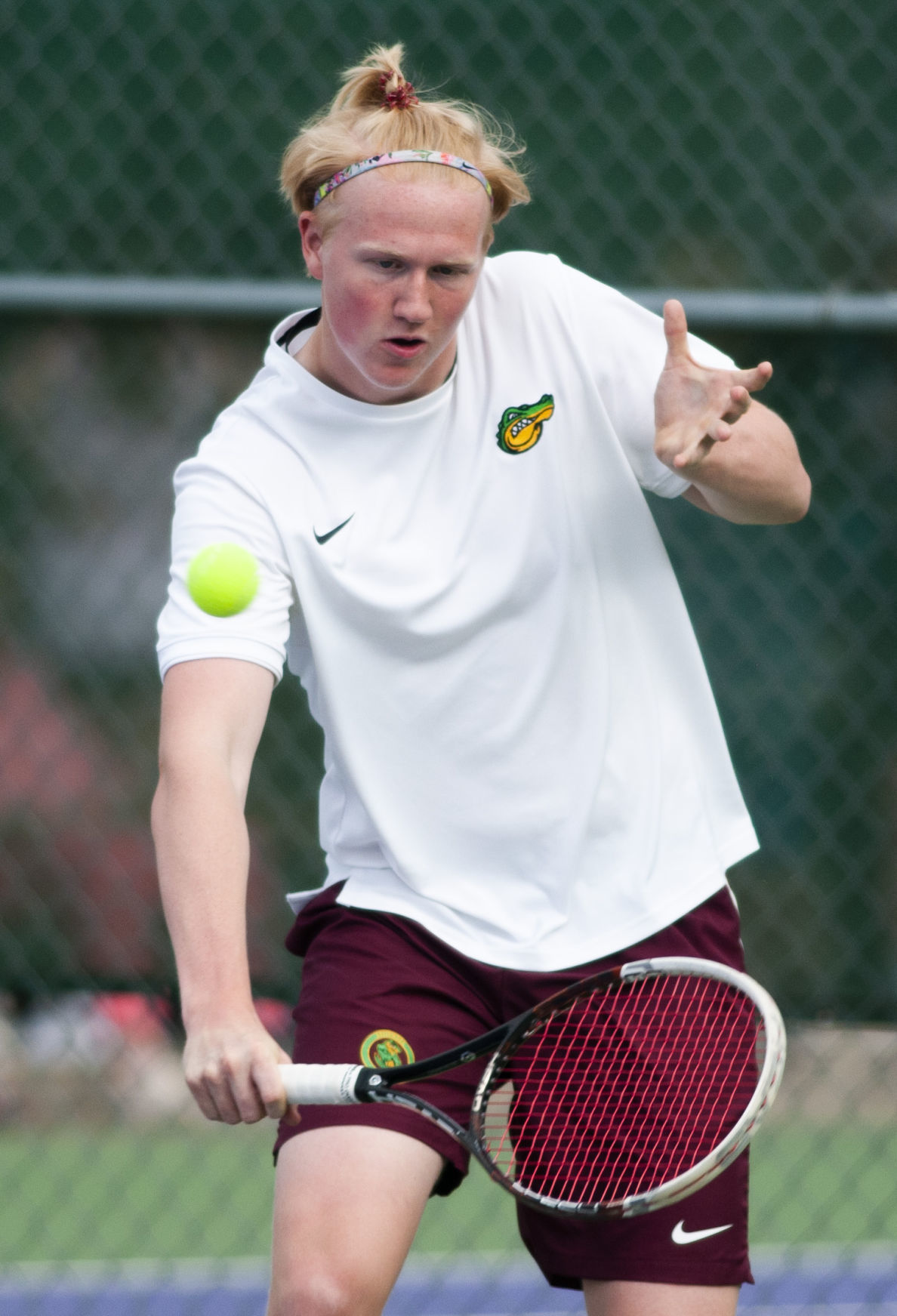 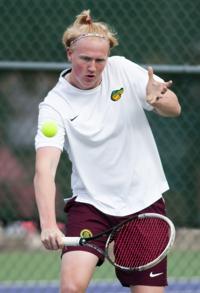 Greenwood's Landon Gann hits a backhand during the Region 4 tournament on Wednesday, May 15, 2019, at Kereiakes Park. (Austin Anthony/photo@bgdailynews.com) 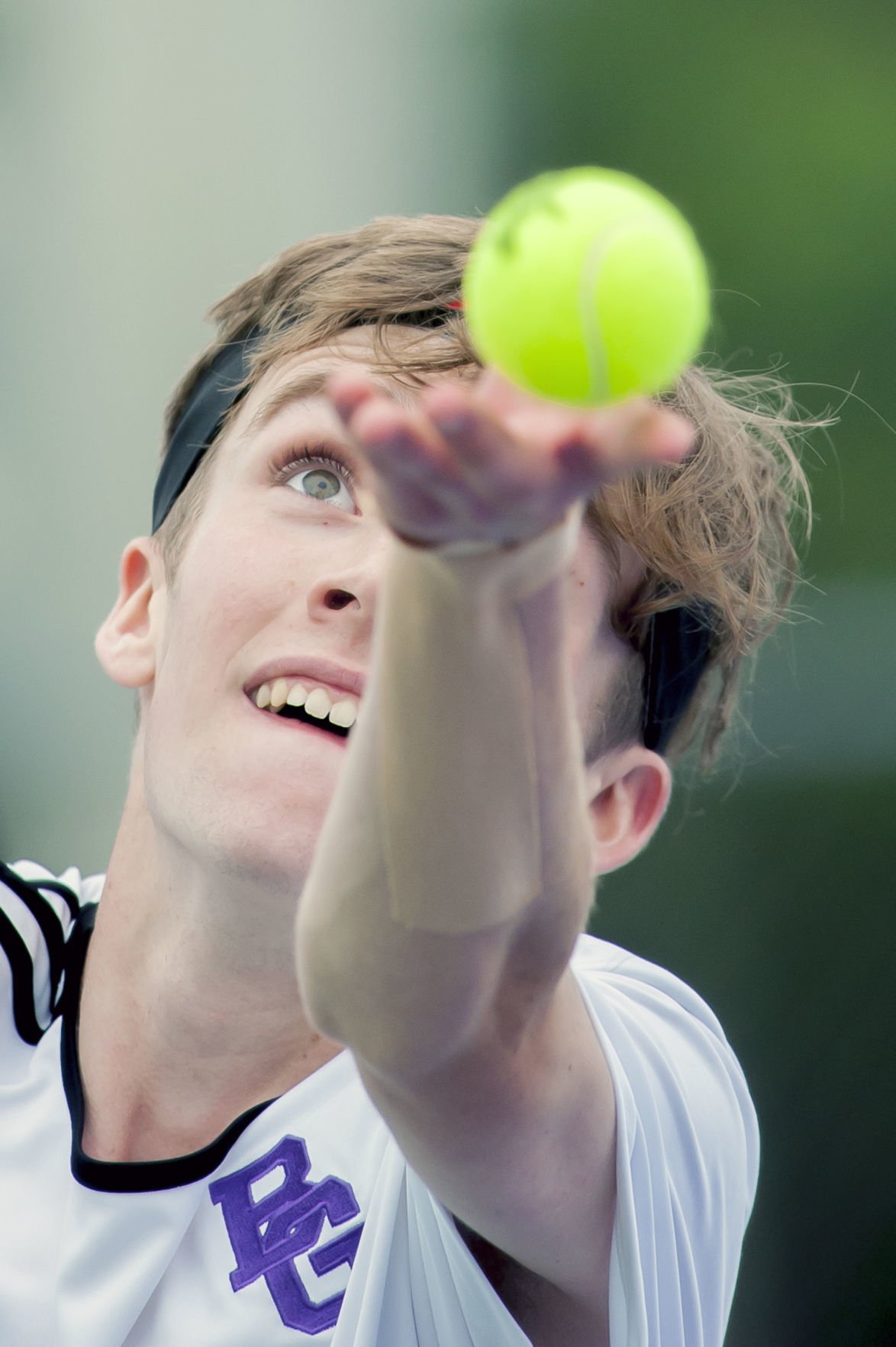 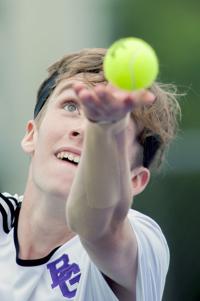 Greenwood’s Parker Young hits a forehand May 15, 2019, during the Region 4 tournament at Kereiakes Park.

Greenwood's Landon Gann hits a backhand during the Region 4 tournament on Wednesday, May 15, 2019, at Kereiakes Park. (Austin Anthony/photo@bgdailynews.com)

Landon Gann and Parker Young will leave Greenwood High School as the defending Region 4 boys’ tennis doubles champions, but neither senior expected their careers to end this way.

Gann and Young won that Region 4 championship as juniors, and were looking forward to the opportunity to defend their title as an experienced doubles team expecting to again win and advance to the state tournament. Instead, the coronavirus outbreak struck and derailed the spring sports season before it started to bring an abrupt and unexpected end to their long partnership for the Gators.

“We were hoping to play all season and just get better as the season went by, but after last year we were feeling pretty confident,” said Gann, who combined with Young to win two matches and reach the Round of 16 at last year’s KHSAA State Tennis Tournament in Lexington. “After last year’s state result, we talked about it and realized we need to work on some stuff. But we’ve been best friends for a while, so we have pretty good chemistry on the court and communication, and that helps.”

Young thought he and Gann could’ve matched or even improved on last season’s showing, but has already moved on and is looking forward to college at Western Kentucky where he plans to be roommates with Gann.

“I’ve basically accepted it,” Young said. “I wasn’t really too down about this whole situation, really. I’m kind of the type of person where I think the world’s still going to spin, even if I don’t have a tennis season.”

Greenwood’s boys’ team also retains its title as the defending Region 4 team champion, something the Gators have accomplished for seven straight years. Whether or not it would have been eight straight is open for debate, but coach Tim Dethridge liked the group he had coming back even with No. 1 singles player and three-time regional champion Jacks Lancaster likely opting to sit out this season to focus on his game.

Had Lancaster opted to return this year, it could have set up a potential third consecutive Region 4 championship match against Bowling Green junior John Guthrie.

“He was looking really good,” Purples coach Dax Evans said of Guthrie. “He’s been training really hard during the offseason. I think he was poised to have a really good run again this year. I think he would have built off his Sweet 16 run last year he had as a sophomore. He’s bigger, he’s stronger, just getting more aggressive.”

The battle for the boys’ team title likely centered on the Gators and Bowling Green. Greenwood had Gann and Young at No. 1 doubles, with teammates Dylan Dethridge – who teamed with graduate Will Parks to reach the regional finals last year – and Landon Trinh challenging for that championship. The Gators had additional experience in seniors Lucas Trinh and Richard Chen, who also missed out on playing their final season for the Gators.

“We’ve got some young players on that side as well,” Tim Dethridge said. “I was wanting to see what they could do once they were thrown into varsity action. We had a tremendous schedule, probably the toughest schedule we’d ever had, this year. We had a trip down to (DecoTurf), the tennis championships down in Chattanooga, playing teams from Florida, Georgia, West Virginia, Missouri, Texas, Louisiana – basically all over the south. And then of course we were in the Kentucky Duels at St. X, then had a couple big tournaments here with teams coming in. So we really hate that we missed out on all that.

“The kids really worked all summer and all fall, then about the time when it was about to start and you could go out and see what you’d done and what type of improvements you’d made, basically they weren’t allowed that opportunity. We understand that completely – everyone’s health is more important. Tennis will be there, but I just hate it for the kids who’d put so much work and so much time in.”

Young was looking forward to helping make it eight straight regional titles for the Gators this year.

“We planned to win our eighth in a row after last year, but it just got cut short,” Young said. “We knew we had a pretty good chance of winning it again this year.”

The Purples missed out on a chance to end Greenwood’s long string of dominance this year, and will lose a pair of seniors in No. 2 singles player Ronit Patel and Cole Rubin.

Greenwood’s girls’ team, winners of four straight Region 4 titles, still looked to be the favorite in a more open field this year with Bowling Green and South Warren – which would have entered the year without the graduated regional doubles championship duo of Sydney Cassady and Natalie Noble – among the teams looking to end the Lady Gators’ reign.