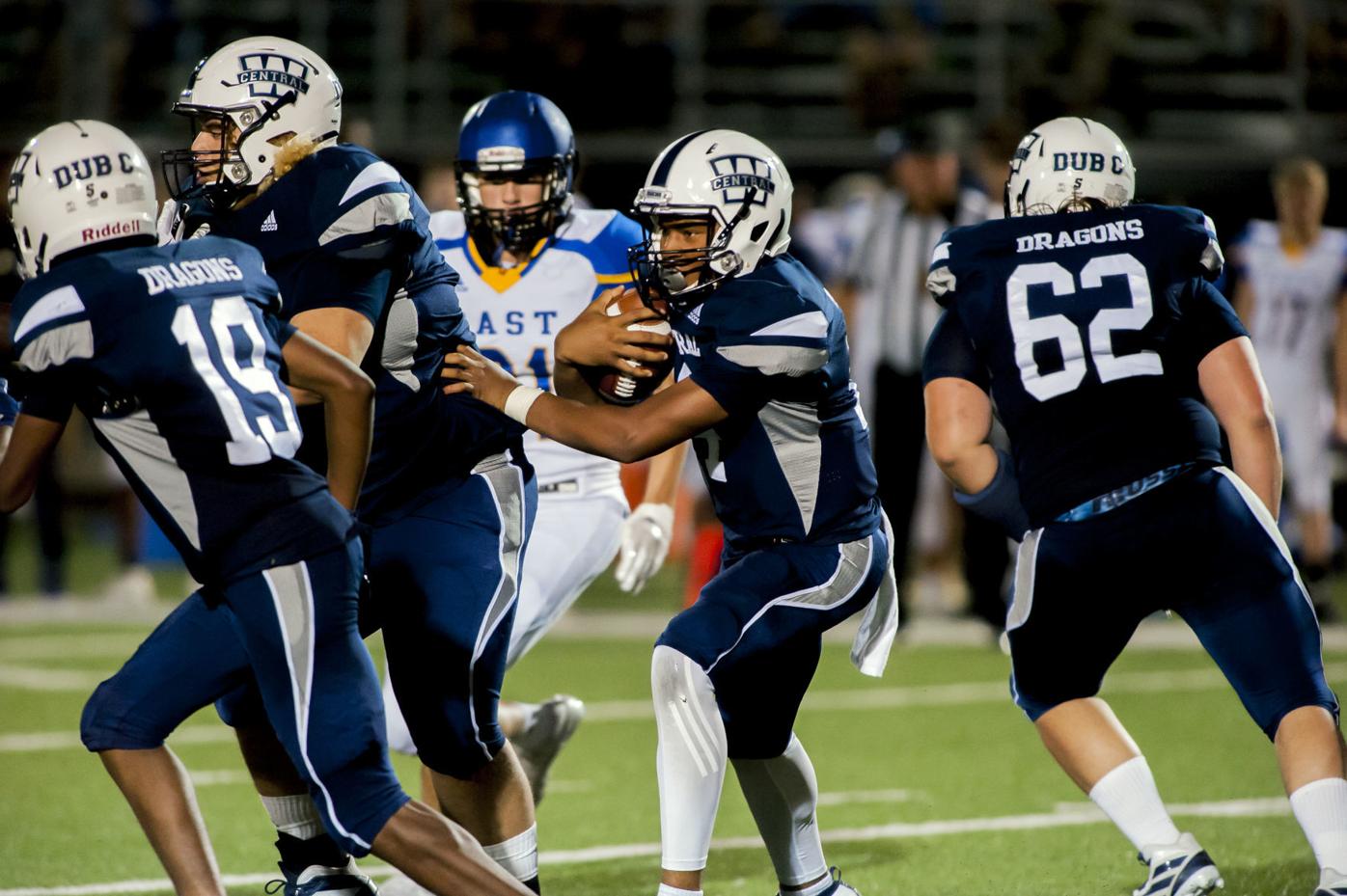 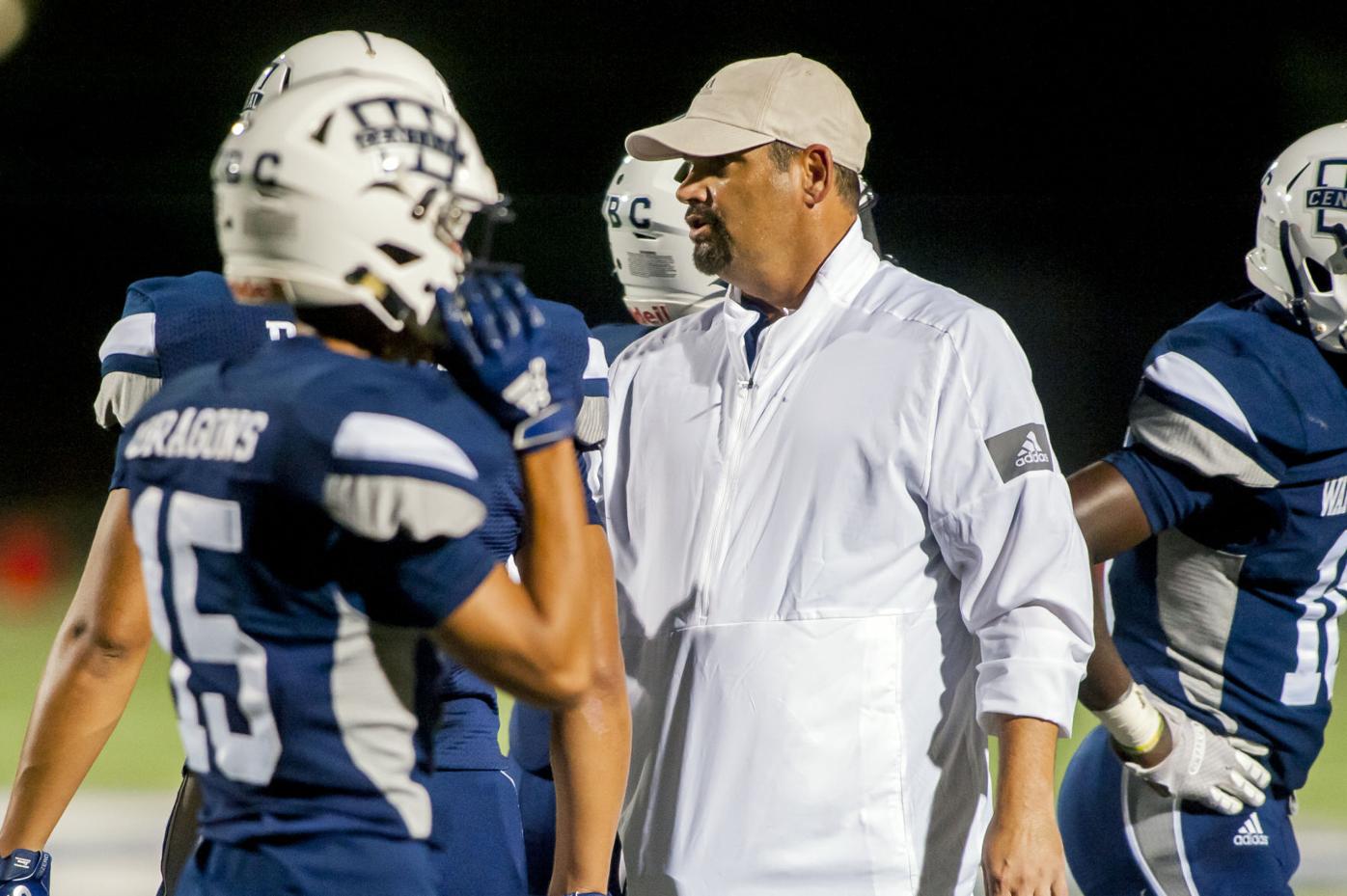 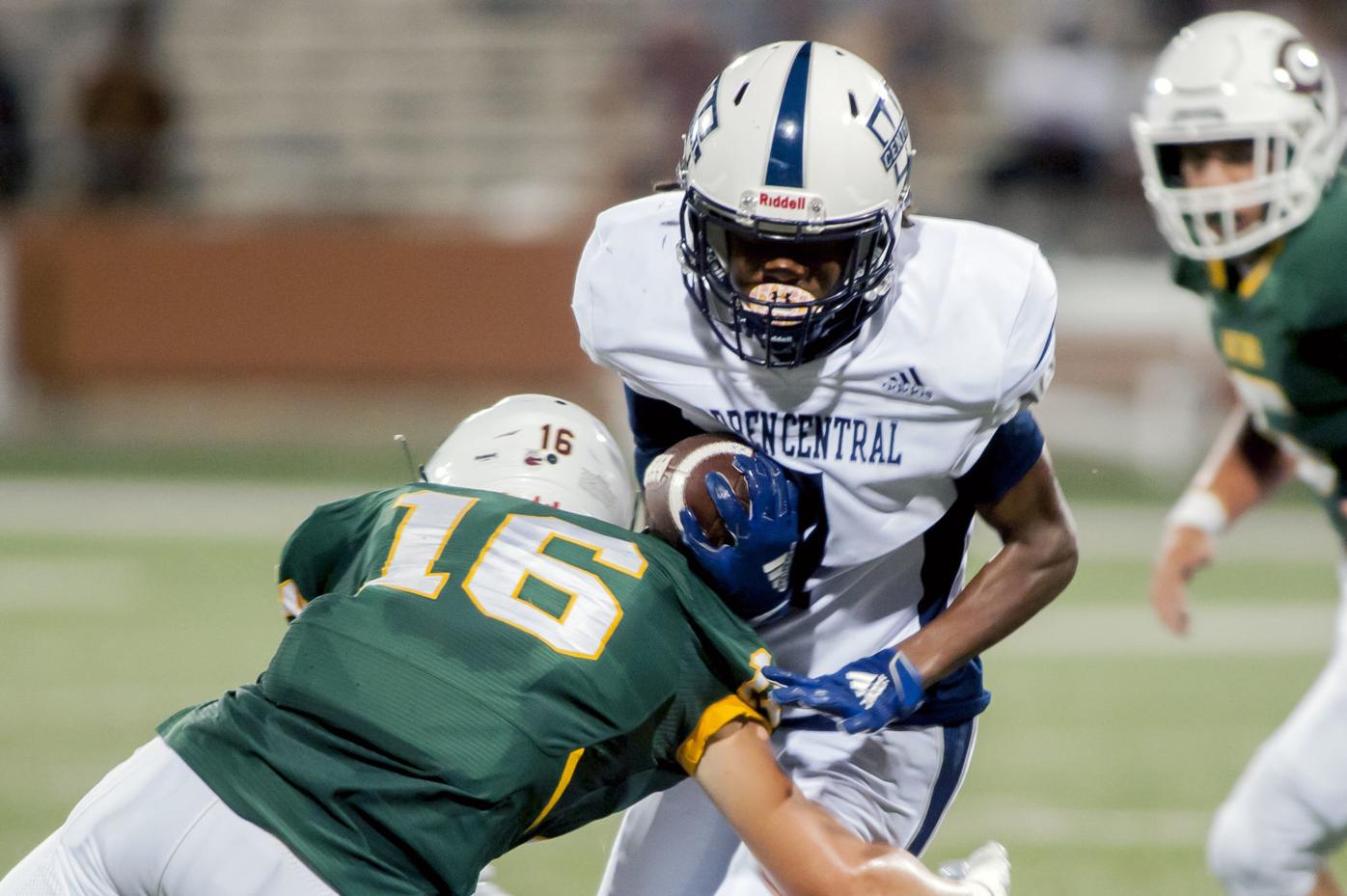 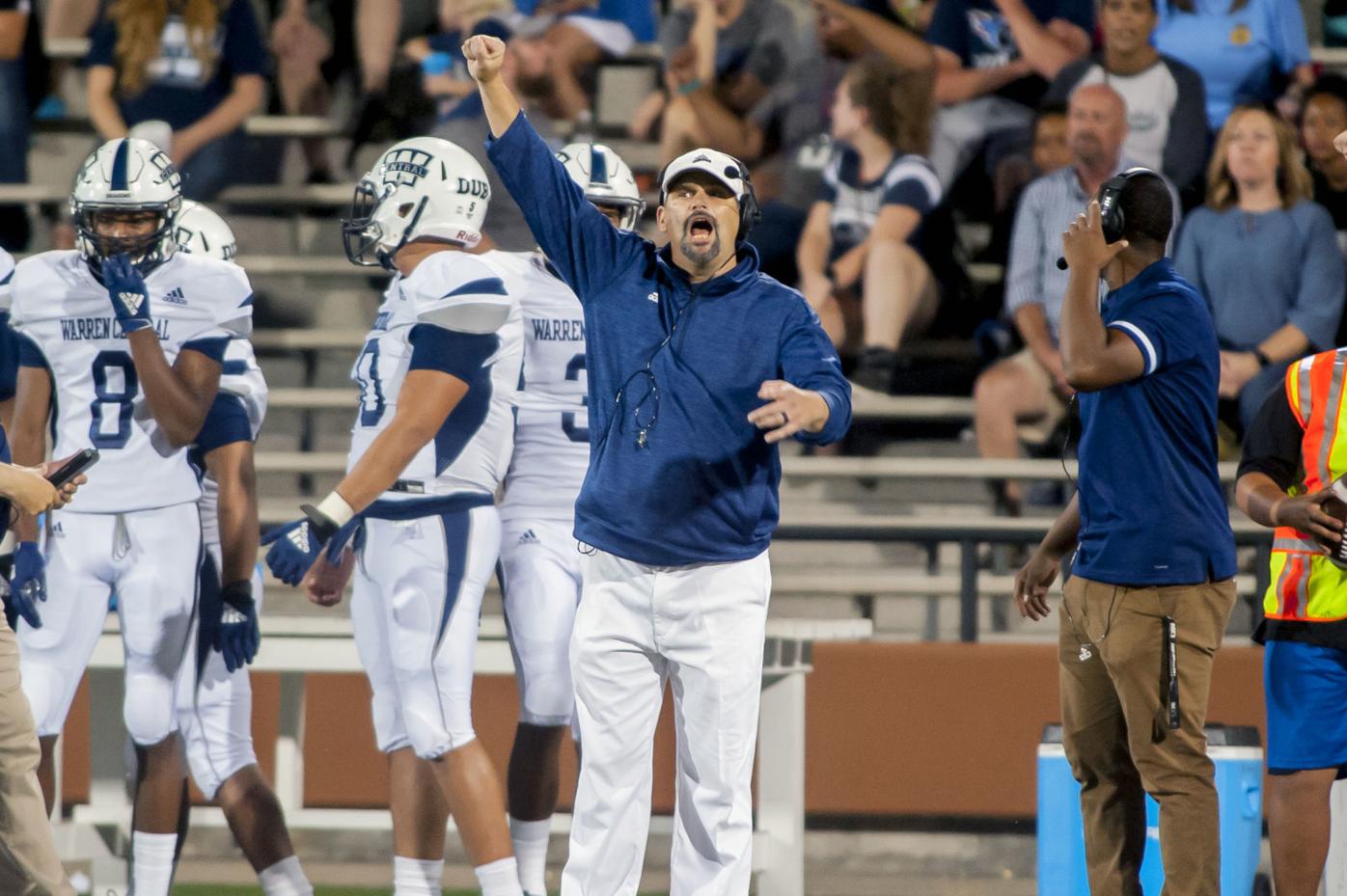 Cary Fowler inherited a program struggling to find wins when he took over as Warren Central’s head coach last season. The Dragons hadn’t won since 2015, and even though they didn’t last season, either, there were steps taken in building the program back up.

Warren Central saw more competitive games than it had in previous seasons and Fowler is working on getting more players in the program. But while reaching for those goals, the Dragons also want to win games in 2020.

“Our first goal is to win a game,” Fowler said in a phone interview with the Daily News. “ ... I look at the schedule, and I’ve said this before going back to last year – the things I wanted those guys to be able to do was not to surrender. Just don’t look at the scoreboard. Just keep playing, and we were 6-4, because there were six times that we fought to the very, very end. There were four times that we didn’t, but it was that mentality.”

Warren Central graduates a large senior class that included Dre Boyd, who started the season as the team’s quarterback before an injury sidelined him, but many of those seniors were first-year players. The Dragons were still young and struggled to escape the injury bug. They’ll return several pieces, including leading rusher Deangelo Patterson and Trenton Leach, who took over at quarterback. Patterson was a freshman and Leach a sophomore.

Fowler credits previous head coach Joel Taylor for keeping the program together as the Dragons continue to take the necessary steps to winning again.

“I’m trying to build. He held this program together. There would not be a program without him,” Fowler said. “When you’re trying to get kids out and you’re just trying to have a team – there’s steps that will be taken.”

The Dragons played some close games early at Apollo and versus Greenwood last fall, before closing 2019 with a one-touchdown loss against Russellville. Warren Central is on a 45-game losing streak – the longest current streak in the state belongs to Shawnee at 55 games – but will aim to turn those close games into wins, while also having better showings in Class 4A, District 2 play with hopes of playing in November, where Fowler believes his team would be able to make a run.

“I think we can shock some people in the playoffs. That’s our goal,” Fowler said. “I tell them all the time, ‘They remember in November. You’ve got to make them remember.’ “

Here’s a look at the Warren Central’s 2020 football schedule:

The Eagles, who moved from 5A to 6A, had 343 yards rushing, with Harold Hogg going for 192 and three touchdowns on 26 attempts. Damian Lovinsky also ran in three touchdowns, while throwing for 132 yards and two touchdowns on 11-of-19 passing. Both were juniors. Apollo finished 4-7.

Boyd threw for 473 yards and five touchdowns, and added 157 yards and three touchdowns rushing. The Dragons had 208 yards on the ground, with Patterson collecting 56.

The Spartans have won all five meetings in the series, including a 53-14 decision last season. South Warren, which went 10-2, ranked fourth in the Class 5A AP poll when the teams met and finished fifth.

Warren Central had -24 yards rushing in last year’s loss against a South Warren team that allowed just 54 yards rushing per game. Caden Veltkamp threw for 125 yards and four touchdowns – two to Jason Putman – on 5-of-8 passing, and Kobe Martin led the run game with 93 yards and two touchdowns on nine carries. Veltkamp and Martin were part of a deep sophomore class, while Putman was a junior, along with Jantzen Dunn – one of the top-rated defensive backs in the state who committed to Ohio State earlier this month.

Leach threw for 169 yards on 9-of-30 passing with two touchdowns and an interception.

The two programs have met at least once each season since 1974. The Purples lead the series 40-12 and have won 11 straight games against the Dragons. Bowling Green has allowed just one touchdown in the last four meetings.

The Dragons were limited to 109 yards of offense in last year’s 56-0 loss. Bowling Green intercepted four passes. Patterson had 38 yards on eight attempts.

Junior quarterback Conner Cooper had 128 yards and two touchdowns on 5-of-7 passing. Sophomore Dezmond Wilson led receivers with 107 yards and two touchdowns on six receptions. The Purples also return leading receiver Jordan Dingle and leading rusher Javeius Bunton, among other pieces along the line and on a defense anchored by leading tackler Rece Jones. Bowling Green went 9-4, finished sixth in the Class 5A AP poll and claimed the Class 5A, District 2 title before finishing the year in the state semifinals.

Warren Central leads the series 19-8, but has dropped five straight meetings with the Gators, including a 59-42 decision in last year’s German American Bank Bowl. It was part of Greenwood’s first 4-0 start since 2012. The Gators finished the year 5-6.

It was a three-point game at halftime last season, but the Gators outscored Warren Central 22-0 in the third to pull away. John Morrison threw for 140 yards on 5-of-15 passing, with a touchdown and interception, while the Gators’ run-heavy offense rushed for 344 yards. Reed Slone and David Odom had 132 and 131 yards, respectively, with three touchdowns each, and Christian Hernandez had 72 yards and a score. Morrison, Odom and Hernandez return.

Boyd had 406 yards on 28-of-44 passing, with five touchdowns and three interceptions. He also ran for a touchdown. Patterson led the team with 93 yards rushing.

Allen County-Scottsville’s 47-38 win last year was its first victory of the season. Junior Trace McIntyre threw for 149 yards and a touchdown, and also rushed for three scores. The Patriots finished with 273 yards rushing, led by 119 and a touchdown from junior Landon Witcher. The Patriots also return leading receiver Jax Cooper, who picked up his first Division I offer from Morehead State earlier this year. The Patriots went 5-7 last season.

Boyd finished with 449 yards and four touchdowns on 26-of-38 passing, and also had 60 yards and a score on the ground. Leach completed all three passes he attempted for 38 yards and Patterson rushed for 52 yards.

Leach moved into the starting quarterback spot in last year’s 51-22 loss at Russell County. He had 252 yards on 17-of-31 passing, with three touchdowns and interceptions, but the Lakers held the Dragons to -2 yards rushing on 15 attempts.

The last time Warren Central won a football game was Oct. 16, 2015, when it beat the Raiders 23-12. The Raiders have won the last four meetings with Warren East, but Warren Central leads the series 30-10-1.

Warren East’s 53-12 win over Warren Central last year was the Raiders’ last win in a 4-7 season. Nolan Ford threw for 148 yards and three touchdowns on 10-of-14 passing and added 131 yards and a touchdown on the ground. Warren East also returns leading rusher K.J. Alexander and leading receiver DeSean Gilbert.

Leach had 195 yards on 18-of-35 passing, with a touchdown and interception. The Raiders held the Dragons to 28 yards rushing.

Doug Preston’s Wildcats have been the team to beat recently in Class 4A, District 2 – the Class of 2020 never lost to a district opponent – but that group is gone, as is Preston, who resigned earlier this year to take the job at John Hardin. Max Chaney was promoted to head coach in March.

Junior Jordan Page rushed for 147 yards and two touchdowns on 32 attempts for the Falcons. John Petett will return as Monroe County’s head coach. Petett spent the previous four years as an assistant, after serving as head coach from 2004-15. Monroe County went 5-6 last season.

Warren Central held a 20-6 lead at the end of the first quarter in the 2019 meeting, but Russellville outscored the Dragons 21-0 in the second quarter and neither team scored again after halftime.

Leach and senior Justin Borden split time at quarterback. Borden had 81 yards on 11-of-17 passing, with a touchdown and interception, and Leach threw for 63 yards on 8-of-15 passing. Borden added 115 yards and two touchdowns on 21 carries, and Patterson caught the touchdown pass on one of his 10 receptions.