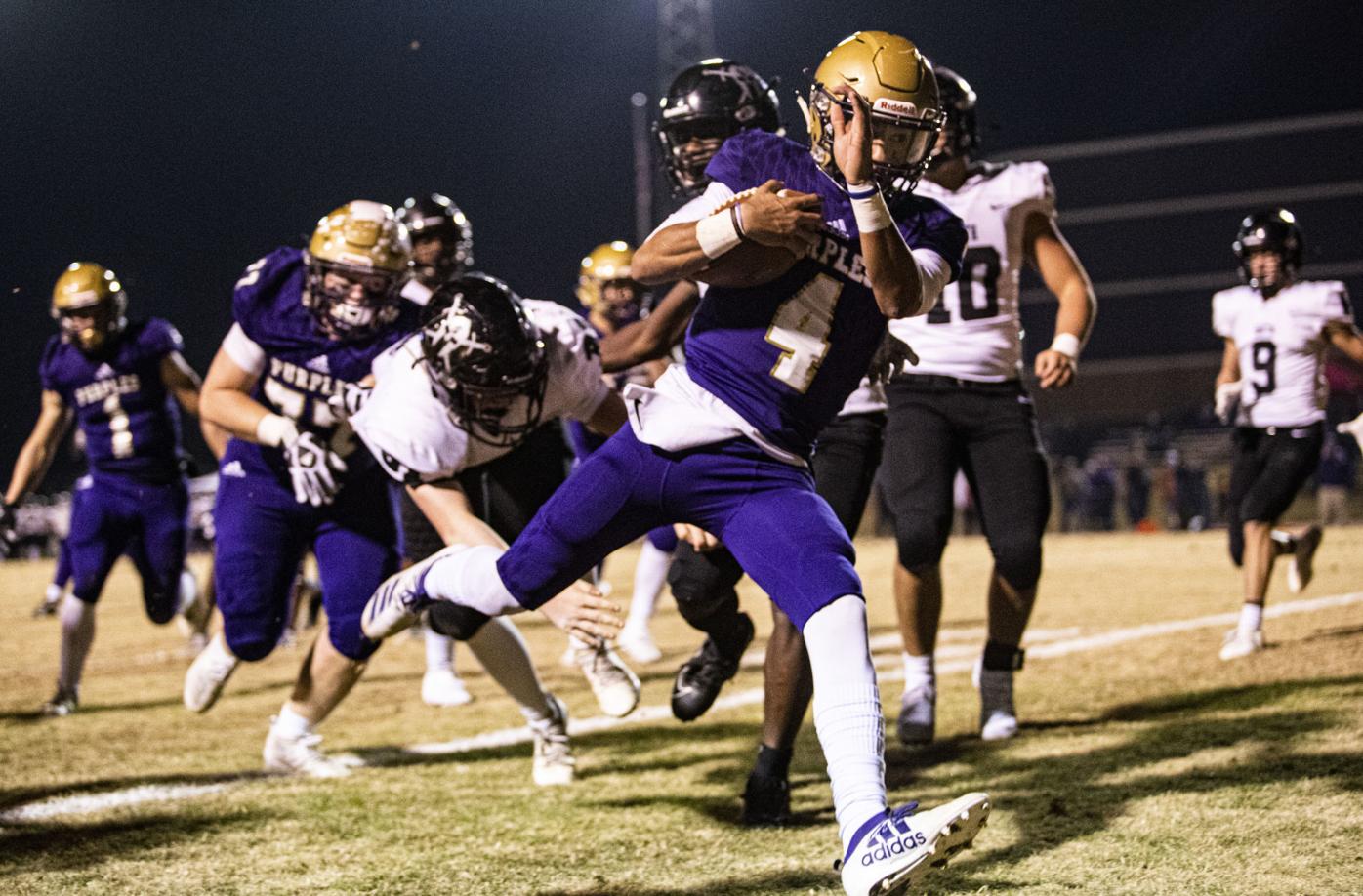 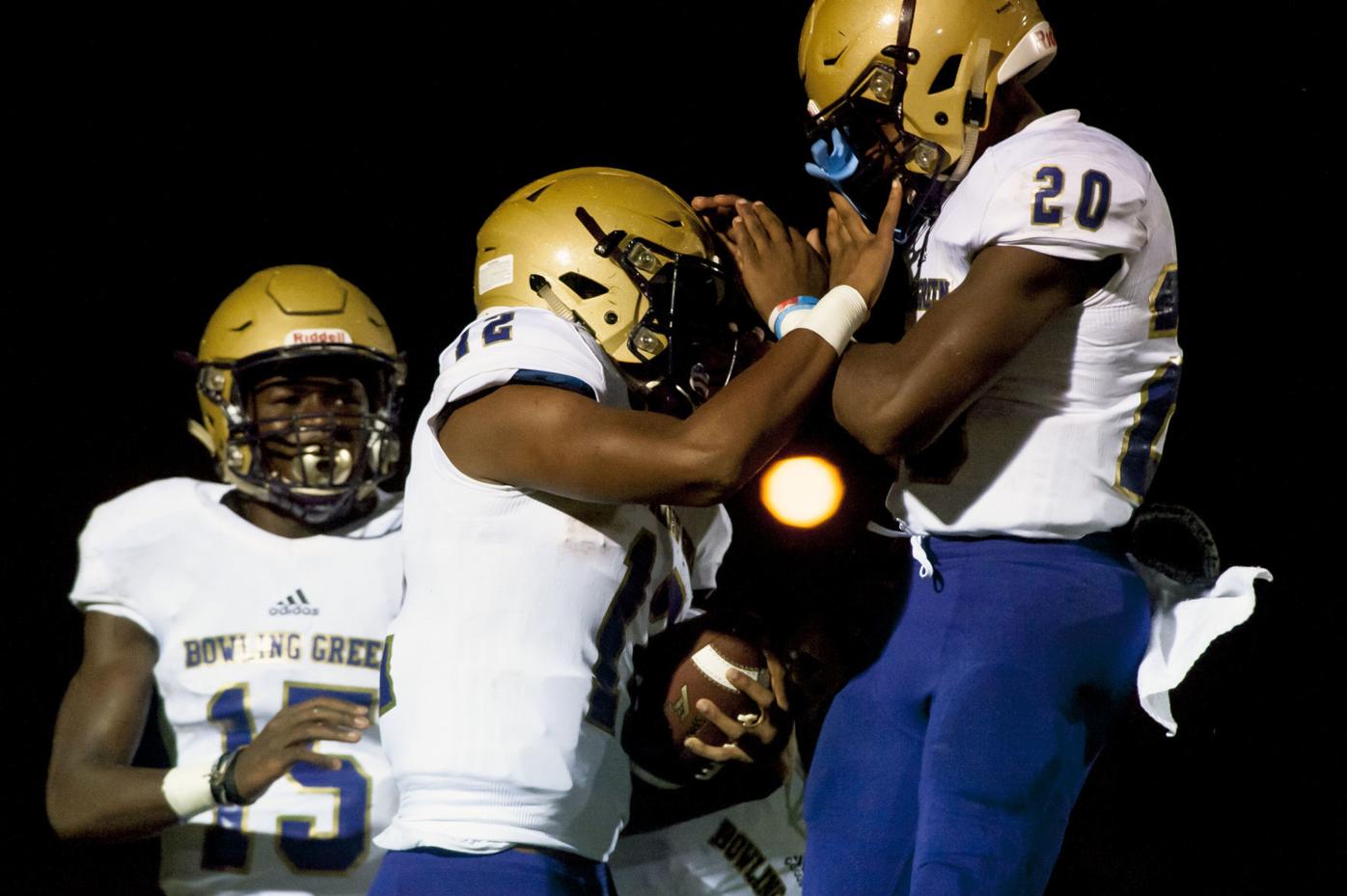 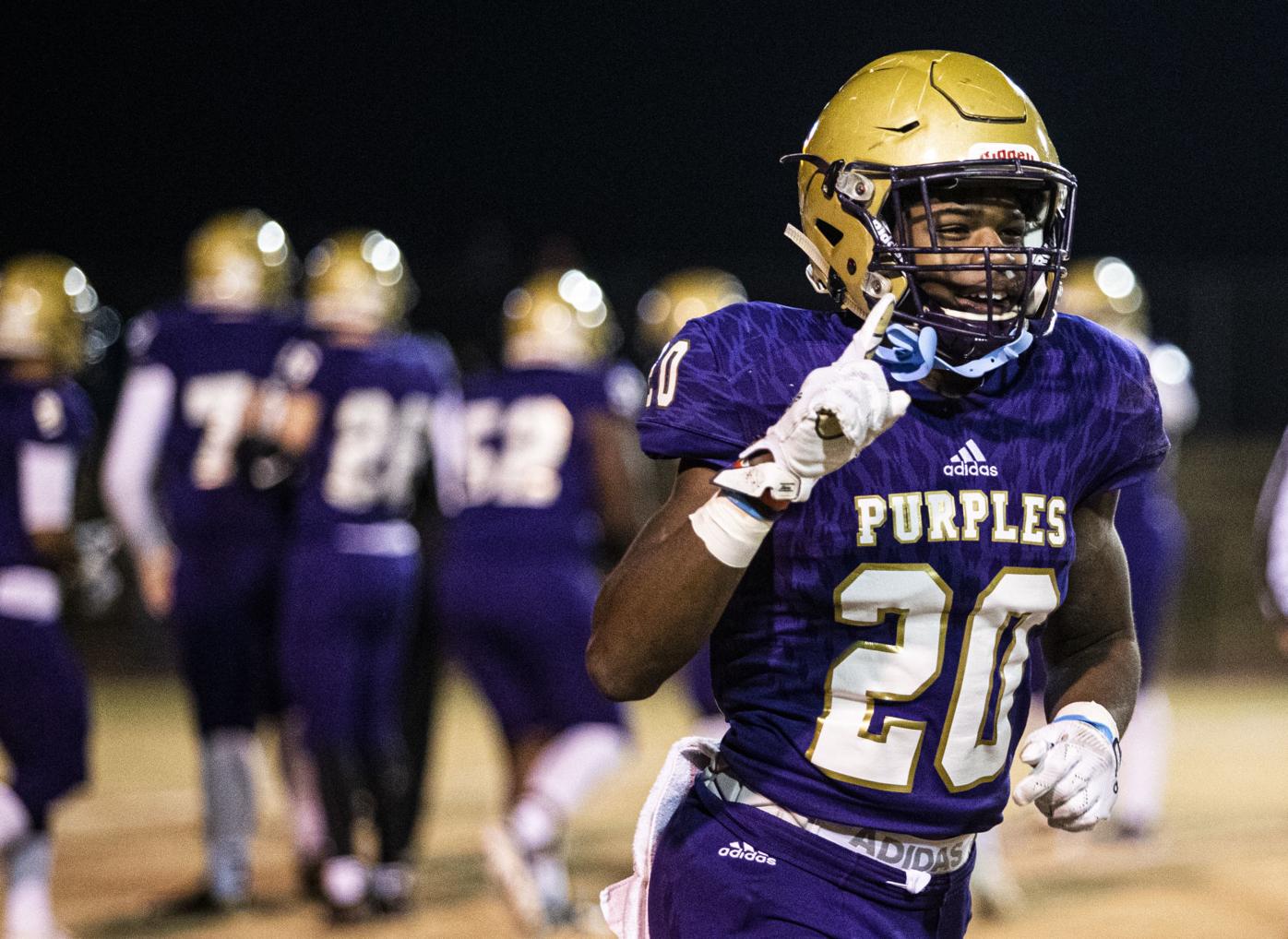 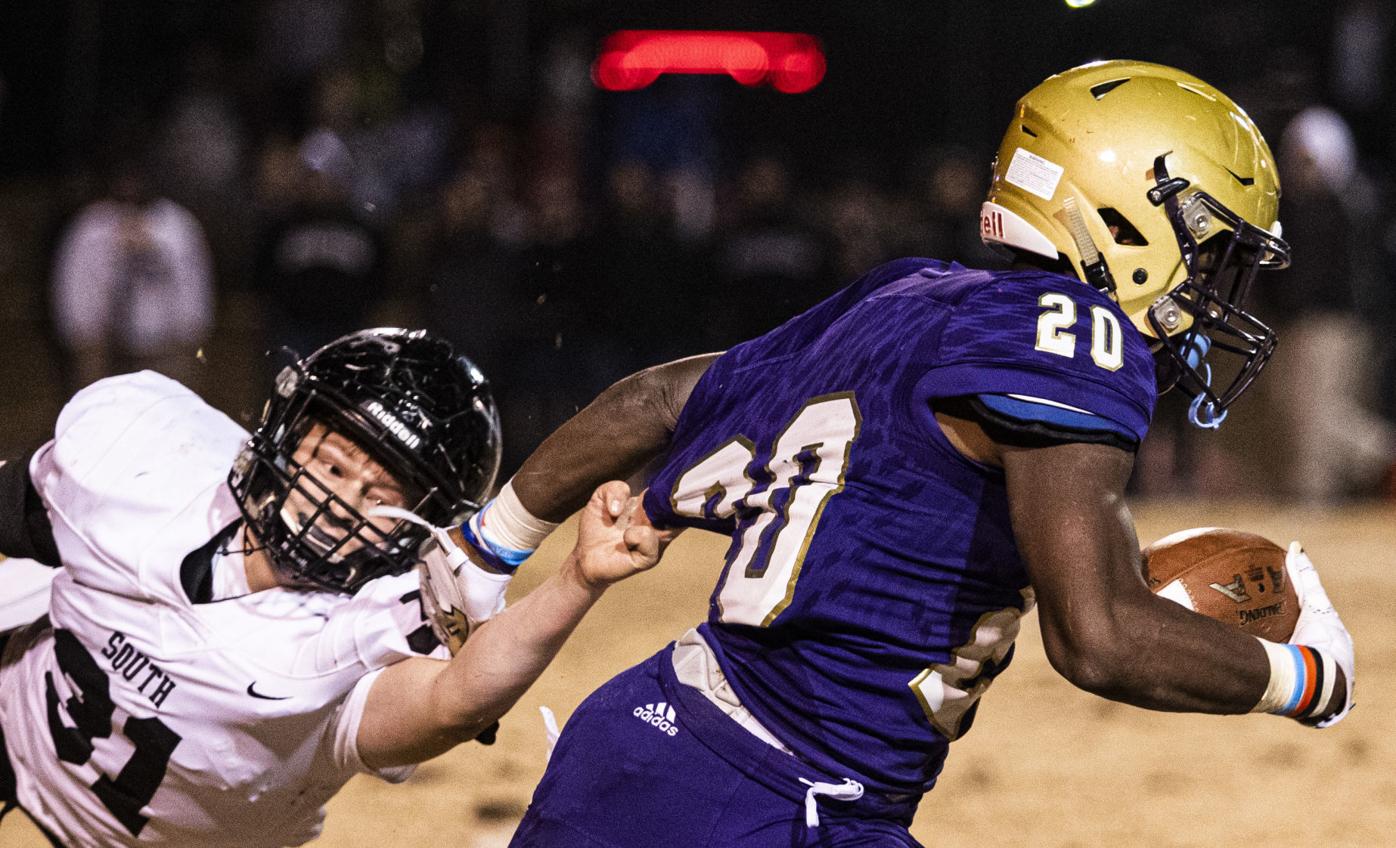 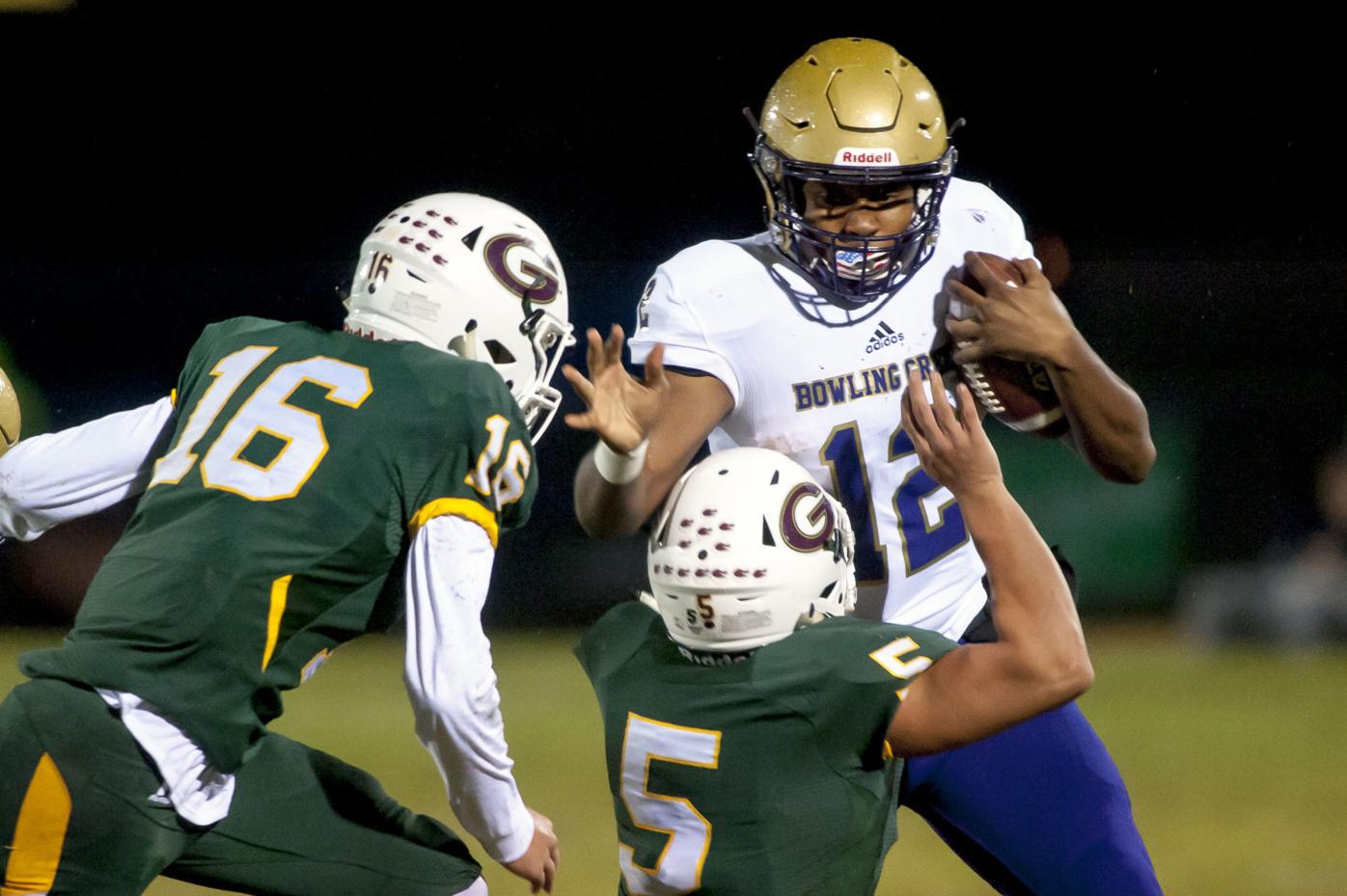 Bowling Green’s Jordan Dingle (from right) looks to get past Greenwood’s Sebastian Conwell and Lofton Howard on Oct. 25 during the Purples’ 39-0 win at Greenwood High School. 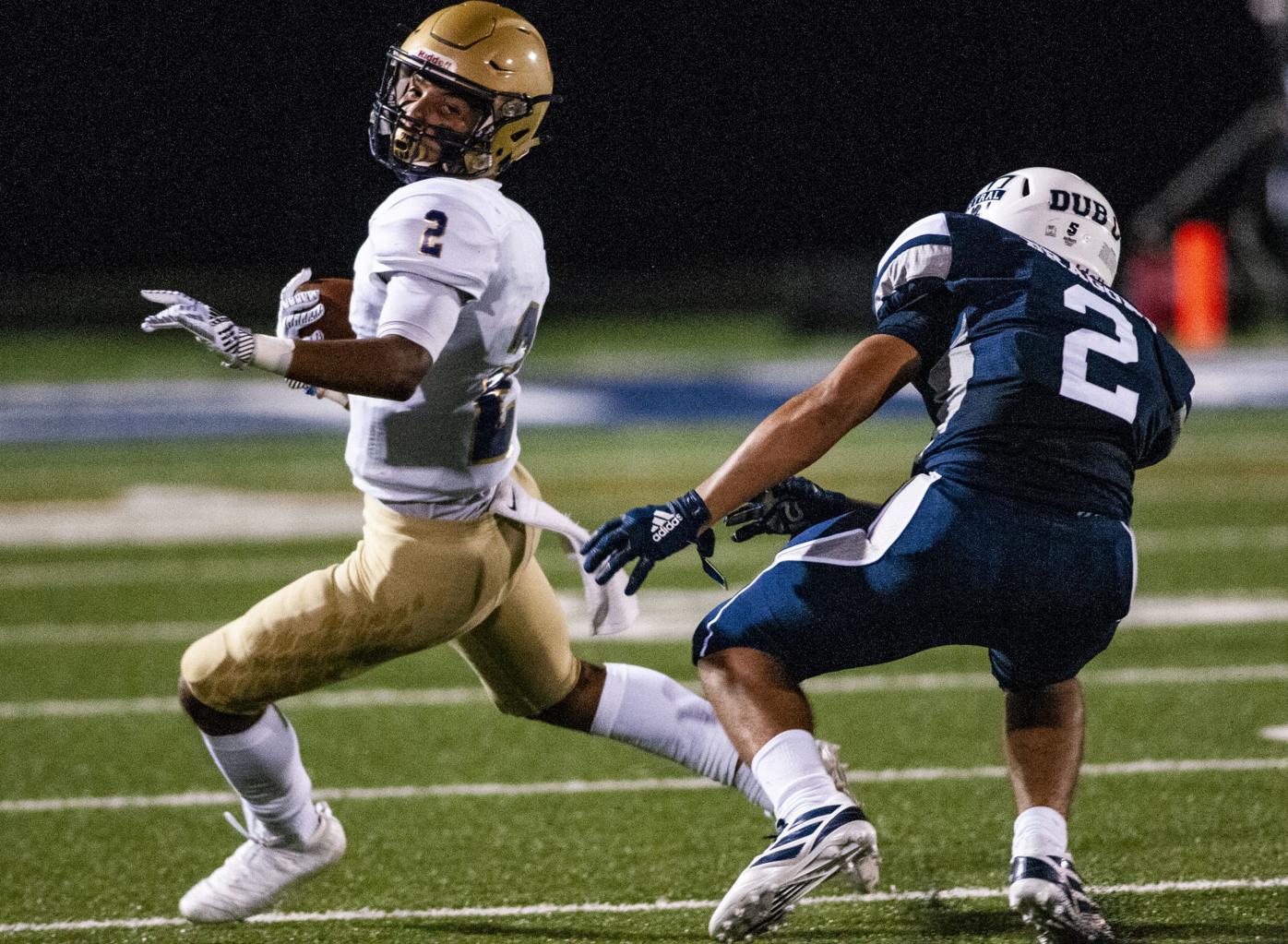 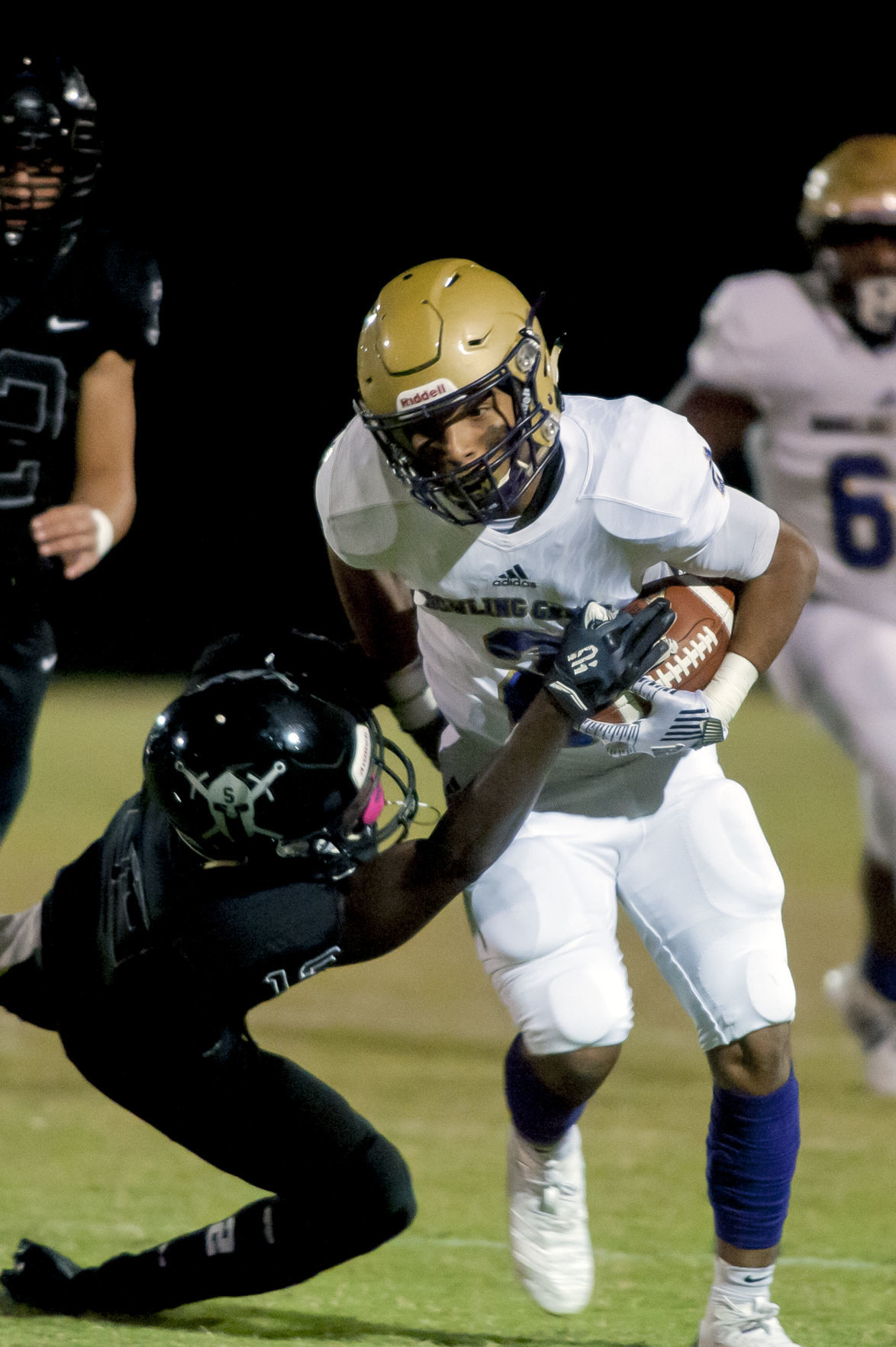 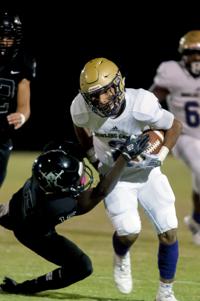 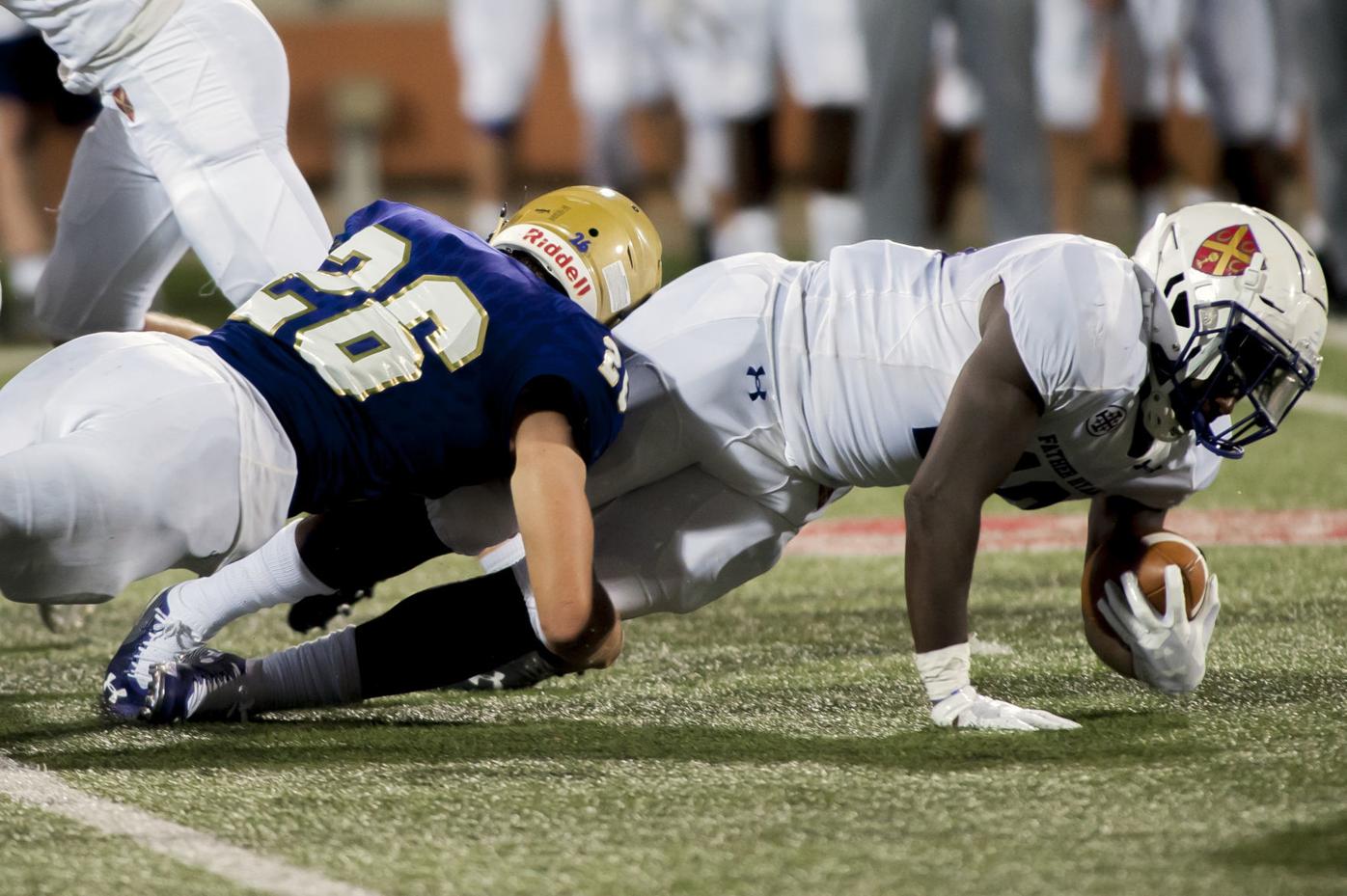 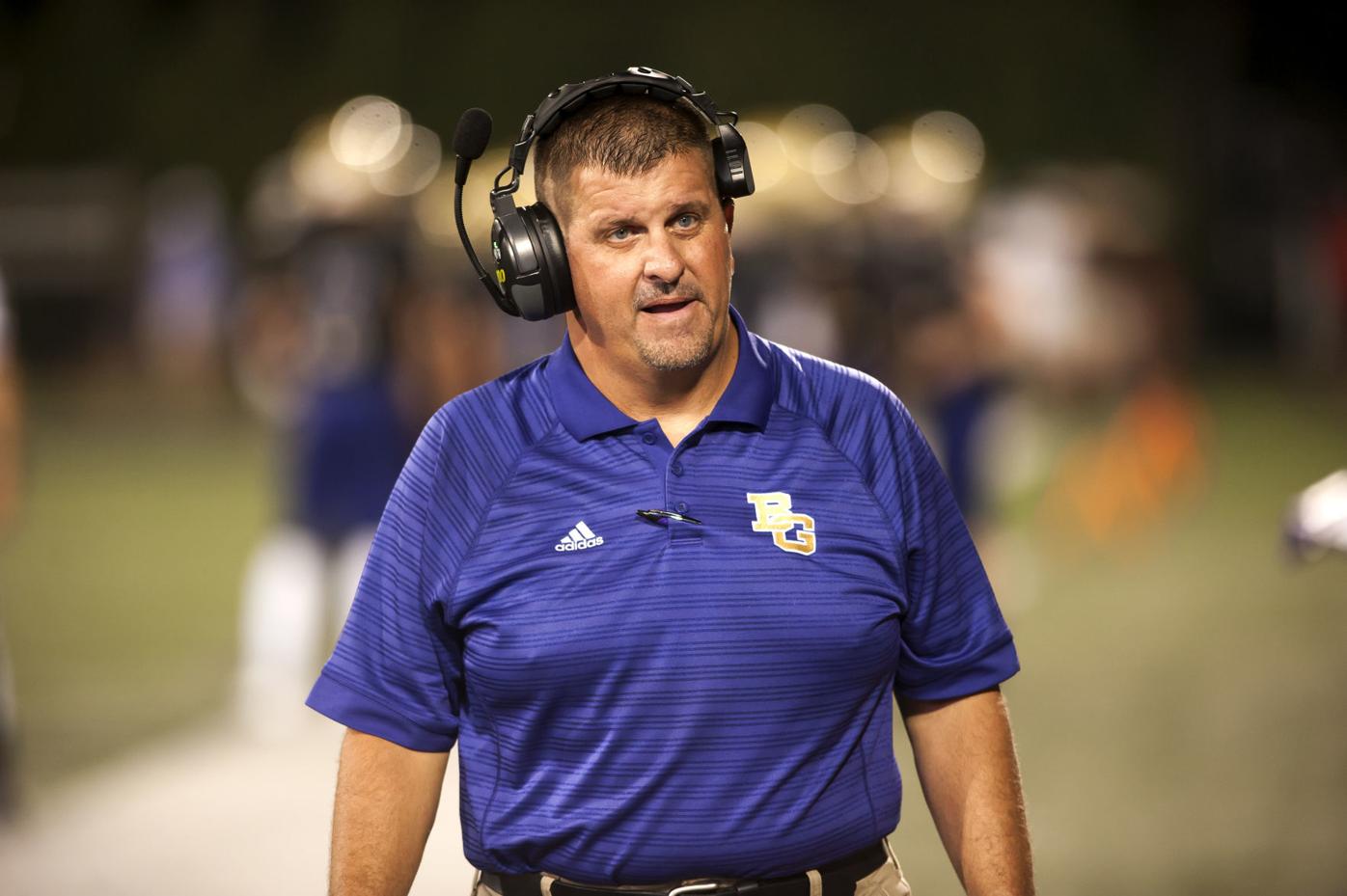 Bowling Green’s Jordan Dingle (from right) looks to get past Greenwood’s Sebastian Conwell and Lofton Howard on Oct. 25 during the Purples’ 39-0 win at Greenwood High School.

Bowling Green has been beefing up its football schedule for years, trying to play the best competition it can in hopes of being prepared for a deep playoff run.

Head coach Mark Spader points back to the mid-2000s, when he was an assistant under Kevin Wallace, to the start of that practice, and he believes it’s what helped lead to five state championships in six years.

While 2016 was the last time the Purples have finished on top, the quality of opponents on their regular-season schedule hasn’t diminished.

This fall, Bowling Green will face five opponents that finished in the top 10 in their respective class in last year’s final AP poll, plus another that received votes. The Purples are playing up a class in five games, and Bowling Green’s opponents have won a combined 47 state titles.

“Although we like to play a challenging schedule, this was probably the most daunting we’ve ever put together,” Spader said.

Bowling Green didn’t shy from it last year – the only difference in opponent this year comes in the Rafferty’s Bowl opener – and were able to stay relatively healthy and productive with their depth. The Purples finished 9-4, claimed the Class 5A, District 2 title and later advanced to the state semifinals, before falling to eventual champion Covington Catholic.

With an experienced group returning, including quarterback Conner Cooper, leading rusher Javeius Bunton, leading receivers Jordan Dingle and Dezmond Wilson, plus pieces along the line and on a defense anchored by leading tackler Rece Jones, the Purples know what to expect when the 2020 season kicks off.

“Coming off last year, I never felt fear in our fieldhouse of our schedule. Our kids knew how challenging it was,” Spader said. “ ... Going into this year, it’s going to be the same thing. It’s a mirror of our schedule from last year, so our kids know what to expect – those that are returning. I know we won’t have any problems getting their attention throughout the season, as far as game planning and preparation goes.”

Here’s a look at the Bowling Green’s 2020 football schedule:

Aug. 22, vs. Butler at Houchens-Smith Stadium

The 2020 season opener will mark the first meeting between the Purples and Bears since 2000. Bowling Green leads the series 2-0. In last year’s opener, Bowling Green fell to Father Ryan (Tenn.) 24-21 on a game-winning 23-yard field goal from Zach Wesnofske. Butler lost to South Warren 33-20.

The Bears finished 4-7 and received a vote in the final Class 6A AP poll. Butler graduates quarterback Chaz Burks, who threw for 1,345 yards and 12 touchdowns and also ran in five touchdowns, as well as Jordan Watkins, who had 37 receptions for 712 yards and seven touchdowns, and Antwone Shaw, who had 669 yards and eight touchdowns on 43 receptions. Watkins signed with Louisville and Burks is committed to Austin Peay.

Bowling Green moved to 3-0 all-time against McCracken County with a 42-14 win last year in Paducah. The Mustangs went 9-4 last season, were Class 6A, District 1 champions and ranked ninth in the final 6A AP poll.

Cooper threw for 214 yards and three touchdowns – two of which went to Wilson – and Bunton led the ground game with 124 yards and two touchdowns on eight attempts.

The crosstown rivals have met at least once each season since 1974. The Purples lead the series 40-12 and have won 11 straight games against the Dragons. Bowling Green has allowed just one touchdown in the last four meetings and has outscored Warren Central 213-6 during that stretch.

The Dragons, who enter the season on a 45-game losing streak, had just 109 yards of offense in last year’s 56-0 loss. Bowling Green intercepted four passes.

Bowling Green blew out the Panthers 56-0 last season to even the series 2-2, and have outscored Pleasure Ridge Park a combined 100-7 in the last two meetings. The Panthers went 2-9 last season.

The Purples travel to Louisville in Week 5 to face Wallace’s Tigers. St. Xavier won 28-14 last year in Wallace’s return to El Donaldson Stadium to give the Tigers an 11-6 series lead. The two programs have met each year since 2011 and during that stretch Bowling Green is 6-3 against St. Xavier. No team has won back-to-back games in the series since the Purples won four straight between 2011-14.

The Purples were held to 60 yards rushing in last year’s loss. Cooper had 103 yards on 16-of-22 passing with an interception, and Payne had 95 yards and a touchdown on 12-of-17 passing.

Bowling Green went to Corbin in Week 6 last year ready to face a Redhound program coming off back-to-back Class 3A runner-up finishes for the first time, only to have the game canceled due to severe storms.

Corbin made the move to Class 4A and was ranked eighth in the AP poll when the two were scheduled to meet – the same spot the Redhounds finished the season. The Redhounds went 6-5. Freshman Cameron Combs quarterbacked Corbin, recording 1,876 yards and 16 receptions on 120-of-190 passing, adding 302 yards and seven touchdowns rushing. Corbin graduates two of its top three receivers in Jacob Steely and Ethan Wine, as well as leading rusher Nick Yeager, but returns Dakota Patterson, the second-leading receiver, and Treyveon Longmire, the second-leading rusher and fourth-leading receiver.

Justin Haddix, who had coached Corbin since 2014, left for Boyle County during the offseason, and Tom Greer was promoted from his defensive coordinator position to head coach.

Bowling Green moved to 3-2 all-time versus South Warren with two wins over the Spartans last year – 14-3 in the regular season and 20-13 in the district championship.

The Spartans led 3-0 at halftime in the regular season. Payne was injured just before halftime, and Cooper came in to complete 6-of-7 passes for 39 yards. Bunton had touchdown runs of 13 and 27 yards in the second half to help snap South Warren’s 21-game winning streak.

In the postseason, senior JaVyan Collins scored in the final minute to end South Warren’s season. The touchdown came after the Spartans tied the game on a 4-yard touchdown pass to Jantzen Dunn from Caden Veltkamp, who was making his first start since the Week 5, when he suffered a wrist injury in a win at Central.

Veltkamp is expected to be South Warren’s starting quarterback this fall. He’s part of a strong class that also includes leading rusher Kobe Martin. Dunn, one of the top defensive backs in the state, committed to Ohio State this month. South Warren finished 10-2 and was fifth in the final Class 5A AP poll.

Christian County enters the season on a 15-game losing streak, which includes a 49-0 regular-season loss and a 37-6 first-round playoff loss to Bowling Green. The Purples have won nine straight against the Colonels and 16 of the last 17. Christian County’s last win in the series, which Bowling Green leads 26-7, was in the second round of the 2010 playoffs.

Bowling Green stifled the Colonels’ run game for -46 yards in the regular season. Donta Abren had 131 yards on 18-of-28 passing with two interceptions. Cooper recorded nearly 200 yards on 13-of-20 passing, with two touchdowns and an interception, and the Purples had nine players combine for 114 yards rushing, with none getting more than seven carries.

Christian County had 54 yards rushing in the postseason meeting. Cooper threw for 141 yards and three touchdowns on 15-of-18 passing, with an interception, and Bowling Green rushed for 110 yards, with Collins accounting for both scores on the ground.

Abren and leading rusher LRay Coleman were both juniors.

In 29 meetings with the Gators since 1991, Bowling Green has never lost. The Purples stayed unbeaten against Greenwood with a 39-0 win at The Swamp last season.

Cooper had 287 yards and three touchdowns on 14-of-20 passing, with Dingle accounting for 92 yards and a touchdown on three receptions. Bunton hit the century mark running the ball, going for 100 yards and two touchdowns on 12 carries. The Purples had 208 yards rushing.

Last year’s meeting was the first since 2010 in a series that Trinity leads 6-0. The Shamrocks won 49-21 to close out the regular season, before going on to win the Class 6A title – the program’s 26th state championship. Trinity went 13-2, finishing second in the AP poll.

The Shamrocks ran for 367 yards in last year’s meeting. Armon Tucker accounted for 180 yards and four touchdowns on 19 carries, and Brad West had 170 yards and one score on 22 attempts. Nathan McElroy had 115 yards on 13-of-22 passing, with a touchdown and interception. None of those three were seniors. The Purples were limited to just 103 yards of offense.{&end}