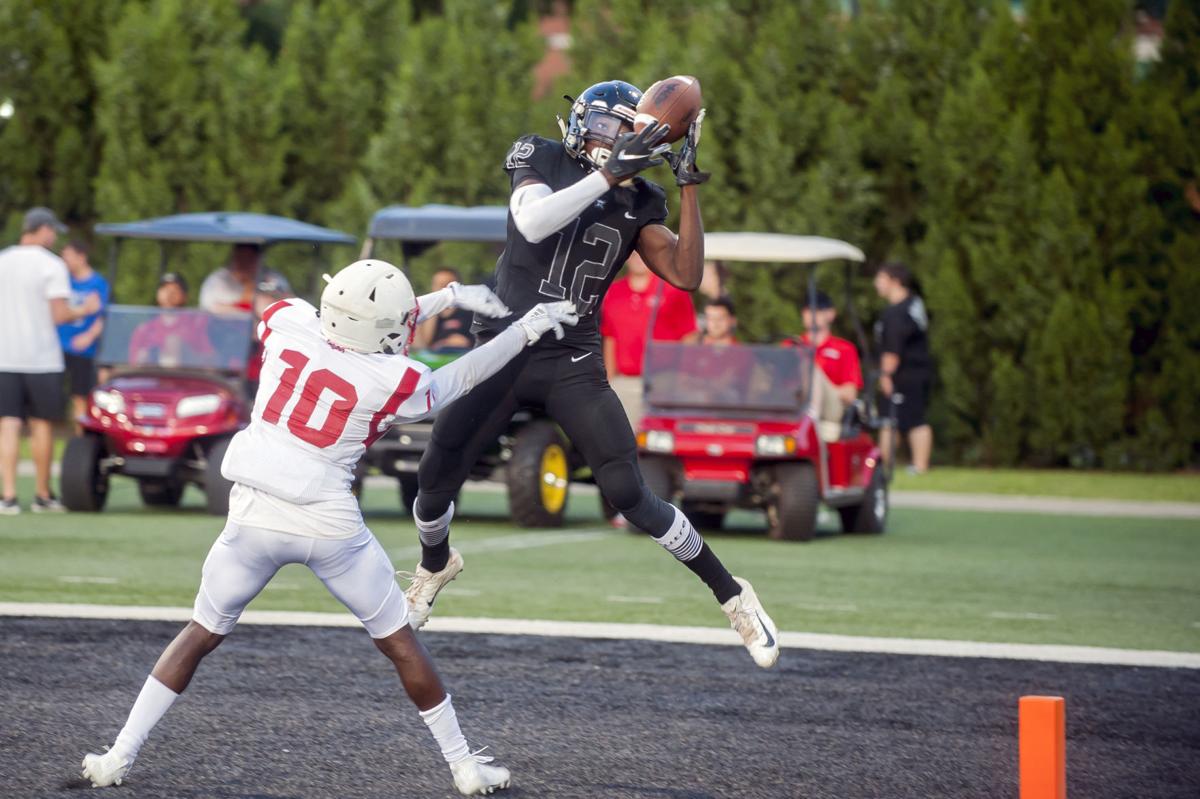 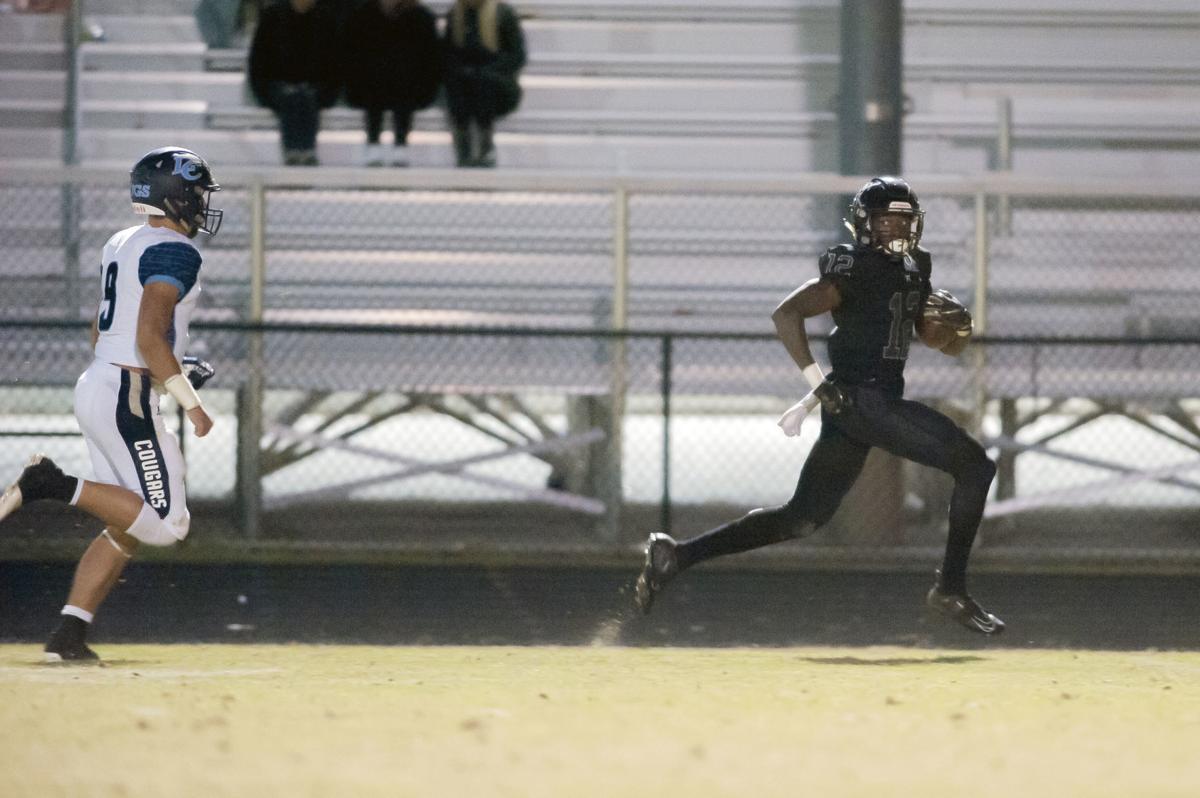 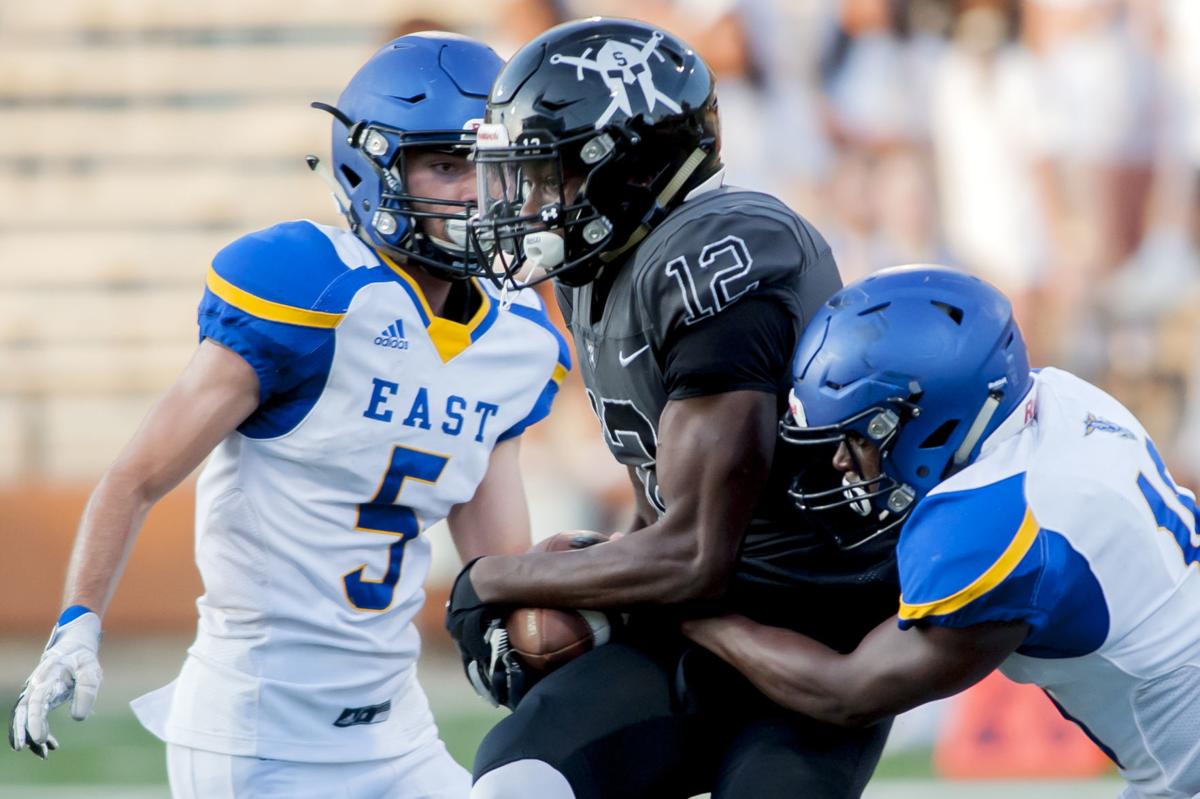 Warren East’s Damontra Pillow (from right) wraps up South Warren’s Jantzen Dunn next to Warren East’s Cain Adams during the Spartans’ 50-6 win on Aug. 30 in the German American Bank Bowl at Houchens-Smith Stadium. 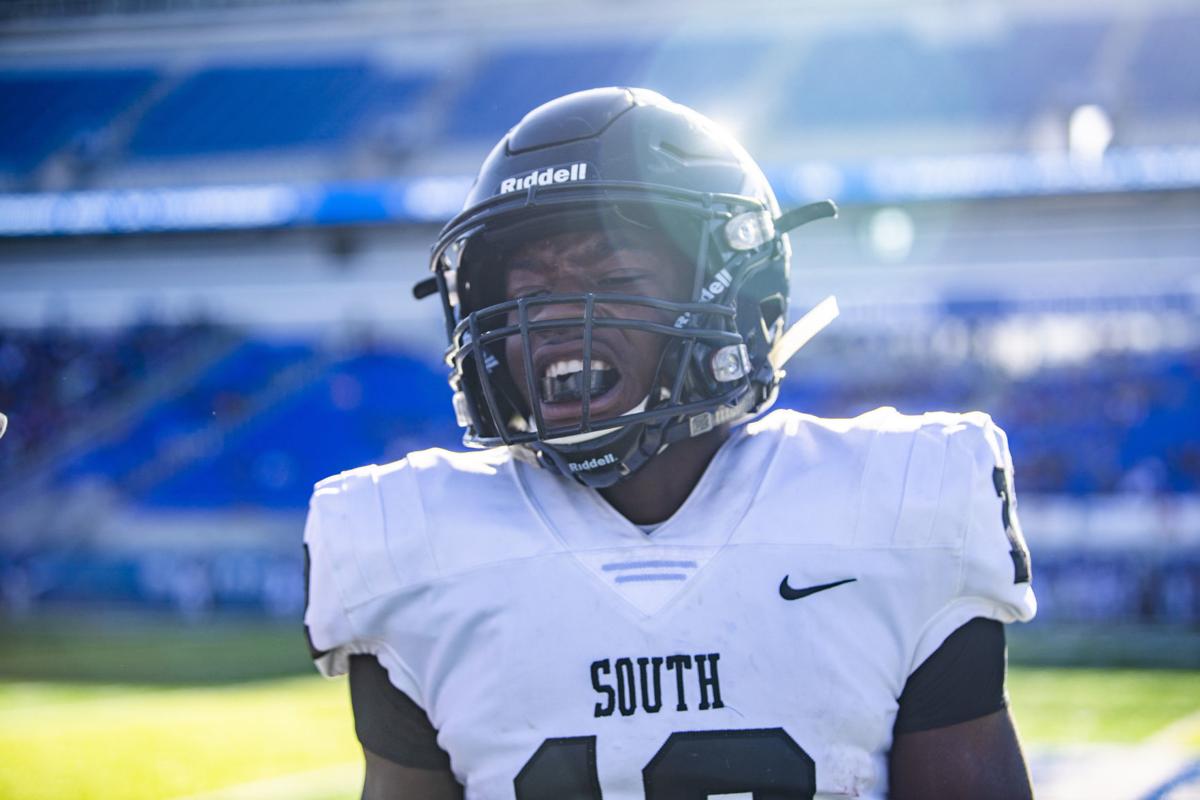 South Warren receiver Jantzen Dunn celebrates after scoring a touchdown during South Warren’s 20-16 win over Covington Catholic in the 2018 Class 5A State Championship on Dec. 2, 2018, at Kroger Field in Lexington. 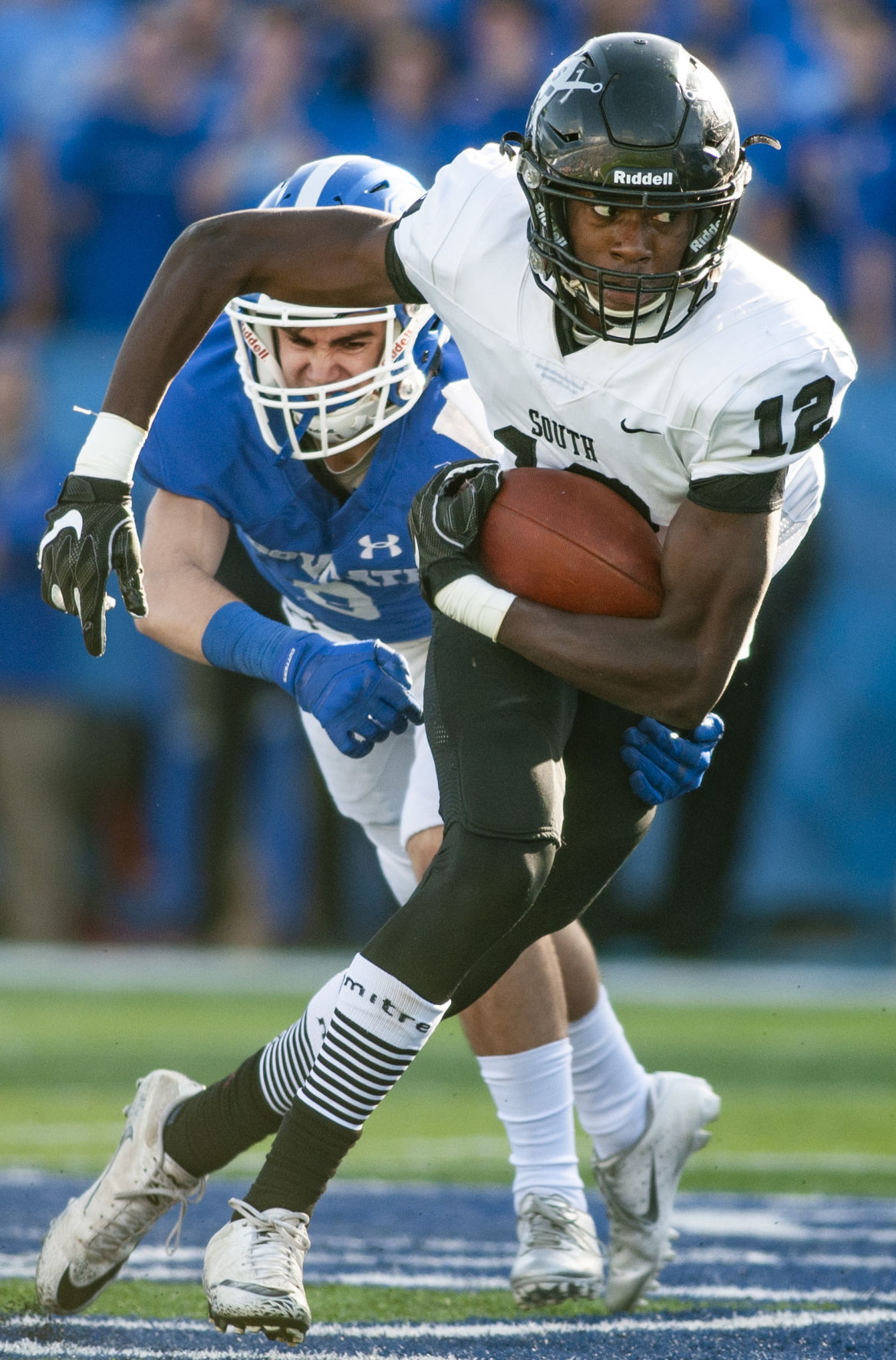 South Warren receiver Jantzen Dunn runs as he is pursued by Covington Catholic defensive back Duncan Summe during the Spartans’ 20-16 win in the Class 5A state championship Dec. 2 at Kroger Field in Lexington.

This is the second story in a series profiling three area football players from the Class of 2021 who have been top targets for their teams’ quarterbacks, as well as Division I coaches.

Jantzen Dunn recalls his first impression of South Warren and the school’s football program, then chuckles.

He first visited the school on Nashville Road in Bowling Green the summer following his freshman year at Riverwood International Charter School in Sandy Springs, Ga., located just north of Atlanta, and was preparing to move to Kentucky to live with his father, Mitchell Dunn.

Since that day, the Spartans’ junior receiver and defensive back has put in the work, and now is one of the top high school football recruits in the state.

Brandon Smith, who has been the head coach at South Warren since 2014 and has led the program to two state titles, remembers that first day around Spartan Field, too. It was the first time he saw the potential Dunn possessed that has now turned into nearly 30 offers from the country’s top Division I programs.

“When I was showing him around the fieldhouse and the field, we had some guys out there that were playing catch and he went out there to play catch with them, and that’s kind of when I figured out he had some of those backyard ball type of skills,” Smith said Tuesday in a phone interview with the Daily News. “I knew he was going to be really raw, there was going to be a lot to kind of teach and fix, but you could see the athleticism and the skill set was there.”

Those “backyard ball” skills are what stood out most to Smith. Those, coupled with his now-6-foot-1, 178-pound frame, have allowed Dunn to have success wherever Smith puts on the football field, as well as in track and field, where he’s the defending Class 3A, Region 2 long jump champion and high jump runner-up.

“Jantzen’s really athletic,” Smith said. “He’s got some length and some athleticism that’s special and that’s the first thing that sticks out to you, but the thing I think makes Jantzen special is he’s got some backyard ball in him. He’s really coordinated, he’s got a wide set of skills where he can just play anything and be good at it.

“To me, that’s harder and harder to find in kids. You might be able to find ones that are fast and that can jump high and things like that, but to have those type of backyard ball type of skills, it’s getting fewer and far between.”

Dunn points to two seniors – Jacob Lacey and Clayton Bush – on the 2018 Spartans squad that helped mentor and instill the South Warren values in him. Lacey recently finished up his freshman season at Notre Dame, while Bush stayed in town and played his freshman year at Western Kentucky.

“It’s a big difference here and it was difficult at first because I had a lot of friends that grew up (in Georgia) and I had to leave them all of a sudden – family issues, but all that’s solved – and it turned out to be a great decision,” Dunn said.

The Spartans were perfect in Dunn’s first season in Bowling Green, capping off a 15-0 season with a 20-16 victory over Covington Catholic in the KHSAA Class 5A state championship game. He played in each of the team’s games, recorded 30 total tackles and forced and recovered two fumbles – one of which went for a touchdown.

Dunn wasn’t involved much in the offense until later in the season, and finished the year with four receptions for 68 yards and one touchdown. Of that, half of his catches for 60 yards and the lone touchdown reception came in the state championship game. He even threw one pass, which was completed for a 33-yard touchdown to Tanner Gallahair in the third quarter of a 42-12 regular-season victory over Owensboro Catholic.

The late addition to the offense is part of the reason why Smith didn’t see him as affected as he could have been by several changes before district play the following season. Gavin Spurrier – the quarterback for the 2018 state title run – is now at Duke, and sophomore starting quarterback Caden Veltkamp was injured in the fifth game of the 2019 campaign. Veltkamp was replaced by fellow sophomore Mason Willingham for the next six games and Smith says it was “kind of hit or miss” when Dunn would get in, adding that they kept it simple when he saw time offensively.

Still, he showed his ability to create plays.

Dunn only had 19 receptions – tied for the third-most on the team behind Tomi Mustapha and Avrin Bell – but six of those went for touchdowns. He finished with 324 yards on those 19 catches, and added 86 yards and one touchdown on nine rushing attempts.

“We should probably give him the ball a little more, shouldn’t we?” Smith joked.

While he wasn’t impacted by the changes on offense nearly as much as he could have been, defense – where he’s been recruited to play cornerback or safety mostly, according to Smith – was a different story, especially after senior defensive end Isaac Young went down with a season-ending knee injury in the 2019 opener against Butler.

“He was with a bunch of guys that knew what was going on and he was the new guy, and then his junior year by the second game after Isaac got hurt, he was literally the only returning starter out there on the field,” Smith said. “It was him and then 10 new guys, so that was a change for him.

“I think he took a lot from that experience and learned a lot from a leadership perspective when you don’t have other people to tell you what to do. Now they’re asking him what to do.”

Dunn finished the season for the fifth-best scoring defense in Class 5A with 37 total tackles and an interception. He received his first offer after a camp at Western Kentucky the summer before his junior year, he says, but as he and South Warren went throughout the season, the offers started pouring in from several of the nation’s top programs. They’ve continued coming, too, with Michigan State, Arkansas, Penn State, Ohio State and Michigan all offering since the beginning of March.

“Really, he’s kind of different from any of the kids we’ve had because he really started blowing up during the season. Usually in-season is never a heavy recruiting time,” Smith said. “A lot of it happens in the winter and the spring, but he was having a really good season and was getting some really good film and I think once one or two guys pulled the trigger, it just kept going from there and it really takes care of itself.”

He says he’s weighing his options and is hoping to have a decision sometime in the summer, with the possibility of cutting his list of schools down before then. Recruiting has been somewhat put on hold due to the COVID-19 pandemic, however. All in-person recruiting has been suspended by the NCAA until at least April 15. The KHSAA also eliminated spring football practices for 2020 and instituted a dead period through April 12 due to the coronavirus.

Smith is hoping Dunn will be “the guy” this fall, and has seen his drive during the offseason, especially in the weight room. The junior works with a trainer and has been trying to keep up with home workouts while continuing to motivate his teammates, he says, with the hopes of enjoying his senior season and capping it off with another state championship.

“I try to have fun, but greatness doesn’t wait for you. You’ve got to go take it. There’s nothing better than to find a way to work no matter the circumstances,” Dunn said. “I just try to preach that to them and hopefully they listen to me. Consistency is key to it, so every day I’m on their butts and we just try to get better and have been trying to get it done in the weight room and in school, no matter what we’re doing.”