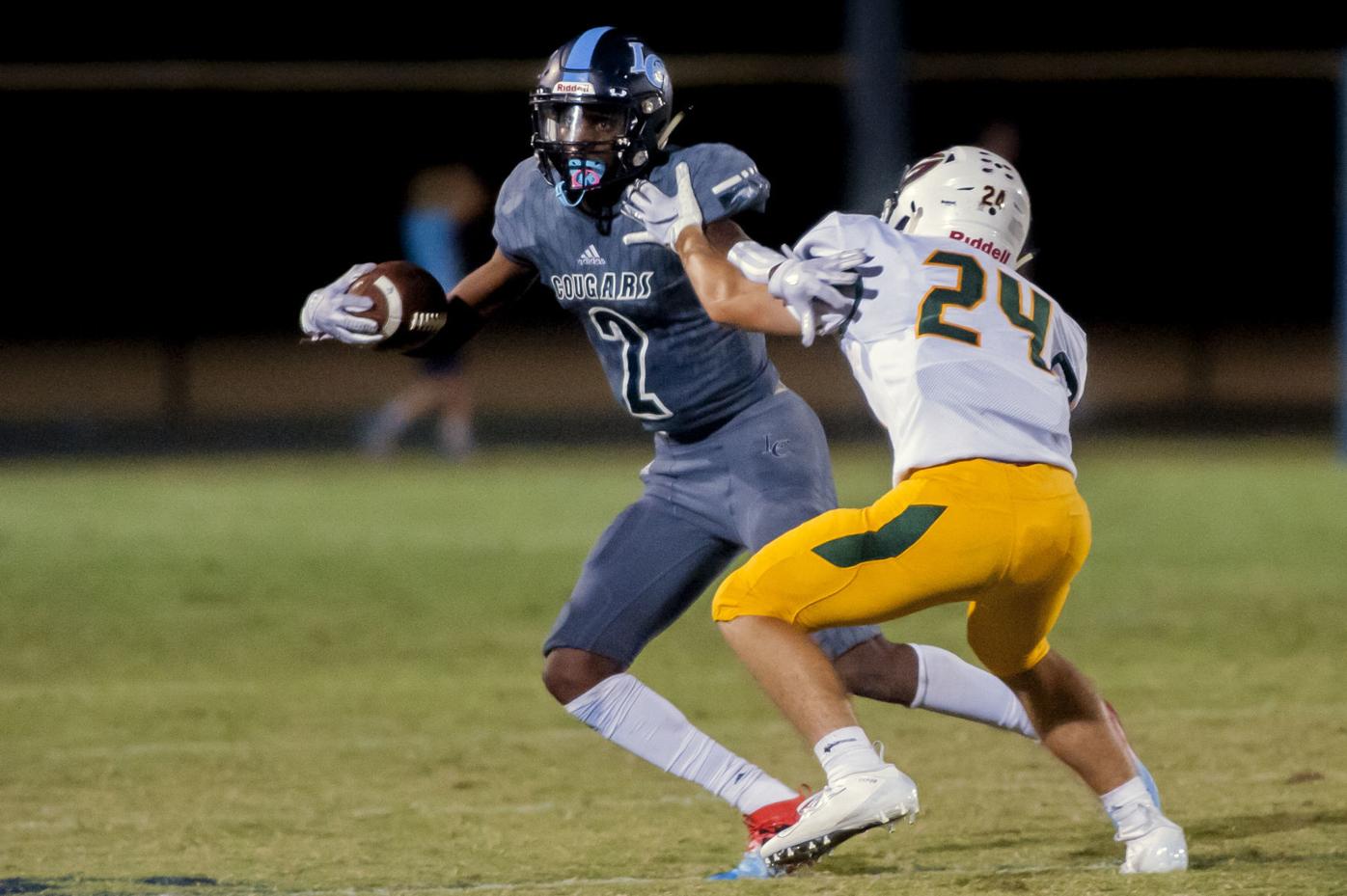 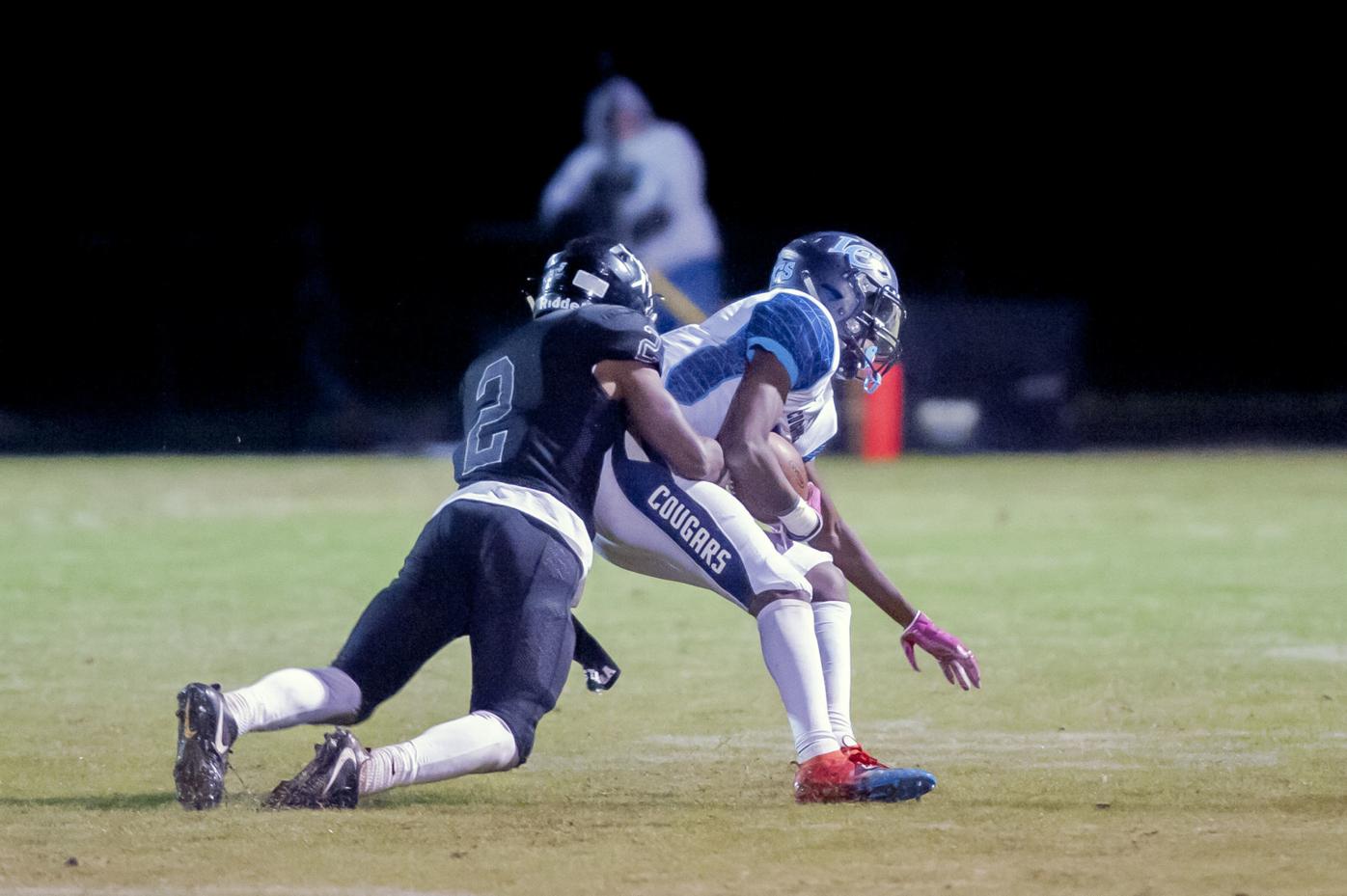 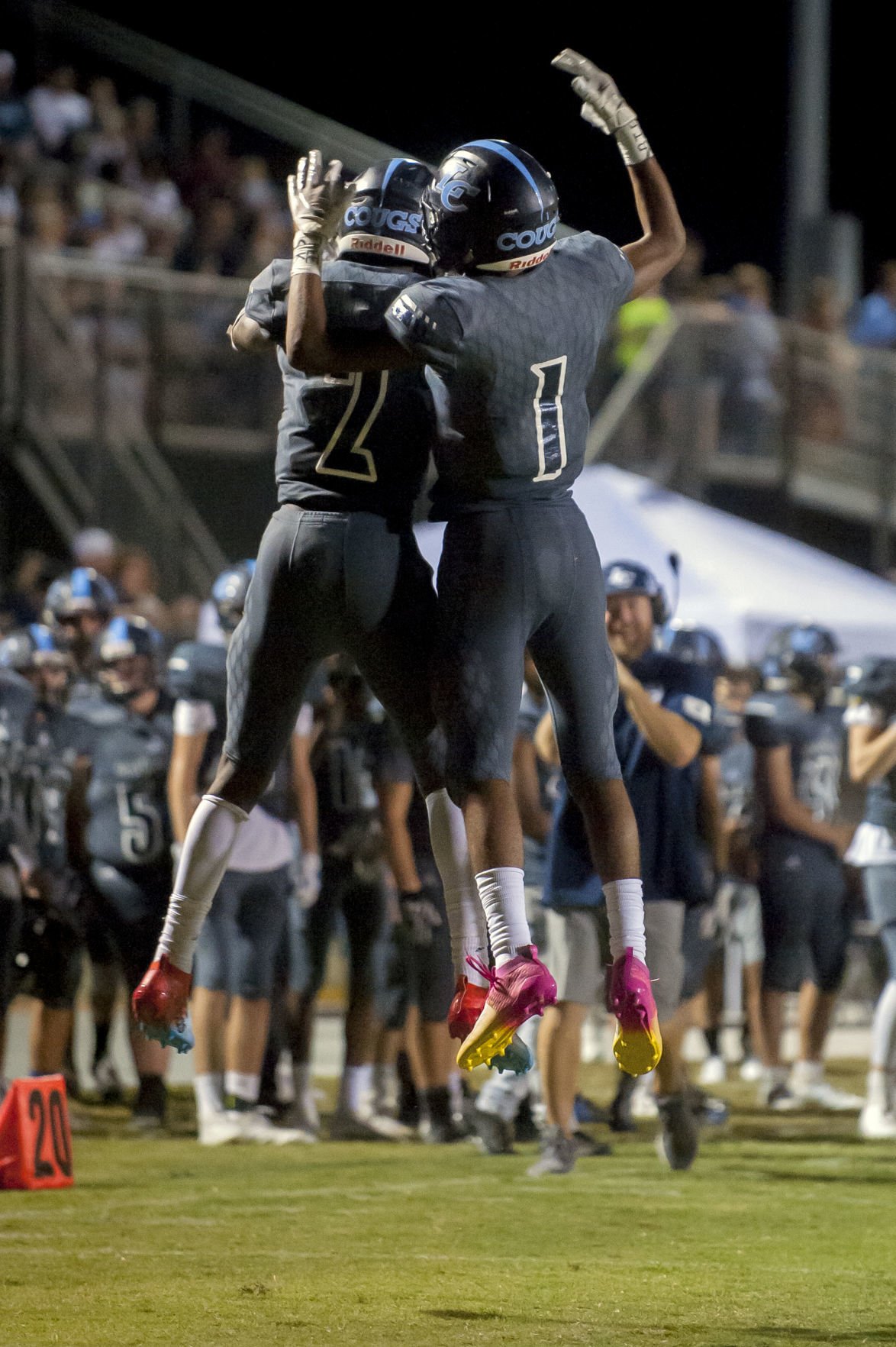 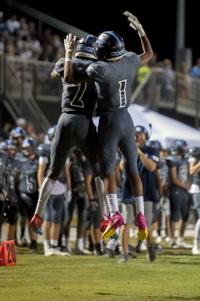 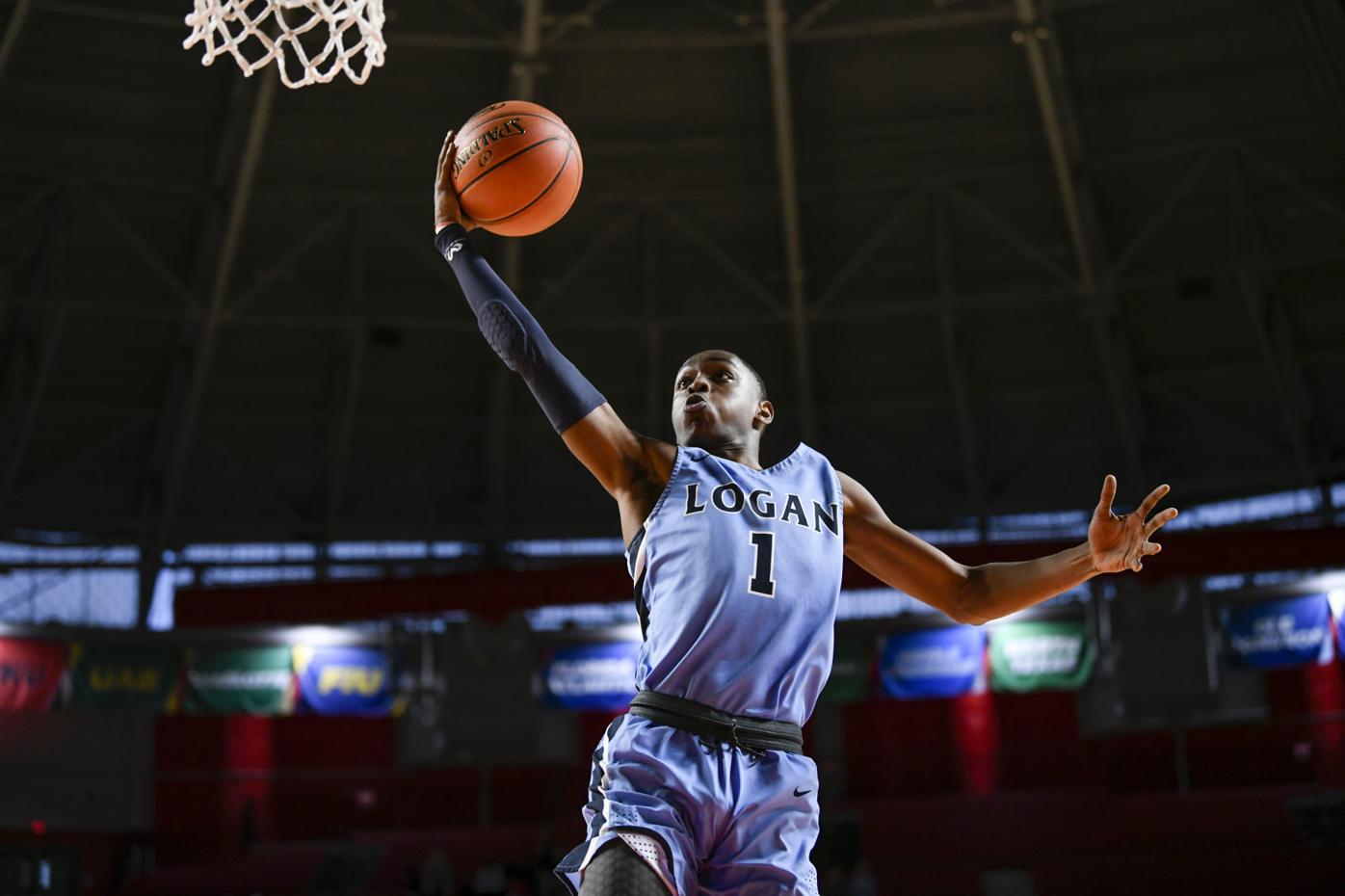 Logan County’s Anthony Woodard (1) goes for a lay up during the Region 4 Boys’ Basketball Tournament semifinals at E A. Diddle Arena on March 9, 2020. Bowling Green beat Logan County 64-52. (Photo by Chris Kohley/Special to the Daily News)

Todd Adler remembers the first special play that Anthony “Rooster” Woodard made in a Logan County football jersey – one that showed his ability and potential compared to that of most high school kids.

It would be hard to forget, too, since it was on the very first snap Woodard took with the Cougars.

The then-sophomore had transferred to Logan County from crosstown rival Russellville late, and hadn’t played – or dressed – in the team’s 57-0 season-opening victory over Butler County. Adler, the team’s head coach since the 2016 season, said Woodard had missed some practices because of AAU basketball and was still dealing with a finger injury from the summer.

But Woodard got his chance to make an impression in the team’s second game. The Cougars were in a close affair at Muhlenberg County as halftime approached, and Adler decided to give Woodard a shot on the final play of the second quarter.

“It was about 50 yards out with about six seconds, seven seconds to go and I said, ‘Rooster, you’re in at receiver. Hey, we’re going to throw a go route to Rooster. Tyler (Ezell), throw it to him. I want to see if he can go catch it,’ ” Adler said in a phone interview with the Daily News.

“He had a cast on his arm because he broke his pinky during the summer playing basketball and he came in, ran a go route, we threw him the ball, the horn went off and he jumps up and catches it with one hand in the end zone to score. That’s the only play he played that game.”

Since that first snap, the junior multisport standout has continued to make plays for Logan County and, in February, he picked up his first Division I football offer from Eastern Kentucky. He added a second from Missouri State on Wednesday. Now, he’s trying to continue to put in the work to create more opportunities for his future.

Woodard played in 10 games the fall of his freshman year and was Russellville’s second-leading receiver behind Devin Quarles. He caught nine passes for 174 yards and two touchdowns, was tied for sixth on the team with 45 total tackles and recovered a fumble for the 7-5 Panthers. He was also the second-leading scorer on the school’s basketball team at 15.9 points per game and was the leading rebounder at 5.8 per game.

He says he never expected to attend Logan County, but helping with the transition was the fact that the schools are less than four miles apart and he had known other students through youth sports leagues.

“It came up and I moved,” he said in a phone interview with the Daily News.” ... When I moved, after the first couple of days, I felt like any of them. They treated me like family. They welcomed me.”

When he made the move to Logan County, the nickname “Rooster” came with him. Nobody quite knows where it came from – even Woodard himself – but it has become a household name around the roughly 1,000-student school off U.S. 68 as he’s built himself into the Cougars’ community.

“That’s what everybody knows him as,” Adler said. “The kids enjoy it. The little kids look up to him and he smiles from ear to ear when the little kids call him that name, so he kind of takes some pride in it, for sure.”

Like Adler, Woodard remembers vividly that first snap that started it all at Logan County. Though he didn’t anticipate getting into the game, he was ready to make the most of the chance he was given.

Logan County ended up beating the Mustangs 56-18 and Woodard finished the season with 11 receptions for 220 yards and four touchdowns. On defense, he had 16 total tackles, forced a fumble and picked off two passes.

He continued to improve from there and followed it by becoming the Cougars’ leading receiver last fall as a junior, finishing with 818 yards and 14 touchdowns on 44 receptions. He also forced and recovered a fumble on defense and recorded two interceptions.

“He transferred over from Russellville, so I didn’t get to see him as he was beginning his high school career, but as we got him, a lot has changed as far as his work ethic, his classroom study, his commitment to just doing the things that he needs to do to get to that level,” Adler said.

It’s led to his first Division I offer, which he announced on Twitter on Feb. 12. He and Adler went to Richmond for Eastern Kentucky’s junior day the following week.

“I was shocked. He had called me and told me and I was like, ‘Hold on, say that one more time,’ “ Woodard said. “Then he said it and I was just amazed. I didn’t even know what to say. I was speechless.”

Woodard added another offer from Missouri State on Wednesday, and several other programs have heard of and expressed interest in “Rooster,” according to Adler, including teams from the ACC, Big Ten, Big 12 and SEC.

Adler has seen Woodard focus more attention to the football field since he’s been at Logan County, while it was mostly toward basketball when he arrived as a sophomore.

Woodard plays AAU basketball with Manimal Elite – one of the area’s top programs – and has helped Logan County’s basketball team to back-to-back District 13 titles. He was tied with Jose Nazario as the team’s leading scorer this past season at 13.7 points per game and added 6.3 rebounds per game. The Cougars won 24 consecutive contests before falling to Bowling Green 64-52 in the Region 4 Tournament semifinals to finish the season 28-4.

“Rooster’s always been a basketball-first guy – you know, basketball, basketball, basketball – and he just kind of played football for something to fill in the fall,” Adler said. “We’ve not tried to force him to change his mind, but he gets in and works with us and I think it’s kind of changed his mind and his play on the field.

“He’s a competitor. Sometimes he lets his competitive edge speak more than his play just because he’s so competitive, but I don’t think that’s a bad thing. He just has to learn to kind of know when to show it and know when not to. He’s going to compete at the highest level day in and day out and I think the better competition he plays, the more he brings his game. That’s something to say about him, for sure.”

First up in his final year at Logan County will be football, though, and Woodard will likely be asked to step into a larger leadership role as part of an over 20-member senior class. The Cougars will also be dealing with a quarterback change with the graduation of Ezell, and Adler is expecting a competition between rising senior Braxton Baptiste and rising sophomore Corbin Rayno once the team can practice. The KHSAA eliminated spring football practices for 2020 and instituted a dead period through April 12 due to the COVID-19 pandemic, and the NCAA has also suspended in-person recruiting through April 15.

While there may be adjustments made to the Cougars’ offense this fall with a new quarterback, Adler still expects Woodard to get plenty of touches because of his playmaking ability.

And with many unknowns as Woodard heads into his final year of high school, he’s trying to improve in the weight room to get bigger and stronger for both football and basketball while waiting to see what opportunities present themselves in each sport before making a decision on what his future may hold.