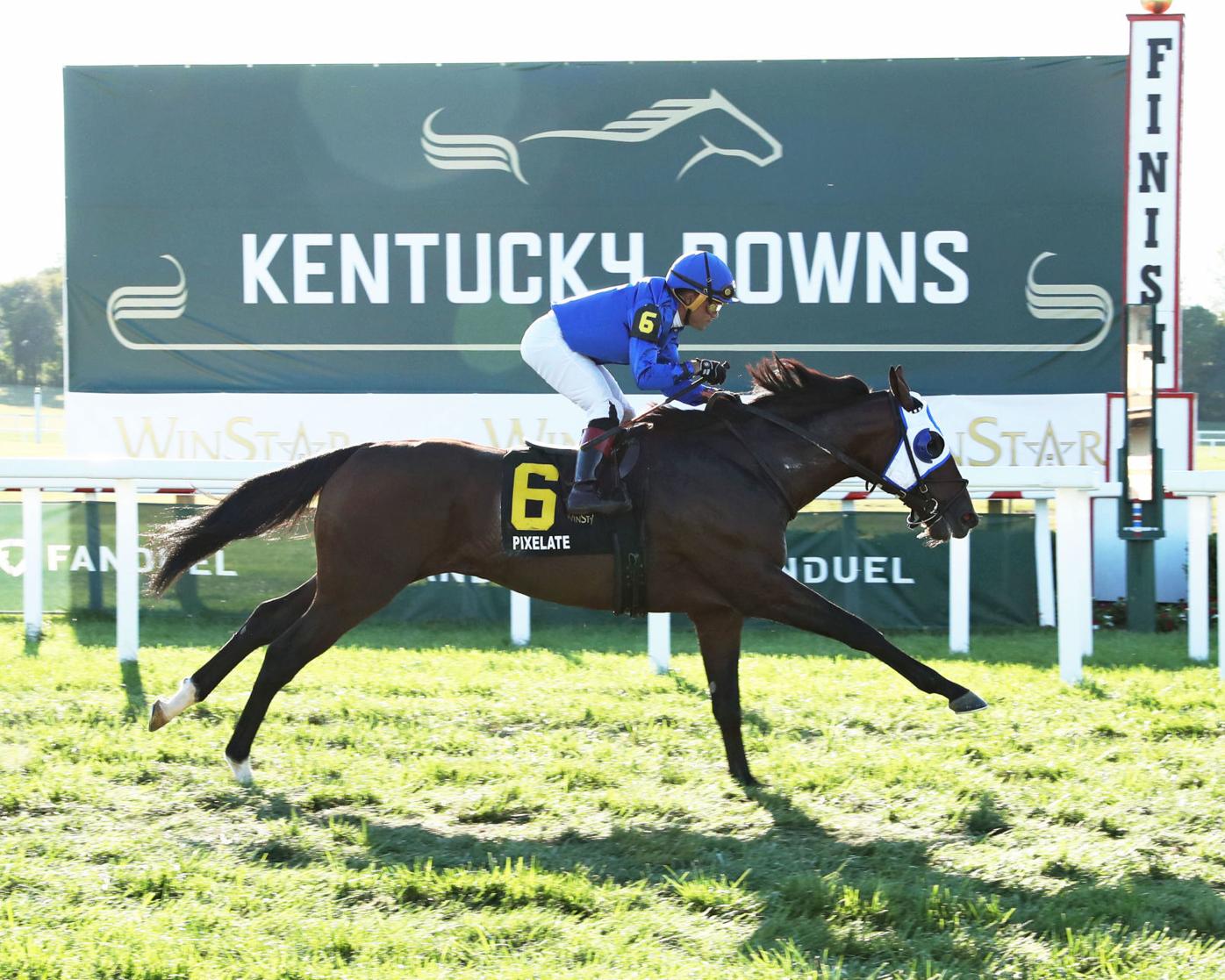 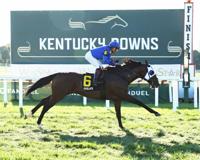 Pixelate, with jockey Joel Rosario aboard, crosses the finish line to win the Grade 3 $1 million WinStar Mint Million on Monday at Kentucky Downs in Franklin. 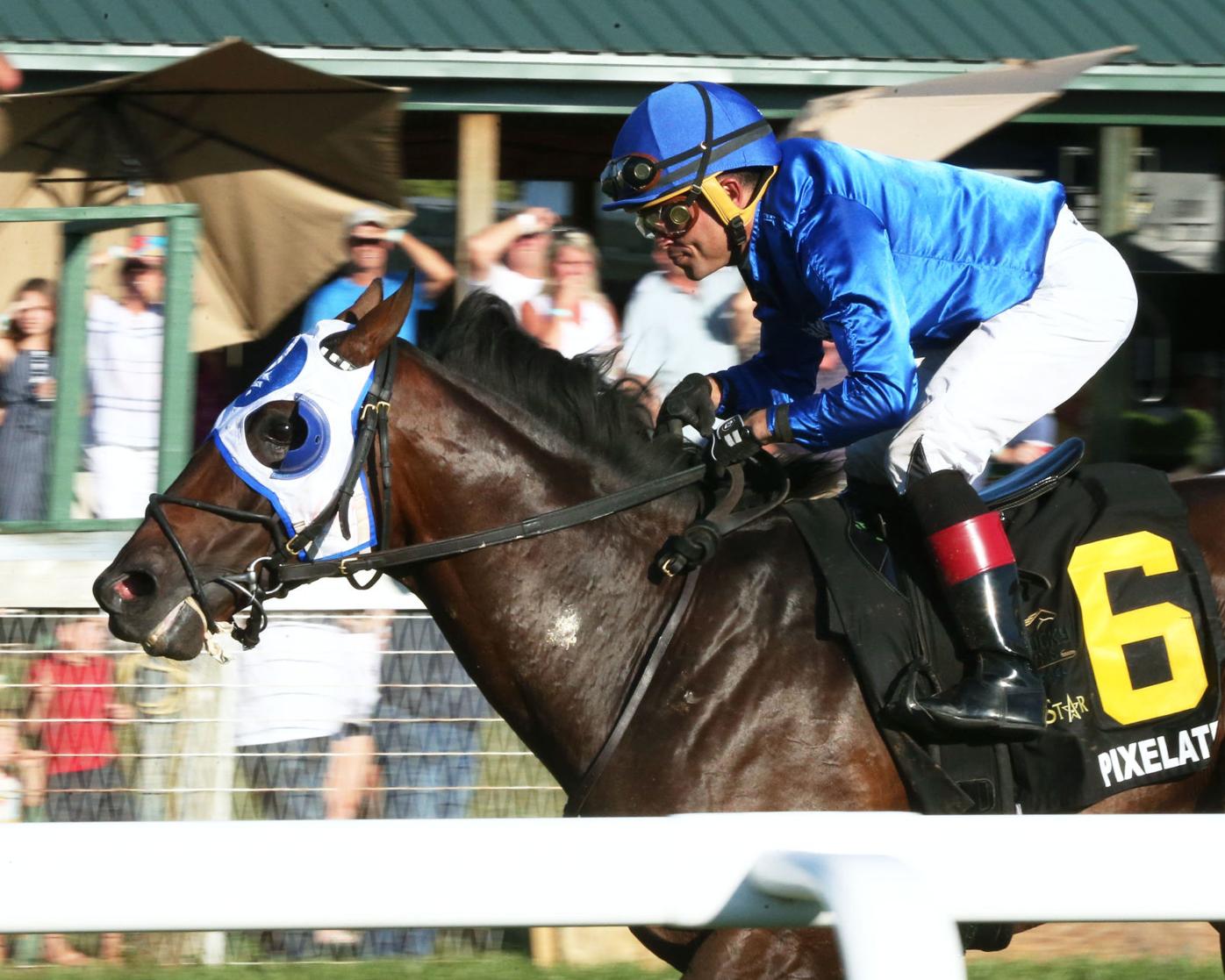 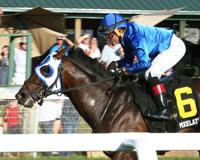 Pixelate, with jockey Joel Rosario aboard, runs to victory in the Grade 3 $1 million WinStar Mint Million on Monday at Kentucky Downs in Franklin.

Pixelate, with jockey Joel Rosario aboard, crosses the finish line to win the Grade 3 $1 million WinStar Mint Million on Monday at Kentucky Downs in Franklin.

Pixelate, with jockey Joel Rosario aboard, runs to victory in the Grade 3 $1 million WinStar Mint Million on Monday at Kentucky Downs in Franklin.

Monday was officially WinStar Day at the FanDuel Meet at Kentucky Downs in Franklin.

To bettors across the country, it was Joel Rosario Day. The jockey won on five of his eight mounts, including the featured $1 million, Grade 3 WinStar Mint Million as Godolphin’s late-running Pixelate blew past Somelikeithotbrown for a 2½-length victory.

On Sunday’s opening card, Rosario went 5-for-11, including winning the $500,000 Exacta Systems Dueling Grounds Oaks aboard Godolphin’s 3-year-old filly Adventuring. He would appear to have the Kentucky Downs riding title sewn up, with four days remaining (Wednesday, Thursday, Saturday and Sunday).

Rafael Bejarano holds the record for victories on a single card at Kentucky Downs when he went 6-for-8 on Sept. 21, 2004, while en route to the riding title with 12 wins, still the most by a rider at a meet. While quite the feat back then, Rosario is competing against arguably the strongest jockey colony in the country as riders from all over migrate to the track in pursuit of some of the largest purses in the world.

No rider has dominated the meet for two days since Florent Geroux won five races twice in 2015 en route to taking the riding title with a record-tying 12 victories that he matched in 2016.

“When you got a rider who’s won 10 races in two days on a track, he’s the guy you want,” Mint Million winning trainer Michael Stidham said in a news release. “This has got to be some kind of record.”

Jimmy Bell, president and racing manager of owner-breeder Godolphin, said he felt “all the confidence in the world” with Rosario aboard.

“We were joking in the paddock, any one of your previous (nine) ways of winning would work here,” Bell said in a news release. “He just rides with confidence. In our case, he just said the horse fit the course very well. Pixelate continued to find more, find more and just that slow momentum he built up to the rising ground and the long stretch. He said (Pixelate) relished the going. So that was fantastic.

“What a great weekend it’s been for Sheikh Mohammed and the breeding program, obviously with Adventuring winning and to come back today with another homebred today in Pixelate,” he added of Godolphin’s owner and the Dubai ruler Sheikh Mohammed al Maktoum. “It’s just been magical.”

Bizzee Channel set a sizzling pace of 21.83 seconds for the first quarter mile and 44.95 for the half, with Somelikeithotbrown in closest pursuit and taking command turning for home. But Flavius, last year’s winner and the 7-5 favorite, kicked into gear to go after Somelikeithotbrown before giving way to fifth.

Meanwhile, Pixelate came seven-wide down the stretch, swooping to the lead in the final sixteenth-mile while covering the mile in 1:34.04. Somelikeithotbrown and jockey Jose Ortiz held off his Mike Maker-trained stablemate Monarchs Glen, who closed from last of 10 older horses to finish another two lengths back in third under 2020 meet-leader Tyler Gaffalione.

“With the speed in front of me, it looked like they were going good,” Rosario said in a news release. “The key for me was trying to find a way through the track. He kept building, building, building, and with the long stretch, that helped get him there.

“He was in a nice gallop, he kept going and getting better, and I could see it when we caught up to the horses on the lead. I started thinking that we’re going to get it.”

“It was a fast pace, I was aware of it,” said Ortiz, Kentucky Downs’ 2018 and 2019 riding champion. “I was trying to wait as long as I could. But at the eighth pole, the favorite came up outside of me, so I had to go with him. I was able to beat him, but I wasn’t able to hold on. Pixelate got by me. I set up a good trip for him.”

Pixelate won for the sixth time, with another six seconds and four thirds, in 20 starts, earning $1,098,850 with the $509,850 payday. It was his second graded-stakes victory, having won the Grade 2 Del Mar Derby exactly a year ago.

“He deserves it because he finally got his day in the sun and got to make up for some of those times when we reached out and ran in some of the big races and he was only beaten 2-3 lengths,” Stidham said. “And today was his day. It was a beautiful thing. I’m so proud of the horse and what he’s accomplished.

“Certainly when I looked up at the time and saw 21-and-change and 44-and-change and we were sitting back about nine or 10 off of it, I thought, ‘Well, that’s the perfect spot to be in.’ And I think that helped us. But this horse, if you look at his form, he goes out and runs his heart out every time we run him, no matter what type of spot we pick. He’s always trying. Today things set up nicely for him. And he tried like he always does and it put him in the winner’s circle.”

As a New York-bred, Somelikeithotbrown was racing for the base purse of $550,000 with the Mint Million’s remaining $450,000 paid out only to Kentucky-bred horses. He still picked up $104,500 for second, enough to put him over $1 million in earnings.

“He ran his butt off, didn’t he?” said Dr. Harvey Diamond, co-founder of the Skychai Racing partnership that is majority owner in Somelikeithotbrown. “It looked like in mid-stretch that he was going to make it, and I saw this horse moving on the outside. We ran a good race. I think the pace was a little too quick for us.”{&end}