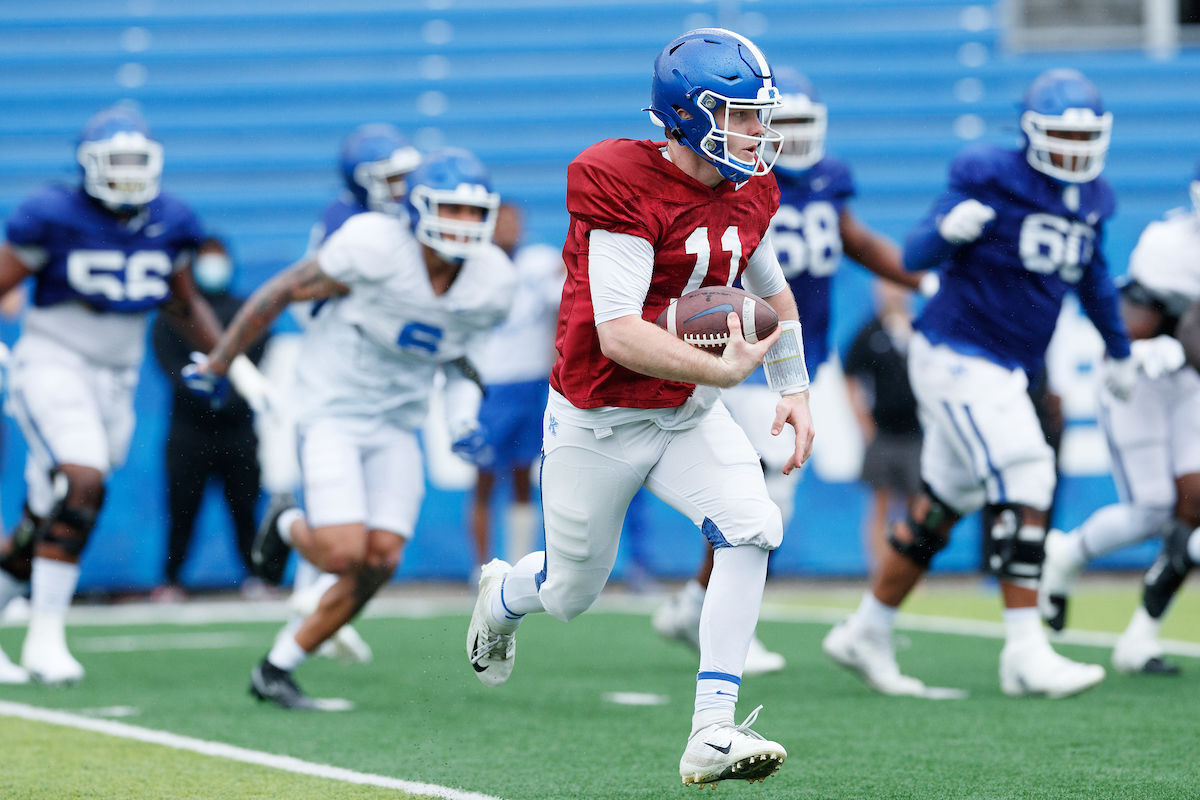 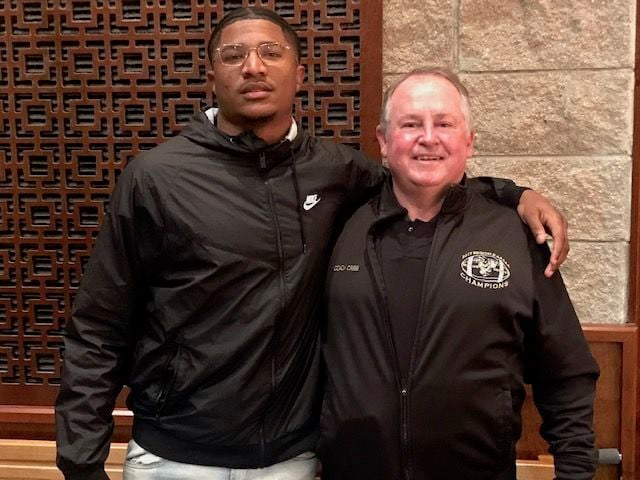 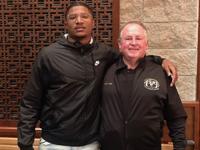 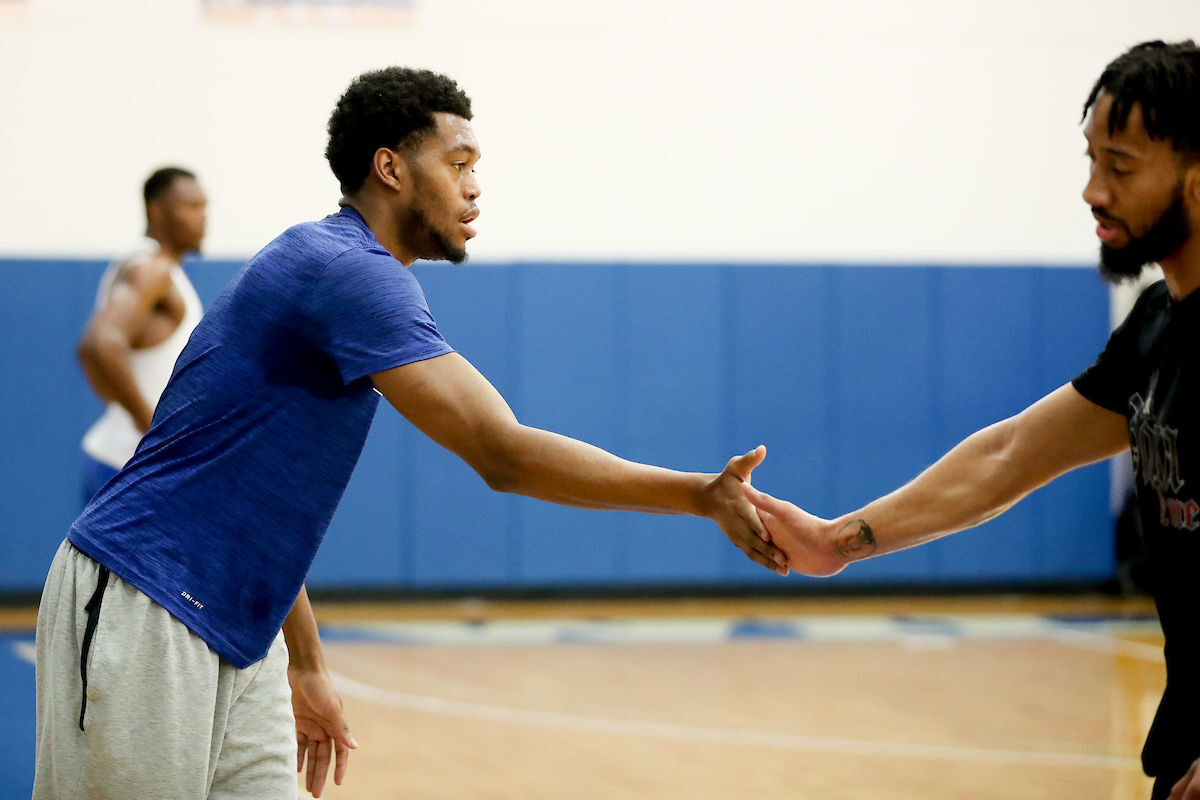 Kentucky’s Keion Brooks Jr. (left) slaps hands with teammate Davion Mintz during a men’s basketball practice. Brooks has spent time working on his 3-point shooting to keep from getting left behind with the way college basketball is changing. 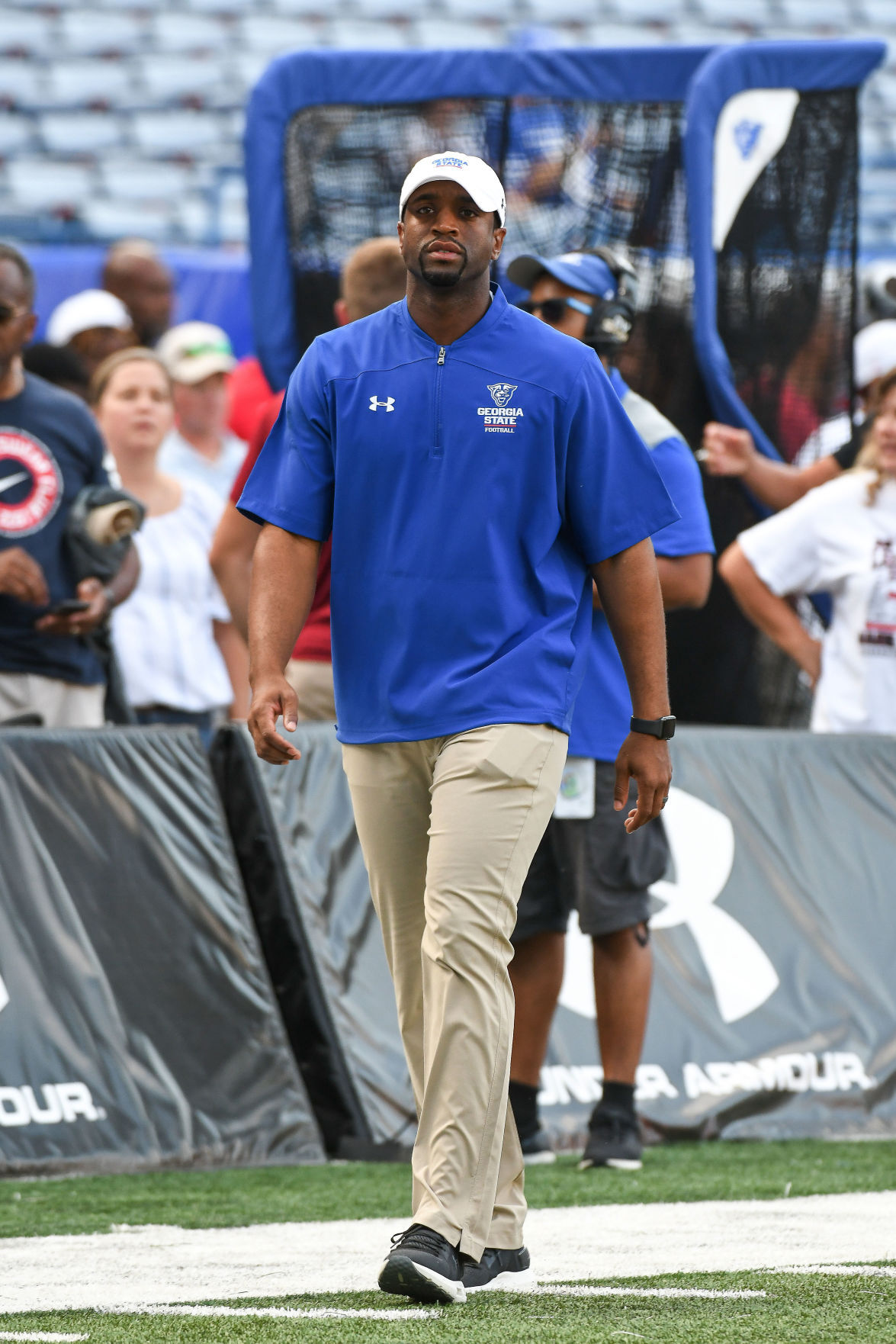 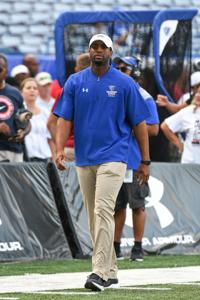 New UK defensive backs coach Chris Collins is a terrific communicator based on what Georgia State defensive coordinator Nathan Fuqua saw during their four years together in Georgia.

Kentucky’s Keion Brooks Jr. (left) slaps hands with teammate Davion Mintz during a men’s basketball practice. Brooks has spent time working on his 3-point shooting to keep from getting left behind with the way college basketball is changing.

New UK defensive backs coach Chris Collins is a terrific communicator based on what Georgia State defensive coordinator Nathan Fuqua saw during their four years together in Georgia.

Even though he did not come out of spring practice as Kentucky’s No. 1 quarterback, redshirt freshman Beau Allen thought everything went well not only for him but the entire team.

Allen especially enjoyed having a chance to work with and get to know new offensive coordinator Liam Coen.

“I love coach Coen. He is a great guy. I learned a lot about football and probably even more that was not about football,” Allen said. “He can handle things extremely well and he can get guys to rally around him. I love him a lot.”

Allen figures to be part of a three-way battle for the starting quarterback position along with Joey Gatewood and Penn State transfer Will Levis. Coen has said he won’t pick a starter until preseason camp gets underway.

The former Lexington Catholic standout said that made spring practice both challenging and fun.

“We had a lot of fun times and a lot of challenging times. We would start hot, finish slow or start slow and finish strong. Practice went all kinds of ways, but people had fun,” Allen said. “We got better. It was both a struggle and fun. I can’t wait for more of it and the rest of the team feels the same.”

Not having anything settled at quarterback is not intimidating or discouraging to Allen, a prolific high school passer who played only sparingly last season. Allen says it is “inspiring and motivating” knowing he’s part of a three-way quarterback competition.

“Me, Joey and Will will all compete. I know we will all be grinding as hard as we can just like everybody on the whole team. Everybody is going to be battling for spots. It is going to be fun,” Allen said.

“Everybody has a great opportunity to be the best player they can be. I think we are all going to grind, have fun and the best outcome will happen.”

No one will have to explain to junior guard Sahvir Wheeler how much teams want to beat Kentucky. He knows first-hand from playing two years at Georgia before transferring to UK and helped the Bulldogs beat UK last season.

“I knew coming into it (transferring to Kentucky) that when we step on the floor we are their Super Bowl and biggest game of the year and have targets on our back,” Wheeler, who obviously has paid attention to John Calipari’s Super Bowl comparison, said.

Wheeler doesn’t expect opponents to want to beat UK any less because of last year’s 9-16 season the Cats had.

“Having a target on your back and the fact people are coming after you forces you to stay sharp, watch film, constantly be in the gym,” Wheeler said. “You just have to be ready for it.”

“He just did an incredible job. He was not pushy. He did his sales pitch about Kentucky and nothing else,” Cribb said. “Trevin was planning on signing with Auburn but they fired the coach (Gus Malzahn) and did not retain the linebacker coach, either, so he opened his recruitment back up.

“Georgia already had eight to 10 linebackers already on the roster. Kentucky’s image of high character went a long ways with him and the coach really sold it in a great way. Auburn thought they had him. But the Kentucky coach was very honest with him and showed Trevin the opportunity to get on the field right away.

“Trevin liked the idea of playing against the best teams in the country and I think he has a bright future. He’s a guy who will be playing football for a long time.”

Cribb says Wallace has a high character that Kentucky coaches, teammates and fans will love.

“He is big on family. He’s not on social media at all,” Cribb said. “He is a great student. Teachers loved him. He is all smiles, has great manners. He is an old-school type kid who makes really good grades. He might not be the most blessed as far as academics coming naturally, but he works hard to make good grades.

“He’s such a good kid that after practice he would go over and help his dad coach the little league team. Most kids would just sit in the truck and get on their phone. Not him. He wanted to help teach kids.”

“Two kids were getting after it. One kid had the upper hand and there was not a lot the teachers could do. Trevin swooped in out of nowhere and picked the kid up off his feet and ran about 10 yards to put him in another classroom,” Cribb said. “He just stopped it. The teachers thought he was a hero. That’s just the kind of kid he is.”

Want more reason to believe that Kentucky coach John Calipari – who has added three skilled outside shooters in Kellan Grady, CJ Fredrick and TyTy Washington to his roster – is putting more emphasis on shooting next season?

Junior forward Keion Brooks Jr. provided that at a recent media opportunity when he was asked what he had been working on since last season ended.

“Continue to build on my versatility and the ability to guard multiple positions. I got to get better at shooting the 3, attacking people off the dribble, being more perimeter oriented,” Brooks said.

“The game is changing. I don’t want to get left behind. I’ve got to change my game as the time’s come.”

Not get left behind is what Calipari seems to be doing, too, as he has indicated he’s looking for skills and shooting over athleticism. Brooks gets that and also felt no pressure to leave UK after two years rather than return for another season to improve his game because Immanuel Quickley, PJ Washington and Nick Richards did it and got rewarded in the NBA draft.

“They made it OK to come back and they’ve had great success here,” Brooks said. “My journey wasn’t to be one-and-done. It took me a couple years. I’m just continuing to get better, keep doing that and hopefully I can reach my dream.”

After becoming UK’s all-time rushing leader, Benny Snell has played in 29 games the last two years with the Pittsburgh Steelers and ran for 794 yards and six touchdowns on 219 carries. Forty-four of his carries have gone for first downs and six runs have been for 20 or more yards. Snell has caught 13 passes for 84 yards, with 10 of the catches coming last season.

Former UK all-SEC running back Anthony White doesn’t like to compare players, but I asked him if getting to play in a pro-style offense this year would have Chris Rodriguez more prepared to play in the NFL than Snell was when he left UK.

“Chris will probably make the better NFL player. He seems to be faster and a little bigger. But the thing they cannot measure is Benny’s heart and ability to pick up yards when you need them. I just don’t think Benny is getting a fair shot right now with the Steelers (because of the way they throw the ball so much),” White, who ran for 1,758 yards and 11 touchdowns and caught 194 passes for 1,520 yards and eight touchdowns at UK, said.

White said getting to play for new UK offensive coordinator Liam Coen will “absolutely” give Rodriguez an edge starting his NFL career.

“There were all kind of questions about Benny catching the ball coming out of college because he didn’t get to show that he could,” White said. “Chris will be playing in a pro-set offense and will be more of a passing game option.

“You will see how he fits into different offenses, where Benny did not have that luxury at UK. Benny has the heart and grit, but teams never get to see how he would fit in a pro-style offense. They will get to see Chris do that.”

Former Danville High School all-state defensive lineman Nathan Fuqua is the defensive coordinator at Georgia State and believes Kentucky made a wise decision hiring Chris Collins, the safeties coach at Georgia State, to fill the position vacated by Steve Clinkscale when he left for Michigan.

“Chris has a good football background,” Fuqua said. “On the field, the communication part is outstanding. He can get guys to take it from the classroom and implement it on the field. He is a really good communicator with the way he delivers his message.”

Fuqua says Collins is not an intimidating coach or someone players fear. However, he makes his points in a strong way.

“Some guys respond one way and some guys need coached another way,” Fuqua said. “Chris can feel that and knows what buttons to push and when to put his arms around them or when to really get after them. He builds relationships with guys and knows a lot about them and that helps him coach them. He will do that at Kentucky. Kentucky fans and players are going to love him.”

Quote of the Week: “He is going to be special. He reminds me of Jager (Burton). That athleticism on the offensive line for a guy 300 pounds is going to be scary,” former UK linebacker Donte Key and father of UK recruiting target Dane Key, on UK offensive lineman commit Grant Bingham of Johnson Central

Quote of the Week 2: “He plays just like Isaiah (Jackson). He’s blocking shots. He dunks the ball. He’s going to be a great player for us,” Kentucky junior Jacob Toppin, on UK freshman teammate Daimion Collins.

Quote of the Week 3: “He likes to hang out with friends. He’s always with his little brother. He likes video games. But he’s always chasing his craft and trying to improve. He’s a baller and pace is what makes him special. He can have 20 guys chasing him and he’ll play at his own. He has a James Harden-ish pace,” Pete Kaffey, basketball program director at Arizona Compass Prep, on UK freshman point guard TyTy Washington.{&end}