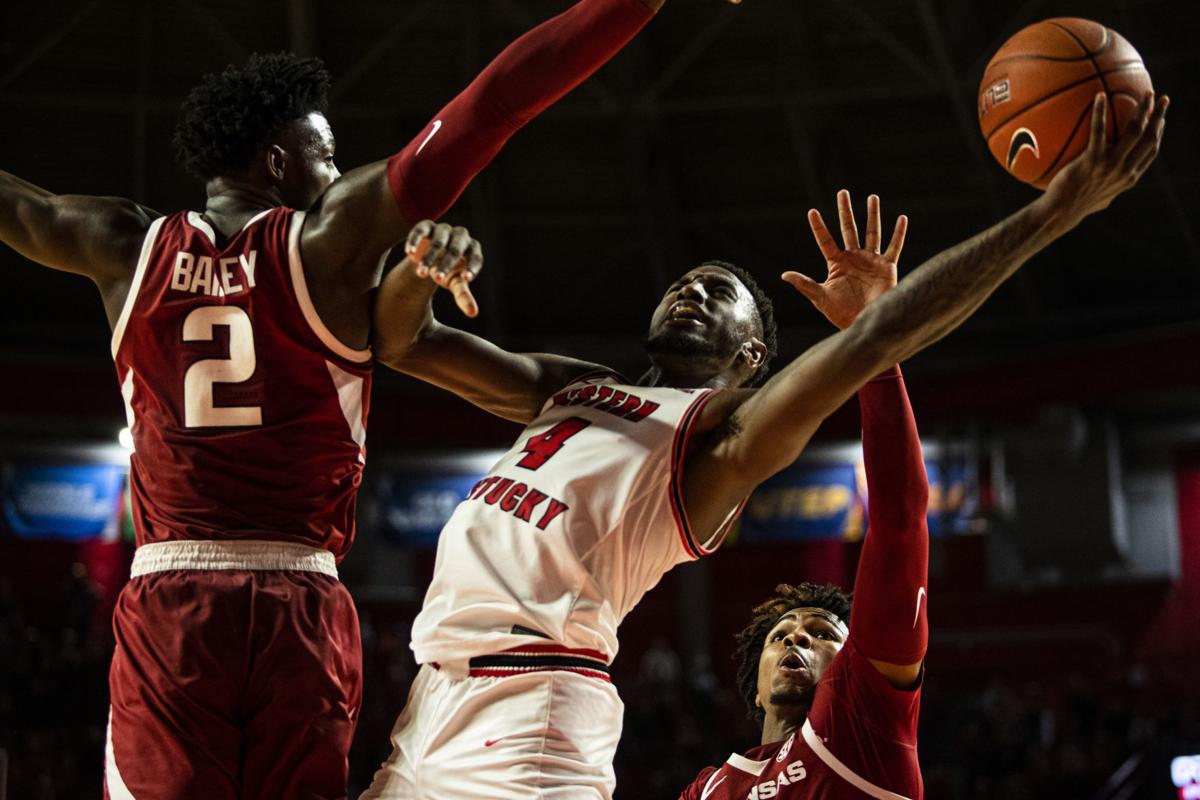 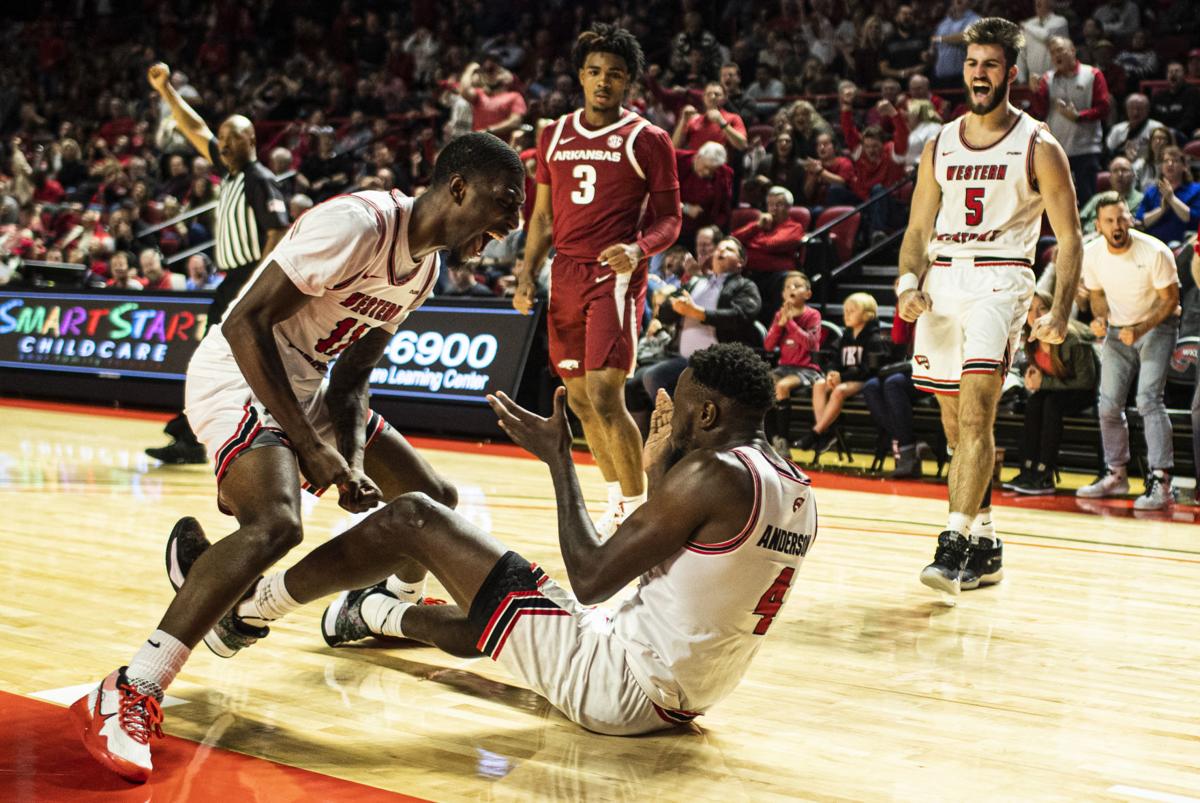 Western Kentucky guard Taveion Hollingsworth (left) celebrates after WKU guard Josh Anderson was fouled on a basket during the Hilltoppers’ 86-79 overtime win in over Arkansas on Saturday at E.A. Diddle Arena.

Western Kentucky guard Taveion Hollingsworth (left) celebrates after WKU guard Josh Anderson was fouled on a basket during the Hilltoppers’ 86-79 overtime win in over Arkansas on Saturday at E.A. Diddle Arena.

Josh Anderson drove to the basket and put up a shot while getting fouled by Arkansas’ Adrio Bailey with just over three minutes to play in the second half with the game tied 62-all.

His shot didn’t fall, but junior guard Taveion Hollingsworth was there with a yell and flex – hyping him up before helping him up.

And later, while looking at the stats during the postgame news conference, Hollingsworth couldn’t contain his excitement for the game Anderson had.

“I feel like we all know that he deserved more minutes than what he was getting, so for him to get a bunch of minutes that he did tonight, he showed up for that,” Hollingsworth said. “He just wasn’t out there playing or just out there running around for 30 minutes, he was actually contributing to the game. He really came through in that overtime.”

After Jared Savage drilled a 3-pointer to force overtime against Arkansas on Saturday, Anderson scored Western Kentucky’s first five points of the added period to push the Hilltoppers ahead in an 86-79 win over the previously undefeated Razorbacks. Anderson finished with season-highs of 15 points and six rebounds.

“It was good that he was on the court. We definitely needed him for sure,” Hollingsworth said. “For him to come through like he did, that shows a lot.”

WKU (7-3) coach Rick Stansbury knew Anderson would be needed against an Arkansas (8-1) team that plays a unique style of four guards. He played 31:35 on Saturday, well over his season average of 19.7 minutes per game. His season-high was 31 in a Nov. 15 game against Eastern Kentucky where he scored 11 points – his previous season high in that category.

“Josh did what we wanted him to do. We got him a lot of minutes tonight and we need Josh to play like that,” Stansbury said. “In particular, when Charles (Bassey) went out – and even before Charles went out – we knew against this team we needed to play smaller than bigger, just because of the pressure they have on you. It’s hard to move that ball when they’re big on you, so our plan was already to play smaller, even before Charles went out.”

Bassey left the game with 3:40 remaining in the second half with an apparent left knee injury and didn’t return. His status was not known immediately following the game. Anderson, who had checked in at the 14:03 mark and hadn’t left up to Bassey’s departure, stayed in for the remainder of the game.

None of the 15 points he scored Saturday were bigger than the five to start overtime. His layup to open the period gave WKU a 75-73 advantage. Arkansas tied it on a pull-up jumper from Jimmy Whitt Jr. and a turnover ensued, but Anderson blocked a go-ahead 3-point attempt from Isaiah Joe and scored at the other end to put his team back up. His free throw with 2:19 to play made it a 78-77 lead and the Hilltoppers didn’t trail again.

“When I got in the game, it was just playing my role – come in, bring energy to the team, try to play good defense, great defense,” Anderson said. “I feel like I got to the boards a lot better than I had been doing and just played hard. That’s me. That’s what I do.”

His six rebounds topped his previous season-high of five against Fordham on Nov. 25. His season average was 2.4 and his 15 points were nearly nine more than what he averaged entering the game. Last season he averaged 12.1 points and 4.1 rebounds in 29.9 minutes per game.

“Probably going a little bit smaller helps us skill-wise out there, and skill-wise helps a lot of people, if that makes any sense. Josh is that one guy that we know defensively can go make plays,” Stansbury said. “We want him in there, we need him in there and he was terrific today for us. That’s what we need from him all the time.”{&end}

The finale of a wild week at E.A. Diddle Arena didn’t disappoint.