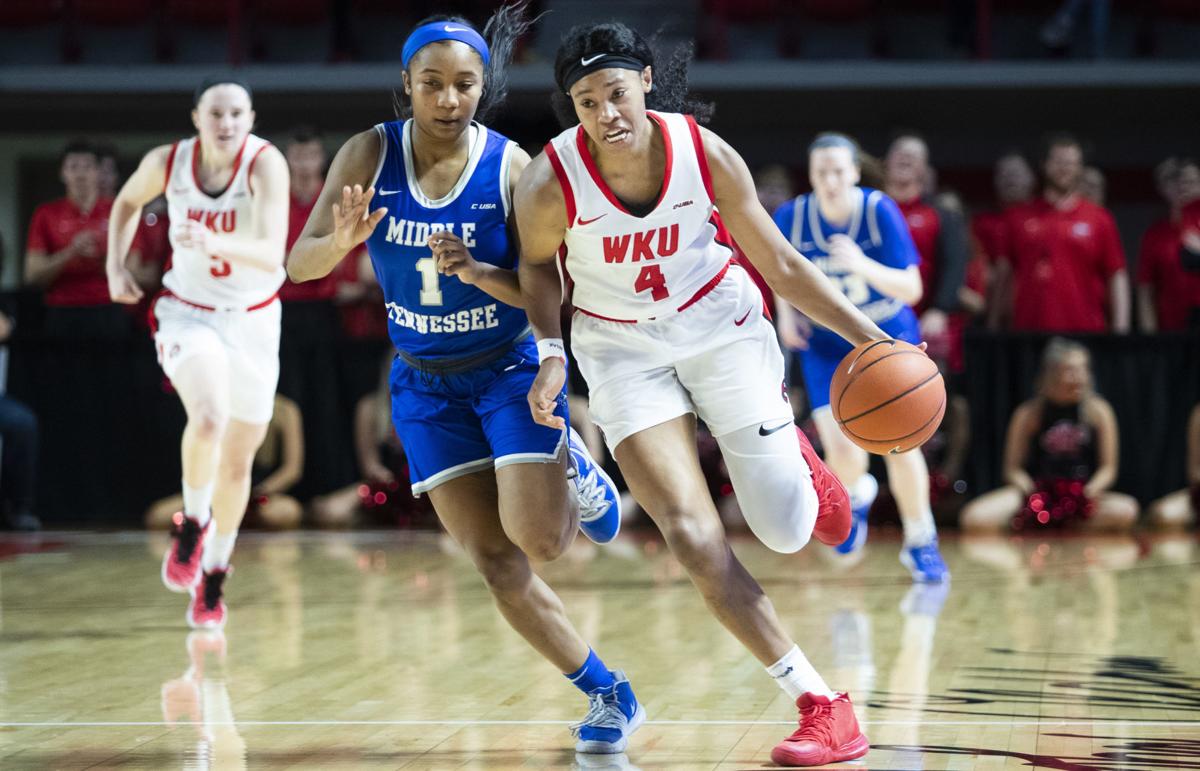 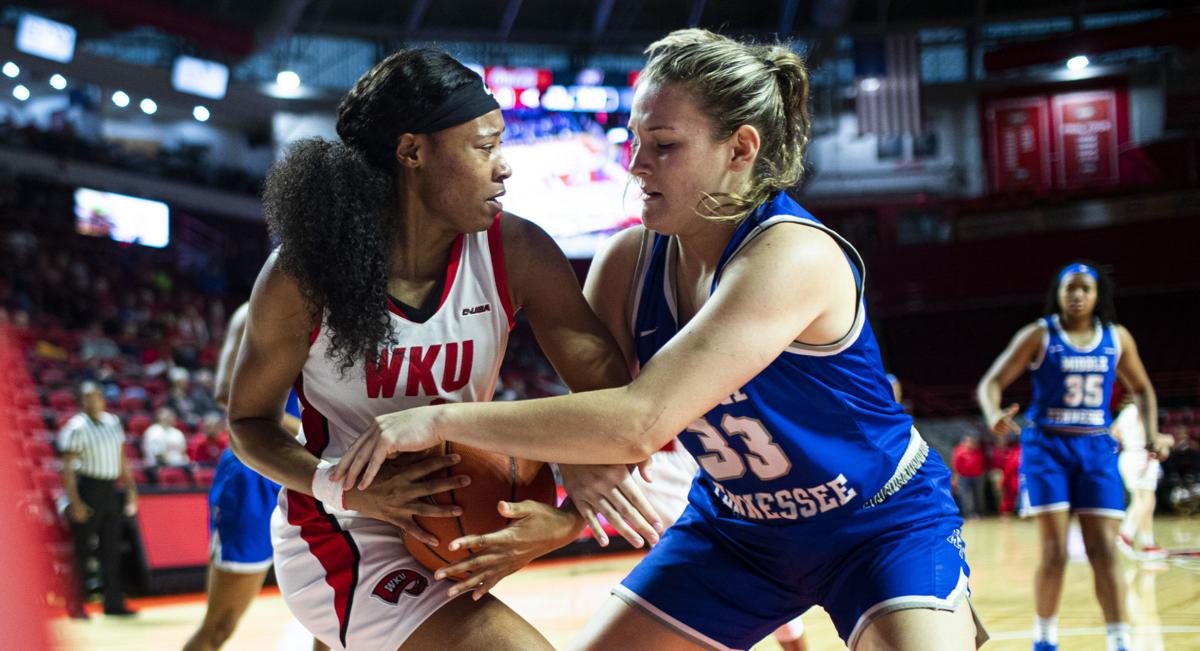 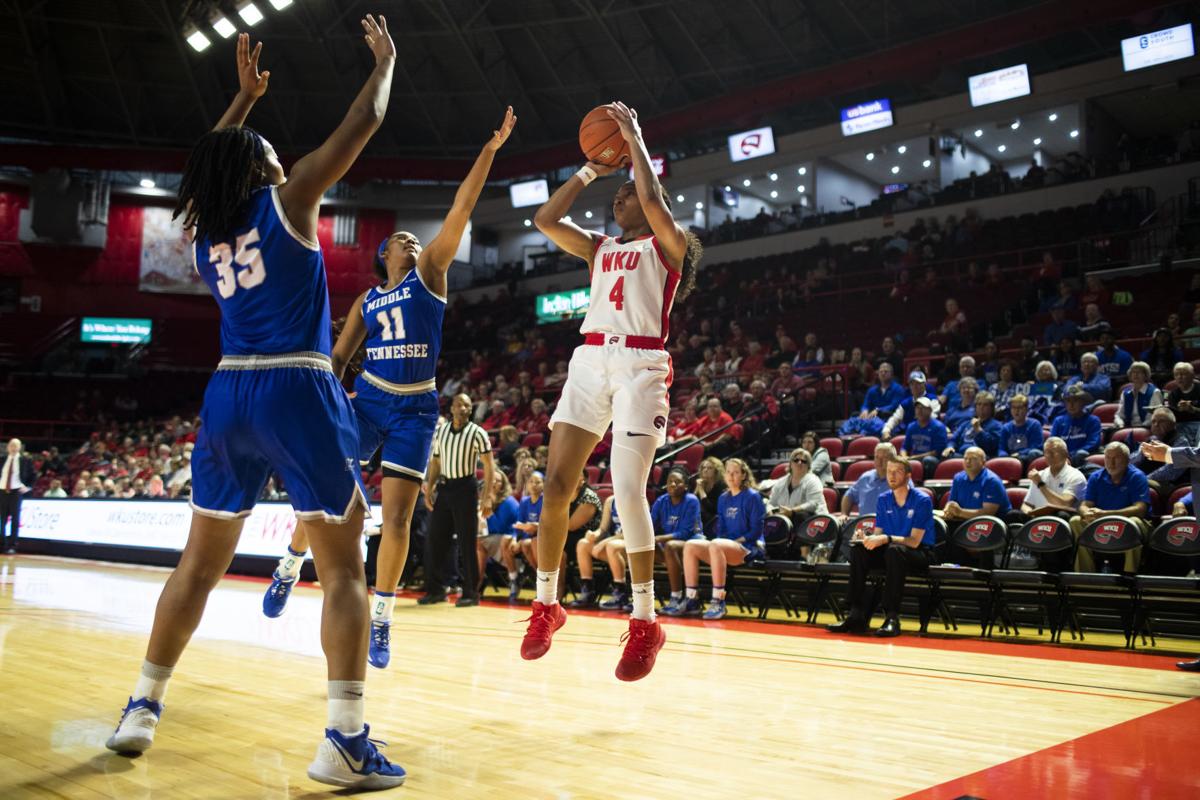 Dee Givens tipped a pass from Middle Tennessee’s Alexis Whittington over the head over Anastasia Hayes, the intended target, chased down the ball and drove to the basket on the opposite end of the floor at E.A. Diddle Arena.

The Western Kentucky redshirt senior missed the wide-open layup, but Meral Abdelgawad was there to grab the offensive rebound. Abdelgawad was fouled on the putback attempt and sank both free throws to start an 11-2 run to open the fourth quarter.

Givens may have missed the opportunity for the easy transition points, but it was plays like that one with 9:31 remaining in what was then a two-point game that helped disrupt Middle Tennessee’s offense in the Lady Toppers’ 71-63 win on Saturday.

“She really stuck to the game plan,” WKU head coach Greg Collins said after the game. “ ... She tends to gamble and she tends to go for those steals, so we’ve really worked hard on making sure she’s part of our team defense and she’s not playing defense by herself. She really did that tonight and she really stuck to the game plan and you could tell it disrupted what Middle wanted to do. She and Sherry (Porter) are the point of that defense and they help a whole lot.”

Givens was a key piece of WKU’s zone that helped slow Middle Tennessee early in the fourth quarter. She contested two of the Lady Raiders’ first three 3-point attempts during the 11-2 run. Middle Tennessee shot just 1-of-9 from beyond the arc in the final 10 minutes, and WKU’s win got the team back to .500 in Conference USA play after an 0-2 start.

The steal to start the run was the final of five in the game for Givens. She had one in the first quarter, but also forced Middle Tennessee’s Anastasia Hayes to travel when she contested a shot midway through the frame. Givens added two steals in the second quarter, along with six points and three rebounds. Her performance in the second was crucial with Raneem Elgedawy picking up her second foul in the final minute of the first quarter and sitting for the entire second period.

Givens added a steal and eight points in the third quarter. She finished the game with 18 points, eight rebounds and two assists, to go along with her five steals, which tied a season high.

Saturday marked her first five-steal game since the Nov. 13 win over Belmont – the second straight five-steal performance in the team’s first three games of the season. The most she had since then before Saturday were three. She did that against Oklahoma and at North Texas. Givens is currently third in C-USA with 32 steals in WKU’s 15 games, good for an average of 2.1 per game.

Creating turnovers is nothing new for Givens, however. The Lafayette graduate had 99 steals last year – the most in Conference USA – and 43 the season before while averaging just over 22 minutes per game. Her 99 steals were second all-time in a season in the program’s history. Kendall Noble had 105 in 2014-15. Givens’ average of 2.8 steals per game in 2018-19 ranked 19th in the country, and led a WKU team that averaged a C-USA-best 9.3 steals per game. Givens had six games of at least five steals last year, including two eight-rebound performances, which is two shy of the program’s single-game record.

It wasn’t a career night for Givens, who is also the team’s second-leading scorer and rebounder at 15.7 points per game and 5.6 rebounds per game, but her defense was big in holding Middle Tennessee roughly five points below its season average. Collins doesn’t believe she’s reached her full potential, either.

“Dee’s a good defender and she’s going to become an even better defender the more she plays and maybe even after she graduates, when she plays professional ball, she’ll become even a better defender,” he said.{&end}