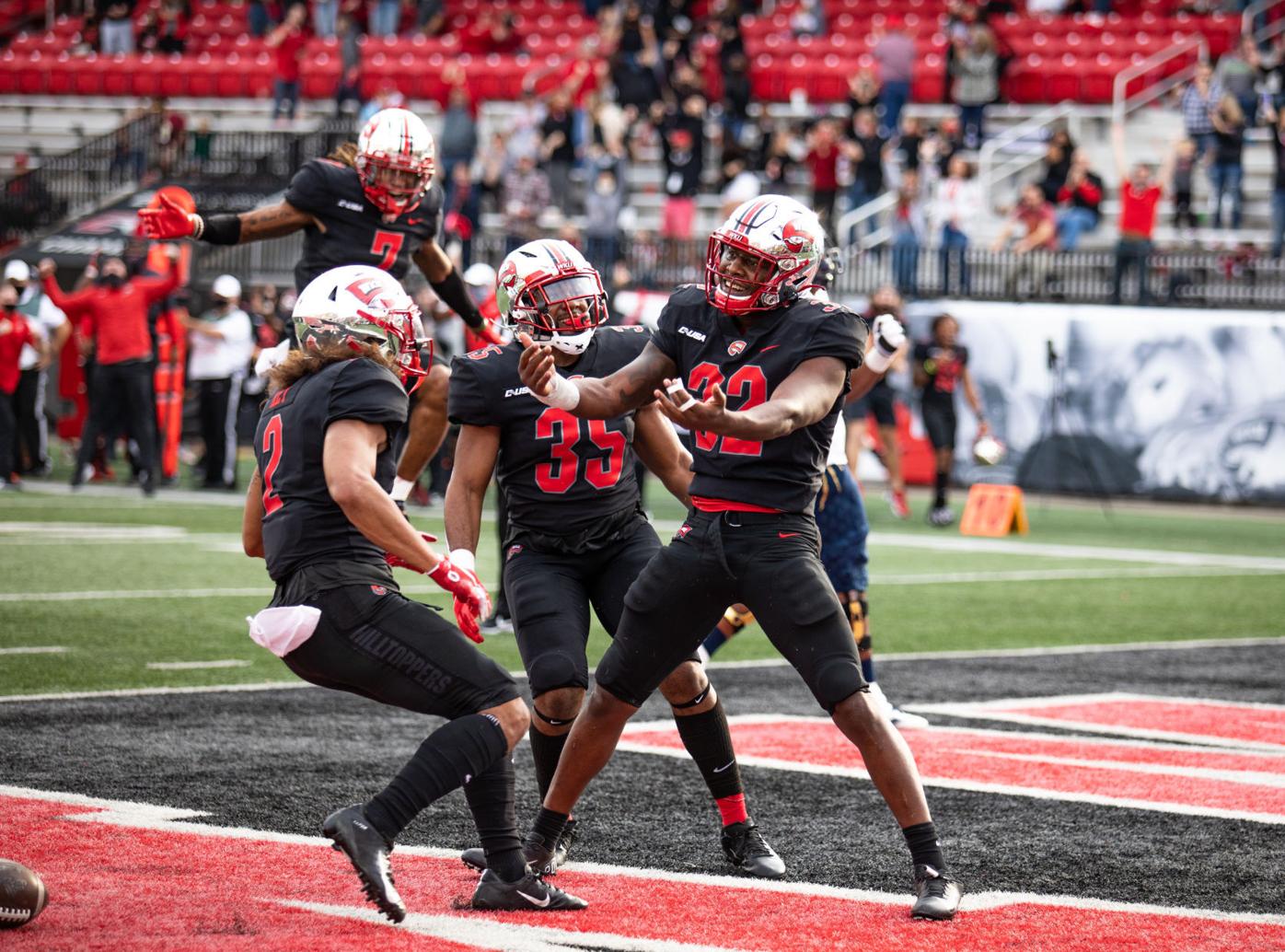 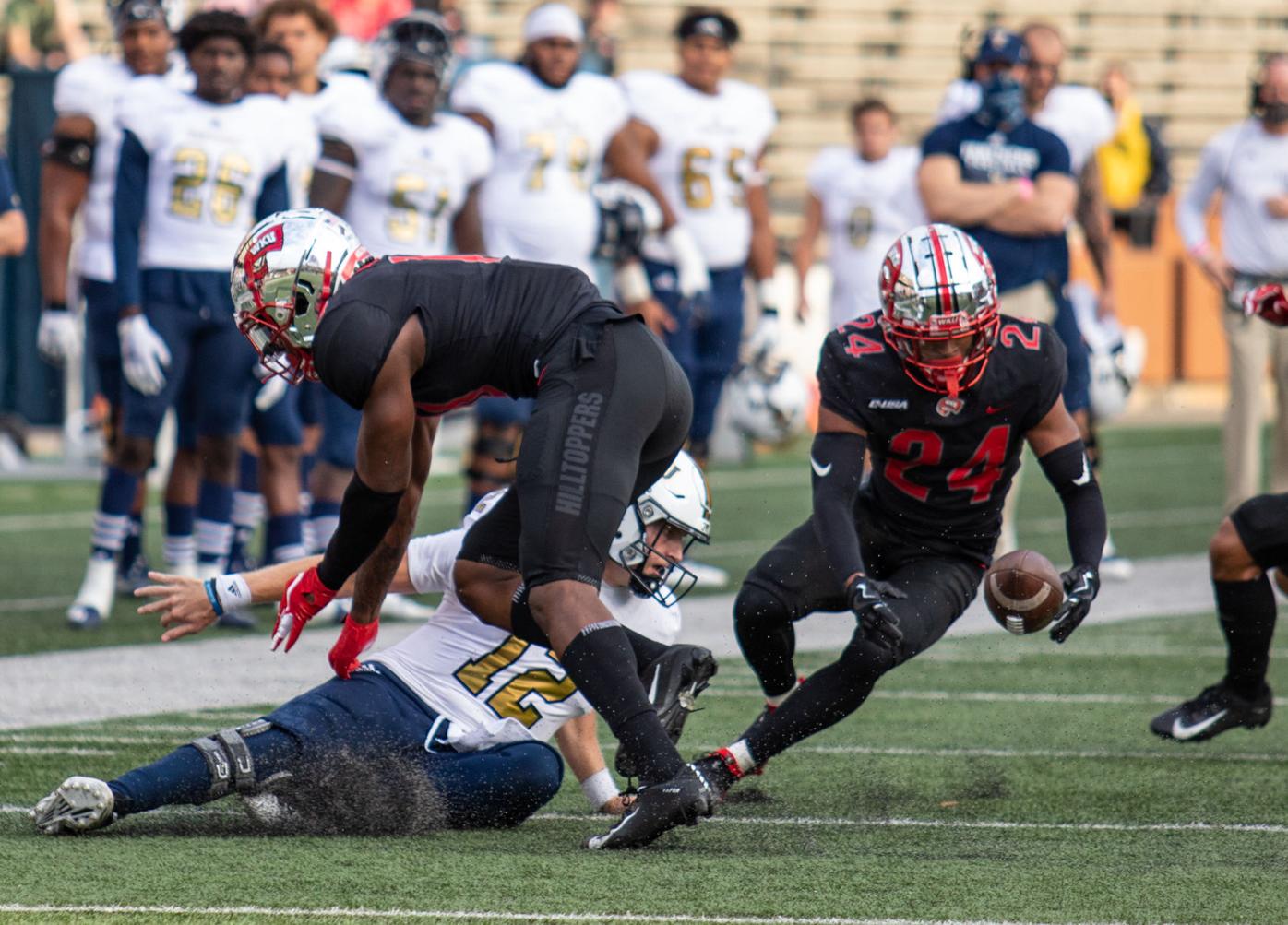 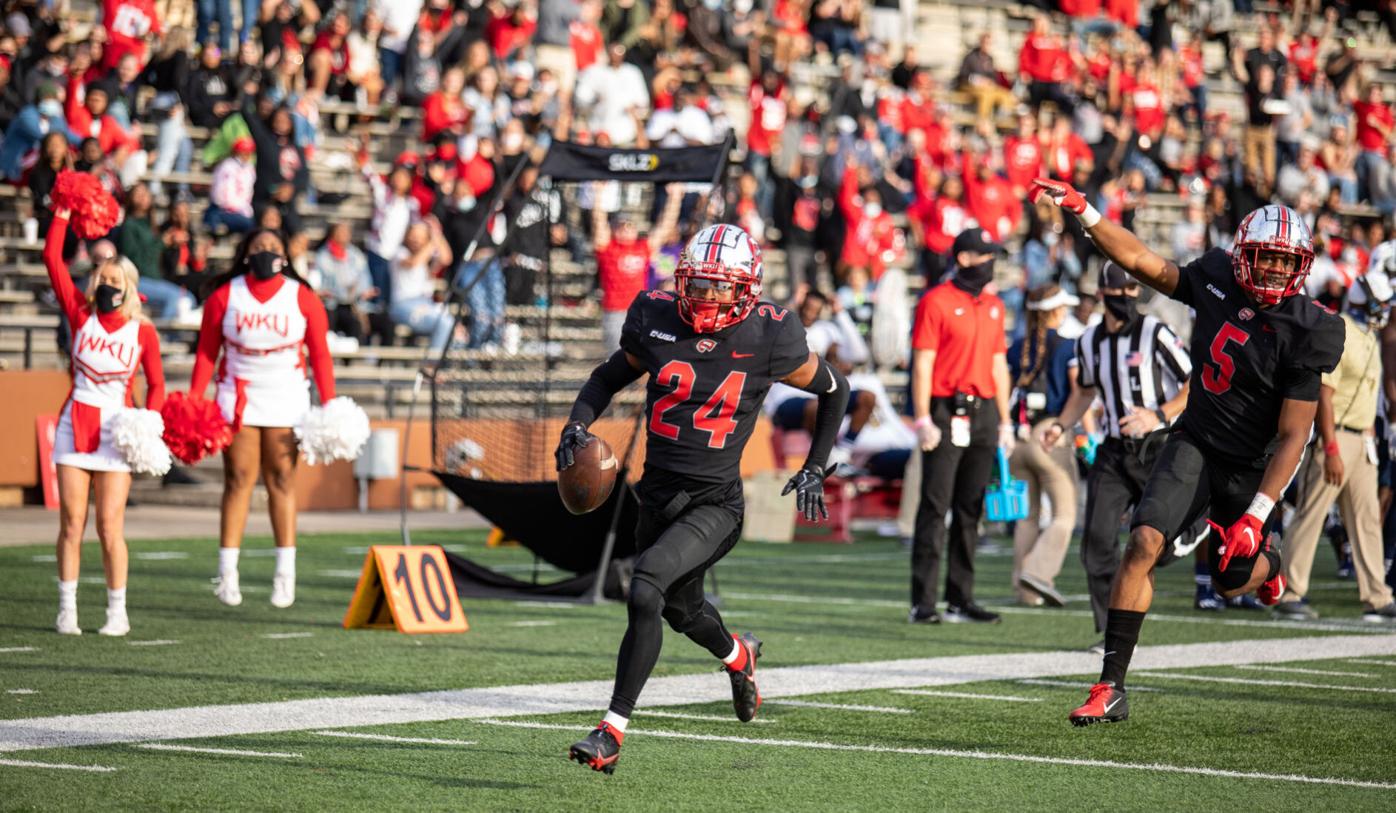 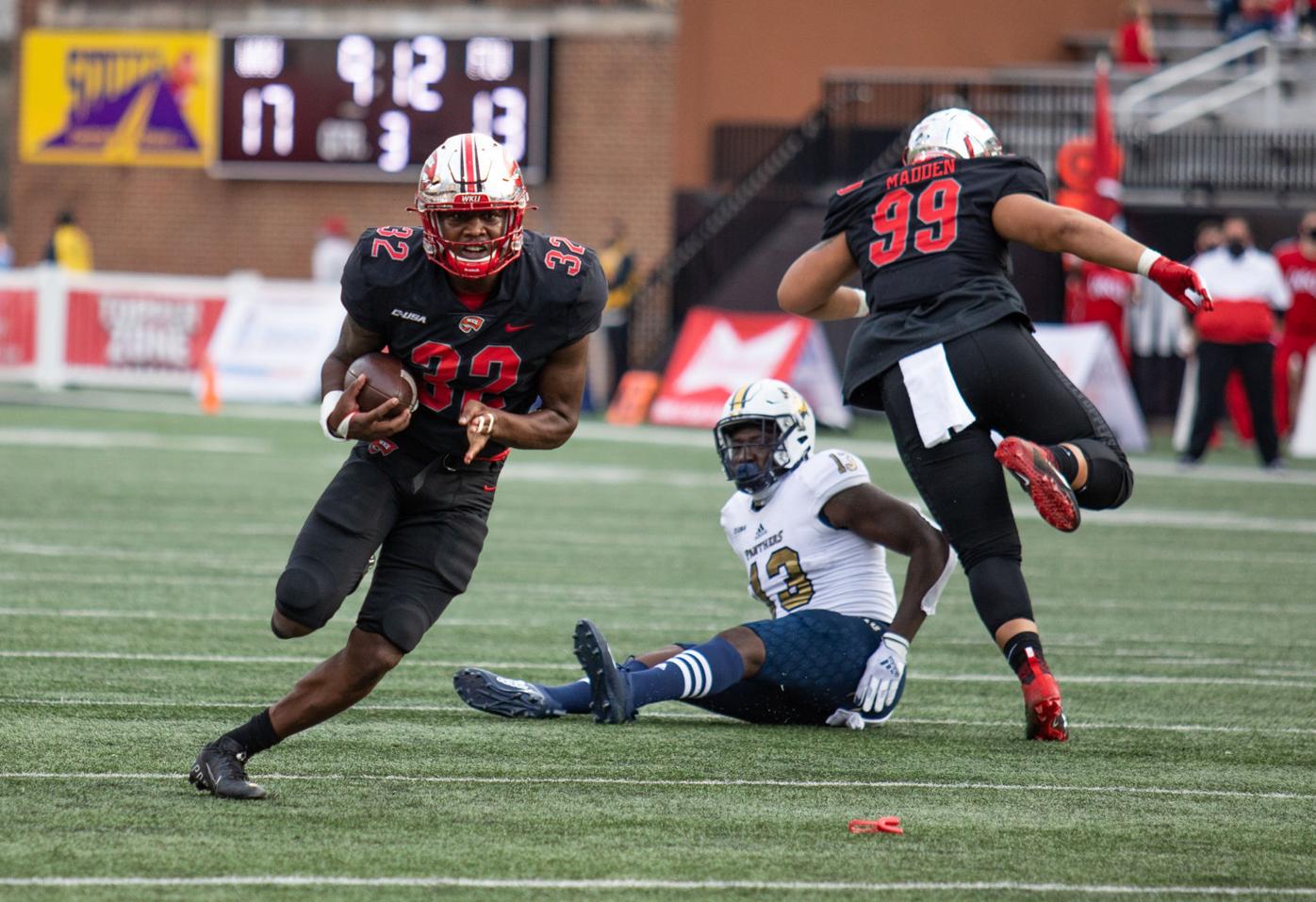 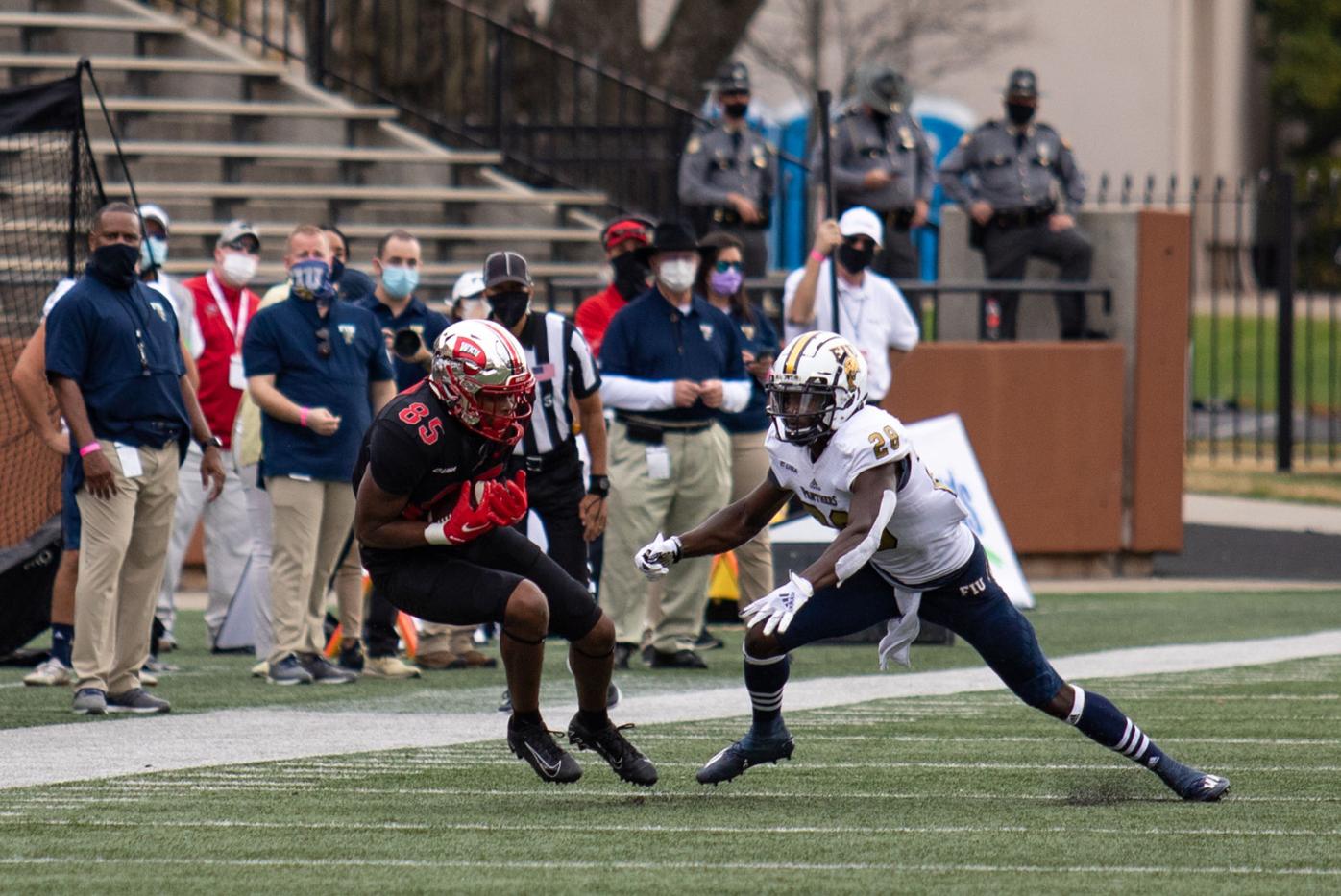 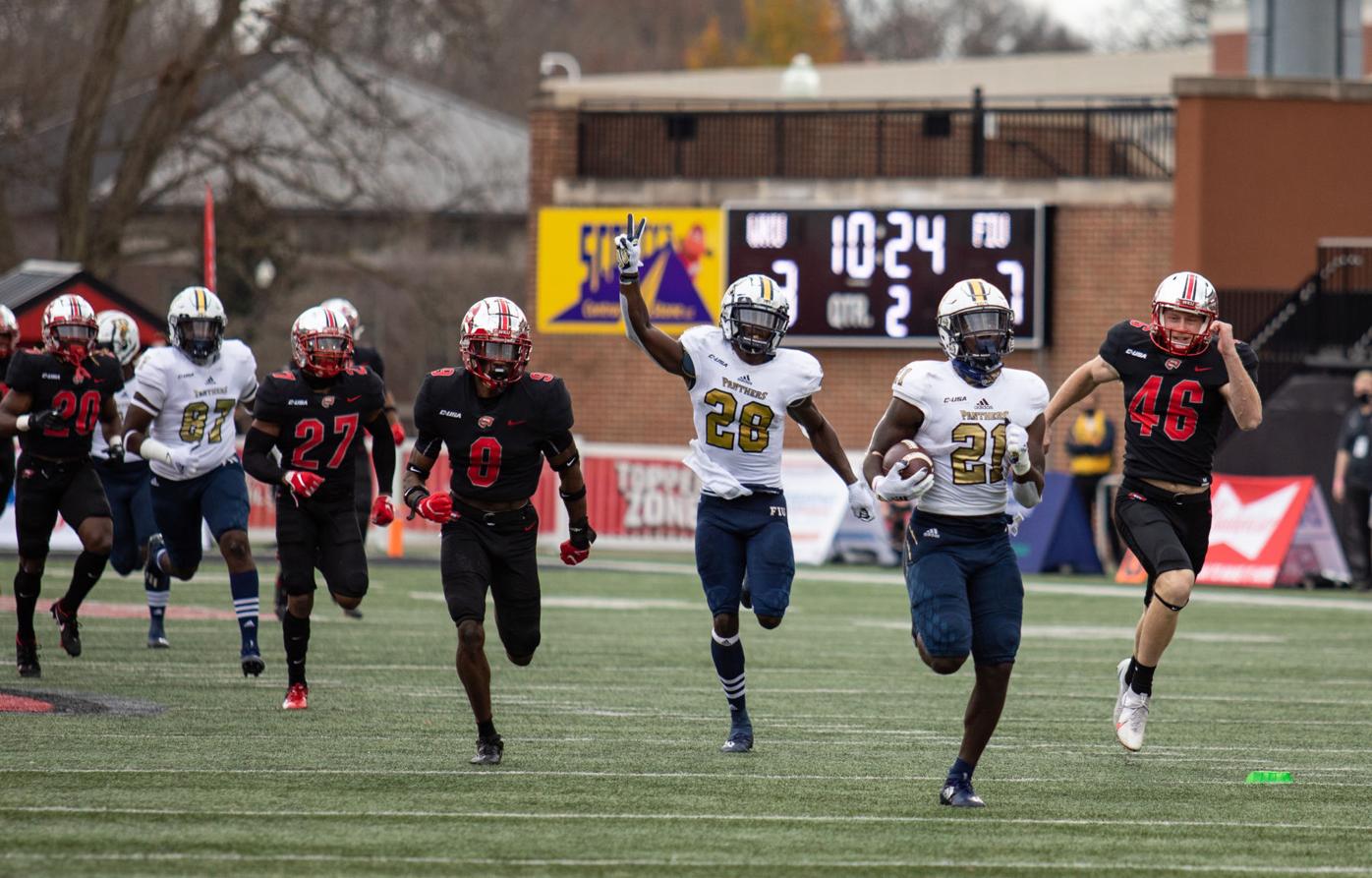 Florida International University running back E.J. Wilson Jr. runs the ball down the field for a touchdown in WKU's 38-21 win against FIU at Houchens Industries–L. T. Smith Stadium on Saturday, Nov. 21, 2020. (Grace Ramey/photo@bgdailynews.com) 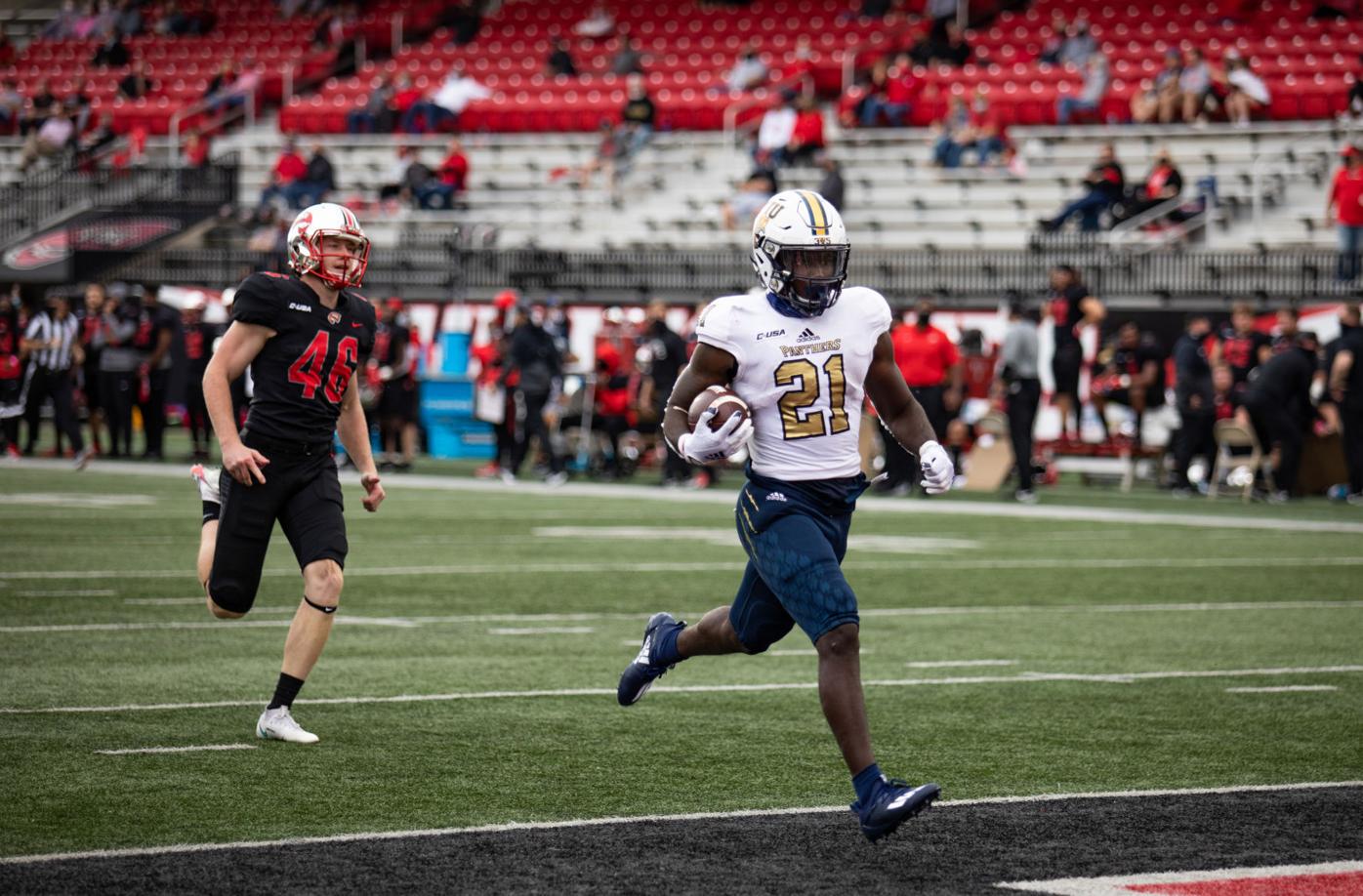 Florida International University running back E.J. Wilson Jr. runs the ball down the field for a touchdown as Western Kentucky University kicker Cory Munson tries to catch up to him in WKU's 38-21 win against FIU at Houchens Industries–L. T. Smith Stadium on Saturday, Nov. 21, 2020. (Grace Ramey/photo@bgdailynews.com) 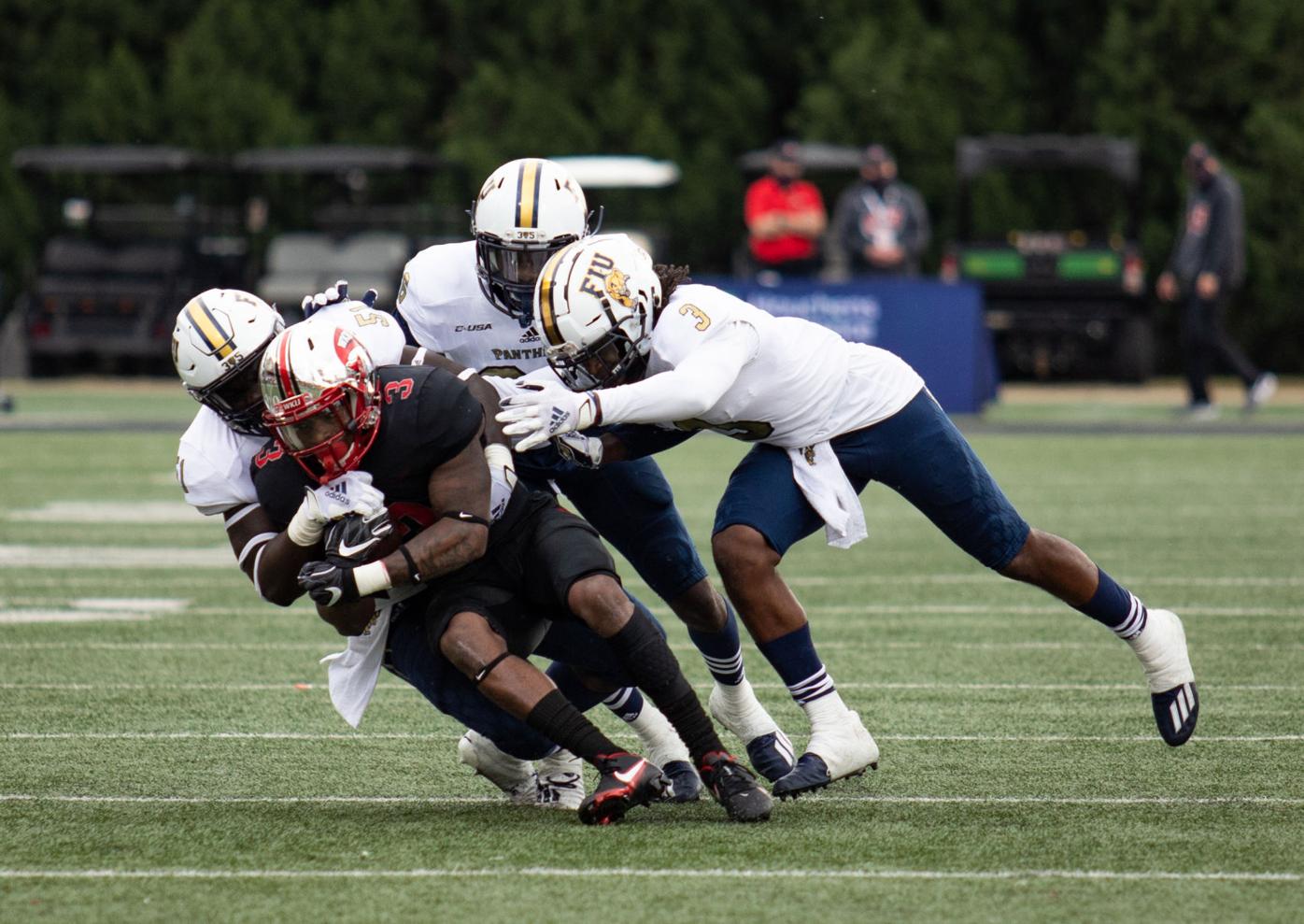 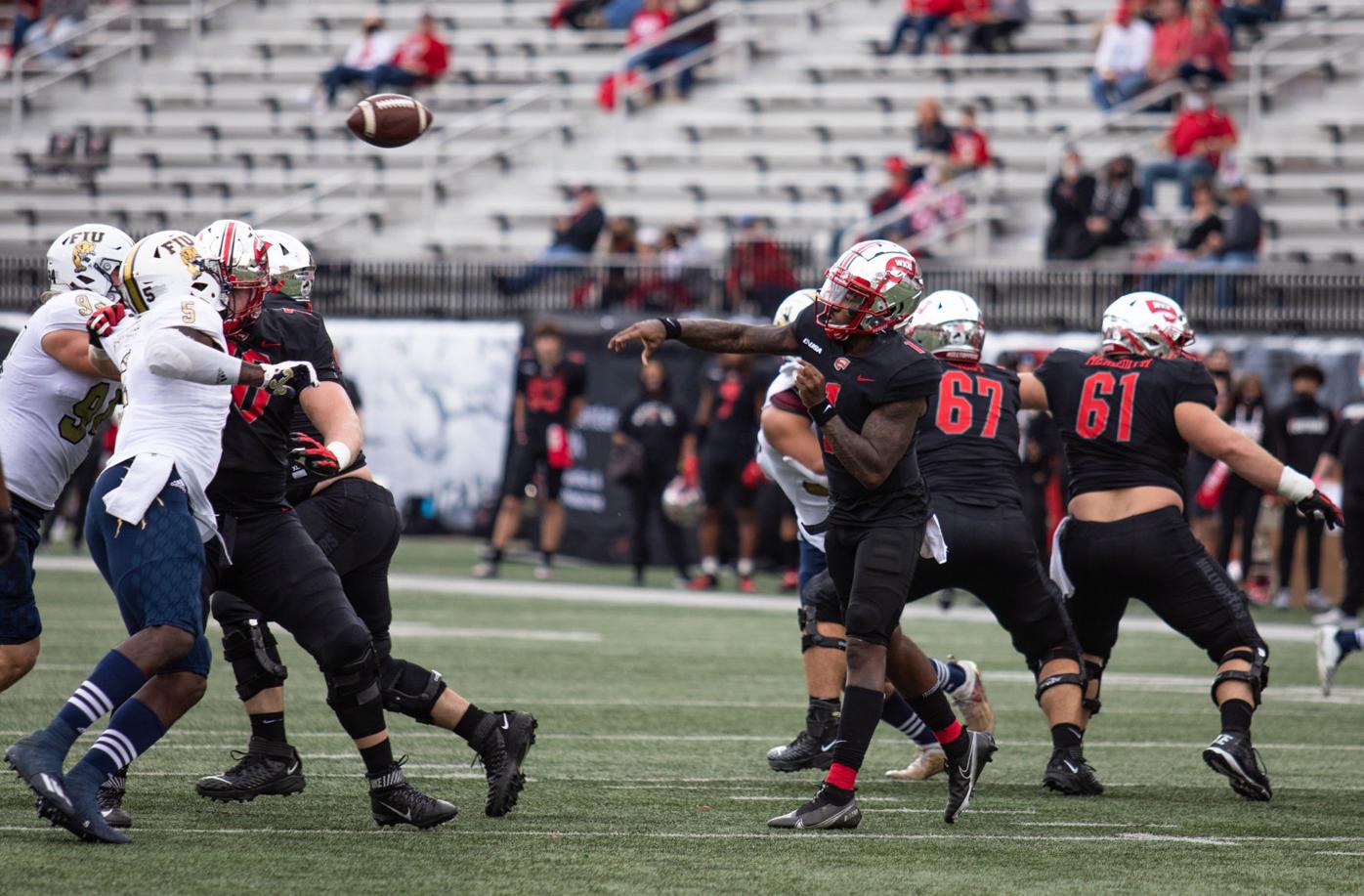 Florida International University running back E.J. Wilson Jr. runs the ball down the field for a touchdown in WKU's 38-21 win against FIU at Houchens Industries–L. T. Smith Stadium on Saturday, Nov. 21, 2020. (Grace Ramey/photo@bgdailynews.com)

Florida International University running back E.J. Wilson Jr. runs the ball down the field for a touchdown as Western Kentucky University kicker Cory Munson tries to catch up to him in WKU's 38-21 win against FIU at Houchens Industries–L. T. Smith Stadium on Saturday, Nov. 21, 2020. (Grace Ramey/photo@bgdailynews.com)

The offense hadn’t been scoring much, so the Western Kentucky defense took matters into its own hands Saturday.

The Hilltopper defense scored on two consecutive FIU plays in the third quarter to highlight a stretch of 35 unanswered points and spark WKU to a 38-21 victory over the Panthers on senior day at Houchens-Smith Stadium.

Trailing 13-10 in the third quarter, DeAngelo Malone forced FIU (0-5 overall, 0-3 Conference USA) quarterback Max Bortenschlager to fumble. Roger Cray recovered and took it 19 yards for the scoop-and-score touchdown. On the Panthers’ next play, Bortenschlager was picked off by WKU (4-6, 3-3) linebacker Eli Brown, who returned it 22 yards for a touchdown that put the Hilltoppers ahead 24-13.

“Man, all I knew was I was going to score – no if, ands or buts about it,” Brown said. “I see the big dude drill outside, came back in the middle and I had to hit it with the dive.”

The defense entered the game with a string of strong play – the Hilltoppers had allowed just two touchdowns in the previous 10 quarters it played and had the best pass defense in C-USA – but White, WKU’s defensive coordinator, wanted his crew to force more turnovers. On Saturday, WKU got them when it needed them most, and it led to victory.

“While it’s going on, my eyes are set on certain spots. I think we called a dog on the run and Malone was the contain player and the ball was kind of running that way,” White said. “I heard coach (Maurice) Crum say, ‘Scoop it, Cray.’ I was like, ‘What?’ because I’m on the sideline and he has a better view.

“On the next one, I actually watched Eli do that and I was just glad he caught it. He took a chance on the play, and made the play and scored. It was perfect timing. I think the team, the sideline, needed to see that kind of stuff, and our players more importantly put in the work and want to see it come to fruition at some point.”

WKU gave up 263 yards total, and the Hilltoppers allowed just 106 yards passing to Bortenschlager – 147 total to the Panthers. WKU recorded 10 pass breakups, with three from Cray, and had eight quarterback hits, with Malone accounting for four. D’vonte Price led FIU with 100 yards rushing on 24 attempts.

WKU’s offense, which hadn’t scored multiple touchdowns in a game since a 37-14 loss at UAB on Oct. 17, fed off of the defense to help the Hilltoppers to their most complete game of the season – something Helton had been waiting on.

Gaej Walker scored on a 1-yard run in the fourth quarter that he set up with a 54-yard run two plays before, and finished with 127 yards on 17 carries. He became the first Hilltopper to cross the century mark in yards rushing in a game this season.

“I think (the biggest key) was just being able to run the ball downfield, be able to do different things like that,” Walker said. “I feel like the defense in the third quarter gave us some momentum, so that helped us as well.”

Tyrrell Pigrome added a 4-yard scoring run with 9:23 to play to make it 38-13. The score was set up by a 28-yard run from Jakairi Moses the play prior.

WKU had 278 yards of offense in the game. Pigrome threw for 121 yards on 14-of-25 passing, with Mitchell Tinsley leading the receiving corps with 28 yards on three receptions. Moses had 43 yards on six carries.

“When our defense scores, it takes pressure off of your offense and gave us some flexibility to do some things,” Helton said. “I think our guys were pretty loose all day. I think the sideline was fantastic. We had talked a lot about that and it was just a great feeling to see it all come together.

“To have the performance we had on defense with the two scores was outstanding, and offensively putting several drives together that resulted in touchdowns was good to see. ... A lot of things we had talked about during the season finally came to fruition today.”

FIU scored with 18 seconds left on a 1-yard keeper from third-string quarterback Kaylan Wiggins to cap off a 21-play, 75-yard drive. The Panthers are scheduled to host Louisiana Tech next week.

The Panthers scored on their first possession when Bortenschlager connected with J.J. Holloman on a 28-yard pass and took the lead into the second quarter.

WKU got on the board with 10:33 to play in the first half on a 39-yard field goal from Brayden Narveson, but FIU answered with a 100-yard touchdown return from E.J. Wilson Jr. on the ensuing kickoff. Chase Gabriel missed the extra point, making it 13-3.

Pigrome ran the ball in from a yard out with 43 seconds left in the first half to finish an eight-play, 65-yard drive that cut the deficit to three at halftime.

The NCAA Division I Council in August approved a blanket waiver to give fall sport student-athletes an additional year of eligibility and an additional year to complete it. Helton said he gave those players some flexibility on whether they wanted to be honored or not Saturday.

“I think, for the most part because it’s a different year, we came to all the seniors and said, ‘Hey, if you want to walk’ – I think what you saw out there were guys that, for some of them it was their last time at home, and for others they may not be ready to hang it up and they want to make sure, though, that they had that experience just in case they decided to hang it up,” Helton said.

Saturday was also the first time WKU won back-to-back games this season. The Hilltoppers were coming off a 10-7 victory over Southern Miss, and are scheduled to travel to Charlotte next week for their final regular-season game.{&end}