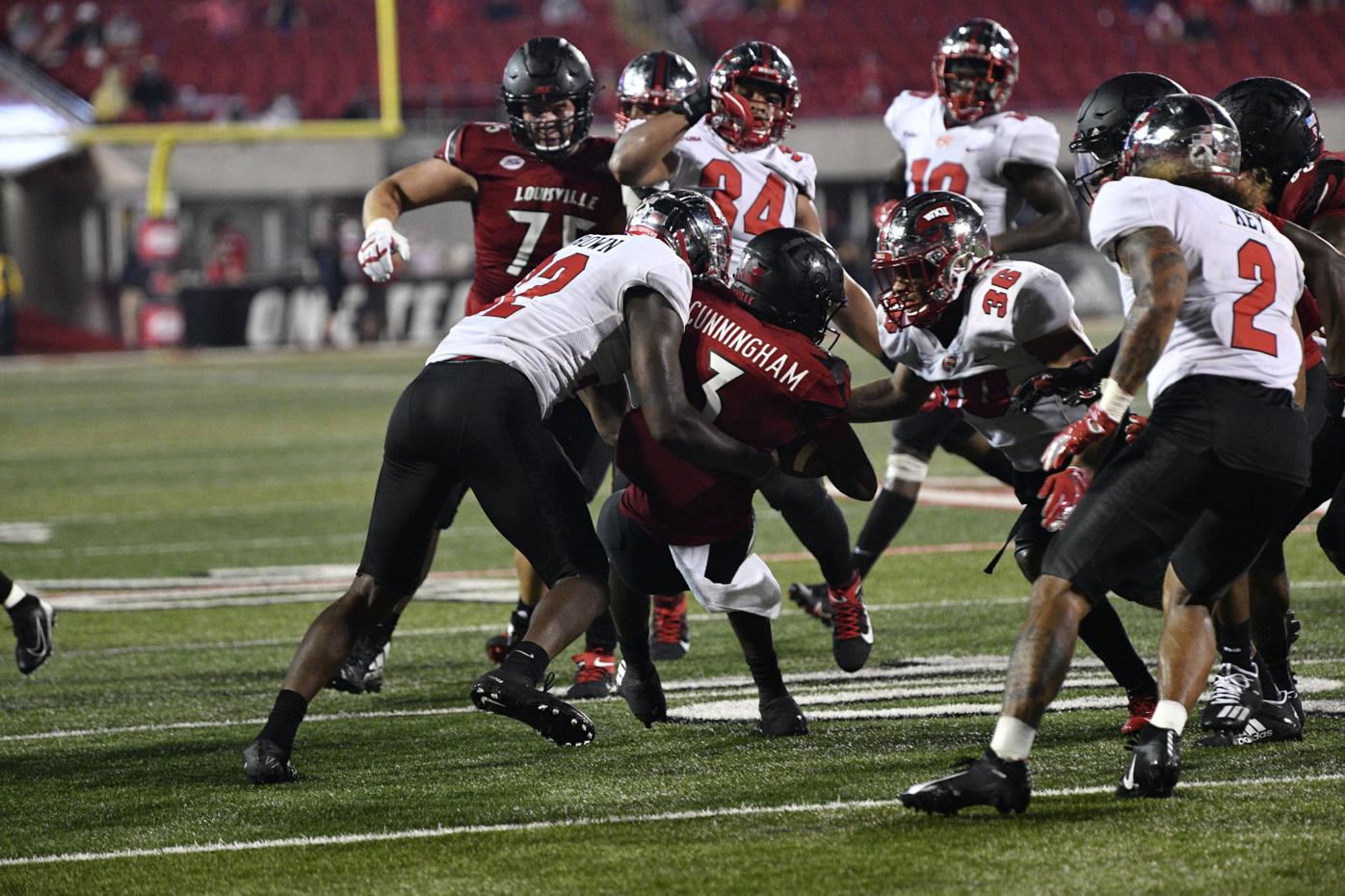 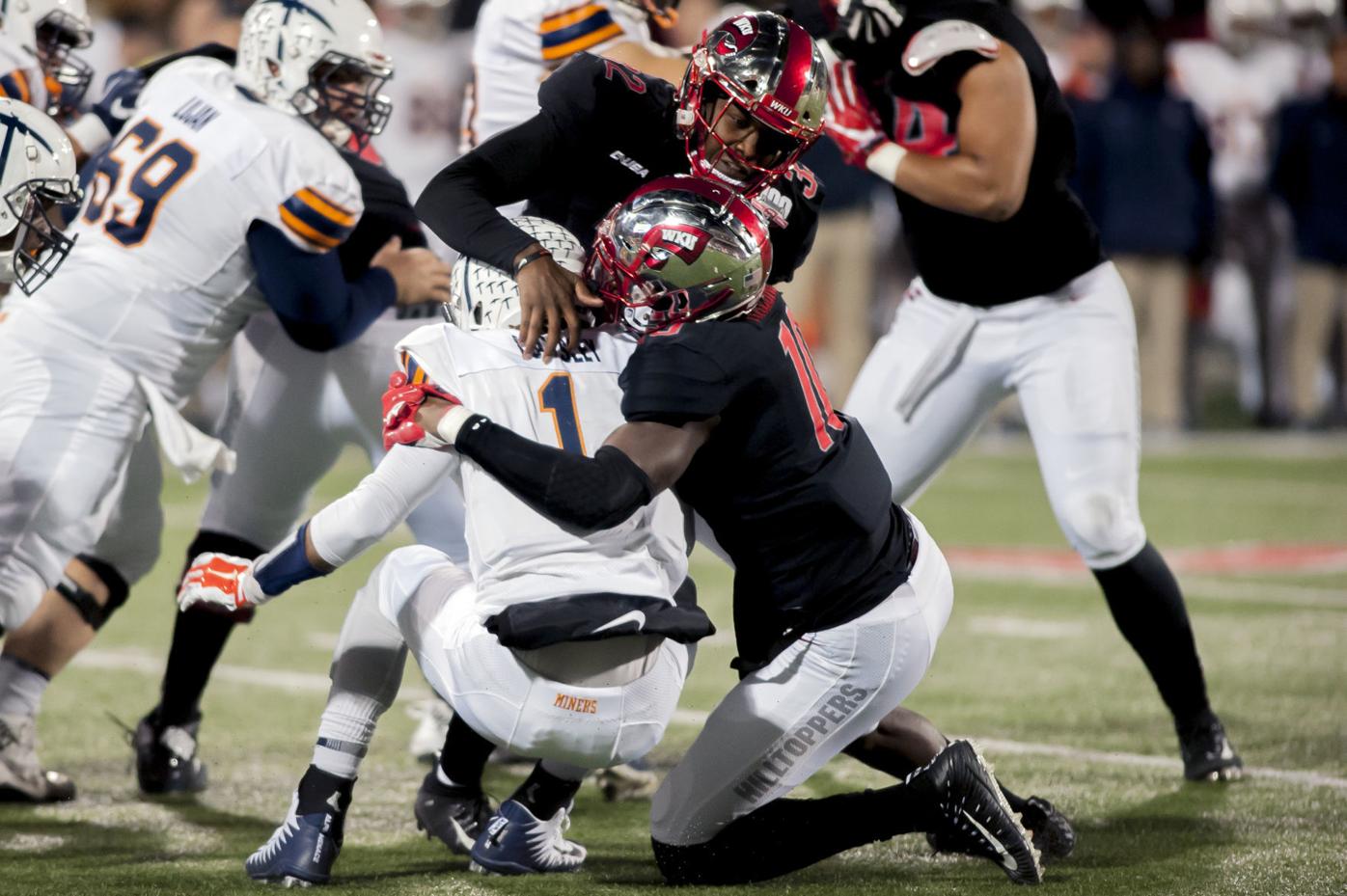 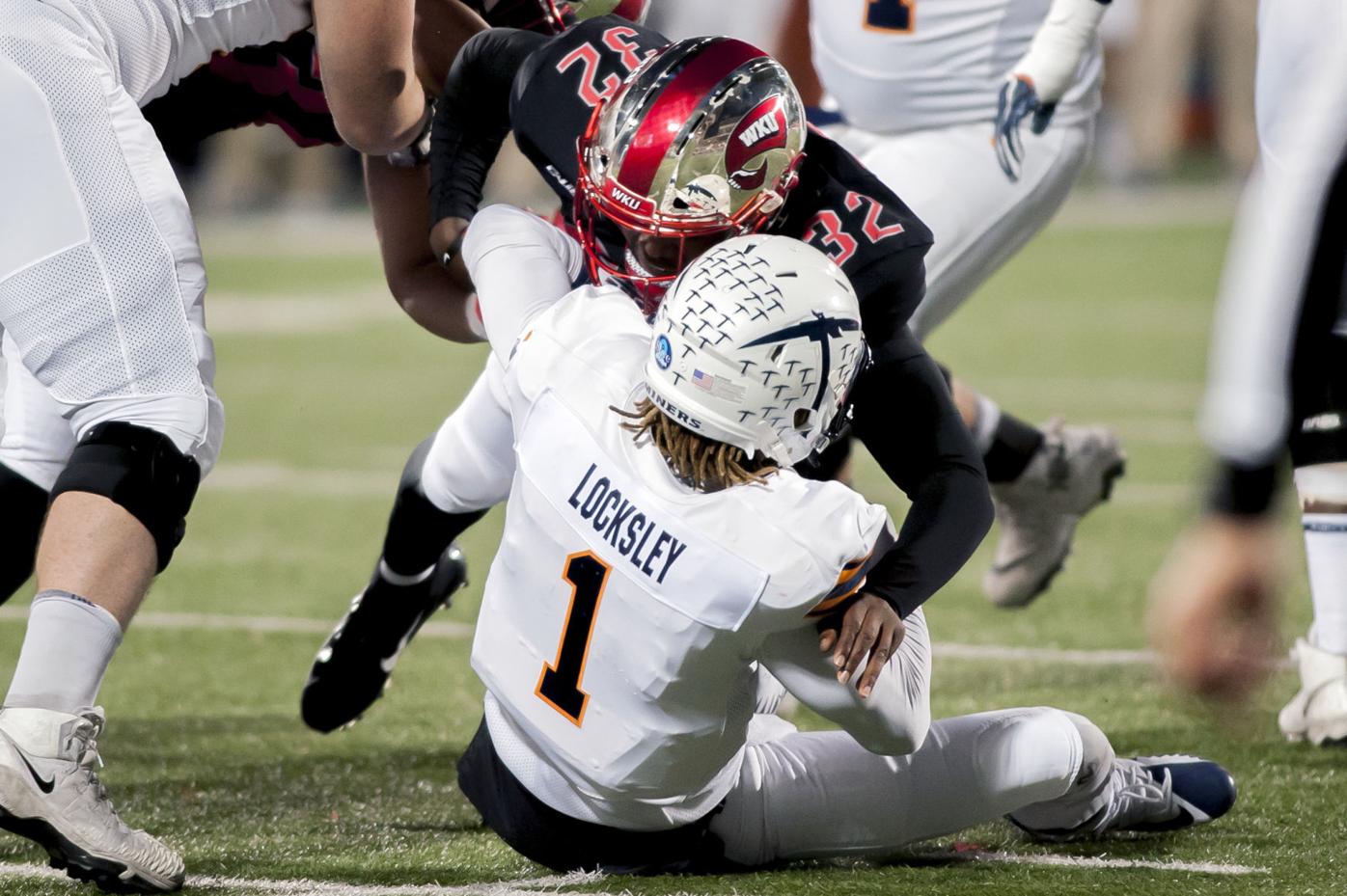 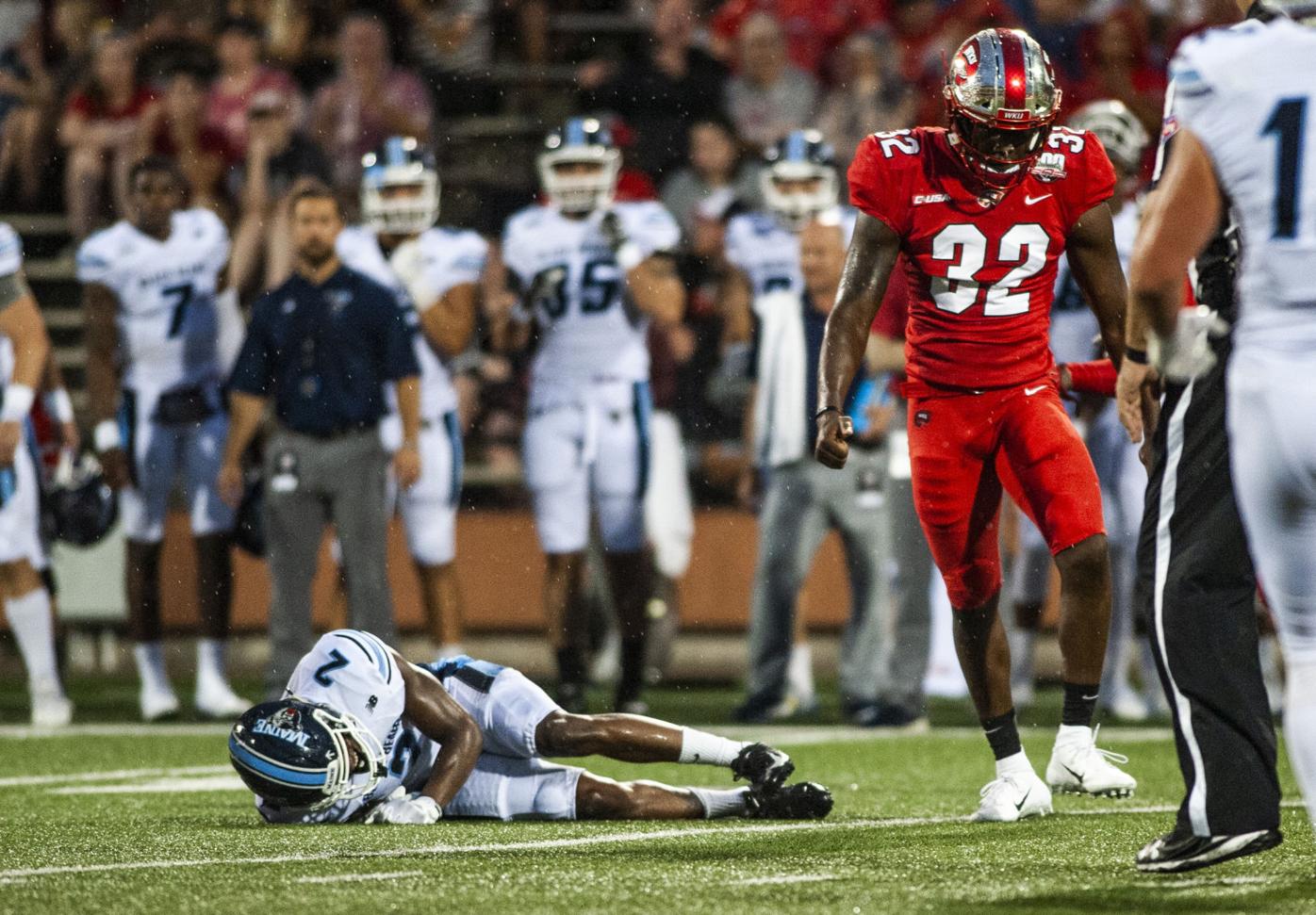 Western Kentucky linebacker Eli Brown (right) stands after delivering a hit Sept. 8, 2018, during the Hilltoppers’ 31-28 loss to Maine at Houchens-Smith Stadium. After missing last season due to injury, Brown is healthy and happy to be playing again for his hometown team.

Louisville faced third-and-18 from its own 17-yard line on the first series of Saturday’s season opener against Western Kentucky, and Eli Brown knew what to expect.

The linebacker rushed in and stopped Cardinals quarterback Micale Cunningham near the line of scrimmage to force fourth down, and let his excitement be known with a celebration that was followed by a pat on the back from defensive end Juwuan Jones and one on the helmet from tackle Jeremy Darvin.

“On that play, I kind of already knew they were going to run a quarterback draw just by the formation,” Brown said Wednesday in a Zoom conference with reporters. “I kind of bailed on my responsibility, I took a risk and just hit it and made the big play.”

The tackle came just a handful of plays into the game, but Brown said the tone was set as soon as the team stepped off the bus and onto the field at Cardinal Stadium.

It had been 658 days since Brown had last appeared in a football game. He had transferred to WKU from Kentucky and played sparingly in his first season on The Hill, then an Achilles injury suffered in the 2019 spring camp left him out all of last fall. After uncertainty if the 2020 season was going to be played because of the coronavirus pandemic, Brown said, despite a 35-21 loss, getting to play again was exactly what he needed.

“It had been a while, a long time since I had touched the field,” Brown said. “I knew when I touched that field I was going to go full speed the whole time I was out there. It felt great. I got to play in front of my family again. It’s everything I needed.”

Brown finished the game with eight total tackles – tying DeAngelo Malone and Antwon Kincade for most on the team – and had one tackle for loss. Defensive coordinator Clayton White credited Brown’s preparation throughout the week for a solid return to game action.

“I was proud of Eli,” White said Wednesday. “It’s kind of hard coming back playing a position like a linebacker and you haven’t been playing for a year. I feel like he did a good job.”

It had been a long path to that point for Brown. He came to Bowling Green after moving around south Florida during his youth and credits his coaches at Moss Middle School for teaching him the game and believing in him. He started his high school career at Warren Central before transferring to Warren East, where he became a four-star recruit and the state’s No. 2 prospect in the Class of 2015.

He continued his career at Kentucky, but redshirted his first year in Lexington while still recovering from a torn ACL suffered while at Warren East and while working to add weight – he was listed at 208 pounds then.

Brown entered the rotation the next two seasons, appearing in 22 games and registering 62 total tackles, but family matters made living away from Bowling Green difficult. Brown’s mother had died, and he was looking after his younger sisters who were previously in foster care. He decided to transfer to WKU, tweeting his intent in March 2018. The school announced July 13, 2018, his addition to the roster and his immediate eligibility.

He played in 11 games his first season as a Hilltopper, recording 25 tackles, two pass breakups, a quarterback hurry and a fumble recovery. The Hilltoppers went just 3-9 that year in the final of two seasons under Mike Sanford.

Strong hopes for a final college season in 2019 were quickly ended. Brown suffered an injury during a scrimmage that left him out for the rest of spring practice, and later the entire 2019 season.

“Man, you go down a dark path for a while,” Brown said. “You go through a minute of, ‘Is it worth it? Do I want to continue to put my body through this?’ Stuff like that, but then you’ve got to sit back and realize why you’re playing the sport. Do you love the sport? Do you not? I think the people who come back from multiple injuries, it gets to the point of do you actually love the sport?

“It’s all I know. All I care about is playing football, so there was no question about me coming back and playing in front of the fans and playing for Bowling Green, because one thing I want to do is leave a stamp in the city of Bowling Green.”

White and now-co-defensive coordinator and linebackers coach Maurice Crum used the time to help improve Brown for his return. It involved adding weight, getting stronger and learning the Hilltoppers’ 4-2-5 defense better.

“That’s why he didn’t play as much the first year he was here, because of growing pains with the system, and I think Eli has mastered the system now to a point where he can kind of start playing himself and becoming himself and the Eli Brown most people around here know,” White said.

Brown said he got up to 225 pounds – the heaviest he’s been in college – before the coronavirus hit and shut down campus activities. He’s currently listed at 6-foot-2, 220 pounds on the roster, and says the added weight has him feeling more toned out with a faster recovery time after games.

Saturday’s 11 a.m. game against Liberty is the home opener at Houchens-Smith Stadium, and marks the start of a final stretch of games family and friends will be able to see Brown play in Bowling Green. The Hilltoppers also have scheduled home games Oct. 10 against Marshall, Oct. 24 against UT Chattanooga, Nov. 14 against Southern Miss and Nov. 21 against Florida International.

It’s a bittersweet feeling for Brown, who’s had old coaches, teammates and teachers telling him they can’t wait to see him play again. His family eats and breathes sports, he says, and it’s the thing that brought them all together, but he says he’s the last in the family still currently playing.

Now he wants to go out with a bang in the town where his football career started.

“It’s everything I’ve been waiting on,” he said. “The fact that all my old coaches and teammates are always hitting me up, telling me ‘I can’t wait to come watch you play.’ I’ve got old teachers talking about ‘We excited to see you play.’

“It’s just the fact of playing at home in Bowling Green – my city. I’m going to have to give it the best game I’ve got because a lot of people counted me out, saying, ‘Man, you tore an ACL in high school, Achilles now, how can you come back?’ Now it’s just proving the point, because I feel like everybody forgot about Eli Brown for a minute.”{&end}

Tops look for win vs. Liberty heading into open week