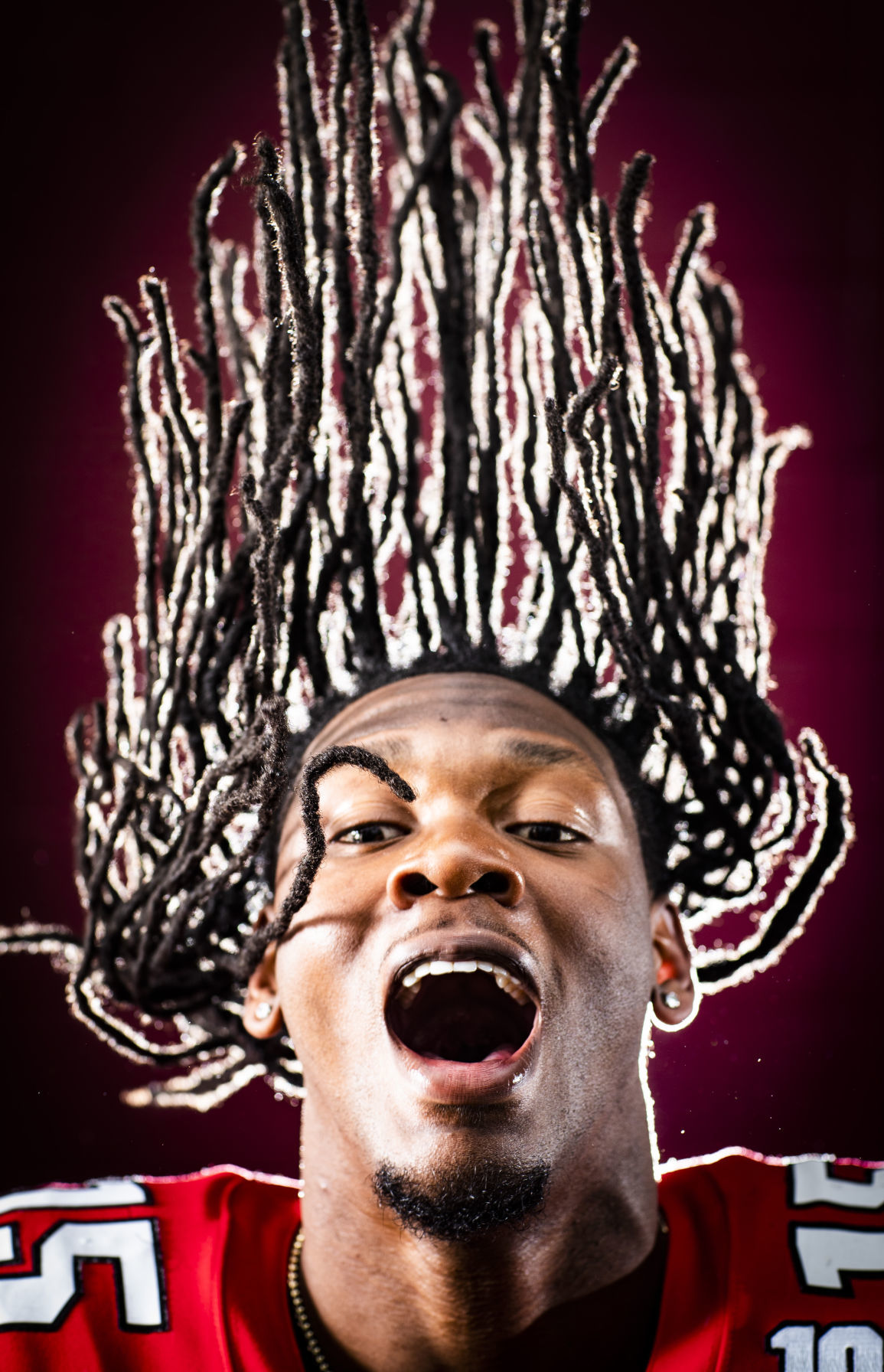 Defensive back Ta’Corian Darden poses for a photo on Wednesday, August 22, 2018, at Houchens-Smith Stadium. (Austin Anthony/photo@bgdailynews.com) 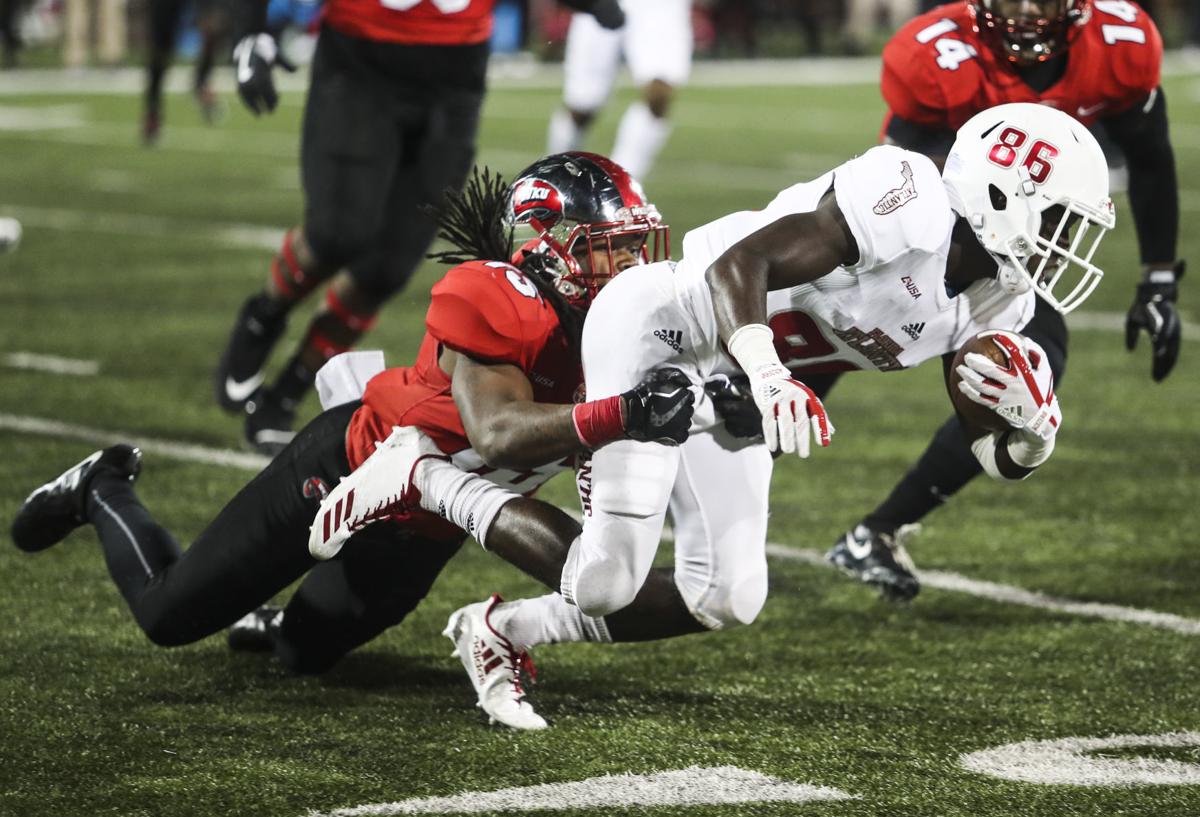 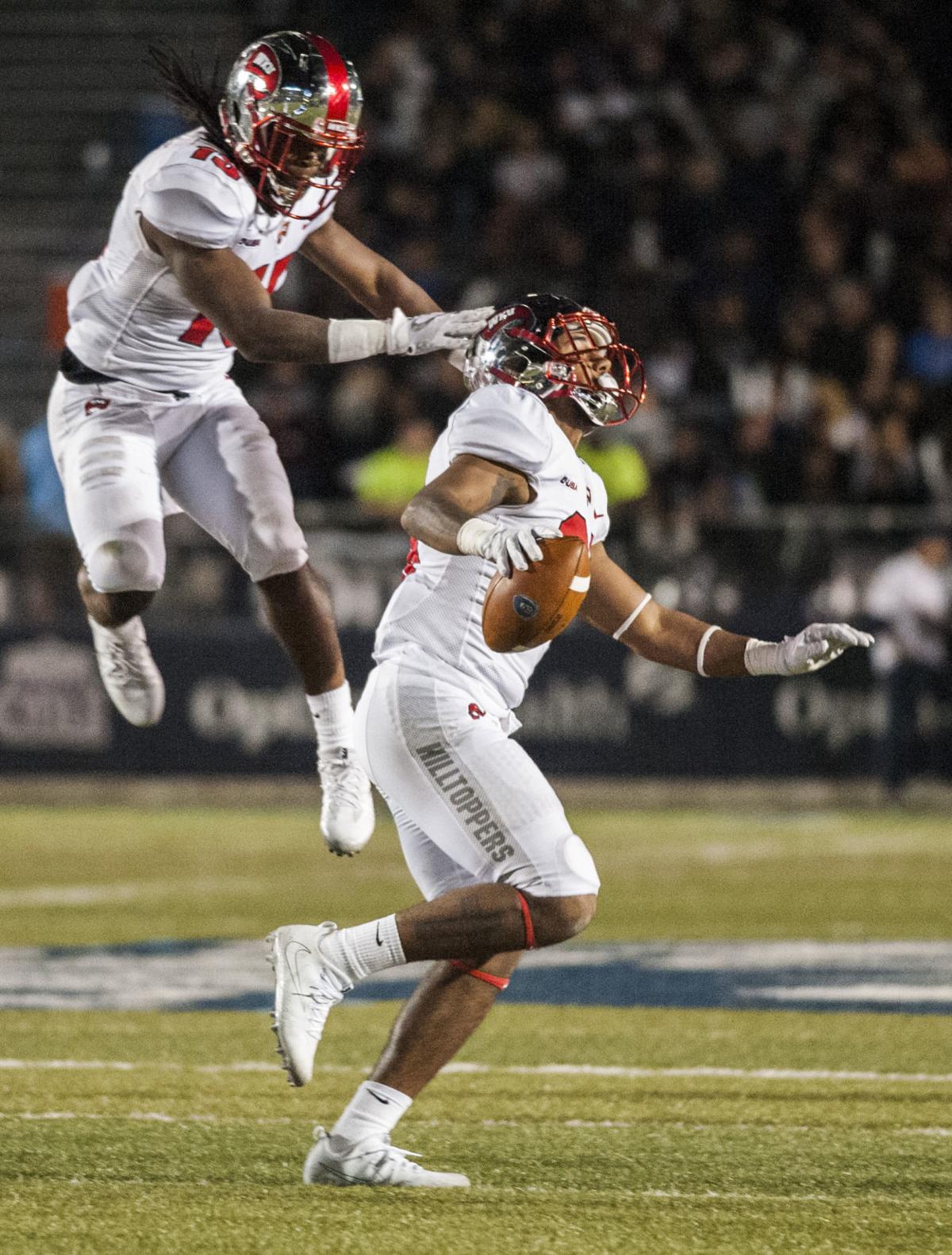 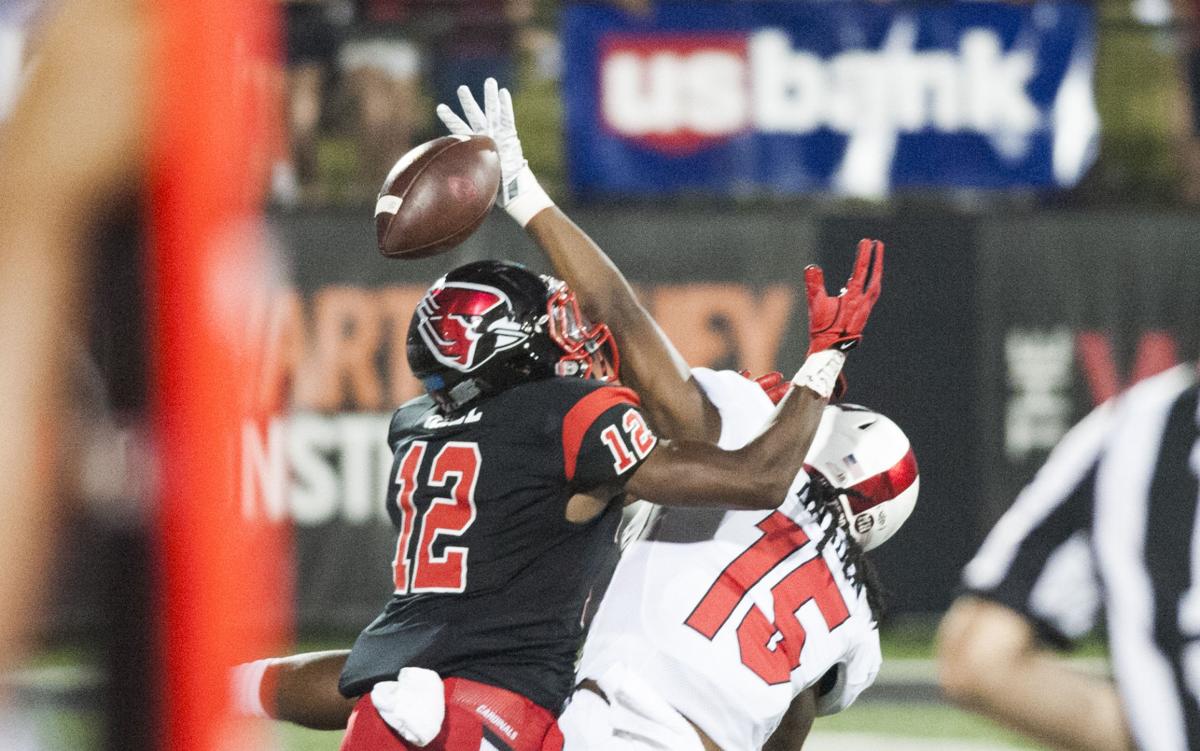 Defensive back Ta’Corian Darden poses for a photo on Wednesday, August 22, 2018, at Houchens-Smith Stadium. (Austin Anthony/photo@bgdailynews.com)

The Western Kentucky nickelback is a local kid from nearby Russellville. He joined the Hilltopper program as an undersized walk-on, worked hard and earned a scholarship. Then came a starting spot on the team’s defense.

But coach Mike Sanford sees the redshirt junior nicknamed “CoCo” as more than someone to cheer for. He called Darden “the MVP” of WKU’s fall camp and expects the defensive back to be one of the Toppers’ best players in 2018.

“CoCo is a baller,” Sanford said. “He loves the game and he plays the game the way it’s supposed to be played. ... He’s the ultimate competitor.”

Darden enjoyed a breakout 2017 season for coordinator Clayton White’s WKU defense. He took over as the Hilltoppers’ starting nickelback for the team’s fourth game and never relinquished that spot.

The Russellville High School grad appeared in 13 games, starting 10. He ranked fourth on the team in tackles (71) and third in tackles for loss (6½) while also breaking up six passes.

Darden was a difference maker in a WKU secondary that was a strength for a team that finished 6-7. The 5-foot-9, 190-pound DB is ready to be a key contributor once again in 2018.

“You just want to go out there and continue to build on your success,” Darden told the Daily News last week. “It’s a more comfortable feeling having gone through a season (as a starter), but it’s a new season and anything can happen.

“I’m a new player, a better player. I feel comfortable being a better and smarter player out there.”

Darden’s climb has taken him from the smallest level of Kentucky high school football on Fridays to FBS stadiums on Saturdays.

Darden was a versatile star for Russellville HS, which competes in Class A of the six-level KHSAA football system. As expected with a talented player at a small school, he did it all for the Panthers.

In high school, Darden split his time between quarterback, wide receiver and safety. He scored 20 touchdowns as a senior by way of 10 passes, eight carries, one catch and one interception return.

“... What separated him from everyone else was his work ethic.”

WKU assistants from then-coach Jeff Brohm’s staff took the trip west on US-68 to see Darden. They didn’t have a scholarship to offer, but they gave him the chance to walk-on with the Tops in the fall of 2015.

“I thank God for allowing coaches to come and see my talent,” Darden said. “Class A and not 6-foot, it sets you behind a little. I guess coaches saw something in me that was a football player.”

NCAA rules allow FBS programs to allocate 85 full scholarships among the players on their rosters. Players not on scholarship are on their own when it comes to paying for tuition and fees, room, board and books.

Darden said student loans and “help from family” allowed him to get through his first two years of college. All the while, he set his sights on becoming a scholarship player.

“They really did what they could for me to be able to come to this school,” Darden said of his parents. “We took a risk of coming here and playing here and me not producing and not getting that scholarship.

“They just put it on me. Do I still want them to struggle and keep paying? Or am I going to go work my butt off and earn something?”

Darden redshirted in 2015 and was set back the following year by a preseason injury. He recovered and appeared in five games as a redshirt freshman in 2016, grabbing interceptions in wins against Marshall and North Texas.

Brohm left WKU in December 2016 to take over at Purdue, and he was replaced by Sanford. The new coach and his staff immediately took a liking to the scrappy defensive back.

A scholarship came open last year during fall camp and Sanford knew how to fill it. At the beginning of an Aug. 14, 2017, practice, Sanford gathered the team and told them Darden wasn’t a walk-on anymore.

“When we put CoCo on scholarship, we felt like he deserved it as a person and as a football player,” Sanford said.

The team posted video of the moment when Darden was told he was on scholarship. He collapsed to the ground overcome by emotion while his teammates celebrated.

One year later, Darden reflected on that August day and said it was a life-changing moment.

Darden worked to obtain that scholarship. Now his motivation is proving why he deserved it. It’s a driving force behind everything he does in the weight and meeting rooms and on the field.

“Before, you’re going to practice and grinding,” Darden said. “That scholarship is on your mind. You’ve got an extra chip on your shoulder trying to get that.

“Now you have that and it’s college football, it’s D-I. You can lose that scholarship at any moment. Each and every day, you’re going out there to keep that scholarship. That’s just building me into a better player and making me tougher. I have no choice but to get smarter out here on the field and make more plays, become the best player I possibly can.”

Darden has the advantage of playing a position that perfectly suits his talents.

White employs a 4-2-5 defense, and nickelbacks play a vital role. They’re asked to come up to the line of scrimmage and play the run, defend slot receivers in man-to-man coverage, cover the flats in zone defense and sometimes get after the quarterback on blitzes.

The WKU DC said nickelbacks are hard to find on the recruiting trail because the position requires so many skills.

“It’s very important because that guy has to be able to do multiple things,” White said.

Linebacker Ben Holt said Darden plays the position with an instinctual feel. His football IQ helps him be in the right position to make plays from that nickelback spot.

“You watch him, and his instincts are insane,” the redshirt junior Holt said of Darden. “He just knows how to play football and loves playing football. He’s a special player, very fun to watch.”

Darden is one of four starters back for WKU in the secondary along with cornerback DeAndre Farris and safeties Drell Greene and Devon Key. Corners Roger Cray and Dionte Ruffin and safeties Kyle Bailey and Antwon Kincade – all sophomores – add depth to a talented position group.

That figure is impressive considering WKU ranked all the way down at No. 123 in sacks (12). That means Darden and his fellow DBs were able to prevent big passing plays despite opposing quarterbacks getting plenty of time to throw.

Coaches expect another strong season from the Toppers’ defensive backs, including Darden.

“His production throughout spring, throughout training camp, his consistency has been the main thing,” White said. “He’s a vital part of this whole team.”

Darden wants to increase his productivity from last year and for his team to find more success in 2018.

Rebounding all the way to another C-USA championship is the goal for Darden.

“I just want to do whatever I can to help this team win, whether it’s on defense, on special teams, in practice, in the classroom or out here in life,” Darden said. I just want to be the best I can to get us on the right path, so we can end up getting that championship.”

Darden hasn’t forgotten where he came from. He has plenty of support from Russellville in the stands at Houchens-Smith Stadium each Saturday, and he closely follows the Panthers under new coach Mikie Benton, one of his mentors.

After his playing career ends, Darden wants to work as an athletic or personal trainer and help young athletes in this area.

Darden knows there are young athletes from small towns who are looking for their chances just like he was not long ago. He hopes his story inspires them.

“I just want to let everybody know, all the kids know that they can do it,” Darden said. “Class A, not 6-foot, they can do it. It’s a blessing.