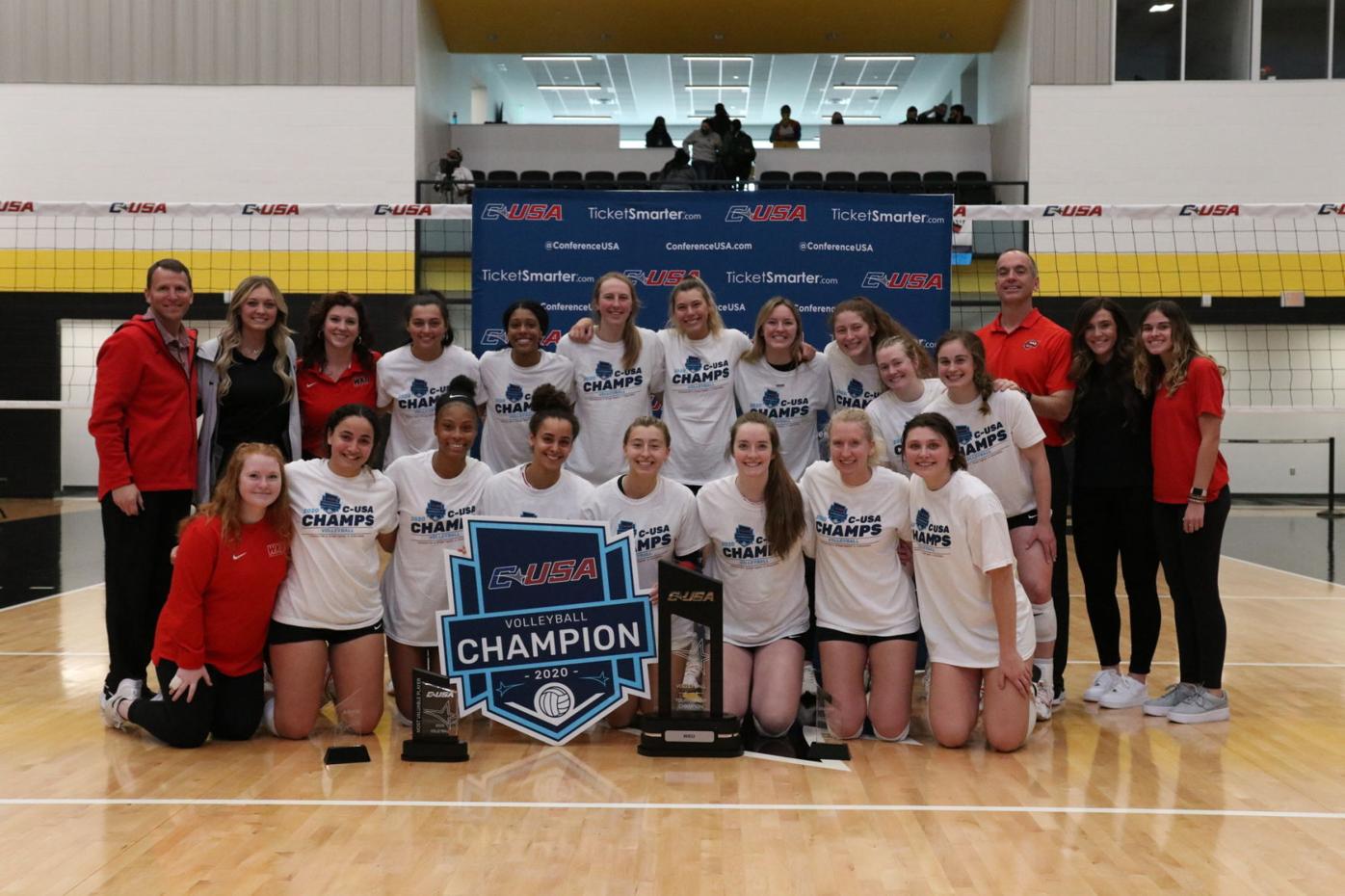 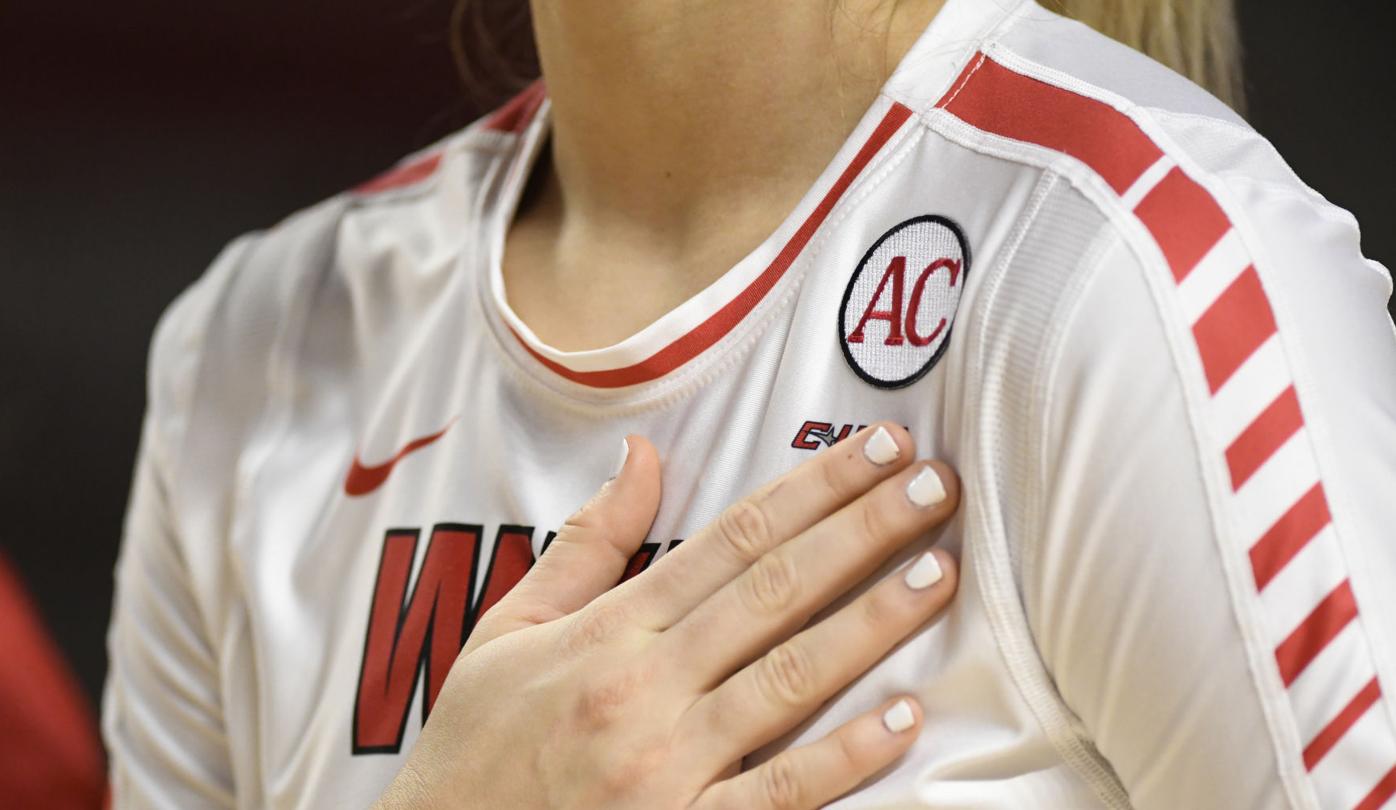 Western Kentucky wore "AC" patches on its jerseys this season to honor Alyssa Cavanaugh, a former player who died Dec. 25, 2020. 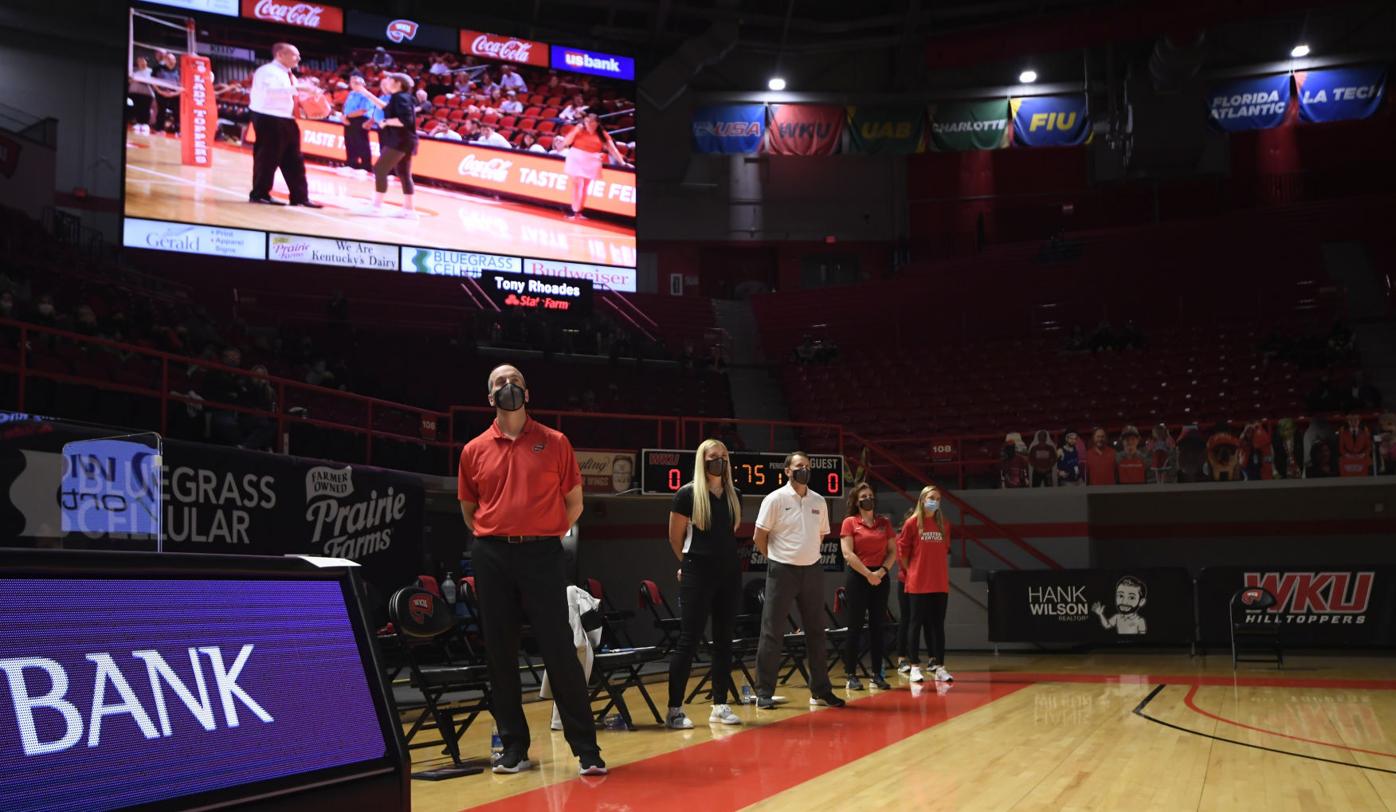 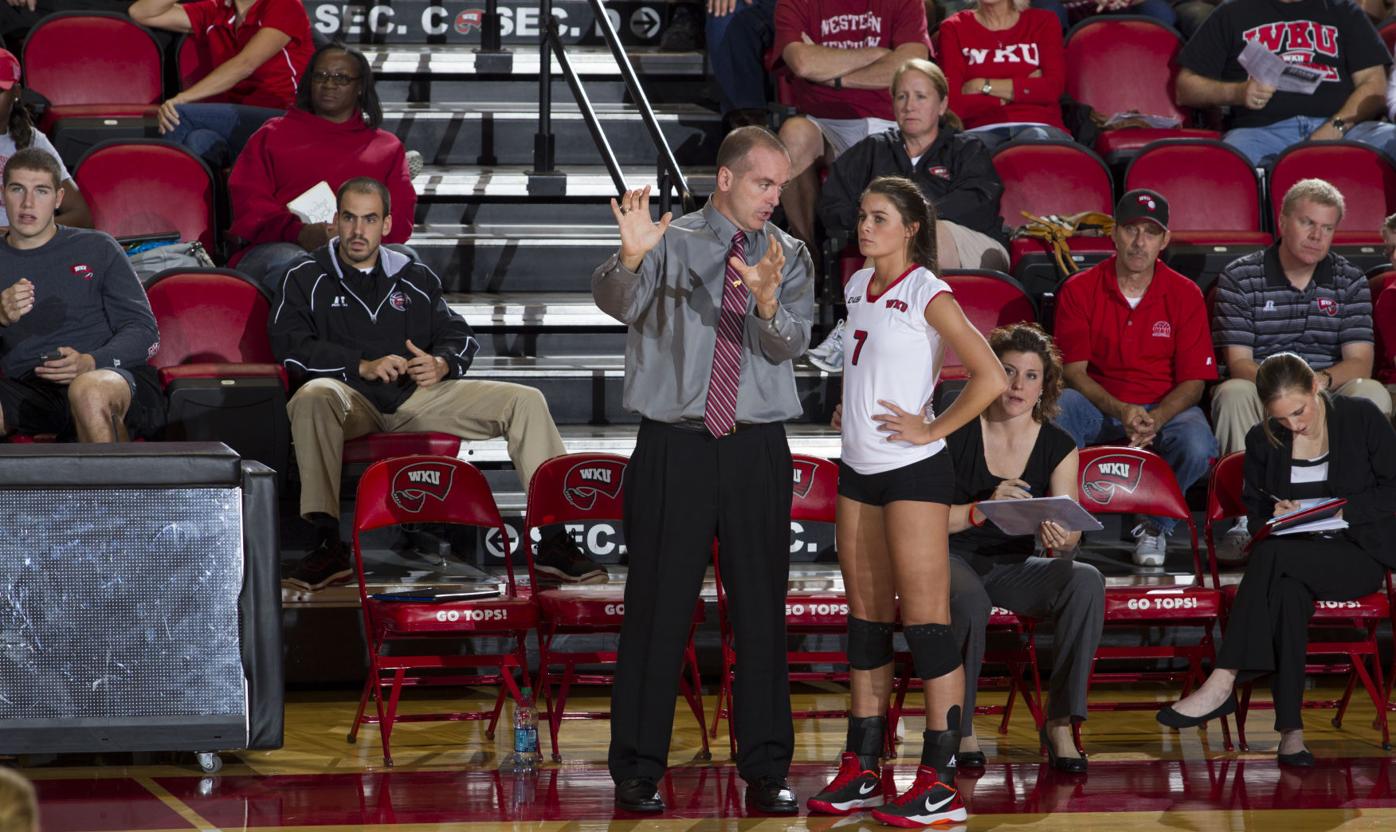 Western Kentucky volleyball coach Travis Hudson talks with players April 19 before practice at the auxiliary gym in E.A. Diddle Arena. Hudson was recovering from a heart attack he suffered March 31, 2018. 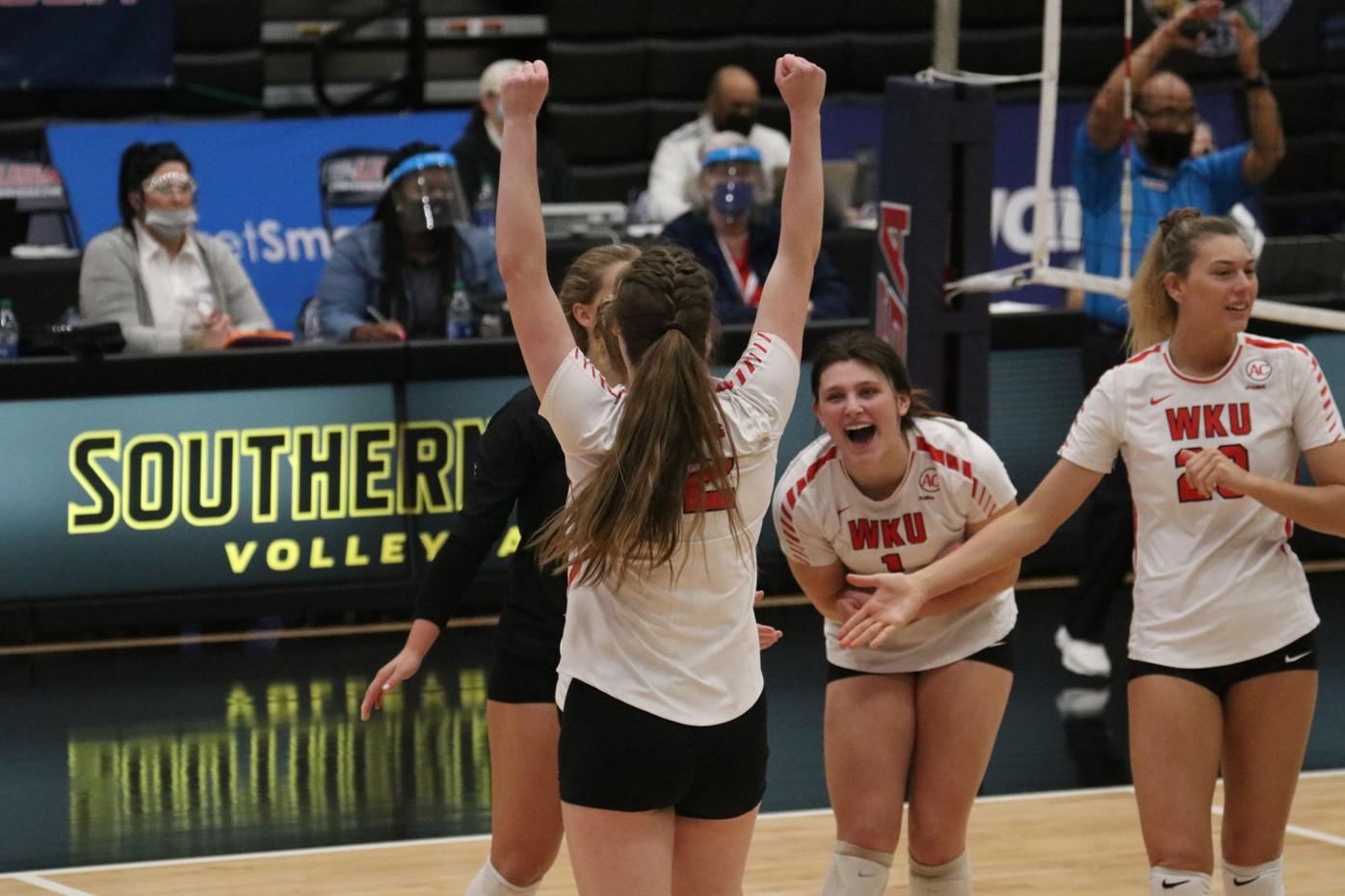 Western Kentucky held its first practice ahead of the Conference USA Volleyball Tournament on Wednesday after arriving in Hattiesburg, Miss., the day before.

Travis Hudson, in his 26th season as the program’s head coach, went out for a four-mile run following the session. Later that evening, as he was on the phone with his wife, Cindy, he reflected on that day – March 31 – three years prior. On Saturday, when the tournament was over and his team was celebrating, Hudson stood alone against the wall of the Southern Miss volleyball facility with tears in his eyes.

The Lady Toppers’ 3-1 victory over Rice gave the program its second straight C-USA title and sixth in seven tries since joining the league.

It came at a special time in an unusual season, and it came in a special city.

The regular season wasn’t normal by any means.

In the fall, the NCAA elected to move the volleyball season to the spring amid the COVID-19 pandemic, but conferences were still allowing matches in the fall.

C-USA moved its championship to the spring, but WKU was still looking to get games in. It scheduled a match against Mercer, but it was canceled shortly thereafter. WKU did get two matches in – sweeps over UAB and Middle Tennessee on Nov. 7, the latter of which was an exhibition.

After a 78-day layoff, WKU took its 1-0 record to the spring, where it continued its undefeated campaign. The Lady Toppers were unable to schedule their typical high-caliber conference opponents, but won four tune-up matches before league play. WKU dropped just one set combined in the stretch – against Mercer – and rolled through its first five matches of C-USA play before falling behind 1-0 after the first set in its second match at Marshall. It turned out to be the only regular-season set WKU lost against a league opponent.

The only other set WKU lost was in a 3-1 home victory over West Virginia. The Mountaineers took the first 25-23, but the Lady Toppers rolled from there for their first-ever victory over a Big 12 team. Hudson was without his staff for the match due to contact tracing, as well as libero Logan Kael due to a concussion.

WKU locked up the C-USA East Division title by sweeping its series at Middle Tennessee the next weekend, then swept Old Dominion in the first two matches ever between the two programs.

The Lady Toppers then stayed unbeaten with victories over North Texas, UTEP and Rice in the league tournament

“It hasn’t been easy. I know that sounds strange when you’re 21-0, but this has been the most difficult season I’ve ever been a part of,” Hudson said. “Our players have had to grind every day to get through it and it has not always been fun, but they’ve always been together. I love them. I’m proud of them. Players win championships, and they won one for their old coach this weekend.”

Western Kentucky joined Conference USA on July 1, 2014, and has been dominant since. After Saturday’s victory over the Owls, the Lady Toppers are 126-7 against C-USA opponents with six regular-season titles and six league tournament titles in seven seasons.

WKU wasted no time making its presence felt once it joined the league, posting a 30-6 overall record and a 15-1 mark in C-USA play in 2014. The one loss came at UTSA on Oct. 17, 3-1, and the Lady Toppers were dominant after. WKU dropped just three sets in eight matches the remainder of the regular season, before packing their bags for the league tournament – played in Hattiesburg.

The Lady Toppers swept Florida Atlantic and North Texas in the first two matches, before beating Rice in five sets to claim their first C-USA tournament title. WKU was led in kills that season by a 5-foot-10 freshman outside hitter from Louisville – Alyssa Cavanaugh. She posted 411 on the season, with 43 coming in the league tournament and 17 in the championship victory.

It started a run of four consecutive league titles, and Cavanaugh ended her career as one of the most decorated WKU volleyball players of all time. She was a four-time All-American, helping WKU to a 123-17 combined record and becoming part of a class which was the first in program history to appear in the NCAA Tournament each year of their career.

After graduating in 2018, Cavanaugh traveled overseas and competed in a professional tryout before being diagnosed with acute lymphoblastic leukemia on Sept. 5, 2018.

And on Saturday, in the city where Cavanaugh and WKU started its run in C-USA, it won its latest title.

“This one’s been really special to me. I think it’s kind of bringing things full circle with me a little bit,” Hudson said. “I got pretty emotional after the match because, when we joined Conference USA seven years ago or whenever it was, that first year the conference tournament was in Hattiesburg, Mississippi, and I had a little freshman outside hitter named Alyssa Cavanaugh that was on that team. She was just a little green freshman – her and Jess Lucas and Sydney Engle, they were all freshmen – and we rolled in here and found a way to win that tournament in our first year in the league.

“I have felt her presence a lot down here this weekend. It was really special to win again in that city.”

Three players – Taylor Bebout, Hallie Shelton and Kayland Jackson – were freshmen in 2017 when Cavanaugh was a senior and WKU won its fourth C-USA title in as many tries. Lucas, a senior setter in 2017 and Cavanaugh’s best friend, returned to the program as an assistant coach this season.

WKU revealed special “AC” patches in the spring opener to honor Cavanaugh – not remember her. That’s because, according to Hudson after the first matches wearing the patches, “If you honor Alyssa, then you play the game in a certain way – you play it with joy and you play it with competitiveness – and I wanted our players to represent that, and to me that honors her legacy more than just remembering who she was.”

The Lady Toppers went an undefeated 18-0 in the regular season, winning three matches in three days in Hattiesburg. Doing it while wearing Cavanaugh’s initials made the feat even better.

“After the match, we saw Travis get a little teary eyed over there and we were like, ‘We need to go hug him,’ and we started hugging him and he told us he was getting emotional because this was for Alyssa because her freshman year they won it here as well. It comes full circle. I don’t think it’s a coincidence we won it here again, and I think it was for her.”

When Hudson was on his phone with his wife Wednesday, he was reminded of what occurred that day three years earlier.

He had a Saturday off, was doing yard work and had to make a trip to Lowe’s. He felt out of breath by the time he reached the end of his road, and his chest started “burning and hurting” and his arms “really started to ache,” he told the Daily News afterward. He went to TriStar Greenview Regional Hospital, told the ER receptionist his symptoms and was attended to.

He was having what is known as a “widow-maker” heart attack, and was later informed the survival rate is 12%.

After being admitted and having routine tests, a team of medical professionals rushed in. He later learned that a piece of plaque lining one of his arteries flaked off and flapped over, which cut off blood flow to his heart. Doctors made an incision into his upper thigh and used a wire to snake a stent up to the artery that was blocked. It took just 53 minutes from the time he walked in the door until the procedure was completed.

“I told (my wife), I was like, ‘Wow, I just got back from a four-mile run,’ and it took me back. I thought, ‘Here I am sitting in Hattiesburg at the conference tournament with one of the best teams in the country and three years ago today I was laying in the ICU with a 12% chance of survival from that heart attack,’ ” Hudson said. “That’s a pretty big change over the course of three years.”

Hudson – who was back on the bench watching his team a week later in Louisville as part of its spring session – hasn’t changed much in his approach, he says, but says it has probably made him try to enjoy things more and be more grateful. His players haven’t seen much change, either.

“We were all scared to death,” Shelton said. “I remember things were a little different when he came back right after that. He had to kind of keep it easy and stuff like that, but as the years go on and stuff, he’s the same old coach, he has the same fight, he has the same grit and determination and passion for coaching us and love and trust in us. I don’t think anything’s changed with him, but I really do specifically remember that moment. It was pretty crazy, but he’s the same old coach.”

The following 2018 season was a down year by WKU standards. The Lady Toppers went just 20-10 and lost in five sets to Southern Miss in the opening round of the C-USA Tournament – the only year since joining the league it didn’t win the title.

Since then, WKU hasn’t lost to a C-USA team. The Lady Toppers went 32-2 overall in 2019, with the only two losses coming to Louisville – the latter in the second round of the NCAA Tournament, which was being hosted for the first time by WKU with 5,023 fans in attendance at E.A. Diddle Arena.

Now, Hudson’s 2020-21 team of C-USA champions, which is currently ranked 19th nationally in the latest AVCA poll, will take its undefeated record to Omaha, Neb., for the NCAA Tournament that’s scheduled to be played April 14-24.

But the latest victory was one to be cherished. In the most trying of his 26 seasons as WKU’s head coach, a pandemic forced Hudson and his team to play its first ever spring championship, and around the anniversary of a near-death experience in the city where the program’s run of C-USA success started with its late superstar seven seasons prior, the Lady Toppers got the job done again.

“Because we win one one year doesn’t mean we’re going to win one the next year. I know fans think we’re just going to keep churning them out year to year, but it doesn’t work that way. You start all over and you build again and you try to be special again,” Hudson said. “We just happen to be in a stretch here where I have to be eternally grateful because there’s a lot of good coaches and a lot of good teams out there and there’s plenty of coaches out there that can coach this game at the level that I do.

“Why I’m in the middle of this stretch of success, I’m not really sure, but what I do know from three years ago is God left me here for a reason, and every day I just want to make sure our players understand how much I love them and that I’m here to watch them and help them grow in every part of their life. If we win some trophies along the way, then that’s just a bonus for me.”

The Western Kentucky volleyball team is the Conference USA champion once again.