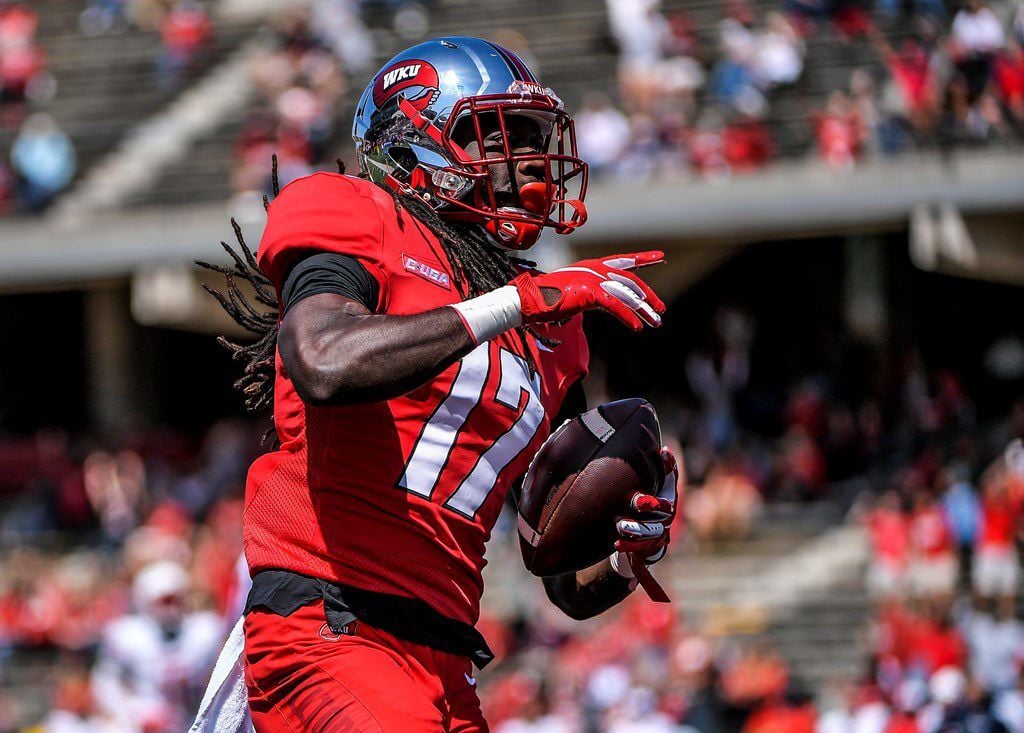 Western Kentucky’s Dalvin Smith celebrates Saturday after scoring a touchdown in the third quarter against Liberty at Houchens-Smith Stadium. 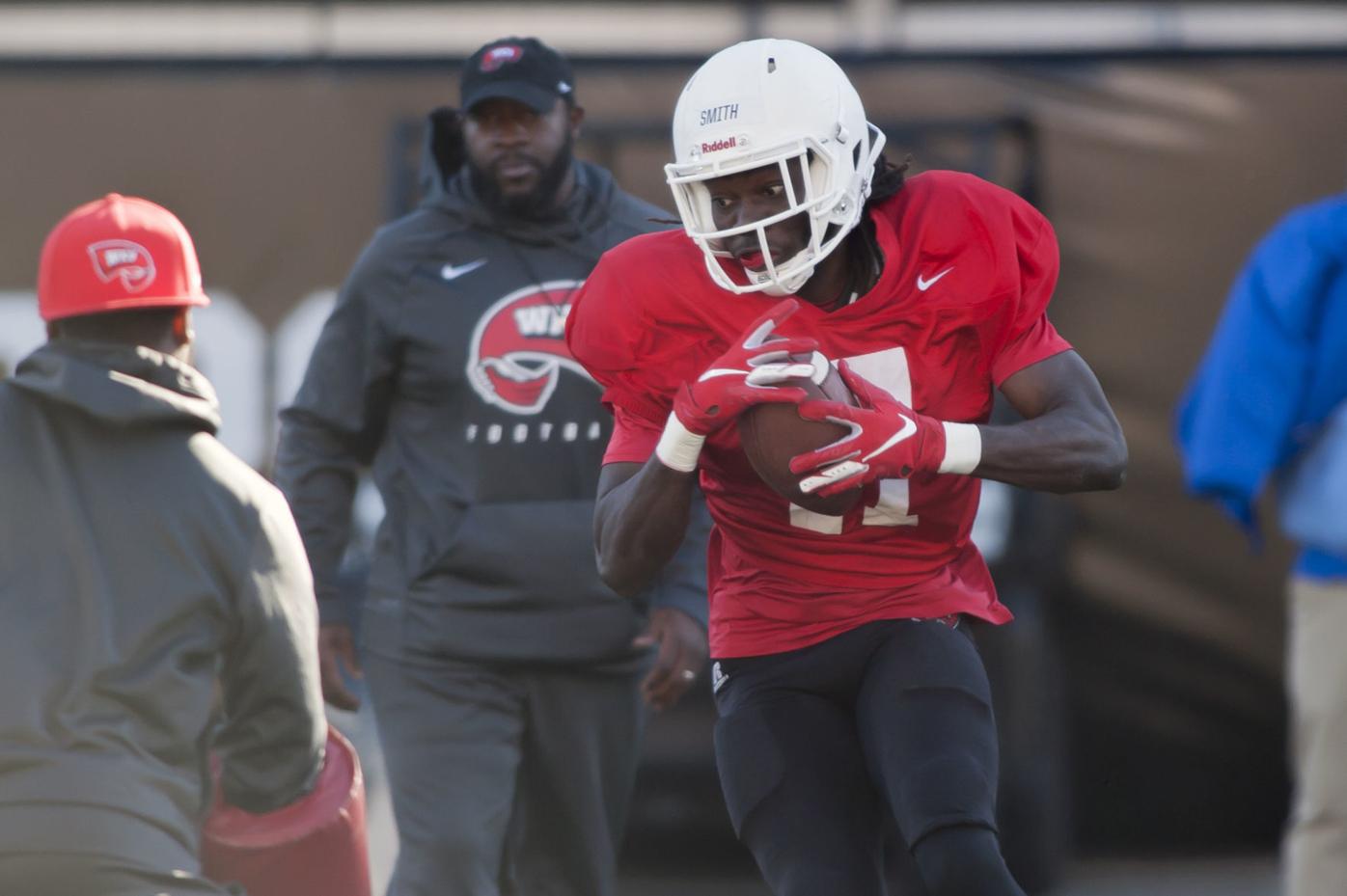 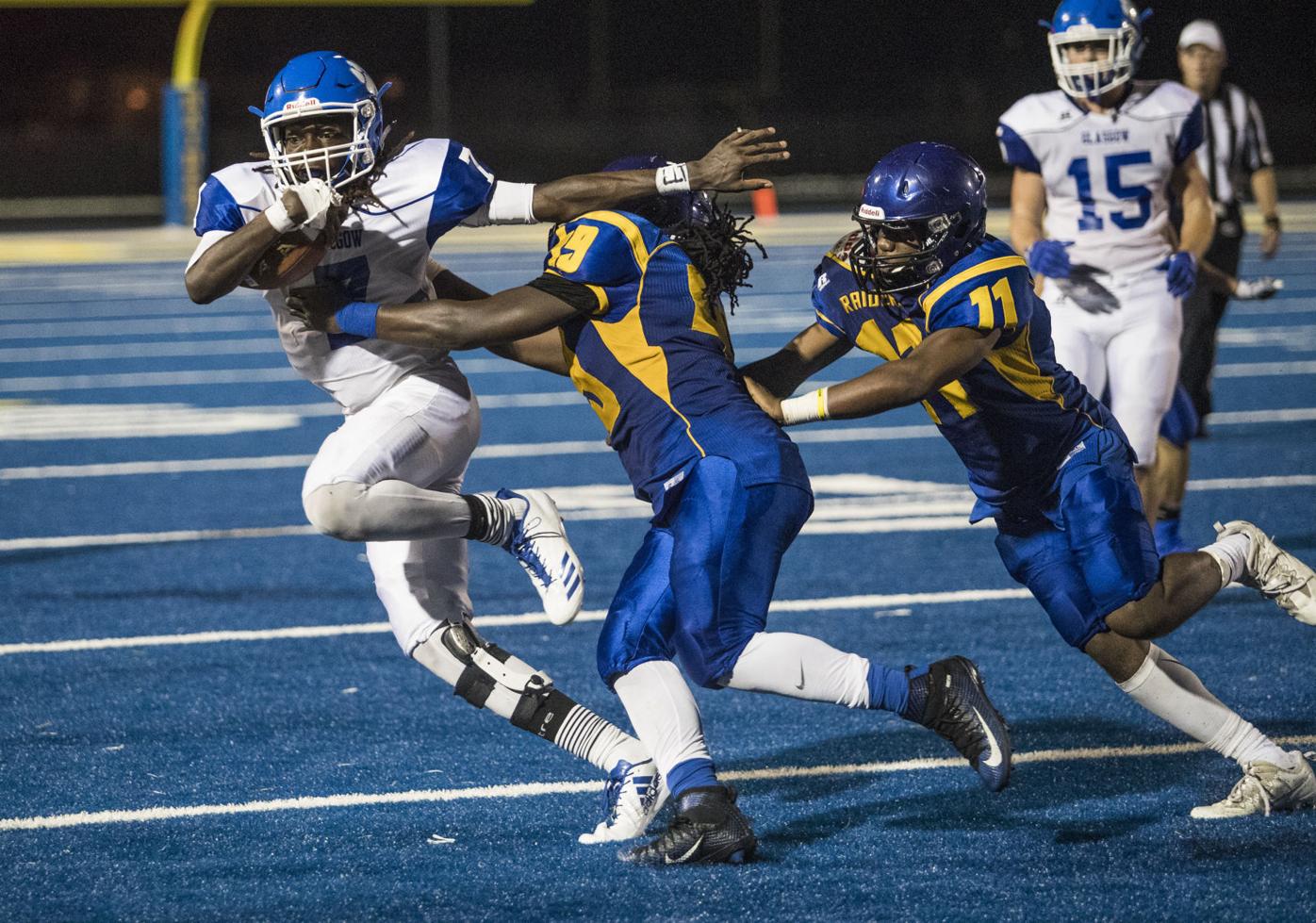 It had been nearly three years since Dalvin Smith’s last touchdown reception at Glasgow High School.

The then-senior grabbed a 90-yard pass from then-sophomore quarterback Tanner Abernathy as part of a 21-point second quarter against Monroe County during a 40-14 victory in the KHSAA Class 2A state quarterfinals.

On Saturday, he got in the end zone again – this time for Western Kentucky

Smith scored on a 24-yard reception from Tyrrell Pigrome during the third quarter of the Hilltoppers’ 30-24 loss to Liberty at Houchens-Smith Stadium.

“It felt pretty good, honestly,” Smith said. “But there’s many more to come.”

For Smith, the play had been a long time coming.

His sophomore season with the Scotties was cut short by a knee injury five games in after he tallied 107 yards on nine receptions. After recovering from that injury and being ready for his junior season, Smith sustained another injury leading into his junior year.

Smith returned his senior year and did it all for the Scotties. He started the season at quarterback and threw for 916 yards and 13 touchdowns on 66-of-137 passing, before Abernathy took over primary quarterback responsibilities in mid-October. Smith rushed for 433 yards and six touchdowns on 41 carries that season, and caught 16 passes for 400 yards and seven touchdowns. Defensively, he had 22 tackles and three interceptions.

“He played quarterback six, seven games and then we moved him to receiver and he played receiver the last six games,” Glasgow coach Jeff Garmon said. “... Going into college he had only played receiver a matter of like six, seven, eight games.”

Despite limited time able to play in high school, he signed with the Hilltoppers in February 2018, and grayshirted while takes classes at WKU’s Glasgow campus. Garmon says he went in around 170 pounds, with a focus on gaining weight. He joined the team the following winter and practiced with a receiver group with nine returners in the spring of 2019, before later being moved to tight end.

“It says a lot about his talent,” Garmon said. “People could see he had talent. He just didn’t have the size where he really needed it to be at the moment in time. Western saw something in him.”

He appeared in four games last fall, mainly on special teams, and redshirted.

On Saturday in his first game of the season, Smith – who’s now listed at 6-foot-3, 195 pounds – got in and made a play on an important drive.

He finished with two receptions for 26 yards in the game, and both came on the Hilltoppers’ first possession of the second half. He caught a 2-yard pass to get WKU to Liberty’s 24, and then received a ball from Pigrome while he entered the end zone unguarded.

After the play, Smith pointed to the sky, had a celebratory chest bump with fellow tight end Joshua Simon and sprinted to the sideline where he met more teammates.

His high school coach watched as one of the 4,276 in attendance at Houchens-Smith Stadium.

“The thing that caught my mind was just seeing how happy he was,” Garmon said. “He seemed really happy and seemed excited and that’s what it’s all about for me.”

The play drew WKU even with the Flames at 17-all, but the Hilltoppers were unable to keep the lead and eventually lost for the second time in as many games.

“I think Dalvin’s a talented player. I think he’s got a good role on the team and I was happy to see him catch that touchdown today,” WKU head coach Tyson Helton said. “He’s another part of the offense. He has a skill trait that we can use and when his plays come, we’ll try to get the ball to him.”

WKU’s offense, which struggled early in its season-opening loss to Louisville and again Saturday against Liberty, started to find a rhythm somewhat during the loss to the Flames. Smith believes the Hilltoppers can make improvements in the passing game, and he’s hoping to be a part of that like he was during the opening drive of the second half Saturday.

“I’ve just been waiting my time here,” Smith said. “I redshirted last year, so I knew I wasn’t going to be getting a lot of playing time, but I’ve been waiting.”

Garmon knew it would take a couple of years for Smith to get to this point, but he’s not surprised. While not able to watch a full high school career because of injuries, the potential was clear at Glasgow.

“He’s just a super kid, hardworking kid that’s persevered, worked and is getting an opportunity,” Garmon said. “I knew it was going to take a couple years, but if he can ever get a year under him playing all the time, I think the sky’s the limit for him with the potential that he has.

“You just don’t ever underestimate Dalvin. Dalvin always surprises people. He’s got a great attitude, he’s always smiling, he seems like a happy kid and works hard. He’s earned everything that he’s got.”{&end}